The build up to one of the most anticipated  team-ups has reached a new peak, as what may very well be the official logo to The CW’s upcoming “Arrow and Flash” crossover has been revealed, as posted by DC Entertainment’s very own Chief Creative Officer and scribe Geoff Johns on his personal Instagram account.

However, according to Comic Book.com, the logo could be the work of illustrator David M. Jones, whose illustrations have had a reputation of being mistaken as the genuine article. While Johns has not mentioned anything regarding the authenticity of the logo, it’s also not confirmed whether it’s Jones’ work as well.

Whether it’s an official teaser or not, the logo is still a mighty cool teaser to see, especially with Arrow Season 3 going strong and The Flash’s first season steady as she goes.

- Advertisement -
Both shows have featured links to each other on earlier episodes that slowly plant the seeds of the inevitable crossover special, such as Barry Allen running to Starling City to talk to Oliver Queen to get advice on heroics, and Felicity Smoak visiting Central City to get reacquainted with Barry since waking up from his comatose state. The convergence between both heroes is inevitable, and will happen just before both shows go on their mid-season breaks just before the holidays hit this December. 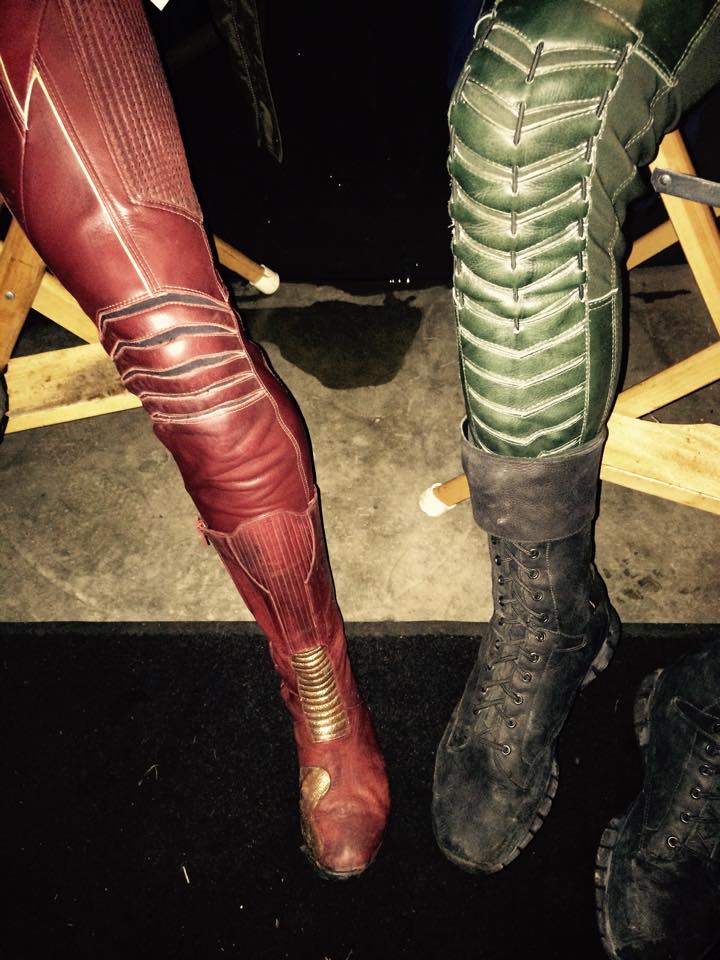 The crossover special, spanning two-hours on both shows, begins with The Flash and the eighth episode of the show entitled “Flash Vs. Arrow“. Will something happen between the Scarlet Speedster and the Emerald Archer that will have them butt heads, or will they inevitably team-up together and go all “Brave and the Bold” against a common enemy? Time will tell eventually. Look forward to Stephen Amell’s Oliver Queen/ Arrow and his team coming across Grant Gustin’s Barry Allen/ The Flash and his friends on the eighth episode of each respective show.

The Flash airs every Tuesday and Arrow every Wednesday on The CW, and on their respective international channels and affiliates on their appointed scheduled dates.