It’s October again, and that means that ghastly monsters and all kinds of horrific nightmares are edging out of the woodwork to celebrate the coming of All Hallow’s Eve on the 31st. It’s also proven to be a good month for fans of AMC’s “The Walking Dead”, as it’s literally “zombie season” whenever that show returns with a new batch of episodes that chronicle the continuing struggle one former police officer and his band of survivors have in a post-apocalyptic world filled with the undead.

That being said TWD is back for its record-breaking sixth season, and we find Rick Grimes, Daryl Dixon, Michonne, and the rest of their group acclimating to a new community while facing tensions and new threats besides the living dead. It’s been a long and hard journey of survival for these characters we’ve come to know and love since the series premiered in 2010, and now it’s come to a point where everything once familiar is suddenly brand new, and the dangers of the zombie apocalypse pale in comparison to the ever constant threat and unpredictability of humanity’s desperation to do anything to live.

So welcome to the RECAP edition of the very first episode of The Walking Dead Season 6, which is aptly titled “First Time Again”. Get your SPOILER CAPS on, this one is going to be filled with highlights from that season premiere.

If you’re not up to speed with The Walking Dead or what the show is about, here’s a bit of a primer for your convenience – It’s based off the critically acclaimed ONGOING comic book series written and created by Robert Kirkman, and centers on a Former Sheriff’s Deputy named Rick Grimes who is injured in the line of duty and falls into a coma… Only to wake up to a world that is nearly overwhelmed by the living dead. Understandably disoriented and confused, Rick is helped and rescued by a man named Morgan Jones and his son Dwayne, who nurse him back to health and bring him up to speed on events concerning the zombie outbreak. Eventually Rick strikes off and successfully finds his family, joining another group of survivors that are led by his best friend and partner Shane Walsh.

While the zombie outbreak serves as the backdrop of the story, The Walking Dead revolves around the interpersonal conflicts, drama, and relationships Rick and the other characters share with one another, as well as what humanity will do in order to stay alive while searching for a safe haven. Months slowly turn into years, and the experiences the group go through range from finding provisions and a prison to combating sick and twisted people like The Governor and a group of cannibals who hunt other survivors for food. It is these situations, as well as the ever constant threat of the undead, that gradually harden Rick and turn him into a formidable leader that is not willing to take chances. He and his “family” of survivors eventually land in Washington DC and are welcomed into the “Alexandria Safe Zone” community, where their skills are seen as resources needed to keep everyone living there alive and in one piece.

So now we come to the new season and current situation in TWD – Rick Grimes has essentially proven himself and his views to the people of Alexandria after a tragedy in the Season 5 finale saw community leader Deanna lose her husband to an unstable member Pete, whom Rick executed without hesitation. Arriving just after that incident is Rick’s long lost friend Morgan Jones, who has taken a new approach towards life and also joins the Alexandria community after meeting and saving Daryl Dixon and Aaron. Seeing that the Alexandrians need to be strengthened and trained, Rick and his friends volunteer to show everyone the ropes… But a new problem presents itself when they all discover a canyon filled with thousands of zombies which could spill over and threaten the safety of their community.

In an effort to come together and eliminate any potential threat, Rick hatches a plan to guide all the walkers out of the canyon and lead them away from Alexandria. This initially divides opinions between residents of the Alexandria Safe Zone, and men like Carter question Rick’s position, seeking to eliminate the former police officer if necessary. However Rick catches wind of Carter’s planned mutiny, and manages to put that discussion to a close and unite the people for his proposition to get the walkers away from their home. The entire episode then showcases present events and flashbacks that lead to and happen during the entire operation, with Rick, Morgan, Michonne, Daryl, and the rest having to deal with more than what they bargained for… Especially with a cliffhanger of a sequence that leaves everyone questioning how Alexandria will fare afterwards. 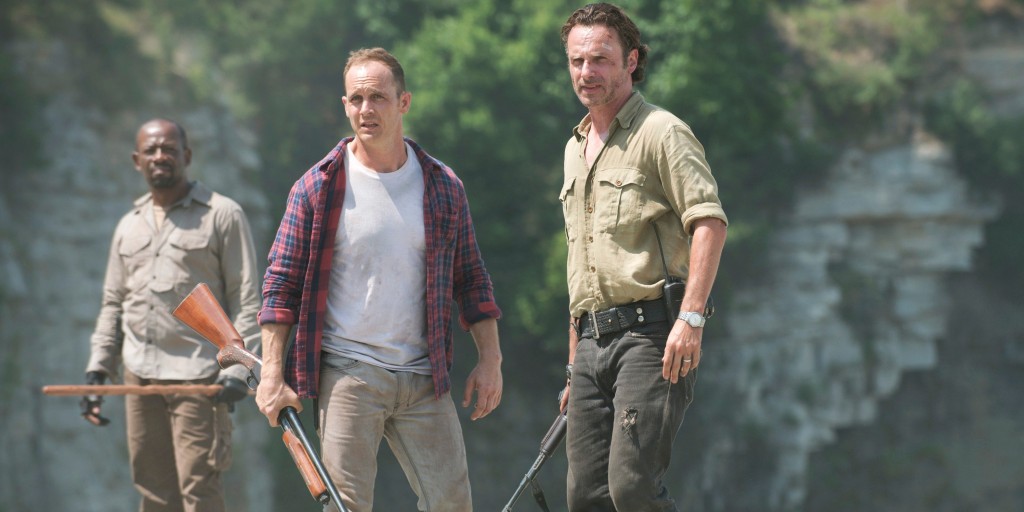 So there it is… The Walking Dead has returned, and a stellar cast that has thrived for five past seasons look like they haven’t lost their edge at all in dealing with zombies and then some! Leading man and English actor Andrew Lincoln is back as the ever changing lead protagonist Rick Grimes, and his new hardened outlook in keeping people safe is tested by the returning Lennie James, who returns as his old friend Morgan Jones – a man who is now peaceful yet combat proficient in dealing with threats that live in a world filled with the undead. Several other members of the cast, including Norman Reedus’ Daryl Dixon, Steve Yeun’s Glenn, and Melissa McBride’s Carol, are just on top form, and the show also welcomes newcomers like Corey Hawkins’ Heath, all of which just add more human element and tension whenever zombies or other threats enter the picture.

The title of the episode alone, “First Time Again”, focuses on Rick and Morgan meeting again as their new selves, as well as the community of Alexandria “starting fresh again” as they follow the lead of Mr. Grimes and his experienced group. If you love this show and enjoy watching it, the drama and gore hand in hand, and this first episode premiere of a new season doesn’t skip a beat and reassures all that we’re in for a tight ride yet.

The Walking Dead airs every Sunday on AMC, and on international territories like FOX Philippines on respective times and schedules.