November finally draws to a close today, and while the previous week did not have new episodes of Arrow and The Flash, this week will be very much different as the second to the last episodes before the mid-season break for both shows will give way to the next annual crossover between the Emerald Archer and Scarlet Speedster, as well as paving the way for The CW’s new spinoff series that will see Legends unite together against a common threat that endangers all of time itself.

That has yet to happen, and we haven’t even recapped the previous week’s episodes, where an injured Barry Allen recuperates as old foe Gorilla Grodd returns, and Team Arrow faces new developments with H.I.V.E, particularly a face that John Diggle very much recognizes.

SPOILERS coming up as we revisit the 7th respective episodes of The Flash and Arrow before “Heroes Join Forces” this week!

The last time we saw Barry Allen/ The Flash, he got his ass handed down to him by his newest speedster opponent Zoom, who barely left the Scarlet Speedster alive as he injured him severely and left him more or less paralyzed. Thankfully Barry’s metabolism heals fast thanks to his super speed… But his confidence is a different story, leaving the entire team and his friends very worried about his condition. 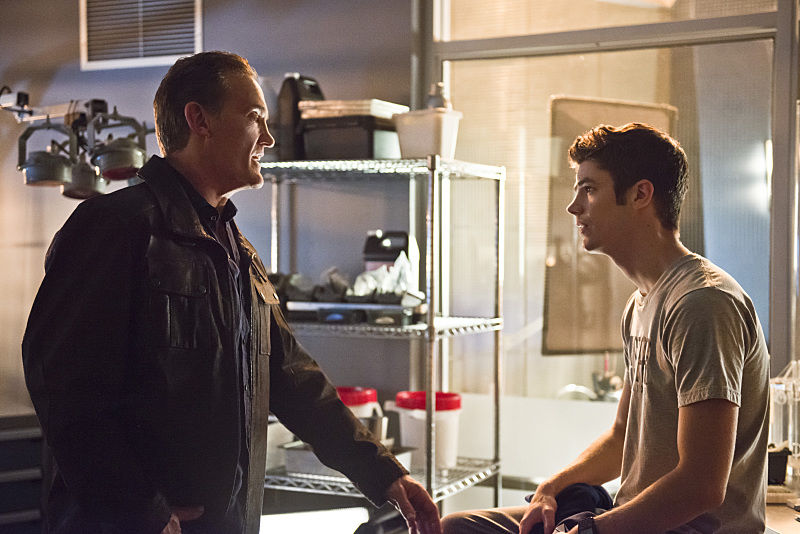 Thankfully Iris knows Barry better than he knows himself, and makes a phone call to summon Henry Allen back to Central City to help give a pep talk to Barry. This visit couldn’t have come at a better time, as Gorilla Grodd returns and starts wrecking havoc at different scientific establishments, controlling the minds of scientists and getting them to steal equipment that leaves Team Flash puzzled over the empowered creature’s intentions. 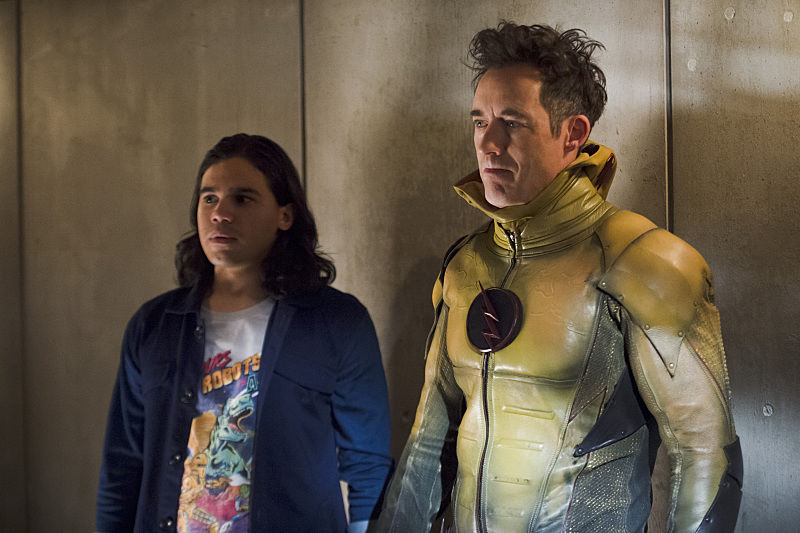 Meanwhile, Harrison Wells of Earth Two feels he has wrapped up business on Earth One after unwittingly putting Barry in harms way, and decides to pack up his stuff and face Zoom back on his own reality. Caitlyn Snow thinks otherwise, and tries to convince Harry to stay. It just so happens that this coincides with Grodd mind-controlling Caitlyn and capturing her for his biggest task yet – to recreate more Gorillas with the same level of intelligence and powers as he has. This leaves Team Flash desperate to come up with a plan to stop Grodd and save their friend… And Harry returns and works with Cisco to fool the ape by masquerading as his “father” and wearing the suit of Harrison Wells/ Eobard Thawne, aka The Reverse Flash. 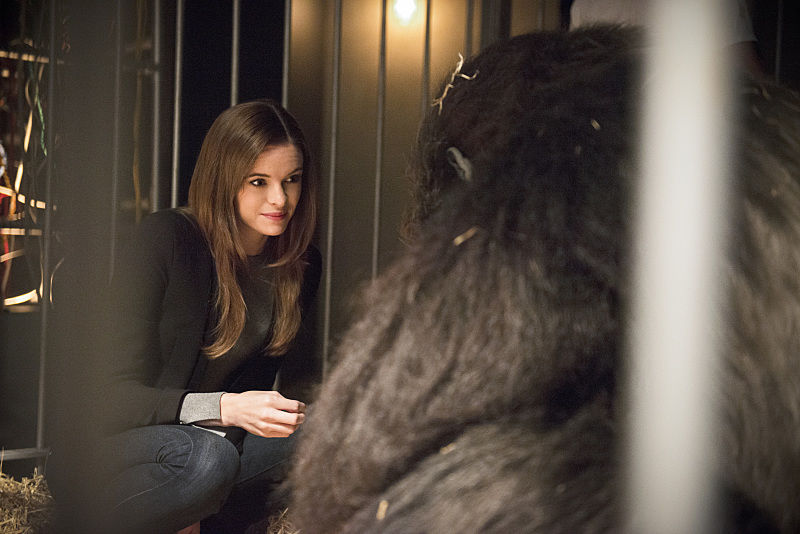 With the ruse in play, Harry manages to help Cisco save Caitlyn from Grodd, but that still leaves the Meta-Gorilla at large and a roaming threat. Thankfully Harry has a plan to send the creature somewhere where he can be at peace, so he helps the newly recovered Flash and his team set up a trap that lures Grodd to the “Speed Cannon” that can send him to a Gorilla preserve on Earth Two. They succeed, and Harry decides to stay and help Team Flash take on Zoom in the future. Meanwhile, Cisco finally has his date with Kendra, but his Vibe abilities make him see a vision of a man and woman with wings… What could that mean?

So this episode pretty much deals with Grodd and reassures us that Barry and his friends will be ready to deal with Zoom again… Plus that side tale setup to Legends was a pretty nice touch too.

After saving Ray Palmer and getting more resolve in putting a stop to Damien Darhk and his organization once and for all, Team Arrow steps up the game and fights back against H.I.V.E., but it becomes more obvious that their enemy is always one step above them. Add to the fact that John Diggle/ Spartan discovers that his brother Andy held some dirty secrets of his own and was ordered to be killed, and he is left to wonder if fighting for the memory of his sibling is actually the truth he knew or not. 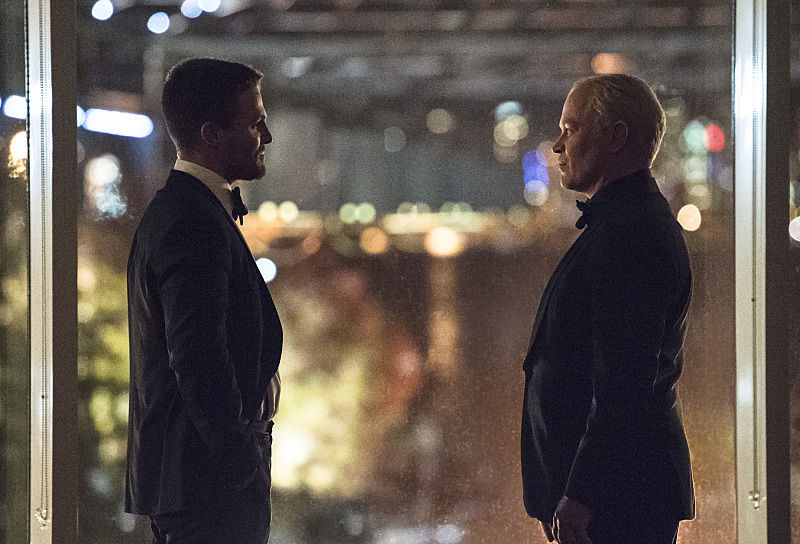 Meanwhile Oliver is confronted directly by Damien Darhk over his bid to run for mayor of Star City, and while threatened Mr. Queen has no intention of backing away anytime soon. Captain Quentin Lance’s role as a mole for Team Arrow also puts him in danger after Darhk starts sniffing treachery. After getting a lead on when they have one of their clandestine meetings on a dock, Green Arrow and Spartan manage to eavesdrop and make a shocking discovery… Andy Diggle is alive and working with H.I.V.E, leaving John puzzled and confused. 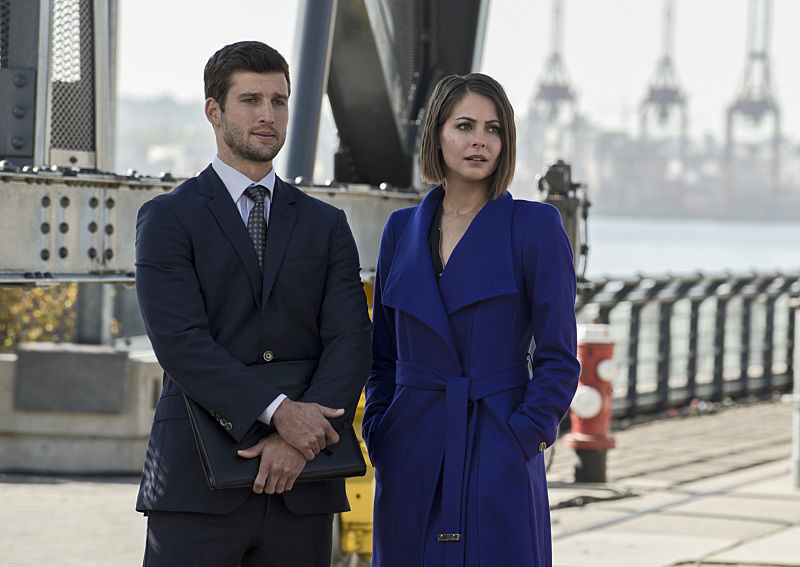 Meanwhile, Thea Queen/ Speedy tries to continue living a normal life – dating her friend and Oliver’s campaign manager Alex Davis and helping her brother run for mayor. Unfortunately the signs of her bloodlust return, and her father Malcolm Merlyn arrives in Star City to offer some “solutions” which she is opposed to pursuing. Felicity Smoak also tries to crack down some H.I.V.E. mysteries with the aid of Ray Palmer/ The Atom. Everything comes to a head when the team decides to track down H.I.V.E. and confront Andy. While at first vehemently against seeing redemption at saving his brother, Diggle decides to help his friends subdue and take his brother after a confrontation with the Ghosts. What’s more, Dahrk attacks and subdues Thea/ Speedy, only to suck out the “Bloodlust” rage that’s inside her instead of her life force which weakens the mystic user. Upon realizing this, she confides to Malcolm her discovery and sees it as a way to defeat Dahrk and get rid of her dark inhibitions. 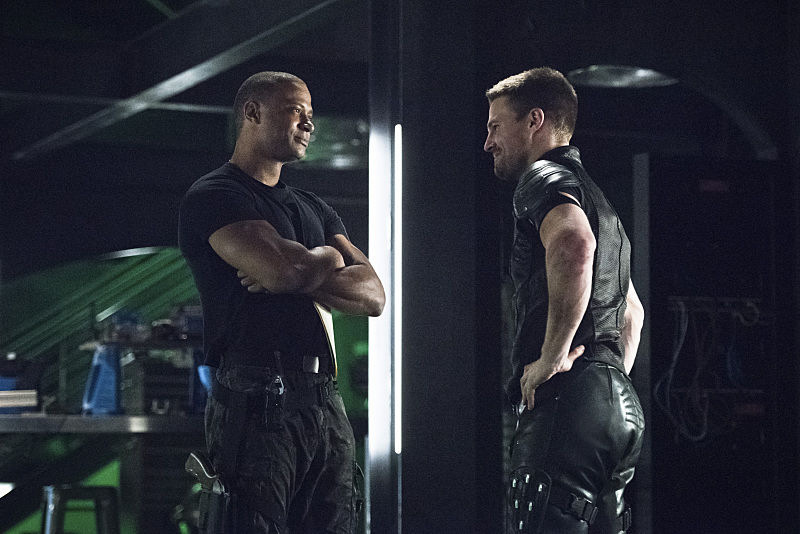 With Andy Diggle detained, John thanks Oliver and his friends for the assist before having a long overdue reunion with his brother. He learns nothing but disappointment when Andy confirms everything in the dossier about him is true. Oliver also continues his candidacy for Mayor, and makes a statement in the light to restore Star City Bay, which infuriates Dahrk as the hero predicted. Meanwhile, flashbacks on the island see Oliver dealing with Reiter’s army getting more complicated, as he unwittingly kills the brother of the woman he saved.

So Arrow is pretty much going strong in dealing with Darhk and H.I.V.E. while expanding the universe it started… And that will come to play much more in a big way when it does the crossover with Flash this week.

Catch The Flash every Tuesdays and Arrow on Wednesdays on The CW and on international channels on their respective schedules
- Advertisement -
Previous article
WATCH: Attack on Titan PS4/ PS3/ PS Vita Video Game gets February 2016 trailer
Next article
Sneak Peek for “Batman v Superman” Trailer #3 shows Batfleck in chains