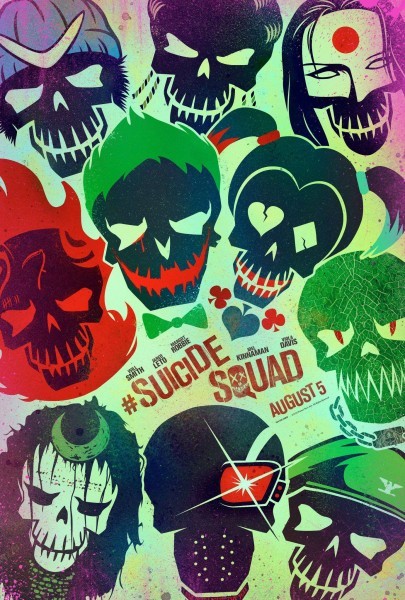 Making sure that the world doesn’t forget that there are a couple of anti-heroes and villains getting their own movie later this year, director David Ayer posted via his official Twitter page the first official poster released for the DC Cinematic Universe film “Suicide Squad“, which features the ragtag members of “Task Force X” – a government black ops group of assassins, criminals, and psychopaths who are forced to do dirty work and clean up missions in exchange for lighter sentences or their freedom.

Seen in the poster are the assembled skull face logos of the members of the squad and more – featuring Rick Flag, Katana, Slipknot, Diablo, Killer Croc, Boomerang, Enchantress, Deadshot, Harley Quinn, and The Joker. This new one sheet is also accompanied by various “character posters”, which can be seen at Comic Book.com as well.

The brand new Suicide Squad trailer will debut with the DC Films special in The CW, which arrives with the return of The Flash this Tuesday!

- Advertisement -
Previous article
Secret Wars comes to an end! Relive it with Marvel Legendary the Deckbuilding Game!
Next article
The Truth is Out There AGAIN with the Revival of X-FILES