WATCH: From the publishers of Ticket to Ride and Five Tribes, comes Quadropolis! 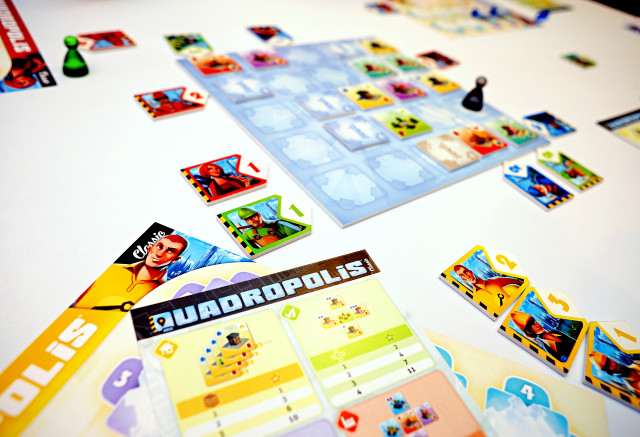 From a cross-country adventure across the USA, to the Land of 1001 Nights, Days of Wonder takes us to a different kind of setting in 2016 – the hustle and bustle of a busy metropolis!
In Quadropolis, players are mayors of neighboring cities who are competing to build the greatest city! To do this, players enlist architects who will help them procure buildings, before their opponents do so.

Quadropolis is divided into several grid-like boards which is the heart and soul of the game. Players will send architects to a communal 5×5 board to procure the building they need. The number indicated on the architect you send is important. It determines the exact position in the communal build site from where you’ll be getting a building AND also determines on which part of your own city you’ll be able to build.

If that sounded a bit tough to wrap your head around, don’t worry it took me a while to get it too. But once you understand it, the system is actually pretty intuitive. It seems Quadropolis continues the trend of meaty family games coming from Days of Wonder, which started with Five Tribes.

Depending on the kind of buildings you’re able to get, and how you’ve placed them in your city, points will be scored at the end of 4 rounds.

And if that’s not enough! Quadropolis will be shipping with two game modes: Classic and Expert! This is for players who have become familiar with the game and want an extra challenge!

To learn more about Quadropolis, watch this excellent preview video Days of Wonder has released on their website:

Watch out for Quadropolis in the 2nd quarter of 2016!