The Top 5 Game Announcements from GAMA 2016! More Smash Up and Legendary! But Eric Lang/CMON steals the show! 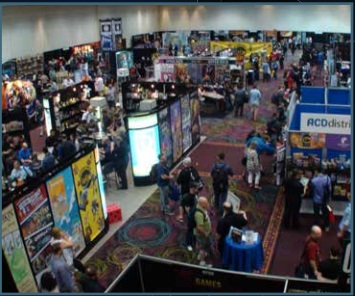 Every March, the Las Vegas strip gets to be a little geekier.

The GAMA trade show once again visits the desert strip from March 14 to 18. And in the next 4 days, board game publishers and industry personalities alike will gather to showcase their upcoming games for the year. GAMA presentations tend to be chock-full of juicy news as exhibitors reveal secret projects and talk about their latest updates.

And this year has been no different! Day 1 was already filled with big announcements coming from the major publishers like Cool Mini or Not (CMON), Fantasy Flight Games (FFG) and Upper Deck Entertainment (UDE).

Since we couldn’t be there this year, we’ve been scouring (edit: obsessively refreshing) the interwebs for the best news of the show so far. And so far, all the stuff have us screaming giddy.

And you know what, we’d like you to join in this screaming crescendo of giddiness.

Here are the Top 5 games of GAMA we think you should watch out for come 2016:

5. Smash Up: Cease and Desist (from AEG)

Barely has the presses cooled off on Smash Up’s latest expansion (It’s Your Fault), the good folks at AEG are already hard at work on the very next expansion hilariously entitled: Cease and Desist. No AEG is not involved in legal trouble. But they really stretch the envelope with this one! During their GAMA presentation, they revealed that Cease and Desist will come with 4 factions based on popular licenses: Star Roamers (Star Trek), Astro Knights (Star Wars), Changer Bots (Transformers) and yes, Ignobles (Game of Thrones). You’ve really outdone yourself this time AEG. I look forward to paying homage to the Starks by playing Ghost Ignobles (SPOILERS ALERT YO!) 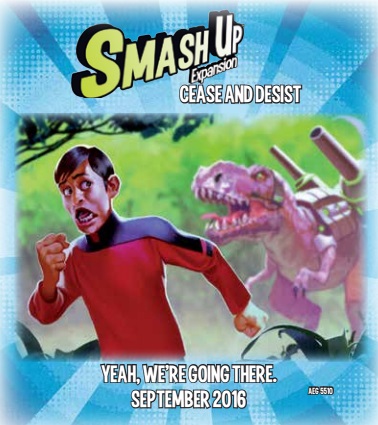 4. Gekido Bot Battles (from CMON)
This time coming from the CMON games twitter feed (@CMONgames), Gekido looks to be a robot game crossed with Pokemon! WHERE DO I THROW MY MONEY? A little bit of sleuthing led us to the Portuguese board game website Ludopedia, where the Brazilian-made game has a profile. It seems it uses poker combinations in order to perform fighting moves against your opponent, and can play 2-4 players! The poker combinations are reminiscent AEG’s Doomtown. But the possibility of 6 players leads us to believe we can play this with multiple players ala Royal Rumble! Combine that with CMON quality miniatures and well, a man can dream! 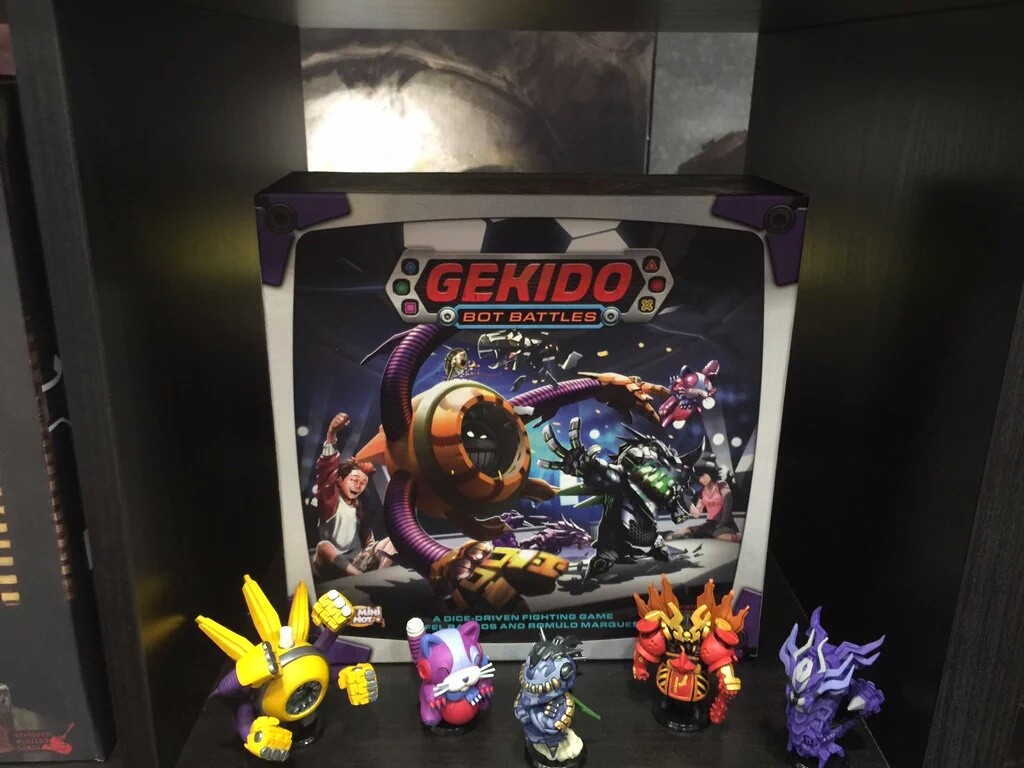 3. Colony (from Bezier Games)
I’m a big fan of both Suburbia and Castles of Mad King Ludwig. So when Ted Alspach, founder and chief designer, of Bezier Games, announced their next city building game, I was stoked! This time, the setting seems to be a dystopian future, and instead of tiles, the game will use dice and cards, with hints of a random set-up ala Dominion. DOES THAT SOUND AWESOME OR WHAT? Will this be Bezier’s take on the growing genre of dice placement games? GAMA is the first time components have been shown to the public! We are soooo envious! 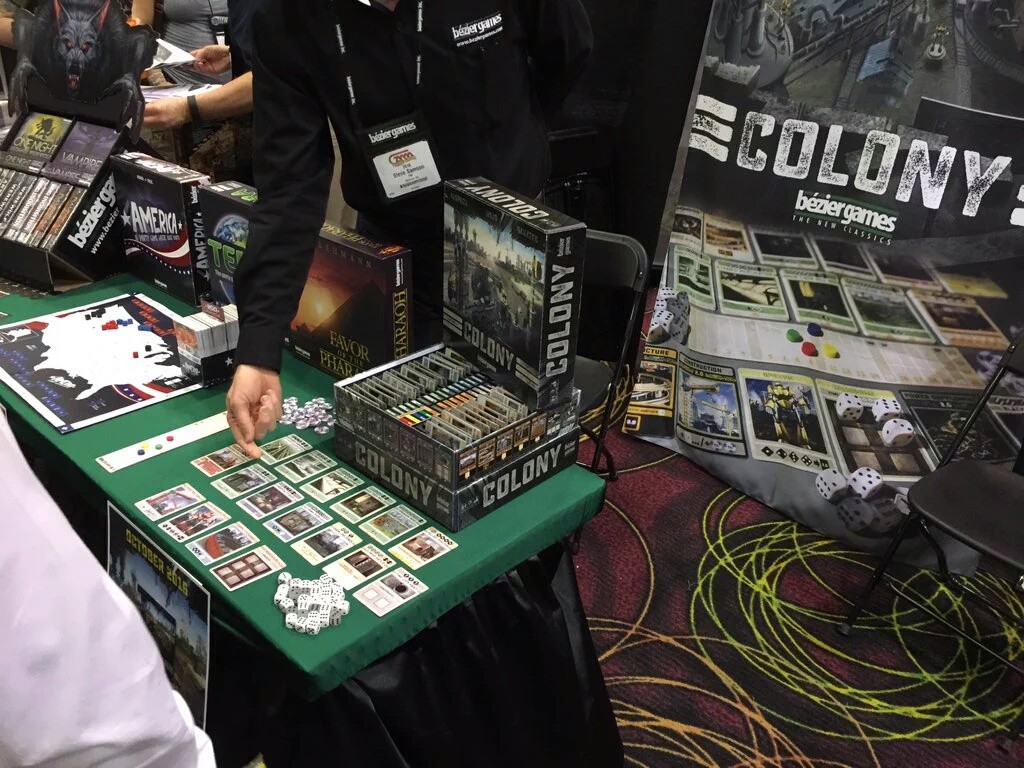 2. Marvel Legendary: Civil War (from UDE)
And now we’ve come to the BIG GUNS! It was inevitable wasn’t it? With a huge blockbuster movie coming out this year, we all knew UDE was certainly going to pay fan service to all that hype. Civil War will be a big box expansion just like Dark City and Secret Wars Vol 1/2. What new mechanics will we see here? Will we see some hero vs hero action? Will be able to form Team Iron Man and Team Captain America lineups? How will Masterminds work if there are no villains? June 2016 cannot come here fast enough!! Big props to Eric Martin for breaking the news at GAMA (@boardgamegeek) 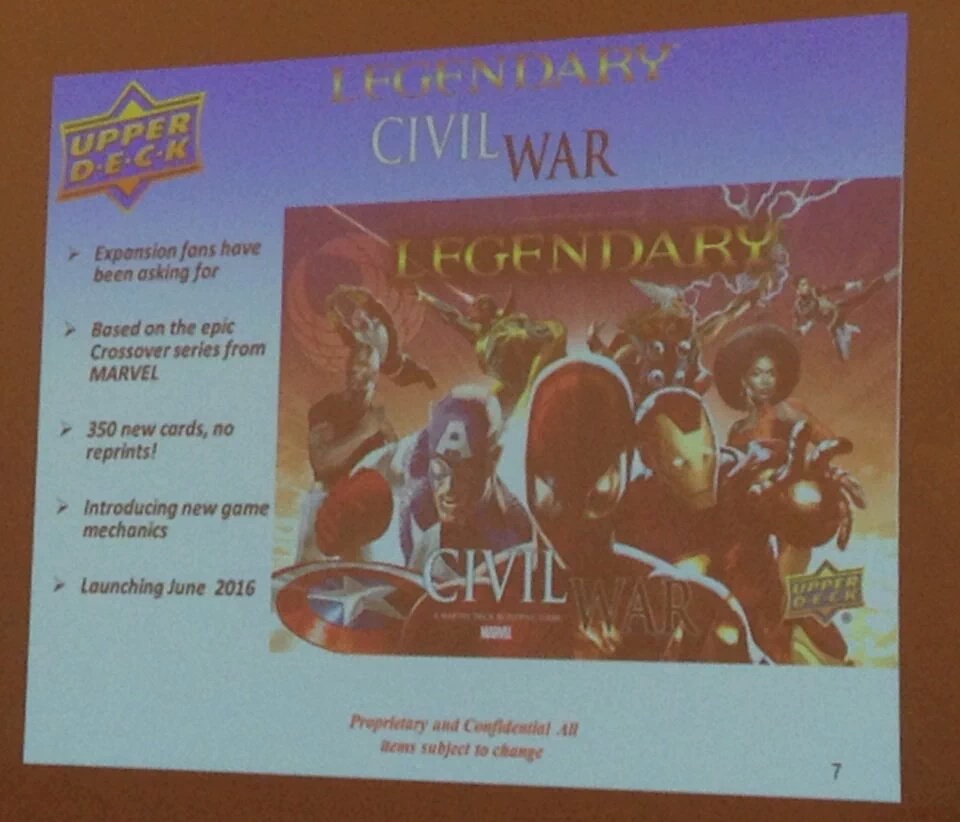 1. Bloodborne AND The Godfather (from CMON, by Eric Lang)
So we cheated a bit. We’ve got two games in the #1 spot. I know, I know. But the Eric Lang + CMON combination has been on an absolute creative tear lately that we just had to give both these games the top spot. Remember Blood Rage and the rush for Kickstarter exclusives after release? How about how The Others: 7 Sins, their take on the Descent “Overlord” genre, generated over USD1.4 MILLION in Kickstarter? You definitely don’t want to miss out on another game from this dynamic duo again. The man himself took to Twitter to talk about these games:

Bloodborne: risk management with a bit of groupthink, inventory management/upgrades and tactical play in an intense 30 minute card game.

My goal with Bloodborne was to channel the intensity and frustration of the video game into a contest between players. Lots of death.

Godfather is a standalone big box board game from @CMONGames, with great minis (obviously); 3-5 players, about 75-90 minutes.

Godfather: The Board Game.
Thugs on a map.
Streamlined, confrontational “worker placement with murder and intrigue”
Greatest movie ever.

You heard the man!

We hope your wallets are ready for all these games, folks. Ramen cup noodles, here we come!

How about you guys? Which games in the GAMA trade show are you looking forward to the most? Did we criminally miss out on some games? We’d like to know! Hit us up or let us know in the comments below!