Cult of the New Reviews: Above and Below 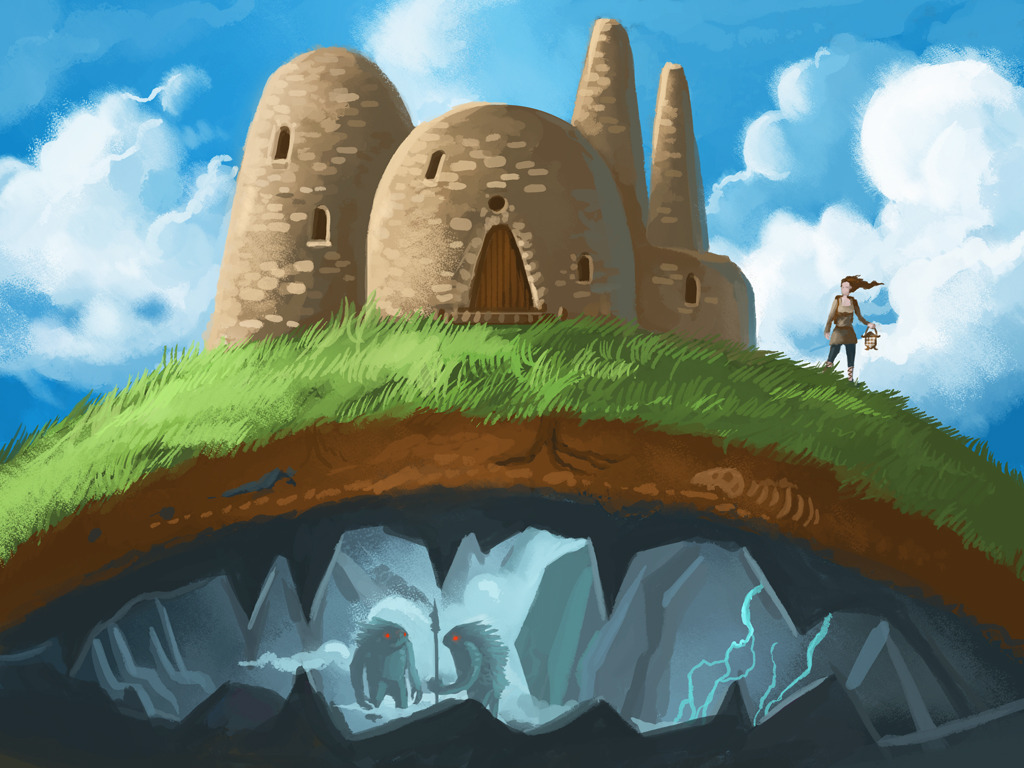 Welcome to a brand-new segment here at UnGeek called Cult of the New! A segment where we discuss the latest ‘hotness’ within the boardgaming community. This article is aimed at both old and new gamers alike to help them decide if this game is indeed worth picking up. We will also try (if possible) to compare it to some of the more-older games that feature the same mechanic.

To start things off we will go over (and under) this newly Kickstarted game Above and Below!

Above and Below is a 2-4 player game designed by Ryan Laukat (Artifacts, Inc., City of Iron, Eight-Minute Empire) and published by Red Raven Games. In this game you are a villager who just barely escaped from a raiding barbarian tribe that attacked your hometown. You and few other survivors have traveled far and wide and in doing so you found a patch of fertile land to start a new life in the process. Little did you know that beneath your location lies a vast network of caverns filled with potential riches. Because of your curiosity (and dire need of resources , you try to make use of what you have as you explore what lies both Above, and Below!

At its heart, this is an action-selection game that has a nice hybrid of mechanics such as Tableau-building, resource management, dice-rolling and storytelling. Contrary to what others are saying this actually does not have a worker-placement mechanic, since you are not contesting/blocking other players for spots on the board. Your villagers serve as your “action points” instead that determine how many actions you can do during a round. Succeeding here is determined by a number of factors but basically the player who built the most impressive village, gathered and utilized the most resources, having a great reputation and experienced the best stories will win him the game.

WAIT… Storytelling you say? We will get to that later! For now let’s look at the actions a player can choose in a turn.

Actions in the game:

Like I said, the game mainly revolves around an action selection mechanic. Each turn in clockwise order (Starting with the 1st player), you can choose 1 of 5 actions. Let go over them in detail:

The 4 types of buildings are:

Regular Buildings: These are the basic buildings that you can build “above ground” and grants you  different abilities such as gaining extra income, providing resources or generally giving you “extra beds” to refresh your villagers at the start of each round. Alternatively, as a free action (before starting you main action) a player can spend 1 coin to refresh the building cards and deal new ones.

Key Buildings: There are always 4 random “Key Buildings” dealt in the board at the start of every game for variety. These are generally cheap to get and can help give you focus or dictate what additional abilities you can do during your turn (usually related to exploring) such as re-rolling dice in encounters.

Star Buildings: These are the expensive buildings that will usually grant you the most points at the end of the game. When getting this you should consider strategies that focus on maximizing the abilities of these structures.

Underground Buildings (Outposts): These are just like the regular buildings that could give you various resources and abilities, but you can only build this below and empty cavern space, which you can normally acquire after a successful exploration (more on this as we tackle the storytelling part, I know you’re excited about this!).

With these resources you can do a number of free actions before taking your main action and these are:

*Not necessarily an action, but at any time during the game (even if it’s not your turn) you can choose to place your goods on the “Advancement Track” on the bottom-row of your player board, starting from left to right. Once placed you can no longer remove them but you can still add resources of a similar good already there, placing them in a stack. Plan carefully when doing this as this can provide you with coins and end-game points when done efficiently.

The player adventuring will be read a story and usually be presented with a minimum of 2 options, which could range from doing good things such as (but not limited to) rescuing/helping/giving/negotiating or not so good things like ignoring/attacking/taking/stealing and the like. 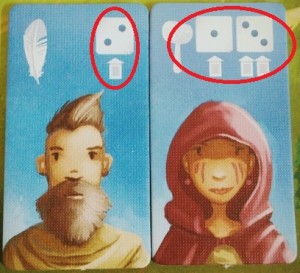 The player chooses what he does and rolls a dice for each villager participating, checking the number of lanterns (successes) rolled on the top part of the villager tile.

The player can either “succeed”, or a “nothing happens” or a “fail” depending on the number of lanterns (Explore X value) rolled. Alternatively, a player can “exert” or “injure” a villager to add 1 success to the result, placing them in the injured (+) area of the player board, lengthening the “recovery time” a villager will refresh during a round.

This offers a nice risk-reward system that could affect your overall reputation at the end of the game. What’s even greater about this is that some resources, items and even powerful characters can only be obtained when adventuring or having an encounter. In some cases, it could even net you with a lot of coin!

At the end of 7 rounds, the player with the most number of points — usually by building, gathering resources, adventuring (also having a good standing on the reputation track) — wins! So here are my final thoughts about the game: 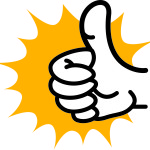 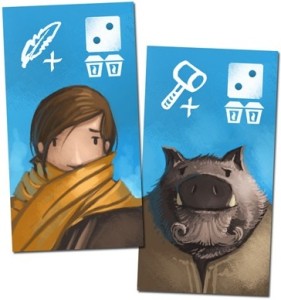 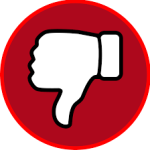 If you want a numerical rating I personally will give this a 4/5 fingers! With 4 fingers pointing above and my thumb pointing below (if that’s even possible :p).

And there you have it! Thanks for reading all the way to the end! I’m sure there are some stuff that I missed out, so feel free to leave a comment or a feedback. I hope you give this gave a try at least, it really is a fresh new take on various gaming mechanics which might be surprise you!

Interested in grabbing a copy?  Gaming Library sells it here in the Philippines for P2,600. See you in the next installment of Cult of the New and keep on gaming!