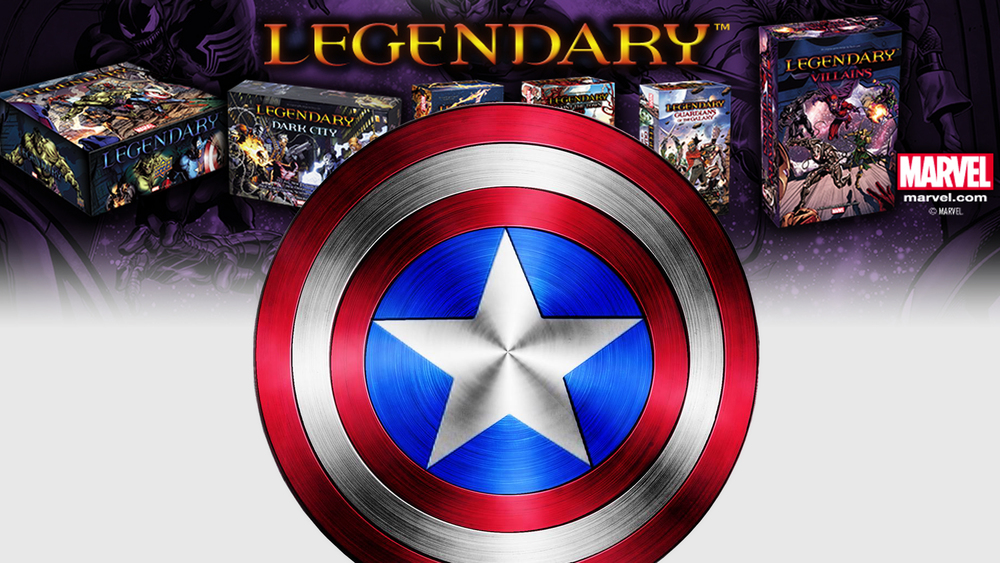 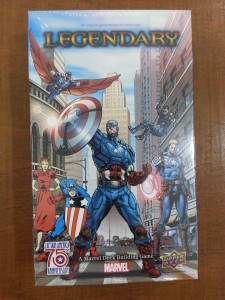 At ease, soldier! Just in time to hype up for next week’s Civil War movie, Upper Deck Entertainment just released Captain America 75th Anniversary, the latest expansion for their Marvel Legendary: Deck Building game. We got our hands on a copy and we’re more than happy to unbox this bad-boy for all you Marvel fans out there! Excited? Well, I can already smell the Vibranium from here! 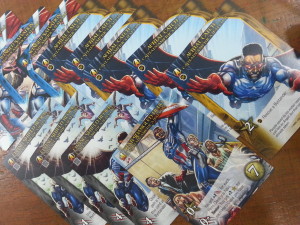 Upon opening the box and its contents, I would like to mention that, this time, Upper Deck did a good job in finally organizing the components! Upon fanning the cards on the table, I noticed that all of the heroes, villains, plot twists, and masterminds were already grouped together… A big leap from previous sets – where sorting it out was a game in itself (I’m looking at you Legendary: Encounters!). Very good, UDE! You finally listened to the fans.

Now, let’s take a look at EVERYTHING that we’re getting inside the box. The game comes with 100 cards. Let’s start with the heroes first! 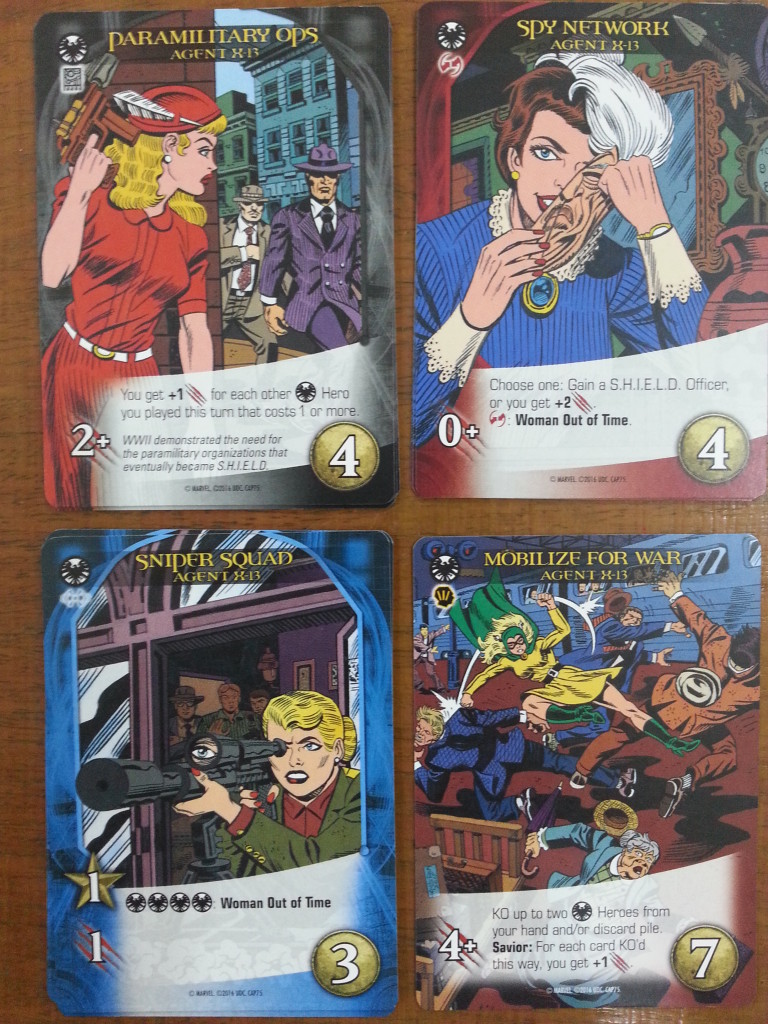 Agent X-13 introduces a new keyword that best describes the hero’s resiliency in the set called Man (Or Woman) Out of Time. She and the Captain America cards both have this keyword that means “After you use this card’s abilities, set it aside. At the beginning of your next turn, play this card a second time and then discard it.” This is a neat skill to have since it has the potential of triggering Superpower abilities on both of your turns, nice! Her Ultimate card, “Mobilize for War”, on the other hand has the “Savior” mechanic which means you can use its ability if you have at least 3 bystanders in your victory pile. In her case, you can get a +1 in attack upon KO-ing a card when you use “Mobilize for War’s” first ability. 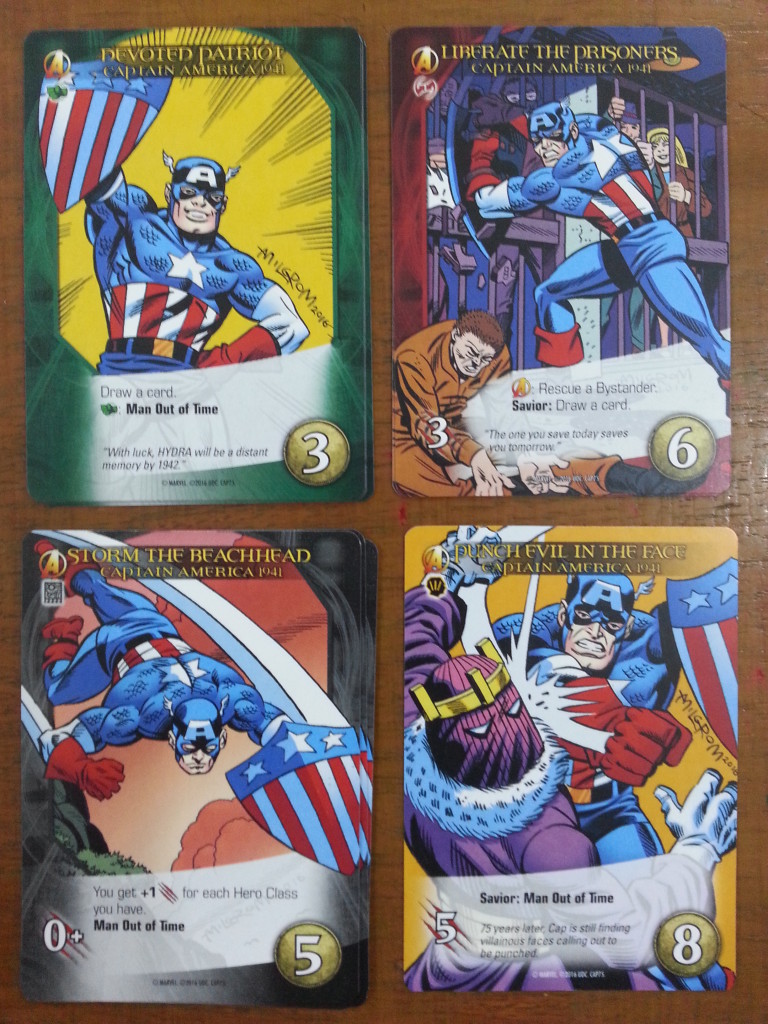 Captain America (1941) has the same “Man Out of Time” and “Savior” keyword which focuses on making a draw engine and rescuing bystanders. The “Punch Evil in the Face” card lets you repeat that 5 power attack next turn as long as you have enough bystanders in your victory pile. 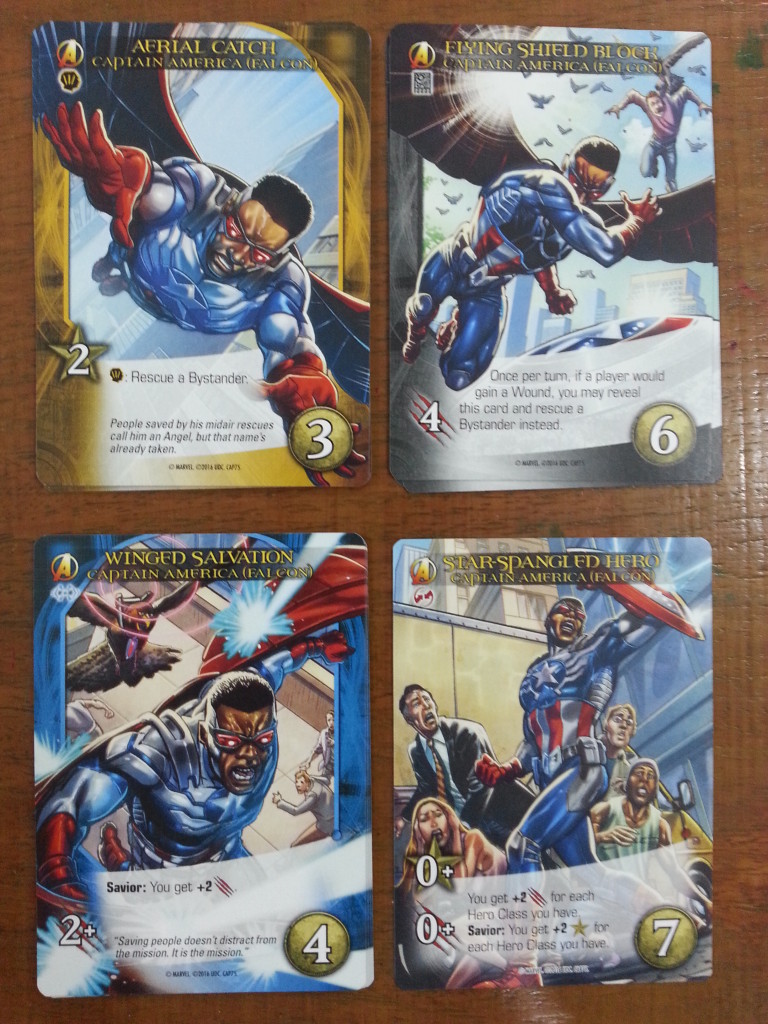 Captain America (Falcon) also has the “Savior” ability that boosts his attack power. I particularly like his “Flying Shield Block” card as it protects a teammate from getting a wound (and rescuing a bystander as an added bonus), but that 6-cost can be a problem in the early rounds. With the right mix of Hero Class cards, the “Star-Spangled Hero” is not half-bad as well. 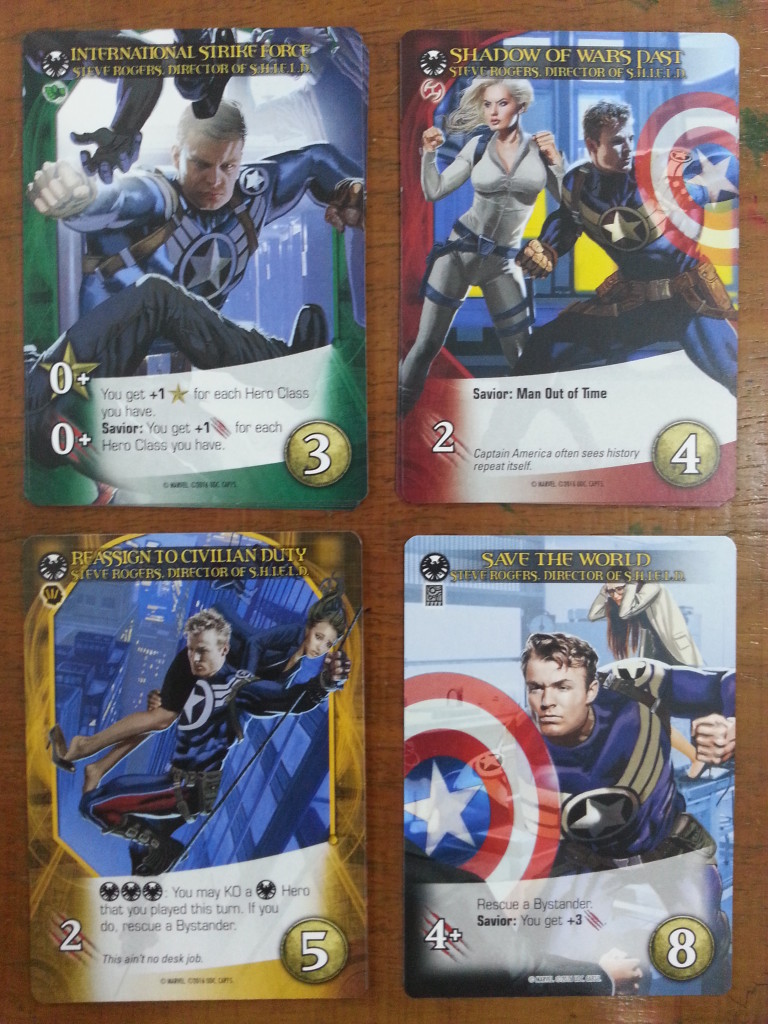 Steve Rogers, Director of Shield mainly focuses on beating up his adversaries as all of his cards have the attack symbol. They also have this nice synergy of rescuing bystanders, then using the savior ability to boost up his attack. 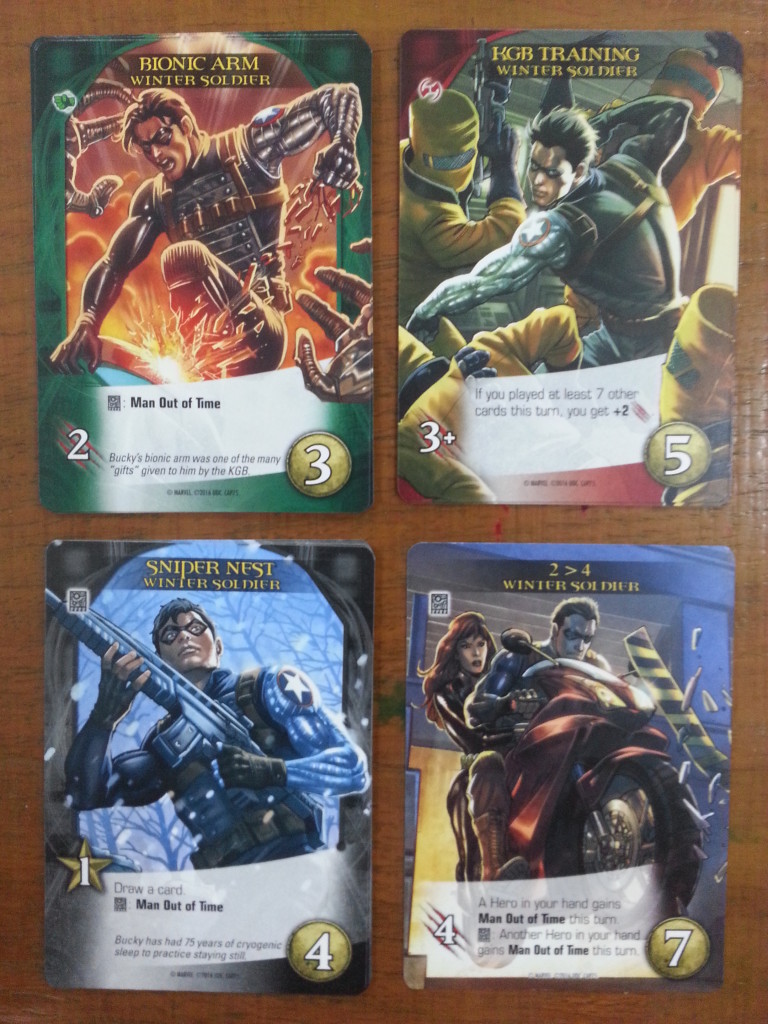 Winter Soldier is the tech-oriented hero in the mix. Utilizing drawing cards or triggering his “Man Out of Time” ability is his business, which either repeats his attack or drawing another card on the next turn, hopefully setting up for “KGB training” when the player plays at least 7 cards. His “2 > 4” ultimate card could lead to potential combos as well. 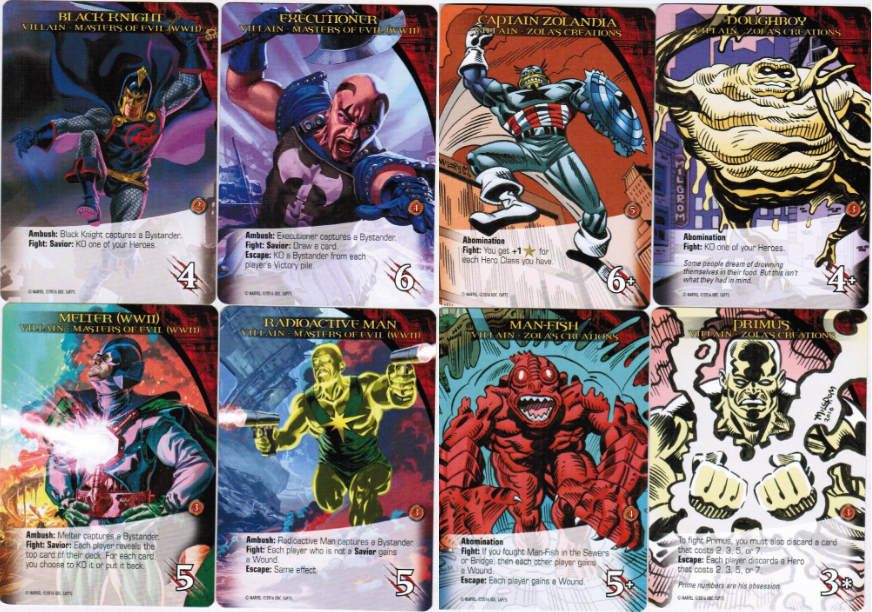 Let’s now take a look at the 2 Villain groups in this set. The Masters of Evil (WWII) mainly focuses on capturing bystanders for their “Ambush” effect.

Zola’s Creations have a new keyword ability called “Abomination” which simply means that aside from their printed attack value, they also get a + equal to the card’s attack value that’s right under them in HQ. Pretty nasty.

There are 2 Masterminds in this set. Baron Heinrich Zemo is considered to be the easier of the two with a 9+ to attack. 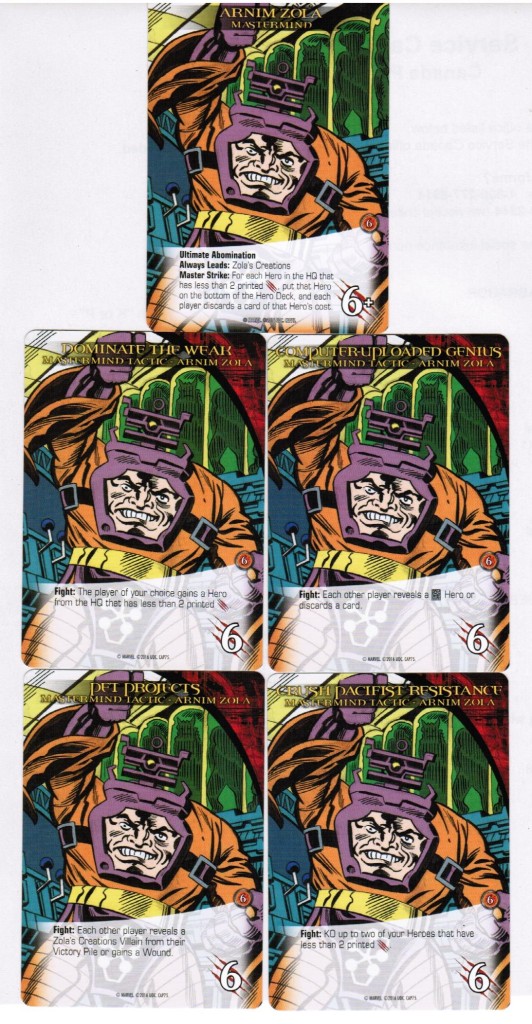 The real mean baddie here is Arim Zola and man is he tough! Besides the fact that he leads Zola’s Creations (most of which have abomination). Arim Zola himself has the “Ultimate Abomination” which simply totals ALL the attack value in the HQ and adds to his 6+ to hit. That’s really bad. 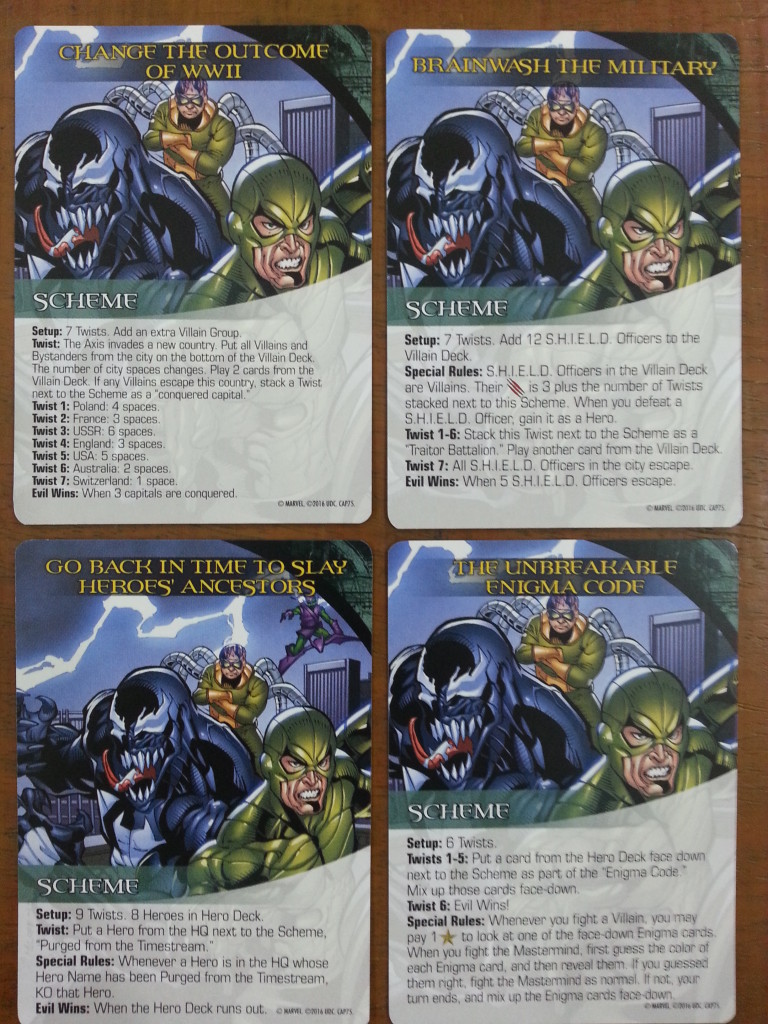 Lastly there are 4 new Schemes in this expansion. I personally like the “Change the Outcome of WWII” “Brainwash the Military” and “Go Back in Time to Slay the Heroes Ancestors ”card because it really fits well with the theme.

*If you remember that, you’re old.

And there you have it! I really love this new small expansion and it just might be my favorite along with Guardians of the Galaxy. I like the 2 new mechanics Man Out if Time and Savior and that it really goes well with the theme! Now, with the upcoming movie, I have to ask which side are you on? If you’re with Team Cap then you’ll definitely want to check this out! For the deck-builders and Marvel fanatics (who are in the Philippines), you might want to go pre-order the game now by clicking HERE. As a bonus, we were informed by Gaming Library that there are LIMITED COPIES AVAILABLE FOR PURCHASE RIGHT NOW for the first few people to pre-order! So go on and pre-order today!