Punch It! The new Star Trek Beyond Trailer and Poster are here! 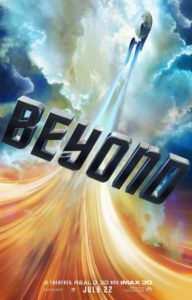 After dropping just one trailer online a couple of months ago and delivering updates and promotional materials in small portions, Paramount Pictures finally lets the cat out of the bag and delivers a brand new theatrical trailer and poster for “Star Trek Beyond” – which once again features Chris Pine, Zachary Quinto, Karl Urban, Zoe Saldana, Simon Pegg, John Cho, and Anton Yelchin reprising their roles as the stalwart crew of the U.S.S. Enterprise as they face a new adversary and literally go “Beyond” the call of duty.

Directed by Justin Lin of the Fast & Furious film series, Star Trek Beyond sees the crew of the U.S.S. Enterprise well into their 5 year mission of exploration… Until an unstoppable threat destroys the Enterprise and forces its crew to abandon ship. With an unknown enemy hell bent on destroying anything the Federation stands for, Captain James T. Kirk and the rest of his crew must find a way to stop their new foes and save the galaxy from another evil once again.
- Advertisement -