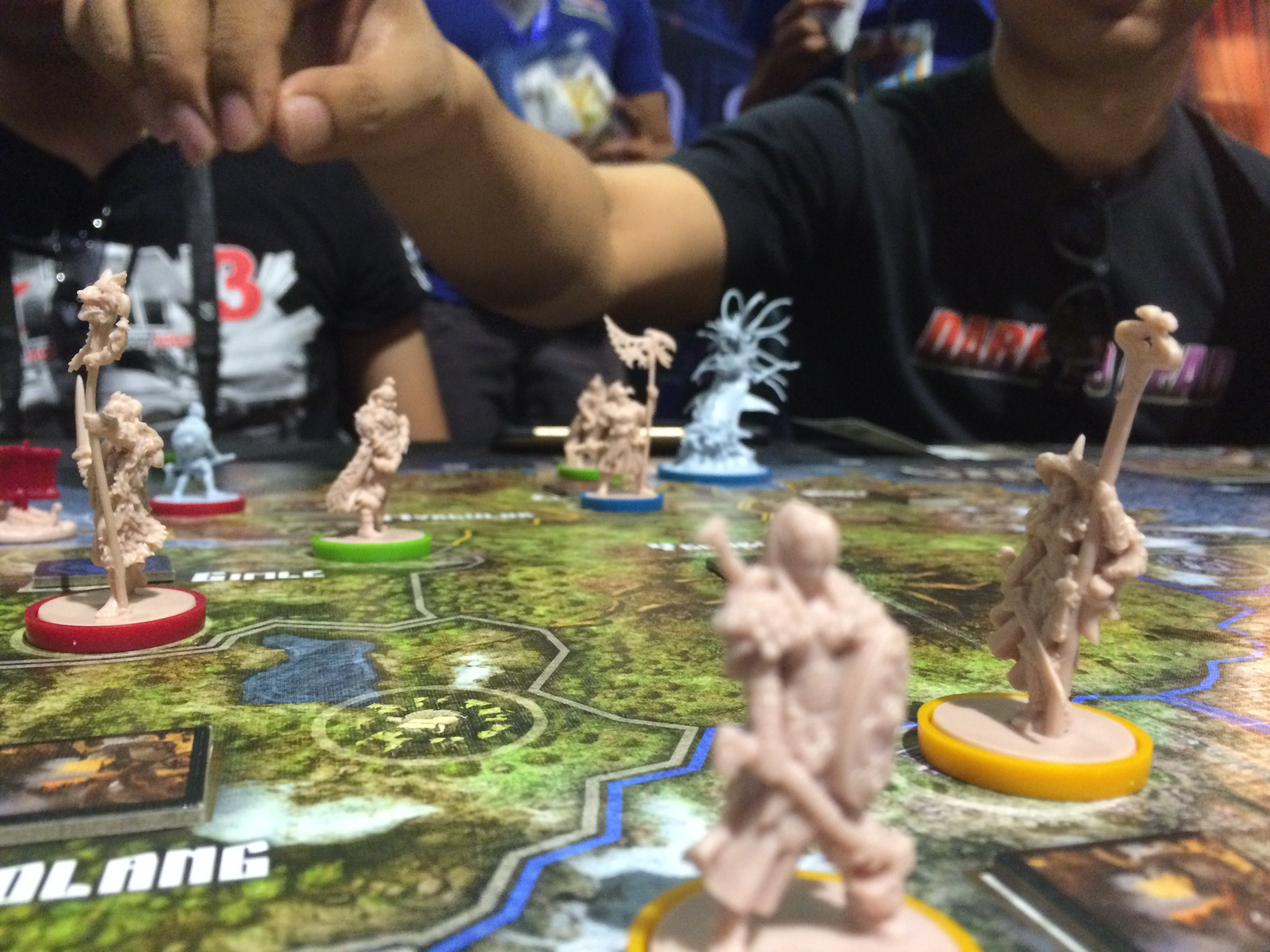 ToyCon 2016 was a BLAST with all its fun activities! But it got its extra serving of RAGE, BLOOD and GLORY as the Gaming Library’s Blood Rage Tournament Finals took place. 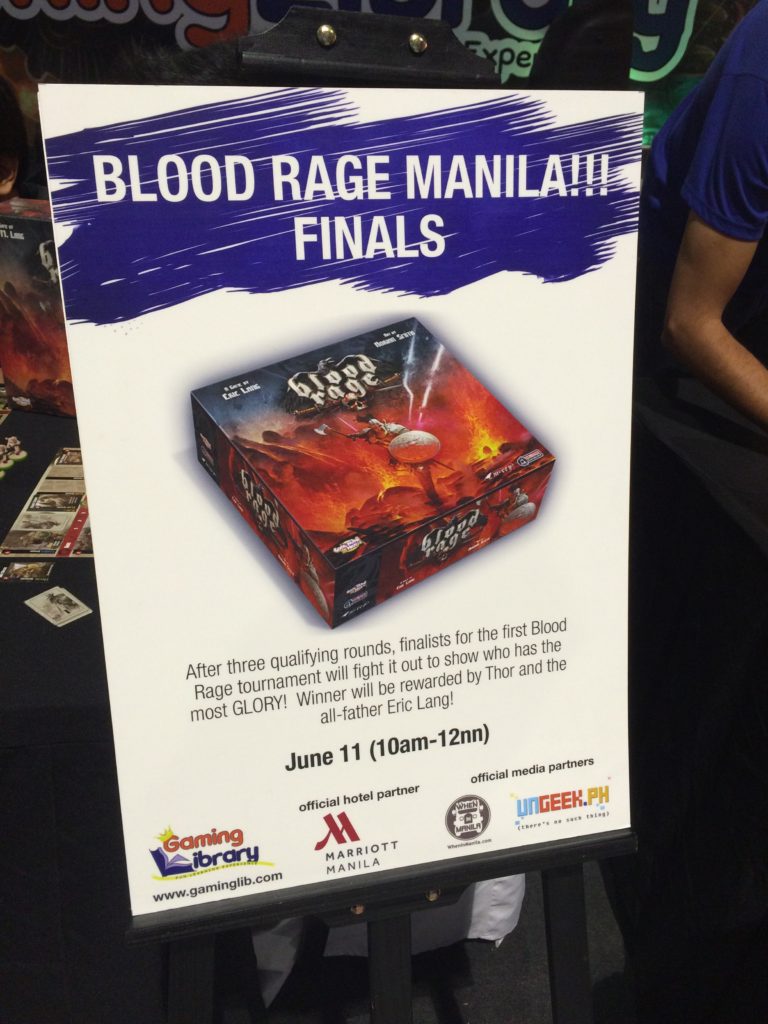 Held in the Gaming Library Booth at the SMX, Pasay City, Midgard, 5 battle-hungry, veteran souls took to the fields and waged epic battles, made uneasy alliances and displayed their cunning, all for the honor and glory of being named Champion! The game designer, Eric Lang, graced us with his presence and acted as Odin, overseeing the gameplay. At the start of the finals match, the finalists were introduced as day shouted the battle cry of their clans: Vince Golangco of the Bear Clan! (Grooooooar!), Miko Hernandez of the Serpent Clan! (Ssssssssss!), Mark Eugene Chua of the Raven Clan! (Kaw-kaw!), Federico Hipol of the Wolf Clan! (Awoooooo!), and Max Concepcion of the Ram Clan! (Ummm… Baaaaa?)

As a a nutshell, Blood Rage is a Norse Mythology/Viking-themed War Game published by Cool Mini or Not where players aim to get the highest Glory (points) in the game. They earn glory mainly by fighting battles and fulfilling quests throughout the game. A game is divided into 3 Ages, wherein players get to draft cards, perform their actions and at the end of every age, face Ragnarok. It’s actually one of our favorite games here in Ungeek, which we highly recommend! (For Glory!!!) 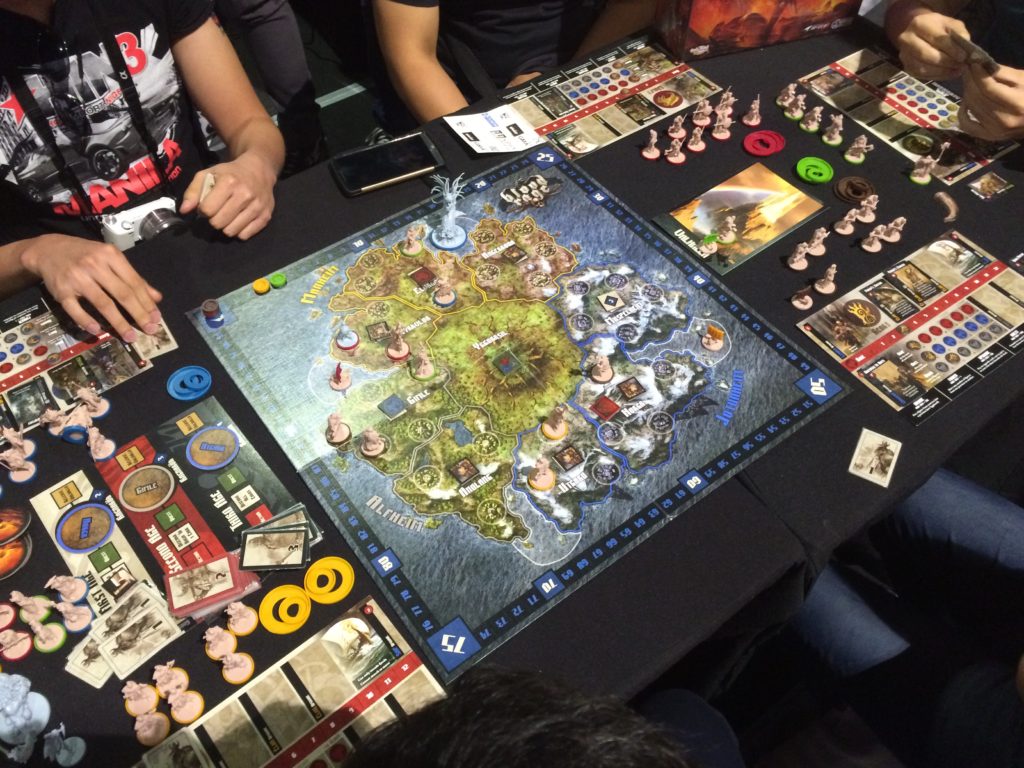 Back to the tournament, the game began with the players drafting cards and setting-up card-combos and maximize the glory they can get. As the players marched to war, it was evident that each wanted to establish good positioning and dominance but with a small board, skirmishes broke out as the different clans clashed! If this was not enough the clans called out gargantuan monsters, ally races and, unique to the Finals, the enigmatic Mystics made their appearance to give an advantage to their clans. 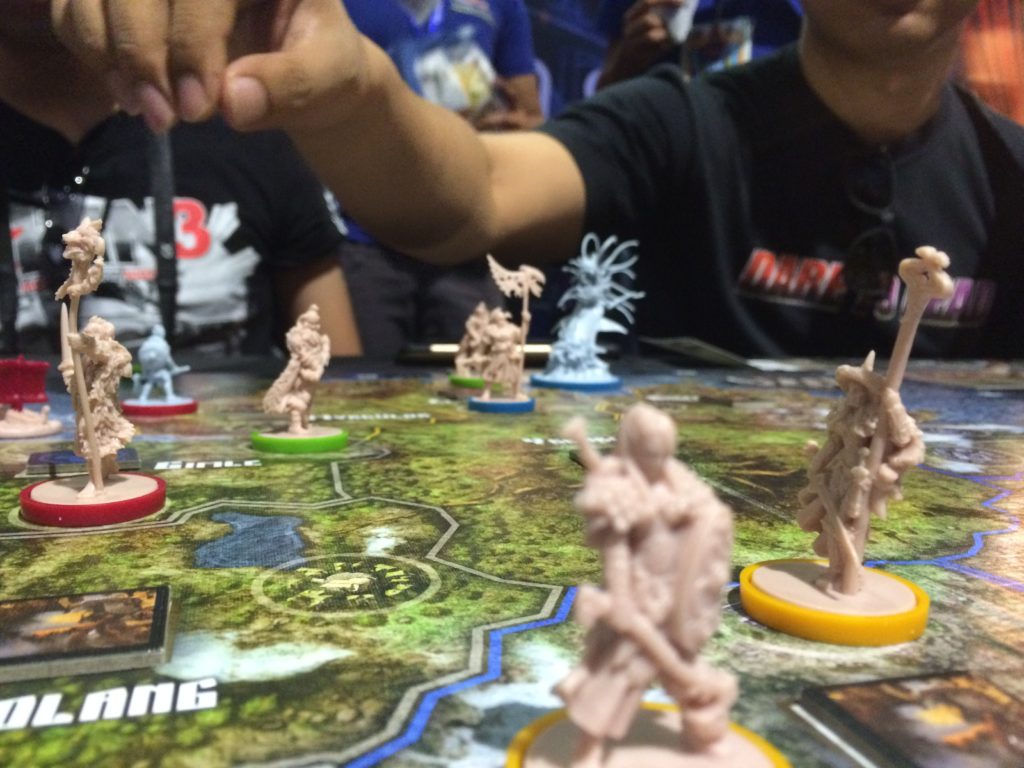 The battle was fierce, brutal and very close but after the dust settled, a victor emerged to bask in the glory as he was named champion of the Blood Rage Tournament… Vince Golangco of the Bear Clan let out a load roar of victory! 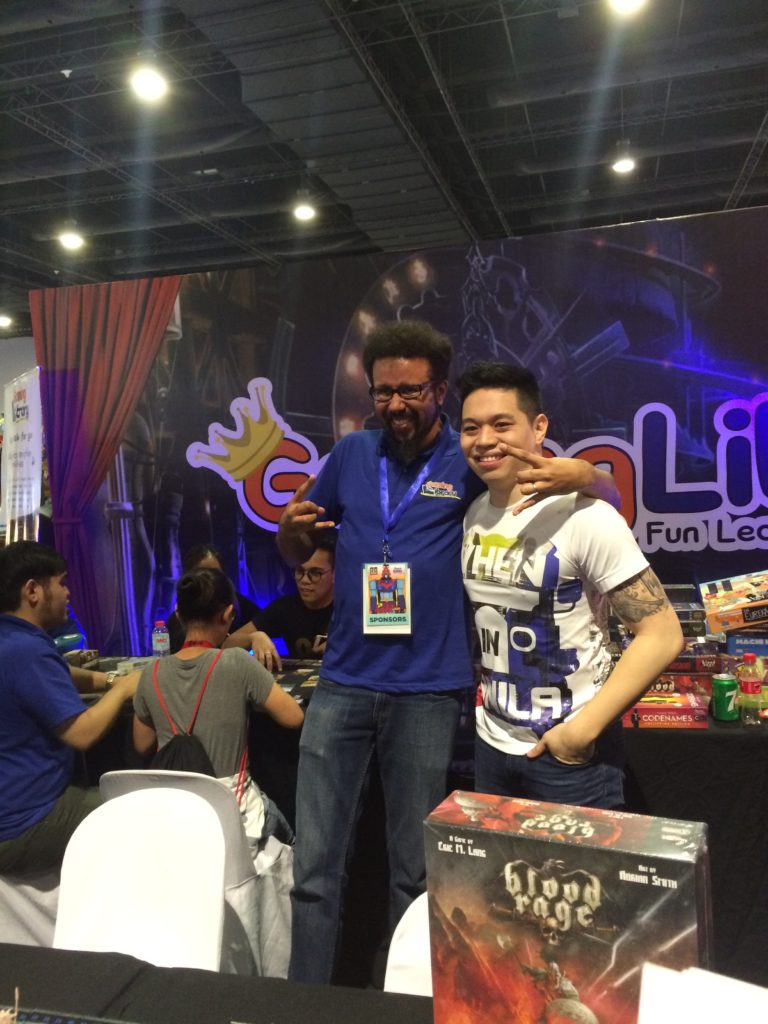 Coming in at second place was Mark Eugene Chua of the Raven Clan, who was just 7 points away from winning! Miko Hernandez of the Serpent Clan slithered into 3rd place while Federico Hipol of the Wolf Clan claimed 4th place and Max Concepcion of the Ram Clan honorably took the 5th spot. 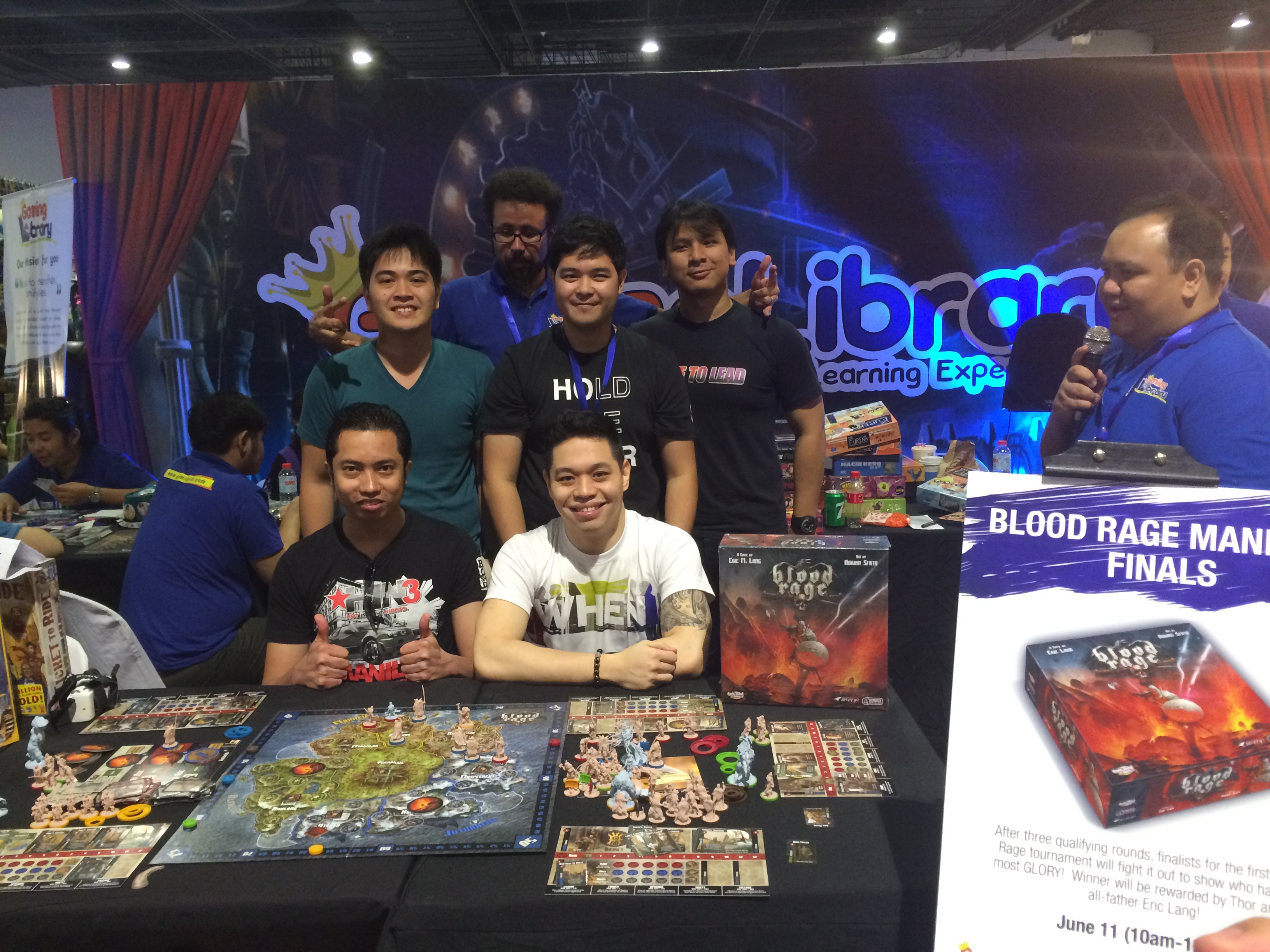 Eric Lang, congratulated the winner and acknowledged the valiant efforts of all the players. It was a truly memorable bout and hopefully, we would be seeing more tourneys like this, whether in the battlefields of Blood Rage or a different one. For that, we await the sound of the warhorns of Gaming Library!