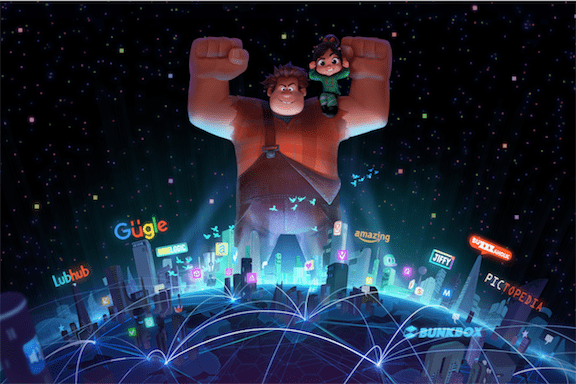 “I am bad and that is good, I will never be good and that’s not bad, there’s no one I’d rather be than me.”

“Ralph leaves the arcade and wrecks the internet,” according to John C. Reilly (Boogie Nights, Guardians of the Galaxy), who is returning to voice Ralph in the sequel  as seen above in the first concept art released for the movie, where parodies to Google and Amazon, among others, are shown.

Sarah Silverman (School of Rock, Super High Me) is also making a comeback as Vanellope von Schweetz. Additionally, the movie might not be called Wreck It Ralph 2, as Disney says the it currently has no title yet. 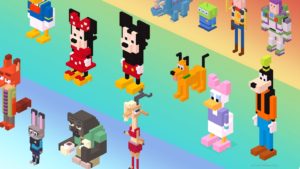 To fuel the hype a bit, for those who play the Disney Crossy Road Game, according to Gamespot:

“Disney announced that the Disney Crossy Road game is being “wrecked” by Ralph in a special update to celebrate today’s announcement. As part of this, starting at 12 PM PT / 3 PM ET, Ralph may show up in your game and “wreck” some of the gameplay.”

Lastly, Disney said that the Wreck-It Ralph sequel is taking the place of the animated movie Gigantic, which has then been moved to a November 21, 2018 screen date. 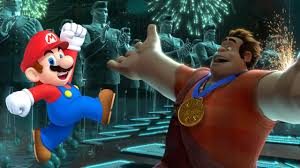 Who would you like to see in the sequel? Will we finally see Mario on the big screen again? Or an Overwatch cross-over perhaps? (Ok, the last one is more of wishful thinking…) Let us know in the comments!