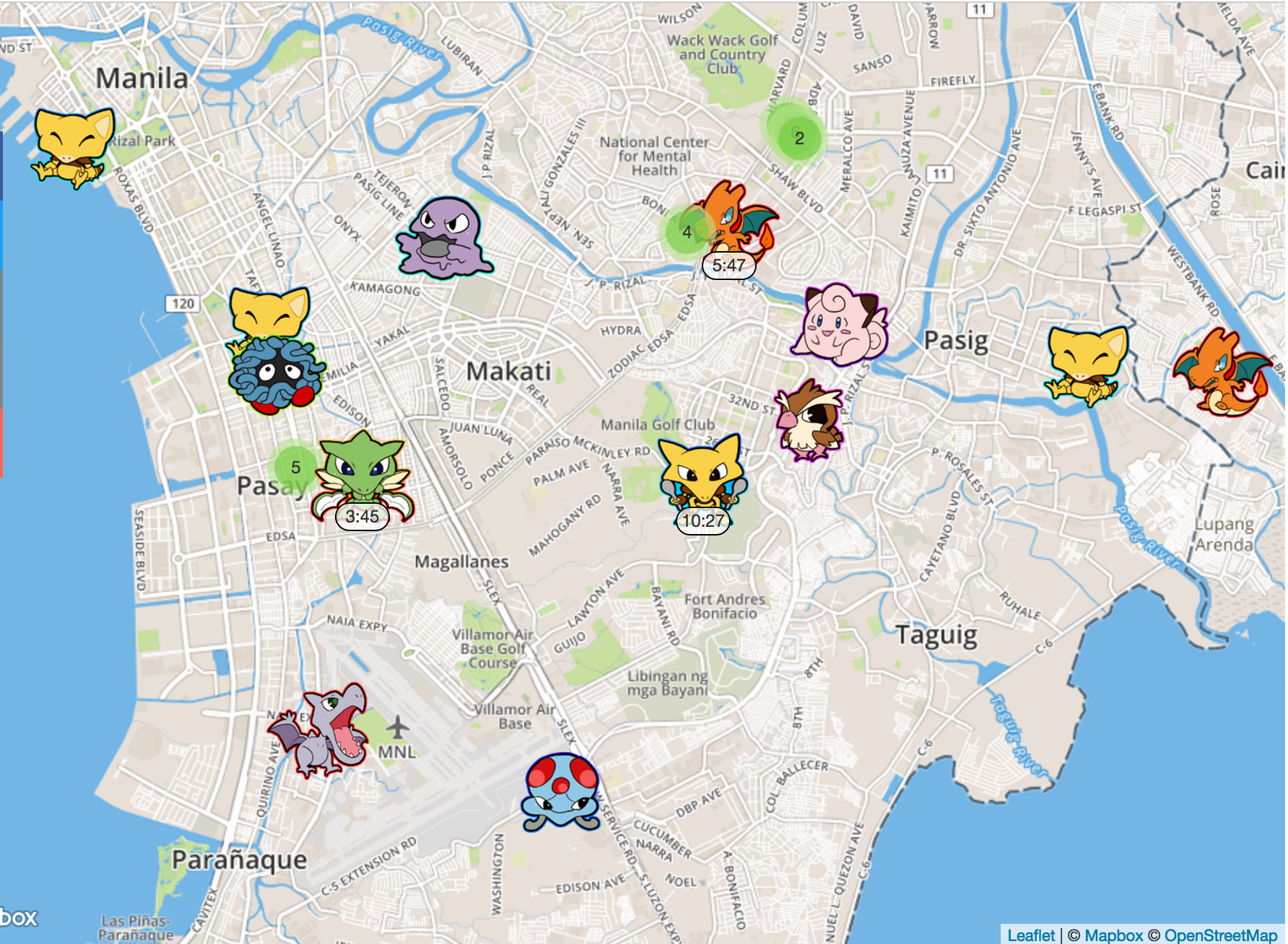 Like Batman, you would need your own ‘utility belt’ if you to be the wanna be the very best, like no one ever was! Here are some tools that might be of help to your quest in becoming a Pokémon GO Master.

What is a Pokédex?

The Pokédex  is a  mini-encyclopedia of Pokémon species, types, evolutions, and moves.

On the app, you can find it by clicking on the Menu » Pokédex icons. The menu is the white and red Pokéball displayed at the middle of the screen.

If you are trying to figure out which Pokémon is 25 or 60 or 142, you may want to browse IGN’s List of  Pokémon GO – Pokédex. The site not only gives you a list with their icons, but also shares the number of candies needed for the Pokémon to evolve. 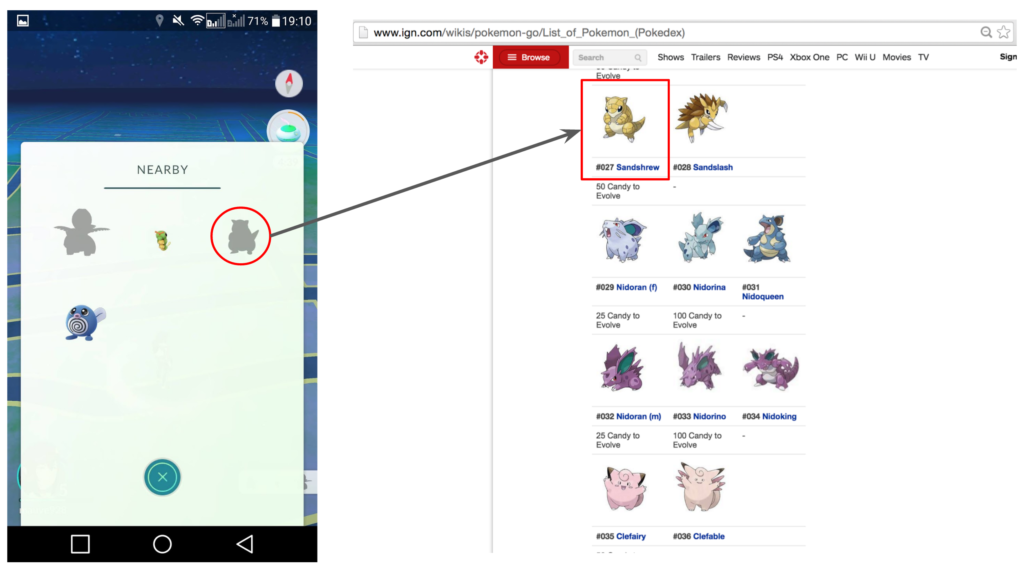 IGN’s List of  Pokémon GO – Pokédex is a good tool to memorize what each Pokémon would look like, which will be very helpful in identifying those gray Pokémons in the Nearby screen.

So #142 is Aerodactyl. Click on the Pokémon image to view more details about that Pokémon such as type, combat moves, and special moves.

Each individual Pokémon is assigned Combat Power (CP) upon capture, which is their attack level during battles. On the other hand, Hit Points (HP) is their health indicator which can be depleted during battles. 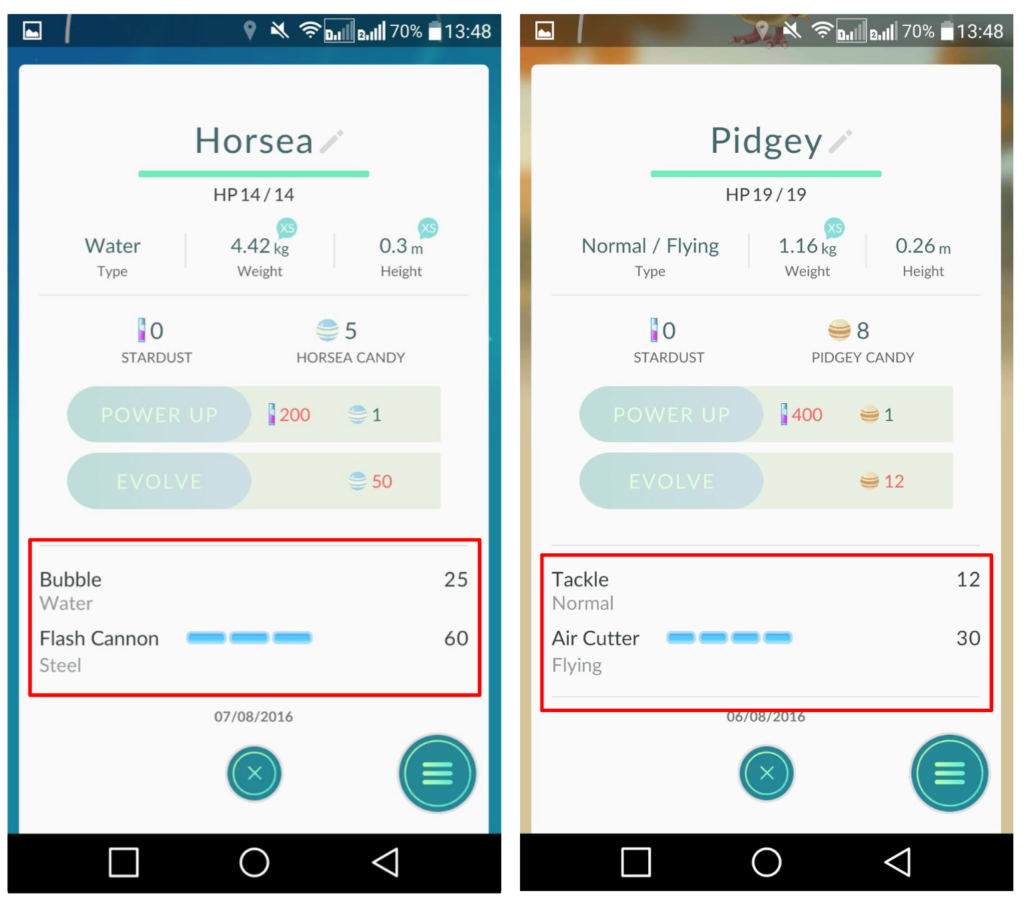 Scrolling down the screen of your Pokémon’s attack moves, the topmost is the Normal attack move, while the bottom is the special attack move. The number near the attack move is the base damage it can cause to your opponent, while the blue horizontal bars indicates the speed of the attack.

It doesn’t automatically mean that your high-CP evolved Pokémon is better than your other normal Pokémon. They can vary based on the Pokémon’s IV.

Weirdly enough, the Pokémon’s IV or individual values (which is the combination of Stamina, Attack and Defense) is not shown.

Each Pokémon is ‘born’ with IVs which varies from 0 to 15 based on your current Pokémon level when you caught or hatched them.

Learning about your Pokémon IV’s would be very helpful in fighting in gyms, and determining which Pokemon to upgrade. Each Pokémon’s Stamina and Defense are very important when defending in gym battles.

The Attack and the Move you are attacking with has base damage and attack speed are important for attacking gyms.

The SliphRoad Research displays the general Pokémon info including Height, Weight, the levels of Attack, Defense and Stamina.

There is a whole math equation in which HP and CPs are computed, which Poké Assistant IV Calculator has provided. 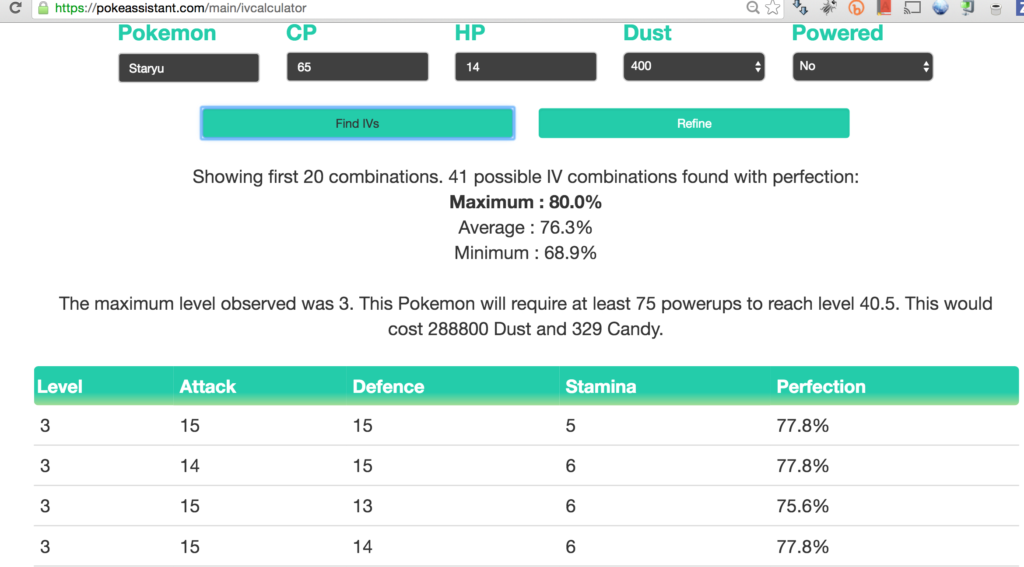 You may opt to view the Poké Assistant IV Calculator instead to easily check your current Pokémon’s level and its possible combination. Enter the Name, CP, HP, and Dust needed to power up your Pokémon. “Powered Yes/No” means if you’ve powered up your Pokemon already or not. The level range is up to 10 and the higher the level the stronger or more optimal your Pokémon is. 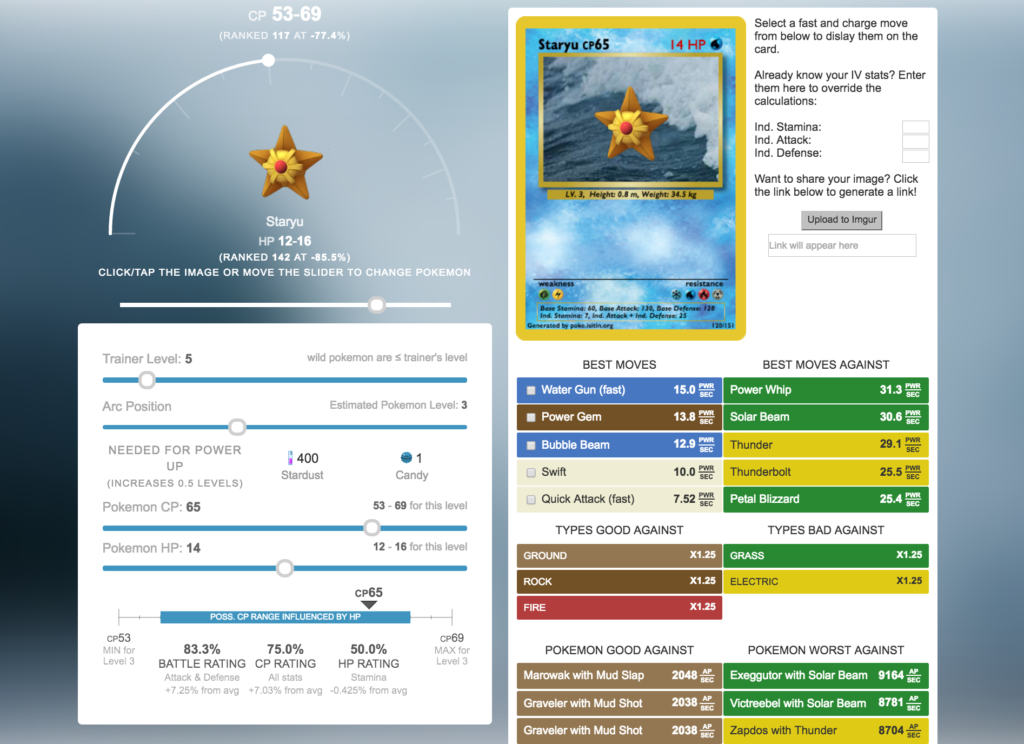 Or perhaps you may opt to use Pokémon Rater‘s  more visually appealing tool instead. This tool also shows which attack moves are better against certain Pokémon types. The color codes (Green for Grass, Light Brown for Ground, Red for Fire, Yellow for electric, and Dark brown for Rock) make it easy to identify the types. Use the horizontal slide to select the Pokémon, and the arc slider (arc position) to change the Combat Power (CP). 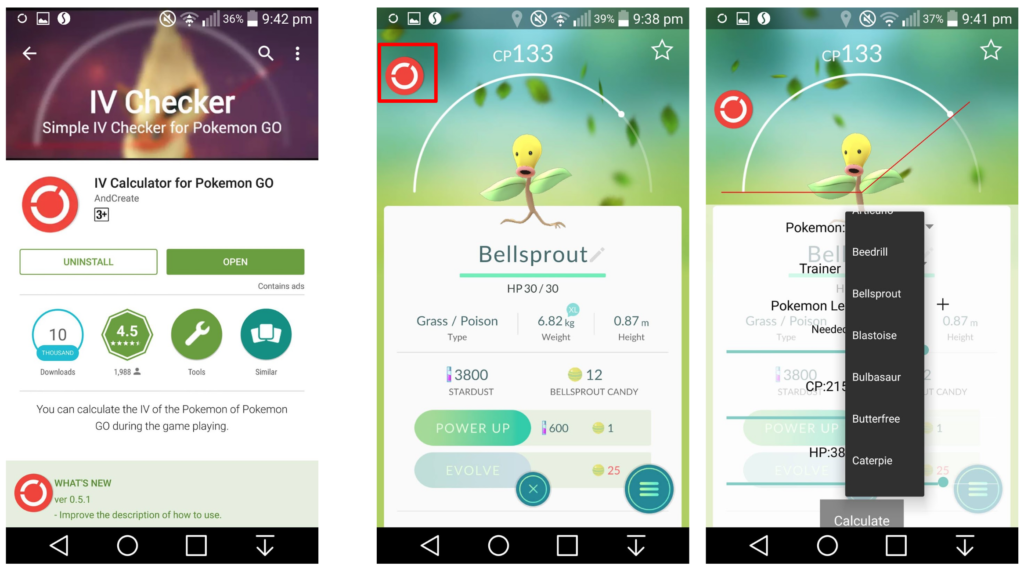 Another nifty tool you can use even while playing the game is IV Calculator for Pokémon GO. This tools overlays the IV Calculator over your screen which you can check whether a particular Pokémon is at it’s most optimal or maximum state. To use the app, click on that red button icon to launch the app, then select the Pokémon name, adjust the CP and HP of based on your Pokémon stat, and press calculate. Download the app from Google Play.

There is also an iOS app for Offline IV Calc for Pokemon GO which you can download from the Apple App Store.

PogoToolkit.com is excellent and simple to use. It checks how many candies you need for the next evolution. The sites gives the max combat power (CP) your Pokemon can achieve in Powering up, while the multiplier is the number by how much the current evolution will increase by.

The infographic above shows the different Pokémon you can get when hatching an egg. The greater the distance, the rarer Pokémon you might get.  Just take note eggs require an incubator in order to hatch, and you need to walk the required KM for the eggs to hatch. Some players have tried to “cheat” by attaching their phones to a drone, rumba machine, and even ceiling fan which one Oklahoma trainer got hurt in attempting to do so. Far as we know, speed must not be more than 20 km/h for the walk or run to be recorded.

Tip: When you are about to complete your required KM in hatching, trying to use a Lucky Egg (if you have one), this would double the XP you’ll get from  hatching the egg.

Communicate with other Pokémon Players

You may opt to join Funbuddies (a Philippine-made app) to hangout with people with the same interest. You may also create your own activity to schedule a Pokémon hunt or defending the gym. Currently, Funbuddies is available for free download via GooglePlay.

Another tool is RazerGo is a location-based chat platform that allows you to discover, team up, and communicate with fellow Pokémon GO trainers in your area. This tool makes coordination easy in attacking or defending gyms. Download RazerGo in Apple App Store or from GooglePlay.

Find out what Pokémon is in an area

PokeRadar allows trainers to find the location of crowd-sourced Pokémon, and you can even filter search results to only display a certain Pokémon. PokeRadar claims a 95% accuracy for the information it shares. The tool can be accessible via the browser or the Apple App Store for USD 0.99 or download the APK here (not yet officially sourced via Goole Play).

and of course public service reminder, brought to you by LTFB

LTFRB Advisory: All PUV drivers are reminded that playing #PokemonGo while driving is prohibited. Please report violators to nearest LTFRB office in your area.

Go out, have fun, and go catch em all!