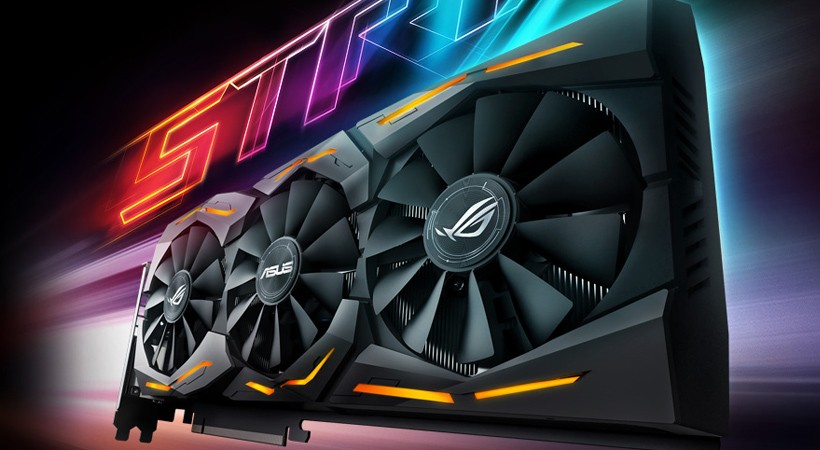 The release of the very first AMD RX 480 was met with both celebration and dismay. Celebration, because finally there exists a mid-range graphics card that can ride with the best on the market. Dismay, because there were some power draw issues causing the RX 480 to run hotter than expected.

While it isn’t a very big issue, Asus took this to heart and went back to the drawing board redesigning, tweaking, and modifying until we arrive at the newest card to hit the GPU market – the Asus ROG Strix RX 480.

The Asus ROG Strix 480 joins the rest of the ROG family as a premium mid-range GPU, offering great performance at a reasonable price. The OC version comes with a boost clock of 1330Mhz, and true to ROG Strix form, uses the DirectCU III Wing-Blade fans that are also present in the high-range cards.

One should note that this IS A BIG CARD measuring in at 29.8cm x 13.4cm x 4 cm. I was very surprised at the size and weight of the card, as it did not feel cheap at all.

The box comes with a quick setup guide, a driver cd (if you still have one of those drives), a couple of wire velcro wraps, and the code for World of Warships. 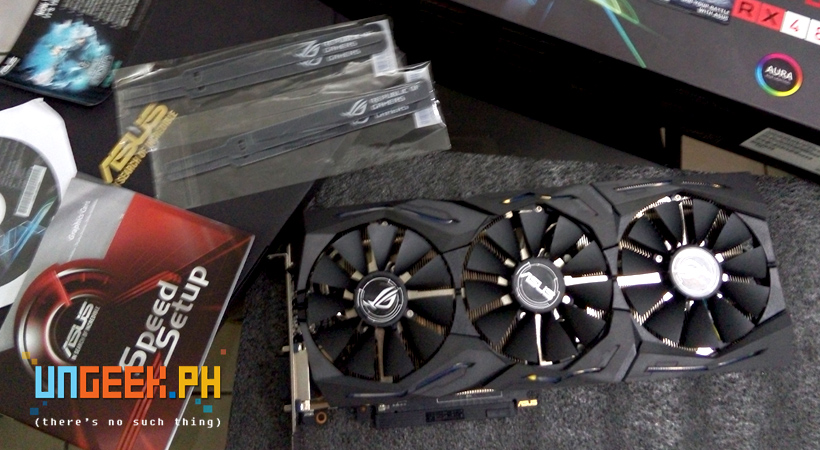 To be honest, I initially wasn’t very enthusiastic about the LEDs at the start because I was afraid it would overpower my case’s own LEDs. I was very surprised to discover that the intensity is minimal, and rather than acting as a light source, the LEDs simply make for a very good accent lighting.

I was also quite pleased with the software that came with the card – the GPU Tweak II. This program is perfect for people who want simple boosts to performance without a lot of trouble tweaking the settings. For enthusiasts though looking to overclock the card to its full potential, I recommend using AMD’s Wattman utility.

The Asus ROG Strix RX 480 is a beast of a card. It plowed through two of my GPU-demanding games like a walk in a park. I used Doom to test the 480’s capabilities on the new Vulkan API and Witcher 3 for DX11. Unfortunately, games are expensive (no to piracy!) so I only have these two AAA games to test.

On Doom, the card went beyond my expectations. I routinely hit 120+ FPS and this is on ultra settings (I just maxed everything out hehe). With a slight lowering of a few settings, I’m sure this card will let me hit 144hz, which is perfect as the card opens up the opportunity for a 1080p 144hz monitor upgrade path. However, I only have a 60hz monitor available, hence I’m not able to test out this functionality. 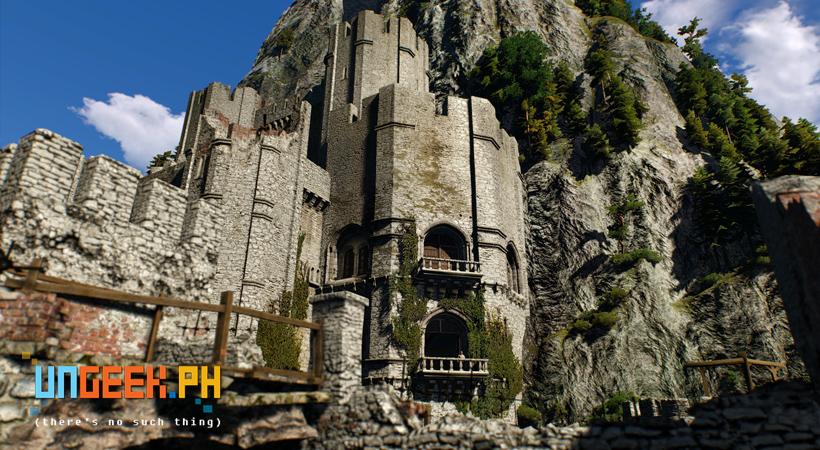 On Witcher 3, I constantly get between 55-65 FPS. Considering Witcher 3 runs on Dx11 and is considered a more Nvidia-friendly game, the RX 480 holds its own ground as a 1080p graphics card. Settings were, of course, set to Ultra, with the exception of Nvidia proprietary settings like Hairworks or Gameworks.

So why am I very excited for this card, versus other cards on the market?

For one thing, the card runs quiet and cool. The RX 480 reference cards were notorious for being hot and loud, so I’m extremely pleased with Asus’ take on the RX 480. Not only is it quite cool at 80 degrees C (which, I’m told, is perfectly normal temp for the card in a tropical country), it’s also extremely quiet. I hit max 2100 RPM with the OC mode in GPU Tweak II and I can’t hear a thing.

While there’s really no need to OC the card as it performs superbly in both Witcher 3 and Doom, I still tried a more aggressive fan curve and undervolted it by a bit. The results were a 6 degree drop in temperature down to 74c max. However, the tradeoff is an increased fan RPM to 2500. At that level, the fans are now audible, yet still acceptable or not jet engine level. In fact, the only way I can hear it is if I turn off all fans in my room, and set my case fans down to its lowest settings. Still, I feel 2500 RPM is the max I’m comfortable with.

The GPU Tweak II does have its limitations for a more thorough custom setting. On the other hand, it’s perfect for a one-touch-and-forget-everything application.

Lastly, I performed some benchmarks using Unigine Heaven and Firemark. The results are posted below. Even if it didn’t get a really high score (partly because I only use an i5-6500), I reckon this is more for the enthusiasts than an average gamer.

All in all, the Asus ROG Strix RX 480 does what it meant to do – be the best 1080p card, rivaling the Nvidia’s GTX 1060. While the GTX 1060 might see more performance at this level, it also comes at a higher cost. There’s also the forward-looking nature of the RX 480, wherein newer games are expected to take advantage of DX12, a field where the RX 480 dominates. 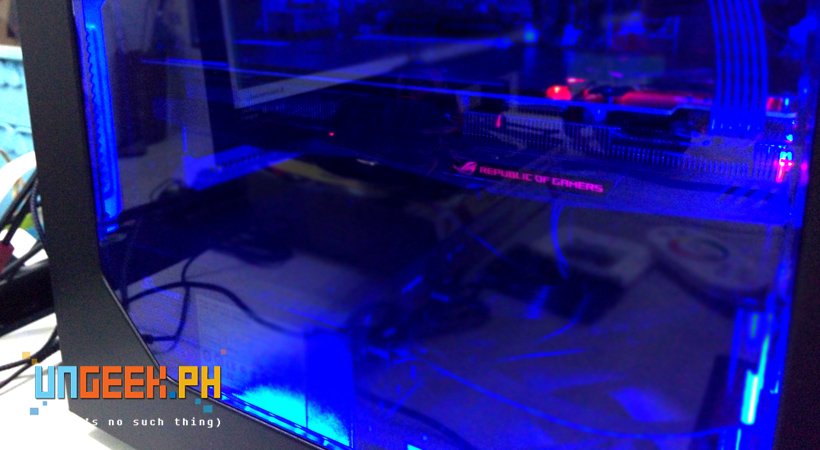 The ASUS ROG Strix RX 480 will be priced at roughly 18-19k per ASUS representative. It’s currently out of stock but they will replenish by September. If you feel that price point is juuuust a bit out of your budget-range, don’t worry because we got word from ASUS that they will be releasing this as well: 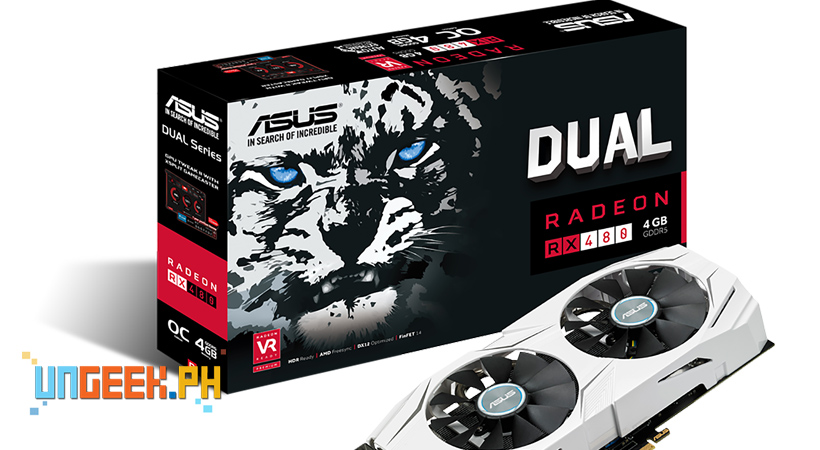 The ASUS DUAL RX480 is the more budget-friendly cousin of Strix and is priced at around 13k only. There are varying differences in performance and specifications, of course (you get more out of the Strix RX480), but these ones will do the job right. We’ll update this post once we get more info on release dates and actual SRP price.