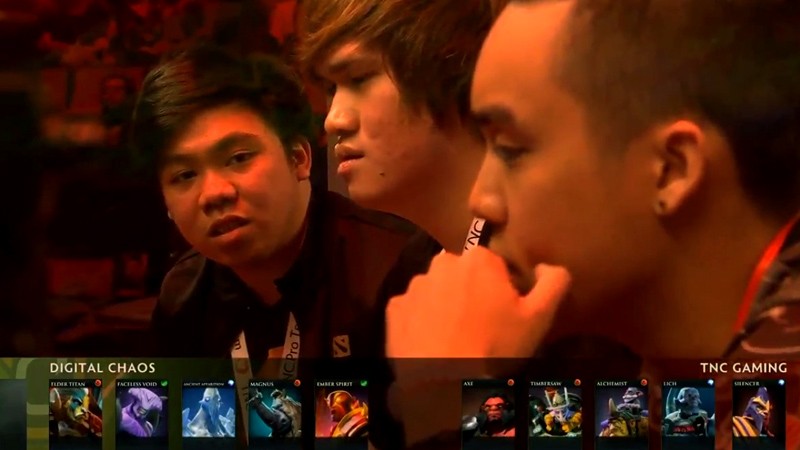 Day 4 of The International is in the books and after another day of great Dota, only 5 teams are left in the running to claim the Aegis and the prestige of being called the best Dota 2 team in the world! Oh, and who could forget, 9 million dollars too! Will the Filipino dream continue with TNC breaking into the top 6? Will Fnatic survive the Team Liquid juggernaut? Read on as we take a look at some of the highlights of day 4!

DC conquer TNC and claim the right to face Ehome

It was nothing short of a magical run but the dream has ended for TNC as they lose to DC 2-1 and are eliminated from the tournament. After a blistering game 1 from the Cinderella team of the tournament, TNC lost a heartbreaking game 2 and eventually moved on to crash and burn in game 3.

With certainly nothing to be ashamed of, TNC has proven everyone wrong. From almost not qualifying for TI6 to visa problems preventing them from travelling to the venue, their journey has not been an easy one but as hard as the path was, the result was definitely sweet and well earned. They have earned the respect of the more well renowned teams and have etched their mark in Philippine e-sports history, taking home a prize of around 500 thousand dollars and the furthest place that a Filipino team has ever reached in the most prestigious Dota 2 tournament in the world.

With TNC out of the running, the collective hopes of the Filipino’s rest in the hands of one Djardel Mampusti, otherwise known as “DJ”, arguably the best Dota 2 player that the Philippines has ever produced. Fnatic took the fight to Team Liquid, a team widely recognized and one of the teams who was thought of to take their TI6 as deep as the finals, and boy did this matchup not disappoint! Fnatic cruise to a 2-0 victory over Liquid but the games were full of highlights, great team fights and wonderful solo plays! Peep the highlights of the match below!

w33 and Misery must be laughing all the way to the bank now as their stellar run continues in the lower bracket, they now await the winner of the Fnatic and MVP matchup. We remember how w33 and Misery was let go by Team Secret after they raised the trophy at the Shanghai Major and they have not taken lightly to that unfortunate event. Building DC along with Moo, Saksa, and Resolution, they have forged their own path and are now currently placed as top 4 in this tournament, defeating the likes of LGD, TNC, and just recently Ehome along the way. If they can find a way to sustain momentum, their next opponents may be in a world of hurt as this team, heralded as the underdogs, look to claim the Aegis.

As a running tradition, everyone was treated to an all star match where lucky participants get to play alongside select pro players in a match that celebrates the fun in Dota 2. Team Kaci and Team Slacks took to the stage and as the participants were pitted against each other in a 10 v 10 match, little did everyone know that this match would be an introduction to a new hero reveal that is possibly one of the worst kept secrets in Dota 2. See the video below to see how it all went down!

As we look ahead to day 5, we see how the tournament has claimed 11 teams already and out of the teams that received a direct invite to the tournament, only MVP remains standing. The rest of the teams have gone through hell and back to be where they are now and none of them are ready to give up the fight just yet. Bittersweet as it is, Fnatic and MVP will face each other to represent the SEA region going into the top 4, a fine accomplishment nevertheless and both teams must be proud of what they have achieved thus far. Will EG be the first grand finalist or will the boys from Wings gaming take their unpredictable style and go all the way? Can DC sustain their momentum and break into top 3? Get hyped people, we are a few hours away for another set of unbelievable Dota 2 matches! Let us know your thoughts on who goes on to advance to the next round!