Believe in Fate! “Kimi no na wa” is the Blockbuster Hit Anime Film for 2016 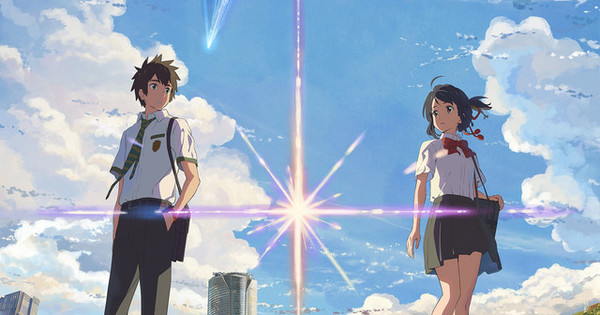 If you were to take music band Journey’s “Don’t stop believin” and Savage Garden’s “I knew I loved you before I met you”, add the supernatural and some elements from that late 90’s film “Deep Impact“, you’ll get this fantastic feel-good animated movie called “Kimi no na wa” aka “Your Name“.

To date, it is 2016’s highest-grossing film in Japan, a position rightfully claimed by the film. It has earned  approximately about $111 million USD (equivalent to the Japanese Yen).

I was definitely taken by surprise even though,to be honest, I’ve read the spoilers. Seeing this film as I watched the story unfold is pleasantly entertaining. But of course, for maximum feels and enjoyment DON’T read the spoilers due to the plot being heavily dependent on the things not being as clear-cut as they seem. The film makes use of “Body Swapping” as its plot instrument where basically the male co-protagonist wakes up in control of the female co-protagonist and vice versa then culture and gender shock sets in and the rest unravels as a journey of discovery. Both co-protagonists then try to figure out what going on, try to make best of the situation, and eventually help each others’ lives from their own perspective and approach to life.

The use of cliche characters such as the “city boy” and “rural girl” does not make the story any less engaging. In fact, its the film’s elements of ordinariness and normalcy (thrown together in an unnatural yet subtle circumstance) that create complications which pull its audience towards the story’s climax with much anticipation to see the co-protagonists achieve their goals and finally see each other face to face! (ala “AlDub” haha)

After seeing it, I believe this film deserves a live-action rendition whether it’s via a TV series or another full-length film. I have resigned to the fact that telling you guys how great the film is will not do it justice and, for that, I highly recommend this film for you geeks out there and (even more so) for non-geeks alike. Directed by Makoto Shinkai, his staff announced that the film will be distributed in 85 countries and regions and I sincerely hope that the Philippines is one of them.

- Advertisement -
Previous articleZoids are Back and More Realistic than Ever!
Next articleAll The Big Video Game Titles Coming this 4th Quarter 2016