Do you love role-playing games? How about puzzle games? If you answered “yes” to both questions, then Puyo Puyo Chronicle on the Nintendo 3DS is the perfect game for you. 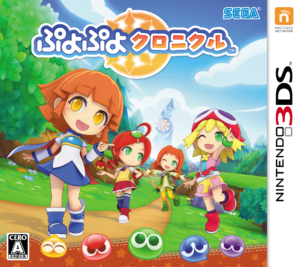 A short background on Puyo Puyo for those not familiar with it – Puyo Puyo is a series of puzzle games developed by Sega where players have to match little blobs called “Puyos” by color to remove them from the puzzle grid (think Bubble Bobble and Chuzzle). The games primarily feature a versus mode where obstacle Puyos are dropped on the opponent when you clear multiple Puyos on your own grid. Puyo Puyo games also include a fantasy story backdrop – in them, a young magician girl named Arle along with her critter companion Carbuncle go on quests to save the world from the mischievous antics of the Dark Prince Satan (I know, a bit extreme don’t you think?). Puyo Puyo Chronicle continues Arle’s adventures in Primp Town, where she finds a mysterious book that transports her and Carbuncle to another world. Together with a new friend, they have to figure out what’s going on and find a way back to their own world.

Puyo Puyo Chronicle brings a new aspect to the franchise by including role-playing game concepts such as character building and map exploration. Unlike previous Puyo Puyo games which were similar to visual novels, players now have the freedom to go around the map, talk to other characters, and drive the story on their own. Players can also customize their character skill sets and stat builds.

Naturally, battles are done in Puyo Puyo style. Rules from the previous Puyo Puyo games are included in Chronicle, so players can adapt their puzzle style to what suits them best. Players can take on the puzzle battles by themselves, or they can cooperate with other Puyo players via local connection to take down tough bosses. Puyo Puyo battles are also very voice-intensive (Arle and friends shout out the names of their special moves as they clear Puyos), so crank up the volume and prepare for simultaneous shouts of “Ice Storm!” and “Heaven Ray!”. The game is scheduled for a December 2016 release in Japan (just in time for Puyo Puyo’s 25th anniversary), so there’s still plenty of time to stock up on your puzzle skills! Let’s help Arle and Carbuncle get back to Primp Town safe and sound!