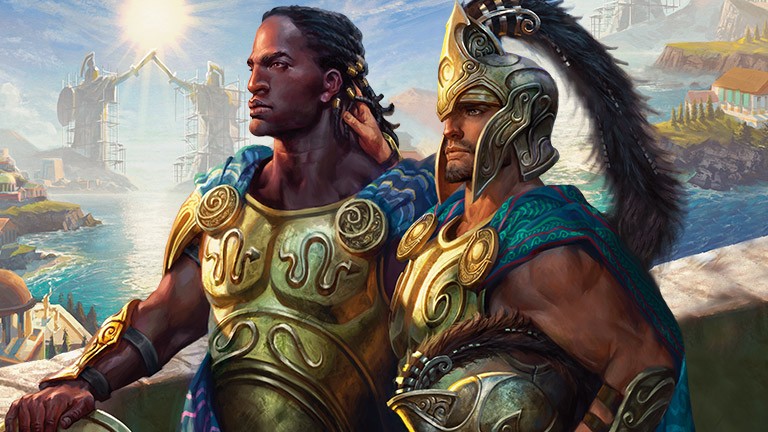 Wizards of the Coast, publisher of the wildly popular collectible card game Magic: The Gathering, has made great strides in recent years in ensuring that they portray equal representation in their games. Take for example this character from the 2015 release, Fate Reforged, wherein they introduced the warrior Alesha, Who Smiles at Death, a boy who chose to be a woman upon declaring her war name to her tribe. Or their 2016 release, Kaladesh, which is set in a technologically advanced and magical version of India.

In 2013, they alluded to a same-sex couple in the Greek-inspired world of Theros. Look at the flavor text of the card Guardians of Meletis:

“The histories speak of two feuding rulers whose deaths were celebrated and whose monuments symbolized the end of their wars. In truth they were peaceful lovers, their story lost to the ages.” 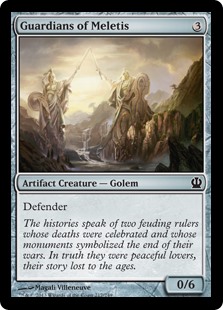 Doug Beyer, writer and designer in Wizards of the Coast, would later confirm that to best of his knowledge, this was the first explicit mention of a same-sex relationship on a Magic card. But for the last 3 years, the true identity of the Guardians of Meletis have remained a mystery..

..that is until now. Introducing, the Guardians of Meletis: 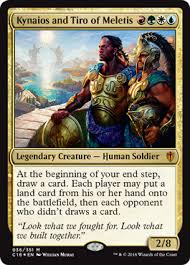 The Magic the Gathering webpage also talked about the lore behind Kynaios and Tiro in an article released last night:

“In the age of antiquity, the humans of the region that would one day become the largest polis on Theros were ruled by the tyrant Agnomakhos, an immortal archon. Unchecked for generations, his power grew as he carved out a mighty empire. Kynaios and Tiro, joined by their love for one another and for freedom, rose to challenge him. The people rallied to their cause, and Agnomakhos was defeated. The polis of Meletis was founded on the ruins of Agnomakhos’s empire as a beacon of freedom and enlightenment, and its people chose Kynaios and Tiro to be its guardians.”

How awesome is that?!? Personally, I find it great that big companies like Wizards of the Coast (which is owned by Hasbro by the way), has made it a point to ensure equal representation in the products they release. We are living in a different world, compared to when Magic was released 20 years ago, so it’s nice to see Wizards of the Coast adapting to the times.

Look for Kynaios and Tiro of Meletis in their Nov 2016 release of Commander decks!

- Advertisement -
Previous article
John Hanke, Creator of Pokémon GO, is attending the “Pokémon Fest: The 1st Philippine Pokémon Festival”???
Next article
Take a Look Inside the FUN-tastic Awesomeness of the Animax Carnival 2016!