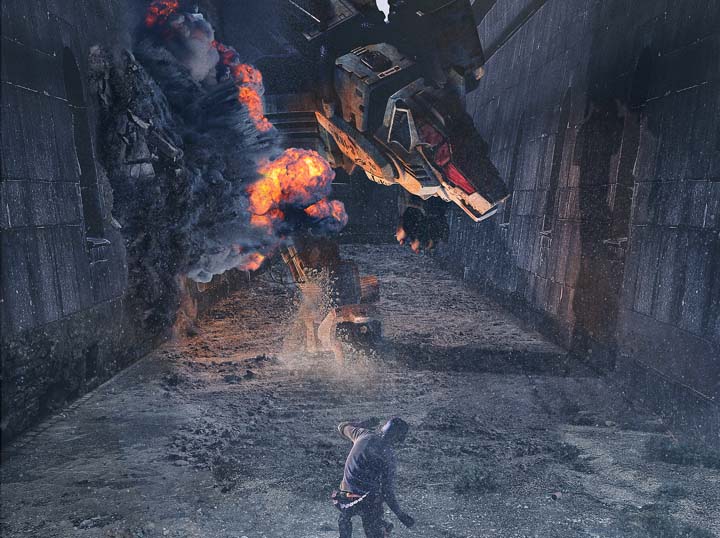 Takara Tomy is such a tease. Without revealing anything concrete as to what the full extent of their pet project involving the Zoids IP is, they recently updated their teaser website by adding a Picture Gallery where the first of two images is a very familiar Zoid from the Helic Republic as it crashes its way with fiery resolve.

“My mission was a simple one. At least, that’s what I thought. I should have been sitting back drinking a beer after my shift, humming my time away. You know, Command Wolves weren’t made to be scouts. It just came smashing through the wall. Picture it. I keep praying it was all just a bad dream.”
– from the memoirs of an Imperial Army soldier

The Command Wolf is one of the most recognizable zoids mass produced by the Helic Republic. It is a standard front-line weapon and have been used in strike, recon, and assault operations, among others. Well known Command Wolf pilots are Irvine from the anime Zoids Chaotic Century & Brad Hunter from Zoids/Zero.

The next graphic is a triplet of Molgas dune racing.

“Now Molgas, they’re the oldest but most superior Zoids around. These beauties have no equal in versatility. For mechanics and pilots, the sheer amount of variation may be a pain in the ass, but the results they produce are outstanding. All I can say is these machines are absolutely crazy.”
– a certain Zoid mechanic

The Molga is one of the first Zoids created by the Zenebas Empire designed for use in large numbers. In the old Zoids webcomic, Rokurou is an Imperial Ace Pilot that was given his own Molga and customized it (Rokurou Special) that he was able to defeat a Gojulas Giga. There was even a 1/1 scale version of a Molga on display back in the days.

I hope Tomy Takara follows a similar take equal to what Square-Enix did for FFXV which is they developed the game, made a feature length CG animated film (or live-action I’m not to picky), and a short anime series.

So Tomy, please hear our plea!

- Advertisement -
Previous article‘The Delve’ is Coming to Descent’s Road to Legend App!
Next articleUS Government falls in this New Series but Don’t Despair! The Designated Survivor is now in charge.