Our favorite 8-Bit Blue Bomber WILL BE BACK in Pixel Tactics! 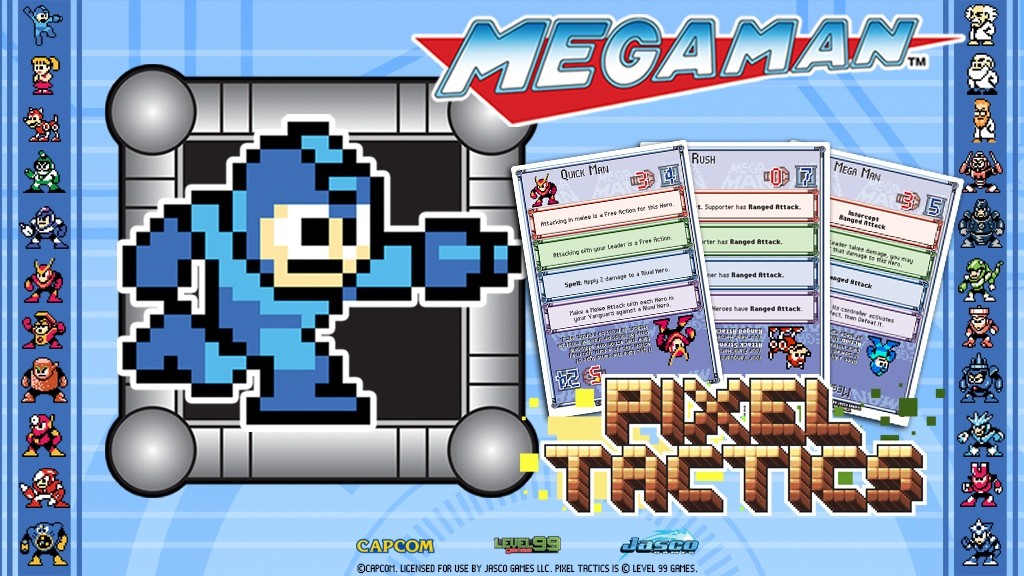 It’s really the perfect marriage of both old and new concepts. The 8-bit Megaman art and fluff really fits well with Pixel Tactics, where the latter actually drew inspiration from! So merging these two properties is really a no-brainer. 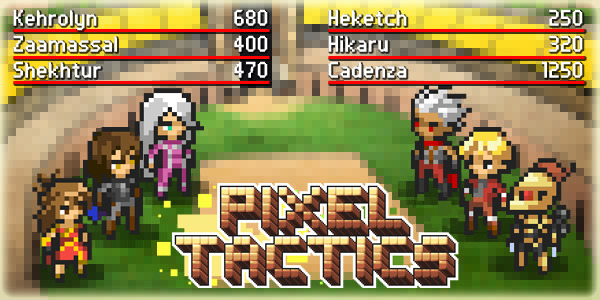 Pixel Tactics has been around since 2012 and has proved to be one of Level 99 Games’ most popular titles. In a nutshell, this game is a 2-player head-to-head hand-management card game with variable player powers. Check out the video below:

Each player has an identical deck of 25 cards, from which they draft a leader from their inital hand. The leader’s abilities alter vastly the strategy and playability of every other card in the deck, greatly upping the depth and replay value of the game.

In the game, players take turns placing cards in various sections of the board, where each card can activate in different ways, taking on offensive capabilities in the front rows of the unit, or support powers in the back rows. Cards can also be played as one-time orders – powerful single-time effects that can turn the tide of battle. Play continues until either player’s leader is defeated. 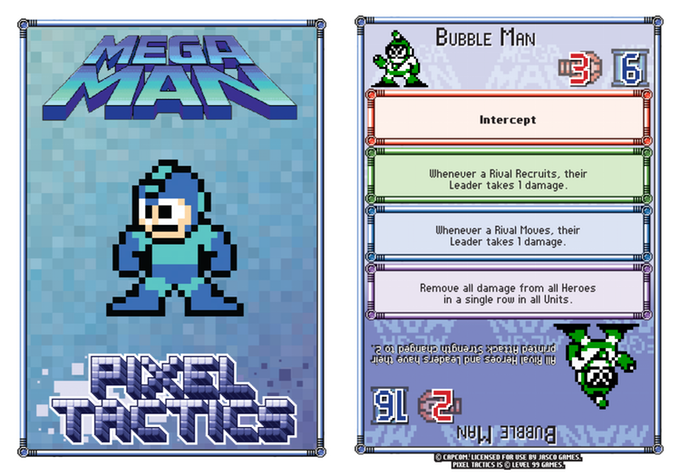 As you might expect, just by looking at 1 card in the game, you can see that there are many approaches on how to use it! And the core game has a lot of expansions and variants since it’s initial release, so it is really never the same game twice!

According to Brad the game has been in development for 2 years now and said: “I’m very honored to have the opportunity to bring Mega Man and every classic Robot Master in all their pixel glory to the table top card gaming arena.”

Every classic robot master you say? Well let’s take a look at what we can get once the campaign goes online!

The game will be packaged in 2 different editions: 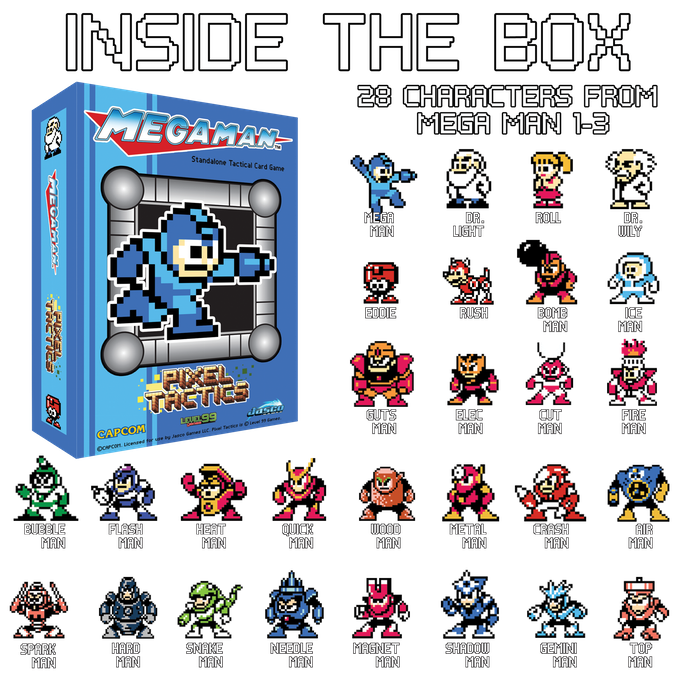 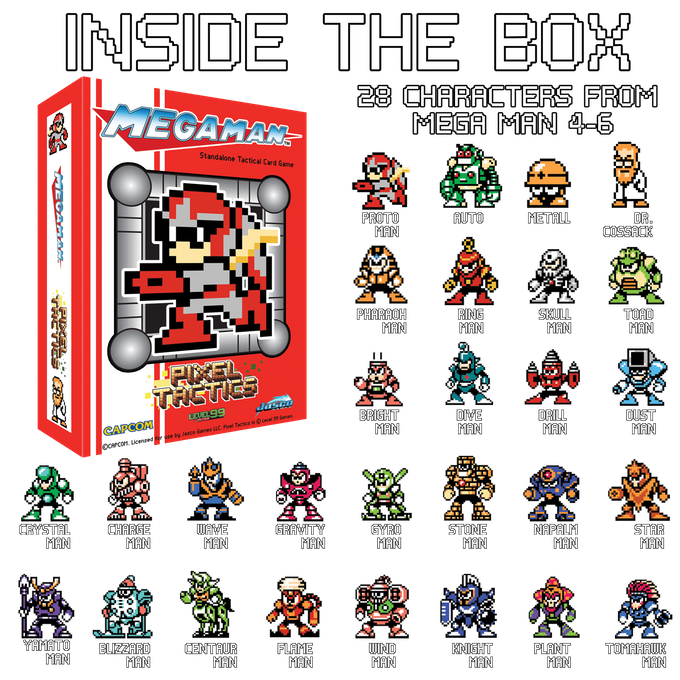 …And the Protoman Red Edition that will cover the games from Megaman 4-6! Both edition will contain 56 cards with 28 different characters.

But of course you would want to have it all right? Where there are different pledge tiers that you can choose from! Including one that comes with the official playmat. 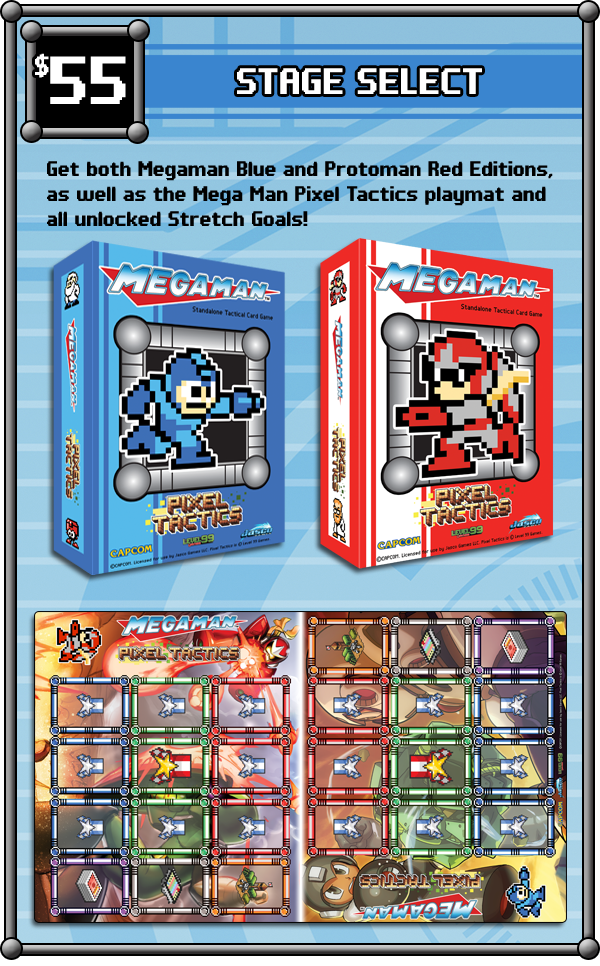 There are a lot of stretch goals to be unlocked in the campaign, can you guess who the characters are? I think I see Bass…

Excited? Well the project will be going live and to be hosted by Jasco Games IN A FEW DAYS! Better keep your wallets at the ready by then!