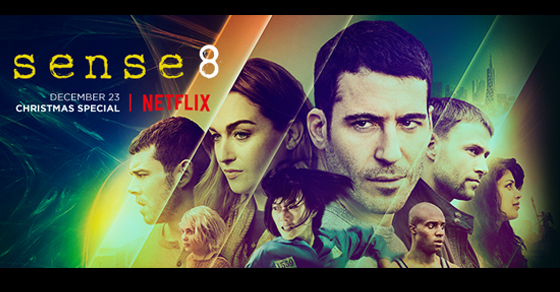 Premiering this Friday, December 23, on Netflix is “Sense8: A Christmas Special‘.

This 2-hour holiday special welcomes back the “Sensates“, a group of eight strangers who have mental and emotional connections to each other, making them able to sense and communicate with each other, as well as share their knowledge, language and skills. The show tells the story Capheus, Sun, Nomi, Kala, Riley, Wolfgang, Lito and Will who are all connected to each other.

Take a sneak peak of this 2-hour special, here’s the official trailer.

In the trailer, we can hear Sun narrates how Sense8 are all connected. Also, while still in prison, Sun helps Wolfgang in a fight, and it seems that the gang are much stronger together. Kala and Wolfgang are still heartbreaking, and Will and Riley are still the only ones who have met in real life. And of course the protagonist of the show, Whispers is up to no good.

We also get the first glimpse of  Toby Onwumere as Capheus, whose role was previously played by Aml Ameen.

In an interview, the show’s co-creator Lana Wachowski explains why they did a holiday special.

“…Holidays can make you feel so connected, and isolated and alone. I want to tell a story in this first episode about time and presents. How the new lives of these characters were experiencing made them feel powered like they can do anything as long as they are together, and the same time making them feel vulnerable and almost most alone they ever felt.”

Here’s the full clip of the interview.

Seems like we’re in for another thrilling and action-packed episode of Sense8! Best mark your calendars for December 23 as Sense8: A Christmas Special premiers on Netflix.

Netflix has also announced a 10-episode Second Season which will be released on May 5, 2017.