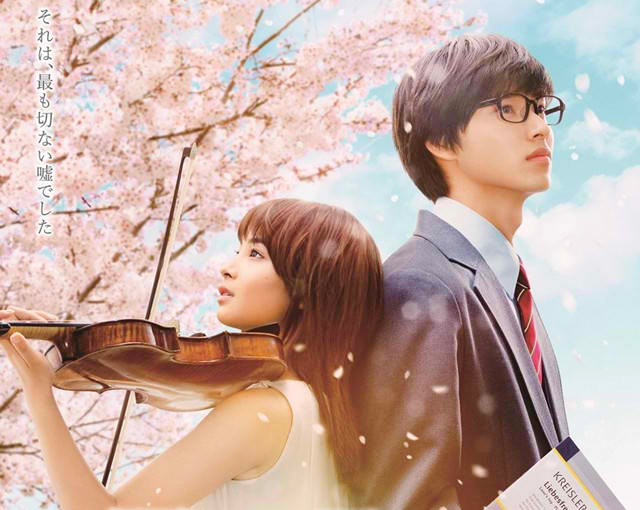 Based on the award-winning and best-selling romantic manga series of Naoshi Arakawa‘s “Shigatsu wa Kimi no Uso“, the live-action movie “Your Lie in April” (四月は君の嘘) debuts today Dec 7 in several cinemas in the Philippines nationwide.

“Your Lie in April” tells a story of the wonders and value of love, but also the pain, tears and heartbreak that often accompany it, as described by Director Takehiko Shinjo in an interview.

I met the girl under full-bloomed cherry blossoms and my fate begun to change.

The live-action movie “Your Lie in April” premiered in Japanese cinemas last September 10, which was in third place on its opening weekend. It was reported it earned ¥244,602,900 (est. PHP114 million) in gross with 200,036 tickets sold.

The movie follows the story of characters’ Kaori Miyazono (Suzu Hirose), and Kōsei Arima (Kento Yamazaki), who are both musical prodigies. 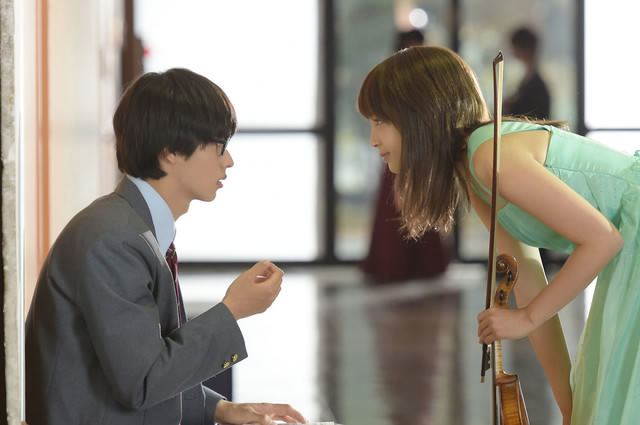 Arima used to be a piano prodigy, but he suddenly stopped playing the piano when a tragedy happened in the past. Later in life, he met a free-spirited violinist, Kaori, under a full-bloomed cherry blossom tree. The two became good friends. Arima was able to play piano again, since meeting Kaori. The two even become partners to music competitions.  Meanwhile, Kaori holds a secret.

Check out this official trailer, featuring the music of Ikimono-gakar – “Last Scene”.

Filming for the movie took only 1 month from October to November 2015. Though both actors Hirose and Yamazaki begun practicing playing the violin and piano respectively 6 months prior the start of filming. The result of the practices were evident on the final cut of the movie, which both actors were able to capture the magnificent movements and emotions of actually playing the instruments.

You can also watch this AMAZING clip from the movie of Arima and Kaori performances on stage of  the classic Camille Saint-Saëns – “Introduction and Rondo Capriccioso”. Enjoy the eargasmic sound of the piano and violin rhythmic and harmonic themes.

For those interested, here’s the music sheet for Camille Saint-Saëns –  “Introduction and Rondo Capriccioso”.

Get ready your tissues and enjoy the heartfelt tapestry of the joy of LOVE and the PAIN of losing it, plus the eargasmic musical scores of the movie. Don’t say we didn’t warn you. Tissues and hankies out!