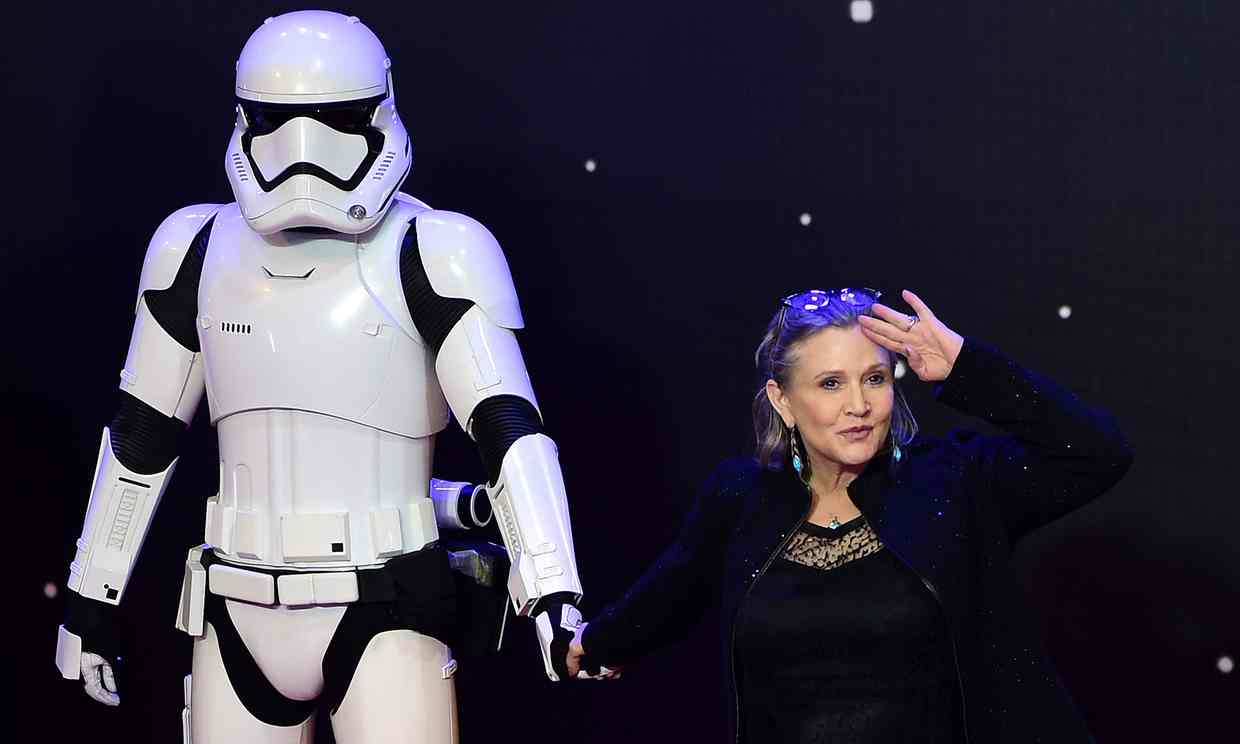 As a tribute to her, here are 9 things that can be remembered about Carrie Fisher.

1. Being in an actress runs in the family.

Her mother is Academy Award Nominee Debbie Reynolds, who is known for her lead role as Kathy Selden in Singin’ in the Rain with Gene Kelly.

UPDATE: Just a day after Carrie died, her mom has passed away early this morning, Dec 29 (Philippine time).

She beat some big names to land the role of Princess Leia, including Jodie Foster and Terri Nunn of singing group Berlin.

Despite the 14 year age difference with Harrison Ford, Fisher’s talent and on-screen chemistry with him guaranteed her spot as Princess Leia.

3. She was not fond of her Princess Leia Gold Bikini costume.

In Star Wars – Return of the Jedi (1983), Princess Leia was then taken prisoner by Jabba the Hutt, made his slave and forced to wear a gold metal bikini to humiliate her.

It was noted in the book The Making of Star Wars: Return of the Jedi she have complained about how difficult it was to wear the bikini. She made a similar comment in a 1983 interview with People Magazine about how uncomfortable the outfit was, saying “I started checking for any bounce or slip after takes. It was, ‘CUT. Hey, how they doin’? The hooters in place?’”.

Despite those wardrobe malfunctions, she was able to display her professionalism throughout the film. Here’s a compilation of behind the scene footage of The Return of the Jedi with Princess Leia in metal bikini.

Bonus: Vintage Photo of Carrie Fisher in Gold Bikini at the Beach

Here’s a photoshoot of Carrie Fisher as Princess Leia having fun at the beach for an article by Rolling Stone, photo by Aaron Rapoport.  The shot was taken at California’s Golden Gate National Recreation Area, the shoot featured Fisher together with Darth Vader, plus an Ewok, and a Gamorrean Guard. 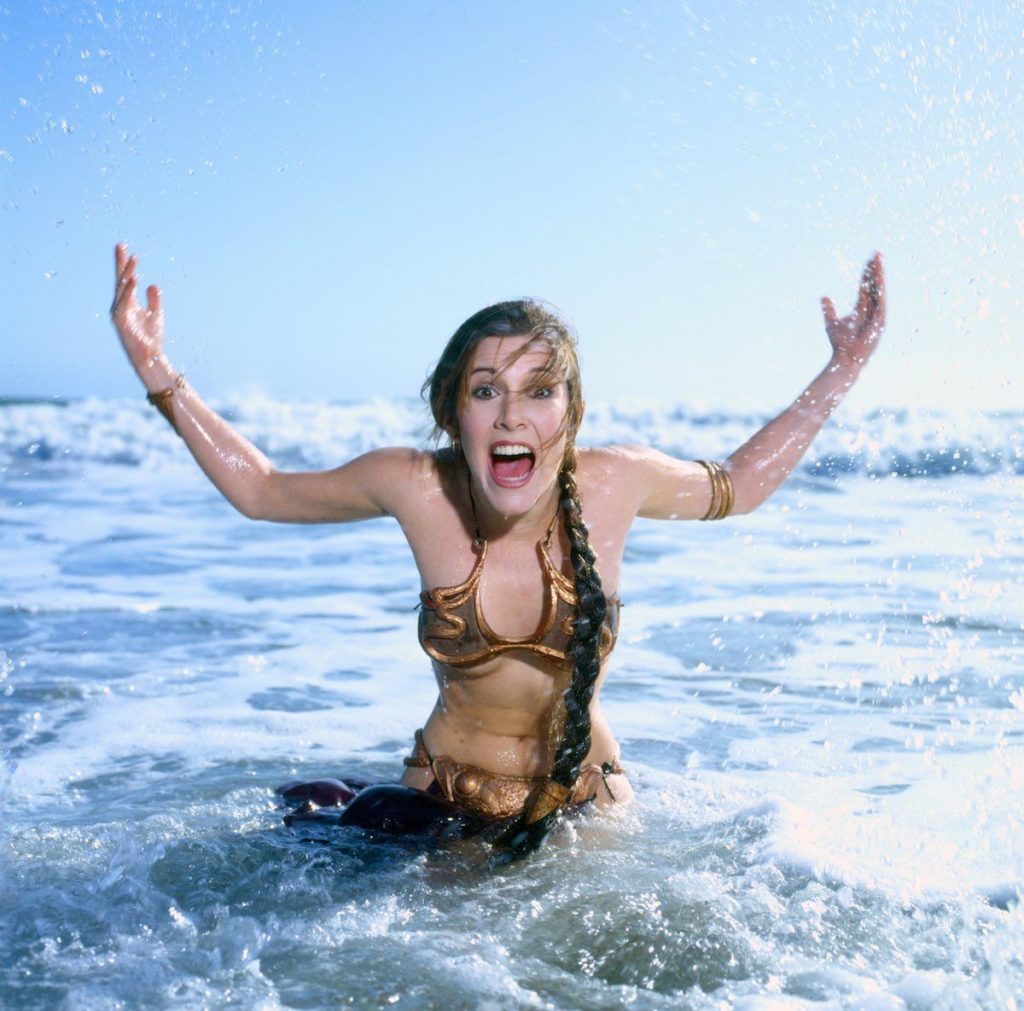 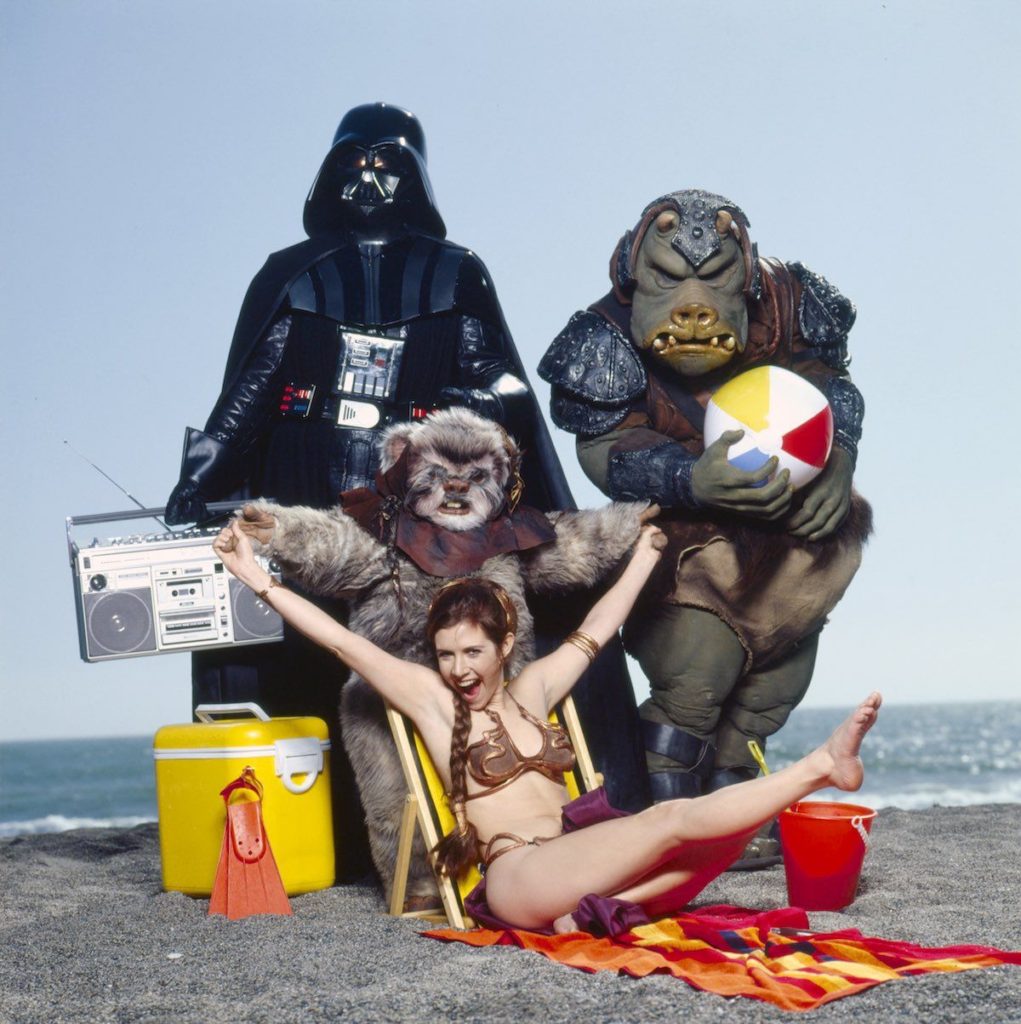 4. She will be in Star Wars: Episode VIII

It was reported, Carrie Fisher has finished filming her scenes in Star Wars: Episode VIII as General Leia Organa last July, and the film is currently in post-production.

5. Her first film was not Star Wars.

Her first breakout role was in Shampoo as Lorna in 1975, starring along side Warren Beatty, Julie Christie and Goldie Hawn. The movie is set during a 24-hour period in 1968, on the eve of a presidential election that would result in Richard Nixon’s election to the American presidency.

Here’s a clip of two of her scenes in Shampoo.

6. She made several cameos as herself in The Big Bang Theory and Sex in the City.

In 20oo, she made a cameo in Sex in the City as Vince Vaungh’s boss in the episode “Sex and Another City”. Check out the clip.

Also, in 2014, she made a cameo as herself in episode of The Convention Conundrum in the show The Big Bang Theory.

Fun fact: this is the first time in real life Carrie Fisher meets Earl Jones, the voice of Darth Vader.

7. She is a acclaimed writer.

Carrie Fisher is known to be humorist. She published her first novel in 1987 entitled “Postcards from the Edge”, a semi-autobiographical book that she fictionalized and satirized real-life events such as her drug addiction of the late 1970s and her relationship with her mother.

Postcards from the Edge became a bestseller, and won the Los Angeles Pen Award for Best First Novel.

In 1990, the book was made into a movie directed by Mike Nichols and released by Columbia Pictures which stars Meryl Streep as the lead character, Suzanne Vale.

8. She is one of Hollywood’s finest script doctor.

Carrie Fisher have worked with several screenplay writers to fix and polish the script of their film. She is responsible for fixing the likes of 1992’s Sister Act, 1998’s The Wedding Singer, 1992’s Lethal Weapon 3, and 1991’s Hook.

Also, she polished scripts for the television series Young Indiana Jones in 1992, which was made by Star Wars creator George Lucas.

9. She Had Just One Request for Her Obituary

In her book Wishful Drinking (2008), she request to be put in her obituary this line “… I drowned in moonlight, strangled by my own bra…”

This is in reference to an amusing anecdotes about shooting the Star Wars – A New Hope in her signature white outfit. Here’s the clip of Carrie Fisher sharing conversation with George Lucas in a HBO Documentary – Wishful Drinking.

In the book, Fisher further shared George Lucas explanation why there is no underwear in space:

What happens is you go to space and you become weightless. So far so good, right? But then your body expands??? But your bra doesn’t—so you get strangled by your own bra.

With that, Fisher adds “Now I think that this would make for a fantastic obit—so I tell my younger friends that no matter how I go, I want it reported that I drowned in moonlight, strangled by my own bra.”

Rest in Peace, dear Princess. You’ll always be in our hearts.