A Frantic and Tense Boardgame That Also Teaches Us About Energy Conservation? Check Out ‘The Big Switch’! 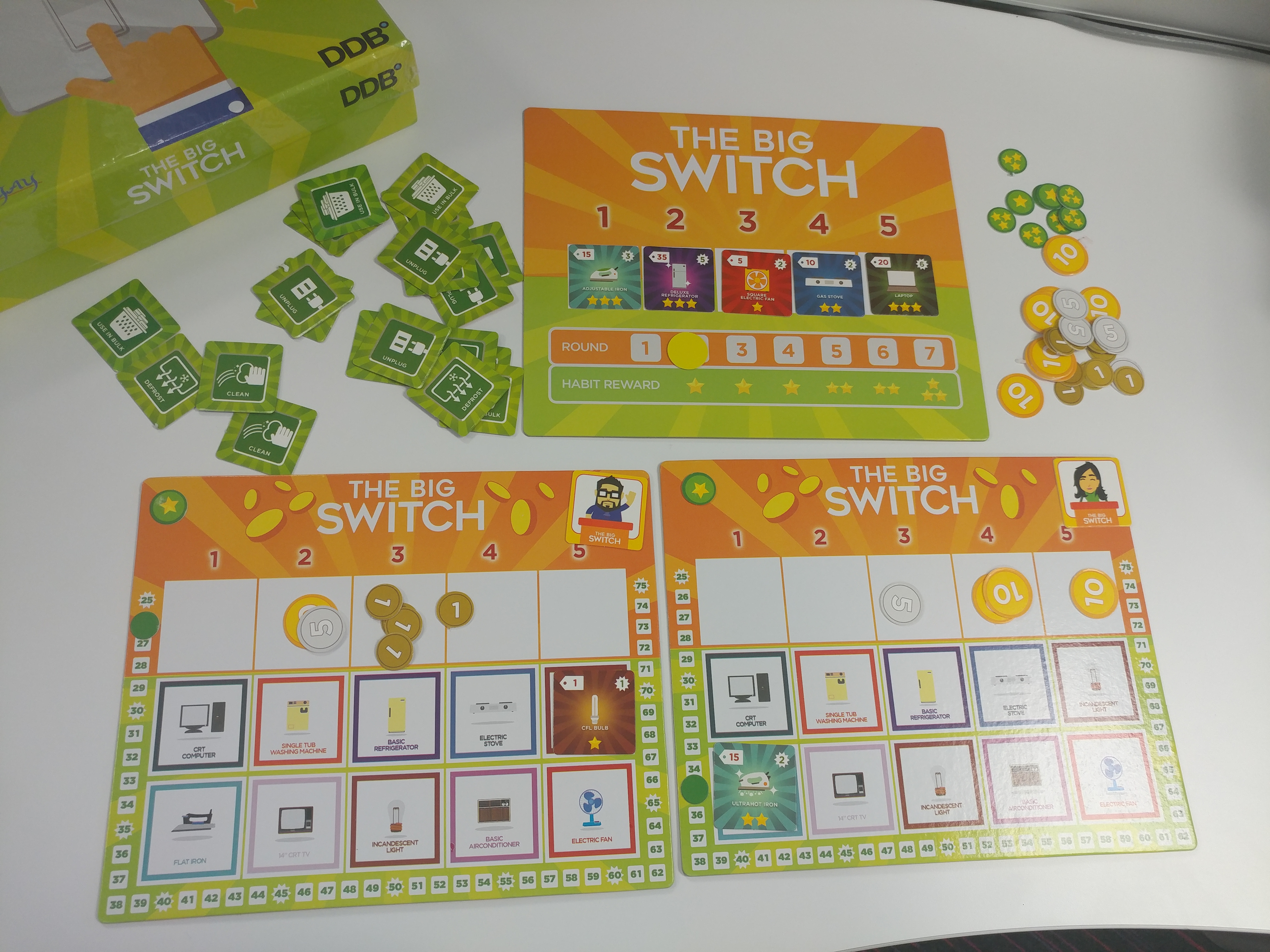 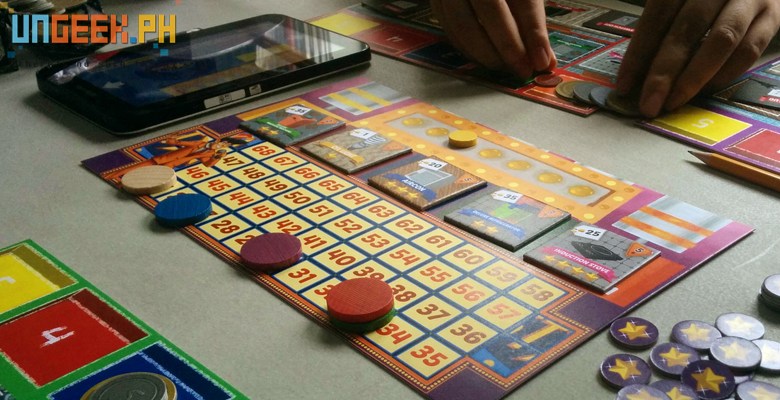 I had the chance to play a prototype of this back in 2015, when it was then called Energy Star. And now that the game is readily available, we finally got the chance to try it out.

At it’s heart, The Big Switch is a game with energy conservation as it’s main theme; with real-time bidding, tile-flipping and dexterity as it’s core mechanics. 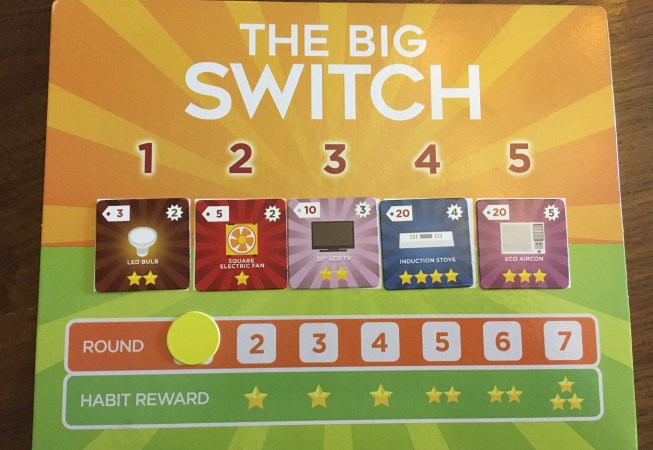 Every round, players have 20 seconds to outbid everyone else in an auction  auctions to buy efficient appliances/equipment for their homes, at the same time simultaneously doing energy conserving actions. Sounds frantic? Well it is! 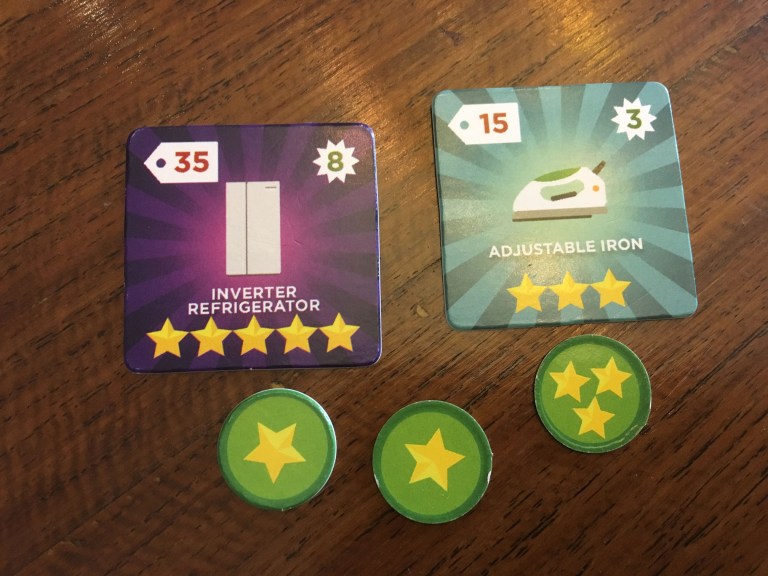 Lets take a look at the components in detail, so we can better understand the game: 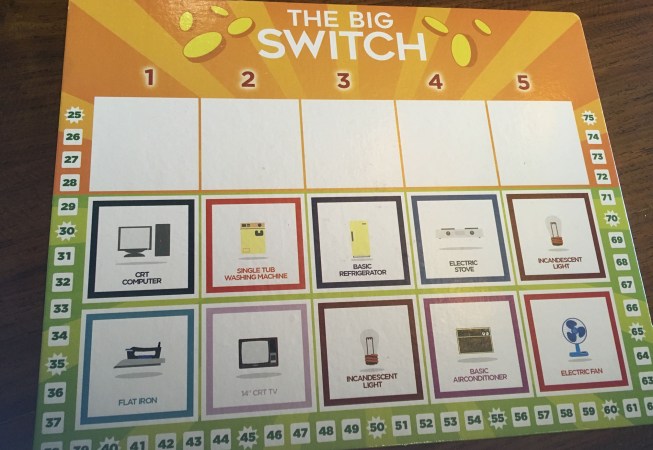 Every player at the start of the game gets a House Sheet which represents your home. Now if you’ll notice, all your starting equipment are currently not up-to-snuff with the latest models. 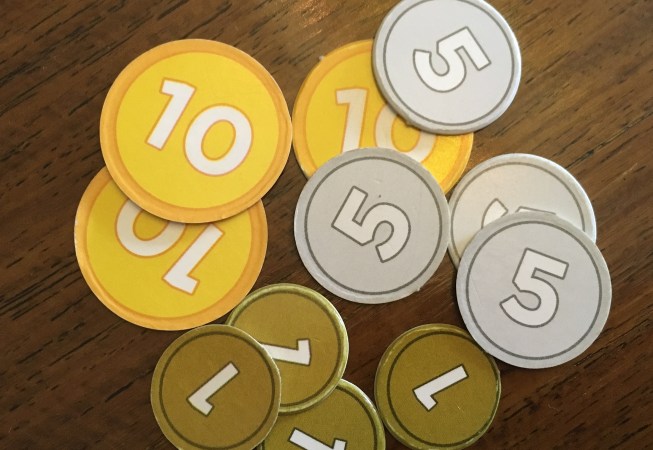 Coins are used primarily for bidding, in hopes that you will get more energy-efficient equipment. There is also a chance that you can get more of these when you are good at conserving every round, adding up to your total savings. 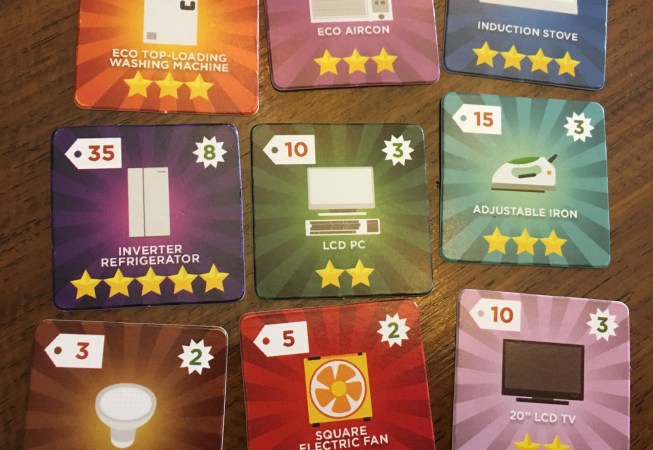 At the start of each round, you get to bid on these Appliance Tiles. These represent the new upgrades to which you will decorate your home with, each with different prices (Tag symbol), Energy conservation (sunburst symbol) and most importantly the Energy Stars, the points you need to win the game.

So now that we know the components, what exactly happens in one round? Lets break it down:

At the start of the game each player receives 25 Money. In Every succeeding round, each player collects money depending on the efficiency of their household. As mentioned you only start with basic equipment on yout player mat, but as you get better appliances through bidding (more on this to follow), your savings increase.

The main meat of the game where it gets a bit tense. During this phase there will be 5 random appliances placed on the Auction Sheet. There are 2 things that happen in this part of the turn, Bidding and Performing Habits: 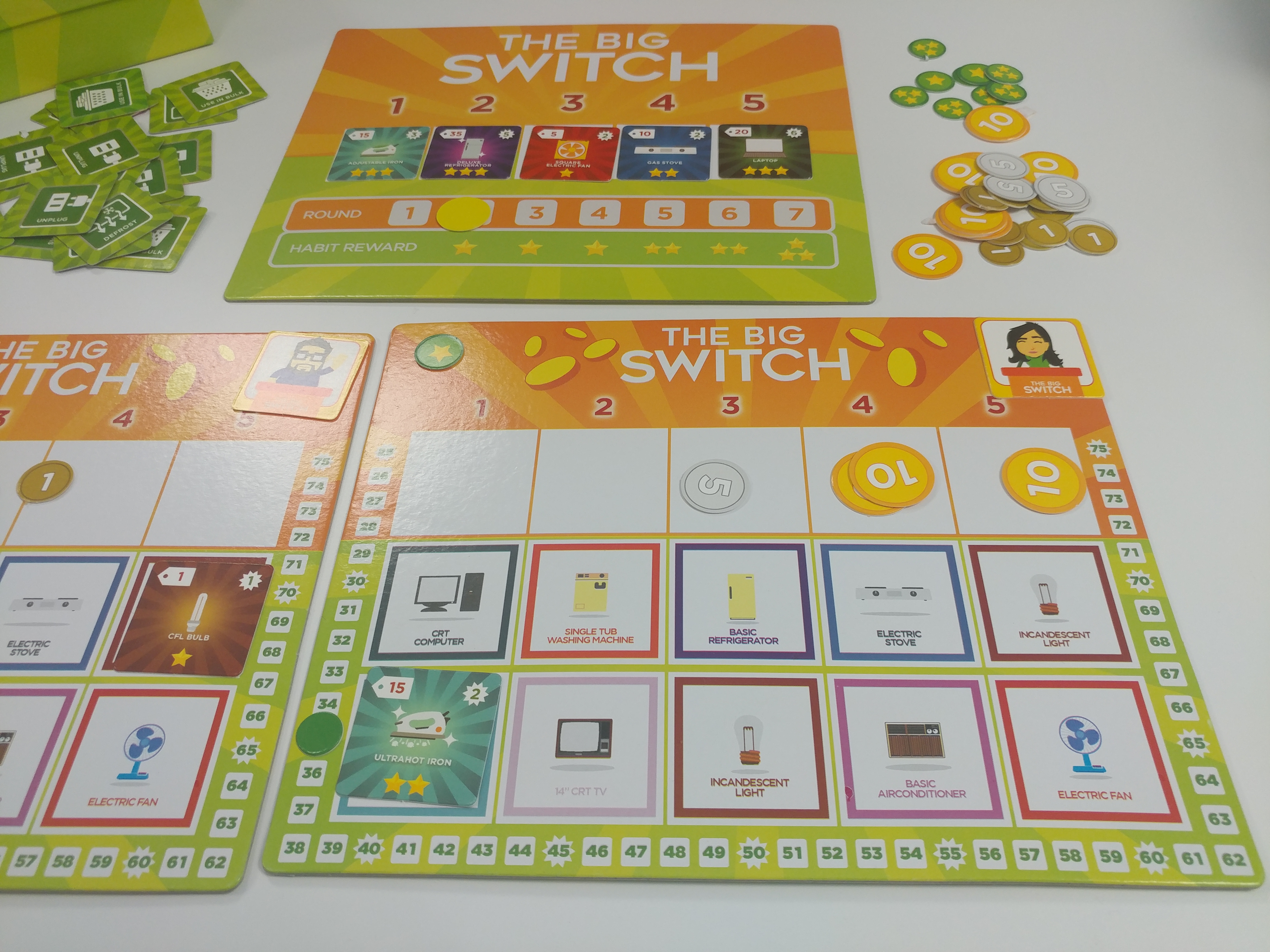 On your house sheet there are 5 numbered white boxes (corresponding to the items currently up for auction that turn) to which you will place your money. You can bid on as many items as you wish, provided that you have the minimum value to spend for it. Since all information is clearly presented in every players mats, you have a general idea when to push or negotiate for a particular item.

Sounds easy? The 20 second timeframe makes things a tad cutthroat! You need to strike a balance on which stuff to get, but also make sure to check your what your neighbor is doing too! Whew! 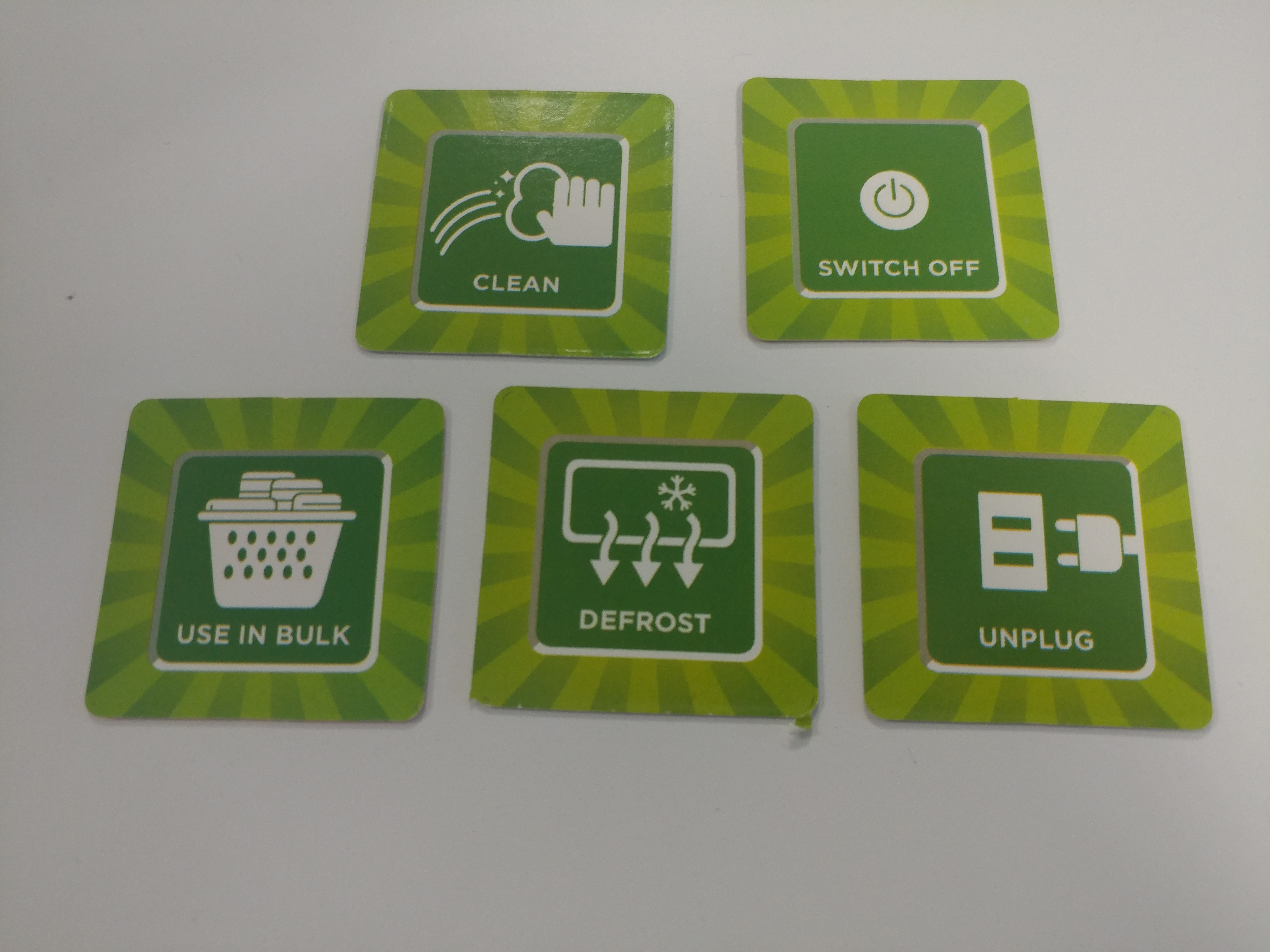 You thought that the bidding auction was tense? Well aside from that you also have to do some energy-saving actions during those 20 seconds. Performing habits is essentially flipping(or “unplugging”) the tiles that you acquired previously, orienting it to you. It takes your attention off a bit from the bidding action, but this is an essential part since you are rewarded Energy Stars at the end of the auction, provided you unplugged all your appliances. 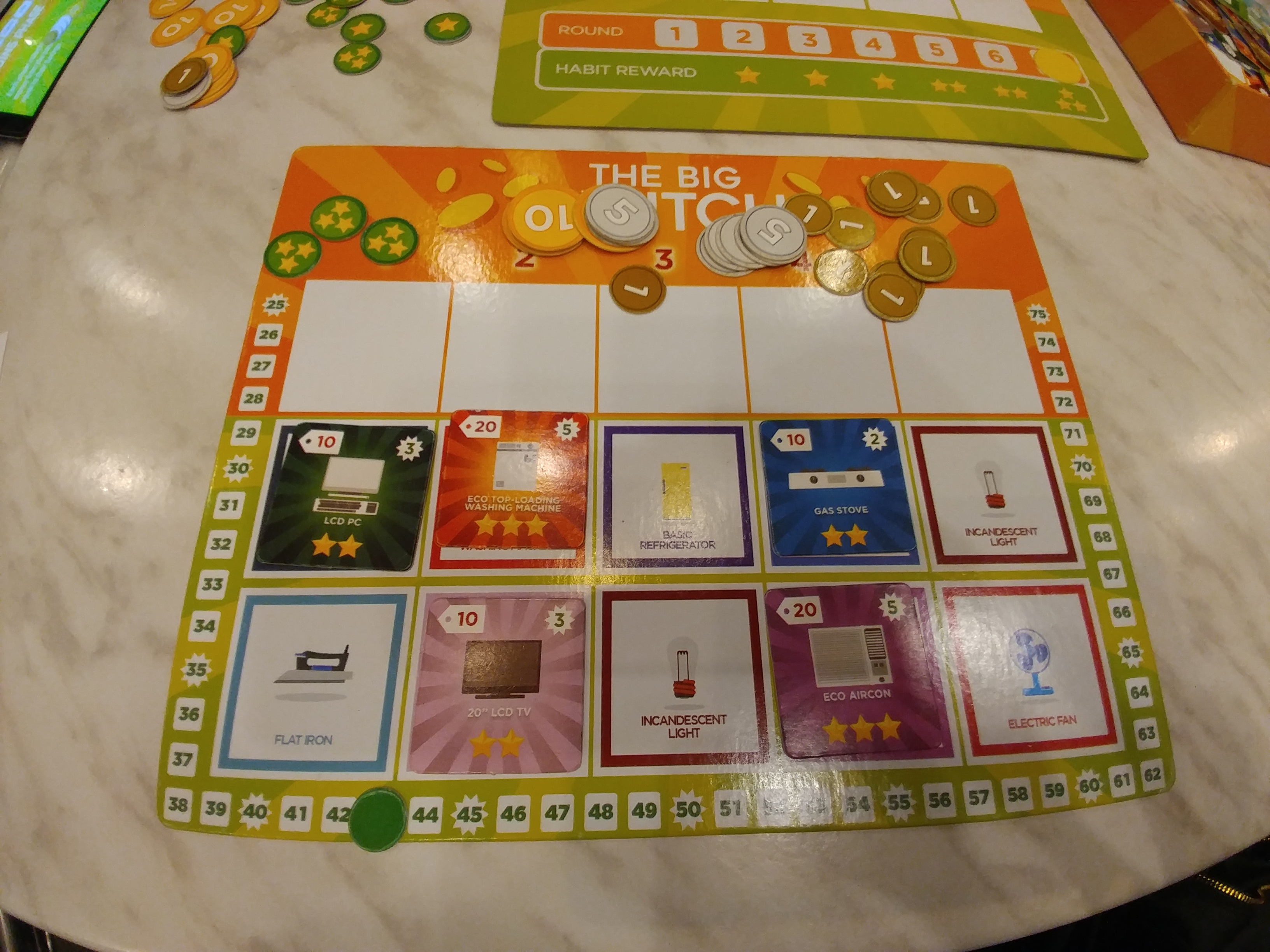 Awarding the Bids from Auction.

Starting from the leftmost item on the auction sheet, players check to see who won the appliance. The highest bidder* simply puts the item in your house mat, taking note of it’s corresponding appliance slot. After you’ve placed the item, adjust your energy savings tracker accordingly (based on the sunburst symbol on the tile). On the succeeding rounds, you will now have a better chance in getting more coins because of your upgraded stuff.

*When you lost a bid, on the other hand, you get to keep your money, so no worries.

Cleanup is simply clearing the auction sheet and moving on to the next round, starting again with collecting your savings.

After 7 rounds the game ends! Count the number of Energy Stars from the appliances you own and the rewards you got from doing habits. The player with the most stars wins! 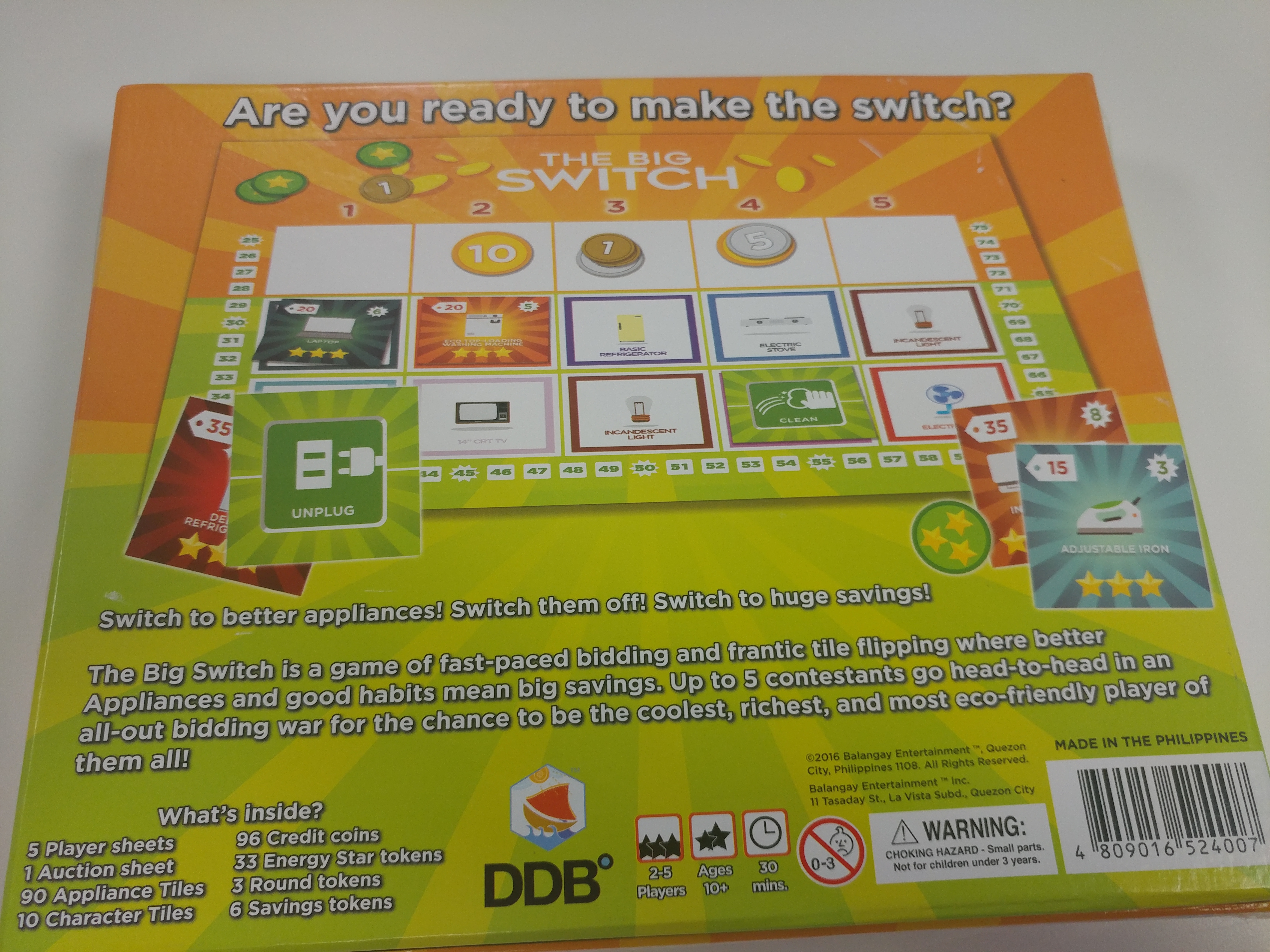 Having played the final version of this game, looking back at the UnPub sessions before, the game still has that tense feeling during the auction phase. Paired with the tile-flipping, it was just as hectic as it was when I first played it, though the game feels a bit more polished this time, as expected after a a lot of play-testing. 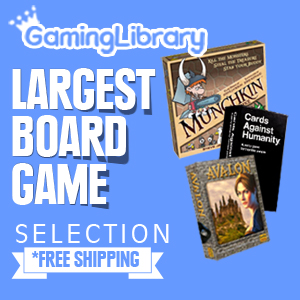 There you have it! Interested in getting this? Here in the Philippines you can find it in your friendly local game stores or alternatively, Gaming Library also has this on stock!

Till next time and keep on gaming!

- Advertisement -
Previous article
Feel the Love This Valentine’s Day with this List of Anime and Video Game OTP Couples!
Next article
Cheers, love! The Cavalry’s Here With Nendoroid Tracer!