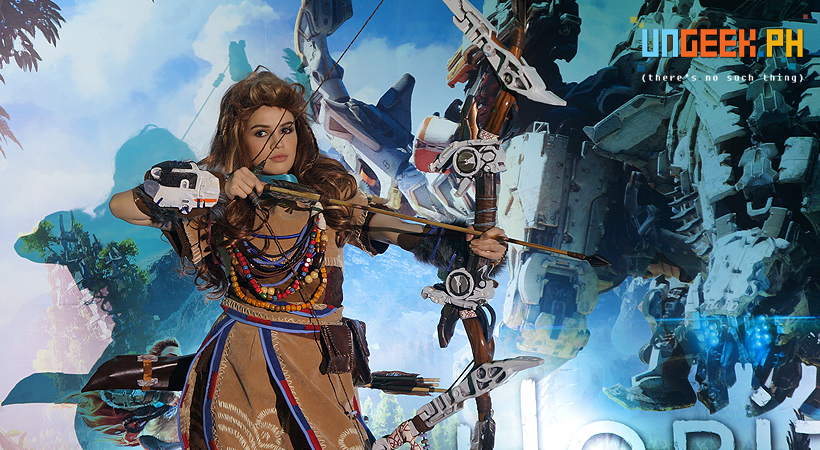 The Ungeek team along with a bunch of local, regional and international media were treated to an early access playthrough of one of the most anticipated games of the year, Horizon Zero Dawn. From the makers of Killzone, Guerilla Games, Horizon immerses you in a post-apocalyptic world where the remaining human populace have reverted back to the hunter-gatherers of old and monstrous machine-animals roam the land. You play as Aloy, the lead character with the ability to change the course of her people by uncovering the mysteries that have led to her family being outcast from their tribe. 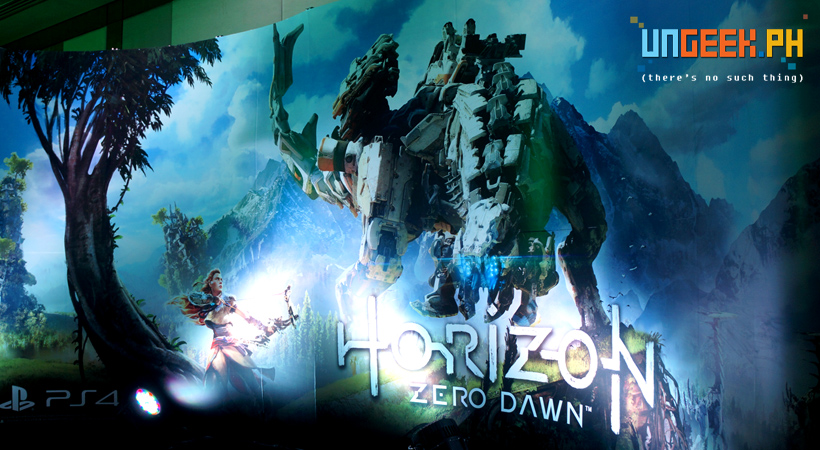 The event took place inside one of the function rooms of the Makati Shangri-La Hotel where Sony PlayStation Asia invited Mr. Roland Ijzersman, lead concept artist for Horizon Zero Dawn, to the event. Mr. Ijzersman discussed the journey that Guerilla Games had to go through to bring us this PS4 exclusive, from conceptualizing the art and characters to developing the game, and it looks to have paid off in spades as Horizon Zero Dawn looks as awesome as it is promising.

The main highlight, of course, is being able to play the first 3 chapters of the game 2 weeks before launch date. Without giving too much away (because we really want you guys to experience this as fully as you can – and trust us, it’s worth it), we can say that the game looks ridiculously gorgeous! Guerilla really outdid themselves in crafting probably one of the most comprehensive environments on an open-world game. The environment, made up of a lot of grassy plains and rock formations, is beautiful, and portrays a world that offers a stark contrast from being post-apocalyptic, similar to the juxtaposition of dinosaurs and robotic technology.

Art-direction plays a major role in bringing the world of Horizon Zero Dawn and its characters to life. Roland Ijzersman mentioned when we had the chance to interview him that they love the mashing of these two worlds together of technology and with nature; how the two clash and interconnect at the same time and how technology becomes a new life-form outside of human control. It’s a weird mix of 2 extremes but Guerilla Games absolutely kills the execution, bringing us the masterpiece that is Horizon Zero Dawn. 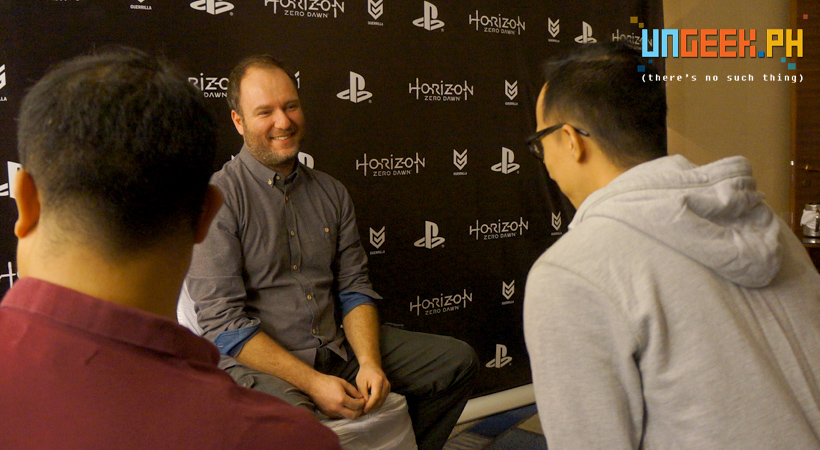 The world design sets the stage for Horizon Zero Dawn where various tribes are designed differently specific to where they live and what their individual cultures are. Take Aloy’s design as an example, she grew up in an area where there are hardly any large animals roaming. You get to hunt small rabbits and rats and whatnots in game and it makes sense that the fur, skin and pelt that she gathers from animals make up majority of her wardrobe. Of course since this is a mashup of tech and nature, her outfit will naturally include bits and pieces of scraps found in the world and during her machine hunts.

Lighting was carefully crafted and plays a huge role in adding tone and hue to an already lush 3D environment. Heck, there are moments in game where you do not want to progress and just stare at the majestic scenery.

Despite the combat (melee) buttons mapped quite oddly (R1 and R2 trigger while the L1 and L2 allows you to switch weapons and aim), it was not a major issue and was one thing you get used to easily while playing through the game. Movement is crisp and animation is pretty fluid, combos switch from melee to long-ranged attacks in an instant and while we were only able to tinker with the game for a few hours, we were treated to a variety of techniques and combat moves that you can dish out. There are also skill points that you can earn as you level up, which you can use to upgrade a lot of your basic abilities depending on your playstyle. You can fully upgrade the combat track and go into every battle guns blazing, or you can upgrade the crafting / harvesting track so that you can easily fill up your stock of materials as you explore the vast wilderness. 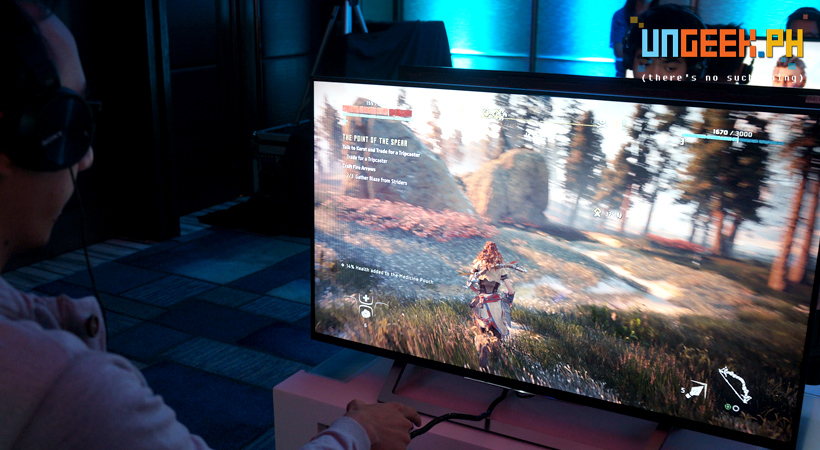 Sometimes, though, it’s not all about the button-mashing. There are times when stealth is a more preferred avenue of attack. Guerilla broke down the basic tenets of pre-historic survival – fight of flight, and this is particularly evident in the design of the various creatures in the world. Some enemies will choose to fight you head on, while others will choose to retreat to higher ground. Sometimes, running away is the best play you can make, choosing to isolate stragglers to make the combat swing in your favor. 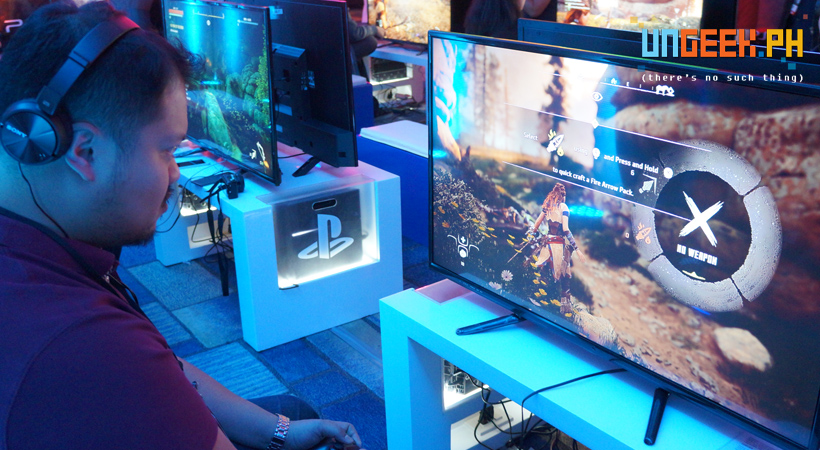 Cinematics and narrative was something to be lauded as well, even though there are times that they were a bit over-extending. The opening sequence moved rather slowly because of heavy cinematics, but that’s quite understandable to establish the main character, Aloy and how she views the world. 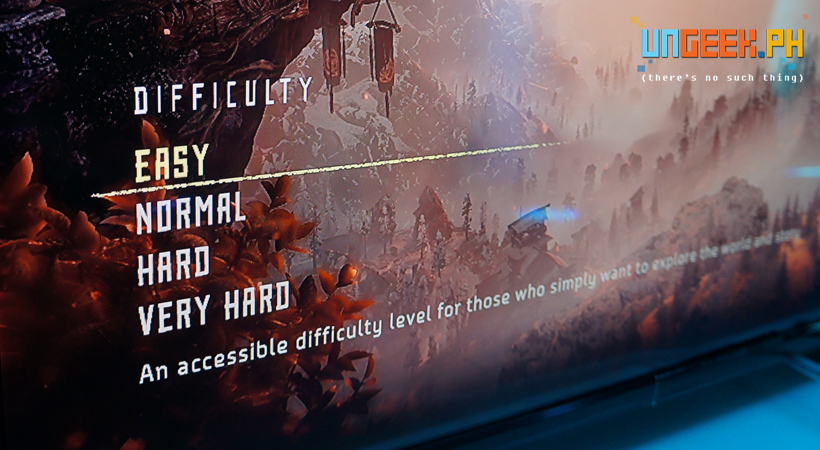 If there’s anything that we found a bit lacking, it’s the difficulty. The game is very lenient and won’t really punish you as much. Hit boxes are pretty big and, at least from our experience, we felt a bit too overpowered. We understand the move to make the game easy to approach – especially since this is a new IP, but we just found the combat a bit non-threatening at times. More experienced gamers might want to jump in on the game with higher difficulty settings.

That being said, we definitely cannot wait for the game to arrive come the 28th of February! We already pre-ordered our copy, so expect an unboxing of the collectors edition soon! Expect to see more updates from us as the days progress but for now, we’re totally hyped and we are super grateful to Sony PlayStation Asia for inviting us to this special sneak peek presentation of what could be an early contender for Game of the Year.

- Advertisement -
Previous articleHere’s What You Should Be Getting Before The Moogle-Chocobo Carnival Event Ends on February 20!
Next articleDota 2 fans rejoice, the Manila Masters is upon us!