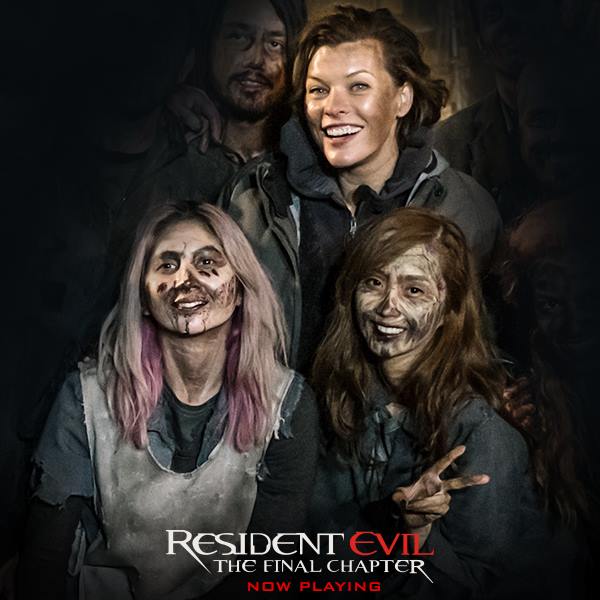 Shoutout and mabuhay to my #ResidentEvilMovie zombies from the Philippines, Alodia Gosiengfiao and Ashley Gosiengfiao! — Milla Jovovich

Milla Jovovich, the iconic star of the Resident Evil movie franchise personally thanked sisters, Alodia and Ashley Gosiengfiao, for their work and participation on the “Resident Evil: The Final Chapter” movie.

Posted in her Facebook Page today (February 4), Milla Jovovich shared a photo of her and Gosiengfiao sister while on set of “Resident Evil : The Final Chapter” in South Africa.

“Shoutout and mabuhay to my#ResidentEvilMovie zombies from the Philippines, Alodia Gosiengfiao and Ashley Gosiengfiao! Thank you for joining the movie shoot in South Africa – we had fun, right? Calling Alice’s PH army, don’t miss the Final Chapter, now in cinemas” — Milla Jovovich

On the photo caption, Milla Jovovich thank both Alodia and Ashely for their role as zombies in the movie.

Showing their gratitude, sisters’ Alodia and Ashley have both reposted the photo with their caption of excitement of the shout out from their idol, Milla Jovovich.

“Omg Milla Jovovich!! Thank you for the shout out!! So happy to be part of your movie Resident Evil Movie!” — Alodia Gosiengfiao

“Got a shoutout from Milla Jovovich herself, an idol of mine since I was a kid. Umm can’t breathe lol,” —Alodia Gosiengfiao