Overwatch May Have Revealed Its Next Hero AND IT’S NOT DOOMFIST!

Blizzard via the PlayOverwatch Twitter Account has just released a bit of lore that seems to hint at the next upcoming hero for Overwatch and, much to the dismay of some fans, no, it’s NOT Doomfist.

[SCIENCE] Meet Efi Oladele—winner of the Adawe Foundation’s genius grant for her achievements in AI and robotics!

Meet EFI OLADELE, an eleven year-old prodigy in the fields of robotics and artificial intelligence and the supposed next hero to grace the Overwatch character ranks. PlayOverwatch’s tweet leads us to a fictional interview article featuring Efi Oladele by Atlas News in a segment called “Spotlight on Numbani”. The article reveals a bit about Efi’s background and her various achievements. The most notable things about the feature is Efi’s expertise on Robotics and AI, her mention of the OR15s (which begs the question of “What ARE OR15s?”), what this secret thing she’s going to do with her grant money, and whether there’s any significance to this trip of hers to what she’s working on. 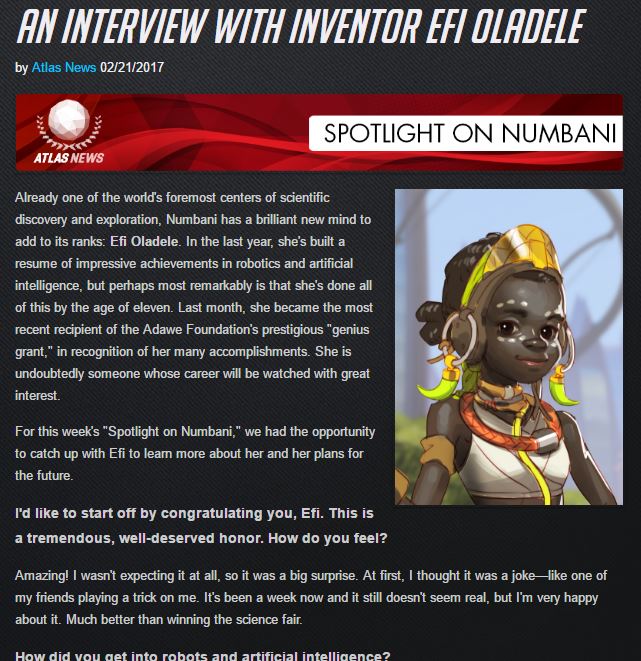 This does leave us with a LOT OF QUESTIONS! Given her background, are we dealing with another mech suit user ala D.Va? Is she really the next hero of Overwatch or is this just a clever tie-in to a bigger story? With regard to Doomfist, is he being moved back for a much later release or is the Doomfist lore tied in with Efi’s story (like will she utilize Doomfist’s glove technology in some way)? ARE WE ABOUT TO SEE A CHILD WITH TERRY CREW’S VOICE?! (okay, that one’s a stretch LOL)

What are YOUR theories? Do tell us in the comments below! We itching to know more! Rest assured, we’ll definitely be keeping tabs on this story and report more happenings as they come! Till next time, keep on gaming!

- Advertisement -
Previous articleYou Won’t Be Seeing This NieR: Automata Commercial On Your Local TV Anytime Soon
Next articleReady to get your hearts (and wallets) broken again? Manila Masters ticket prices have been revealed!