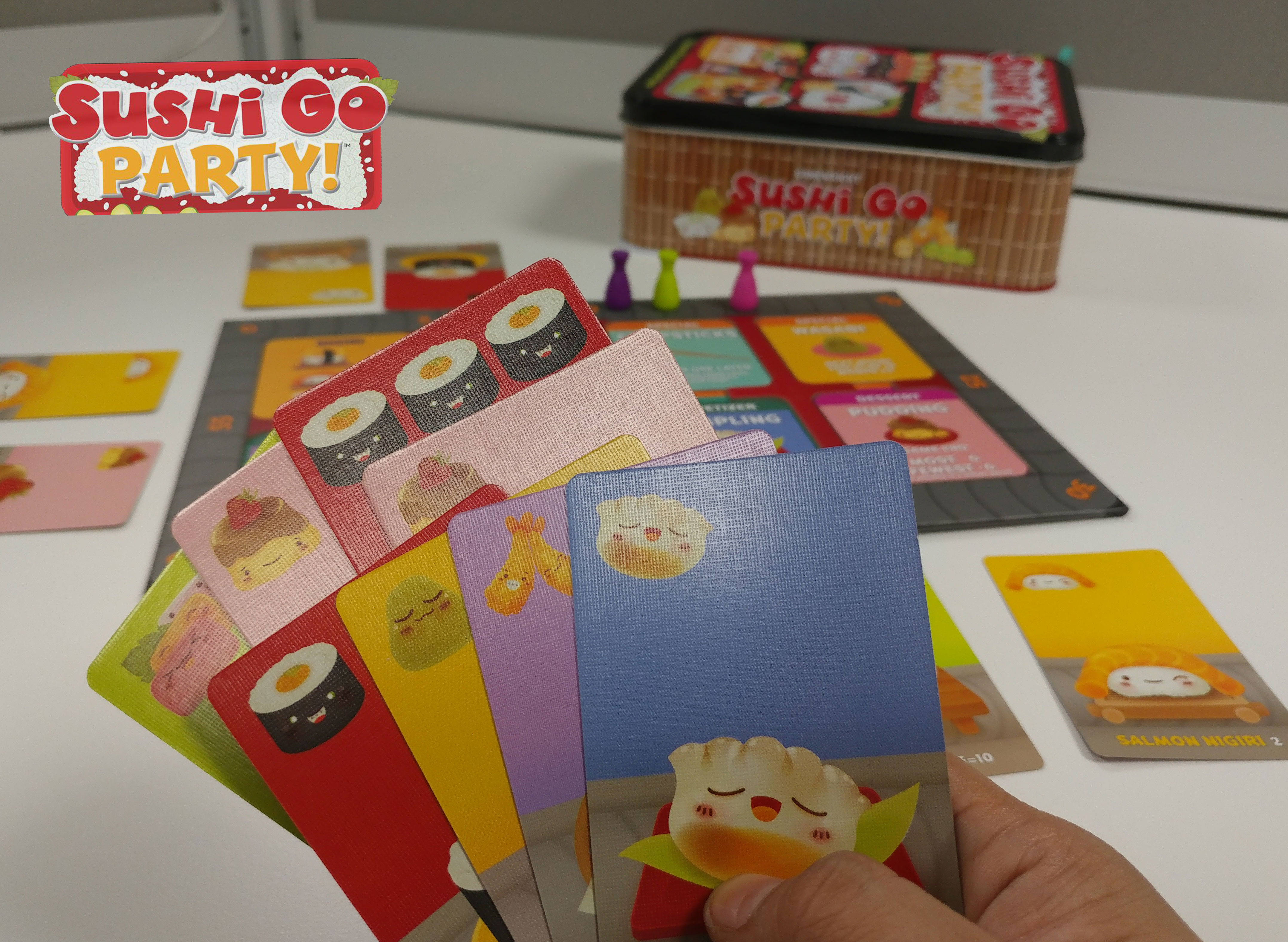 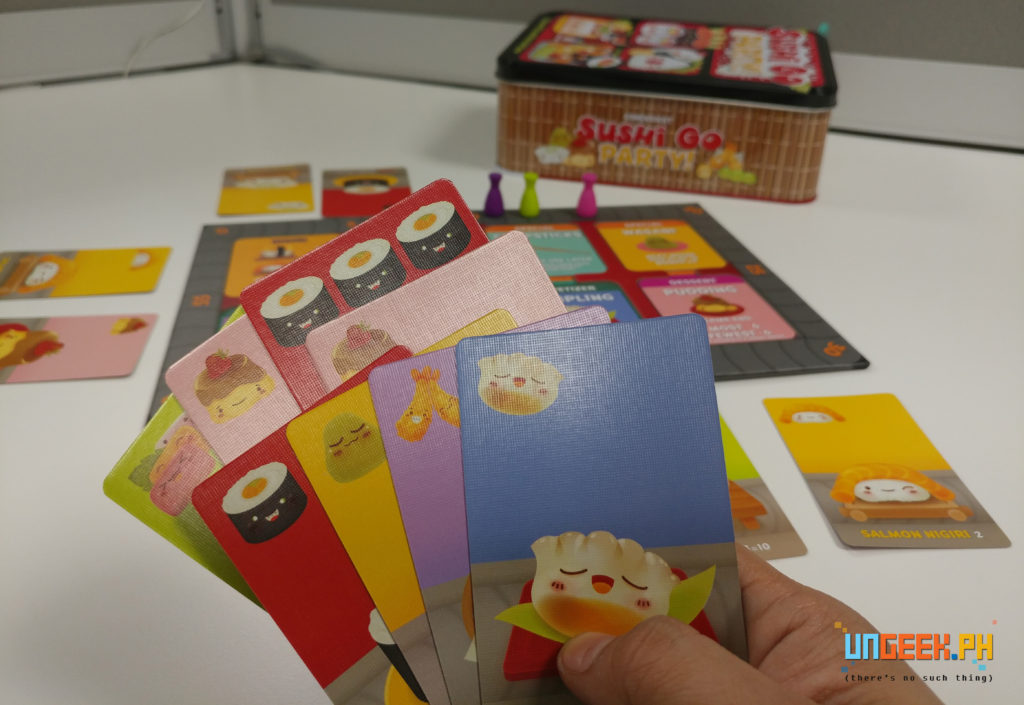 Sushi Go is a fast card-drafting or the “pick-and-pass” game which allows you to score points by collecting the most sushi or maki rolls or the delectable desserts.

With its new version the Sushi Go Party!, you can choice from a party platter of mega maki, super sashimi, more desserts, which allows you get more points and win!

The game is easy learn and play.

Similar to the original game, the primary game mechanic is pick-and-pass, where you need to pick a card from your hand, and then pass the rest of your hand to the next player. Choose the card which will give you the most points based on the current game setup.

With Sushi Go Party!, you can customize each game by choosing a la carte from a menu of more than 20 delectable Japanese dishes. Thus, making each game interesting and challenging. Simply select which Rolls, Dessert and set of Appetizers and Specials for your game menu.

Gamewright, the publisher of this amazing and best selling card game, has also provided several game menu configuration to help you as well. Set up the game with the  ‘My First Meal’ menu to get ease in the mechanic of Sushi Go. 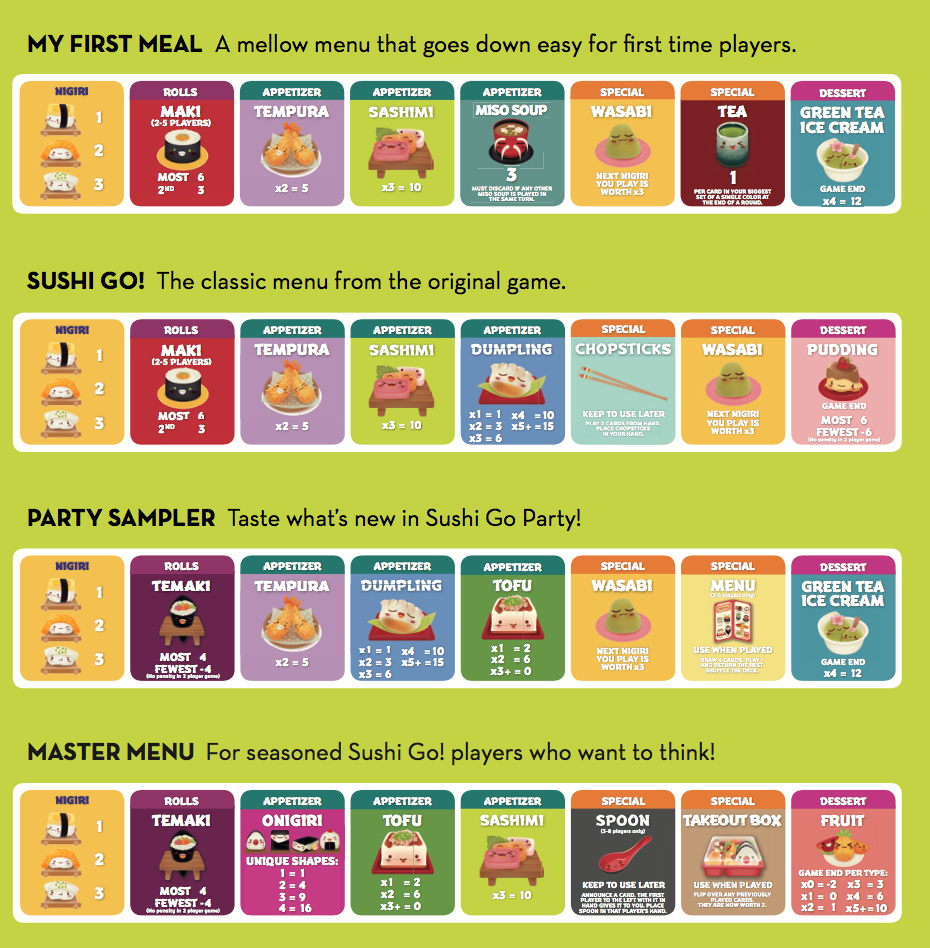 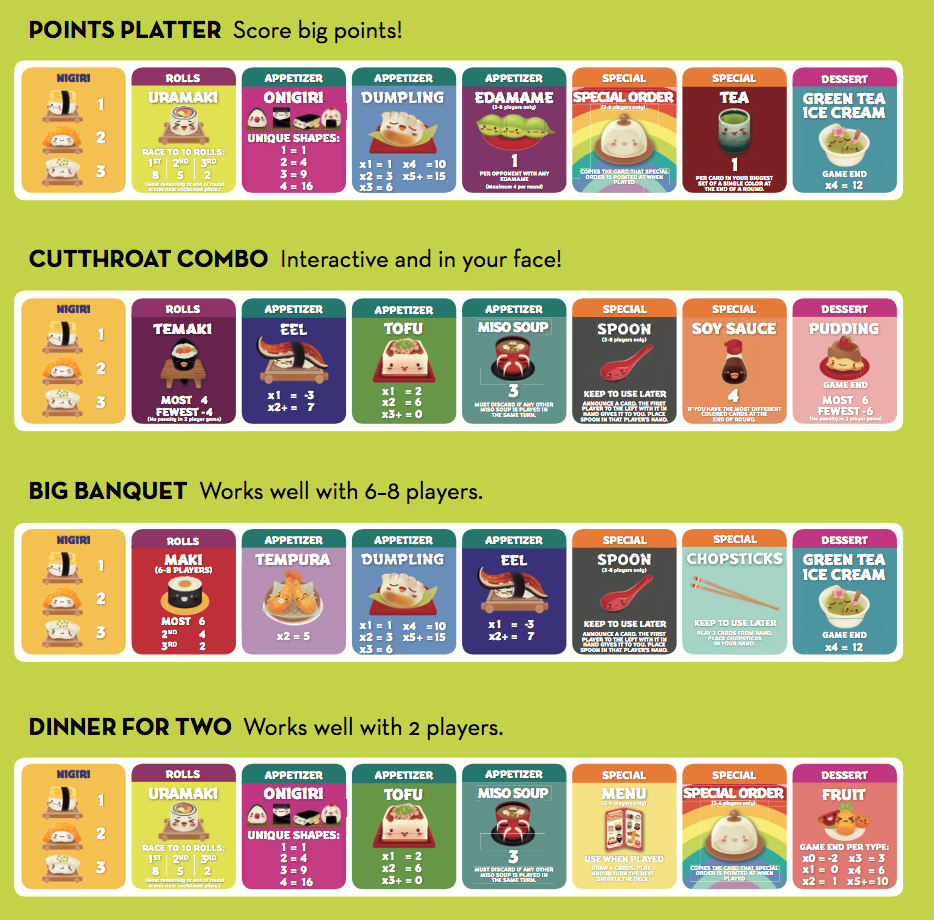 To get a feel of the new additions of Sushi Go Party!, we suggest to use the ‘Party Sampler‘ menu, or be competitive with the ‘Cutthroat Combo’ menu . There’s also a recommend ‘Dinner for Two‘ menu selection, and the classic Sushi Go config.

But feel free to mix and match the game menu to your hearts desire.

Keeping track of the players score is now easy with the use score-tracker board and 8 colorful saki-bottle inspired player makers, which players can choose from.

Setup is easy, and it takes less than 5 minutes!

A Sushi Go Party! game consist of 3 rounds, but only one (1) menu is set for the entire game. For the more game setup details and full rules, download Sushi Go Party! Gamewright page.

In addition, similar to the original game, scoring happens at the end of each round. The dessert cards  ONLY score at the end 3 rounds. To make scoring easier, it is best to group together cards alike. Check the menu (and the rule book) and count the score and move the player token per player.
Sushi Go Party! comes is in a beautiful designed tin-can, and has card inserts or  compartment which allows sorting easier per card. Card inserts has enough space if you wish to all your protect your 181 Sushi Go Party! cards with 57.5 x 89 mm card sleeves (e.g. Mayday Chimera).

The Sushi Go Party! allows 2 to 8 players to join, and is family-friendly which can be played by ages 8 and up!  Sushi Go Party! is a fast-paced and easy to learn card game, which takes around 30-minutes to play and is ideal for casual gamers, even for first time gamers.

- Advertisement -
Previous article
That Hilarious Deadpool 2 teaser we’ve been seeing? Catch it in Cinemas while Watching Logan!
Next article
Heads Up, Naruto Fans! The First Ever Boruto TV series is Closer than You Think!