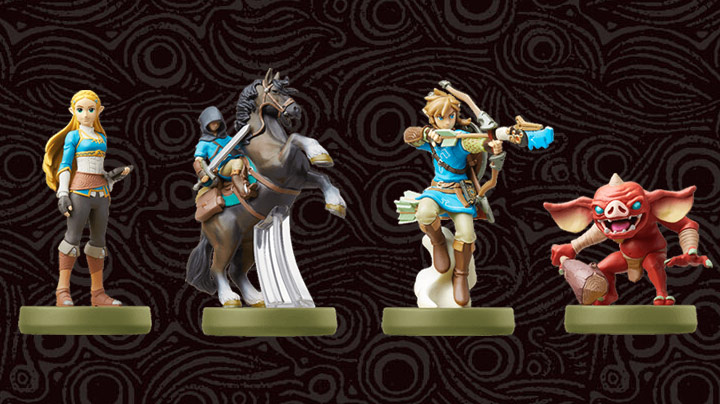 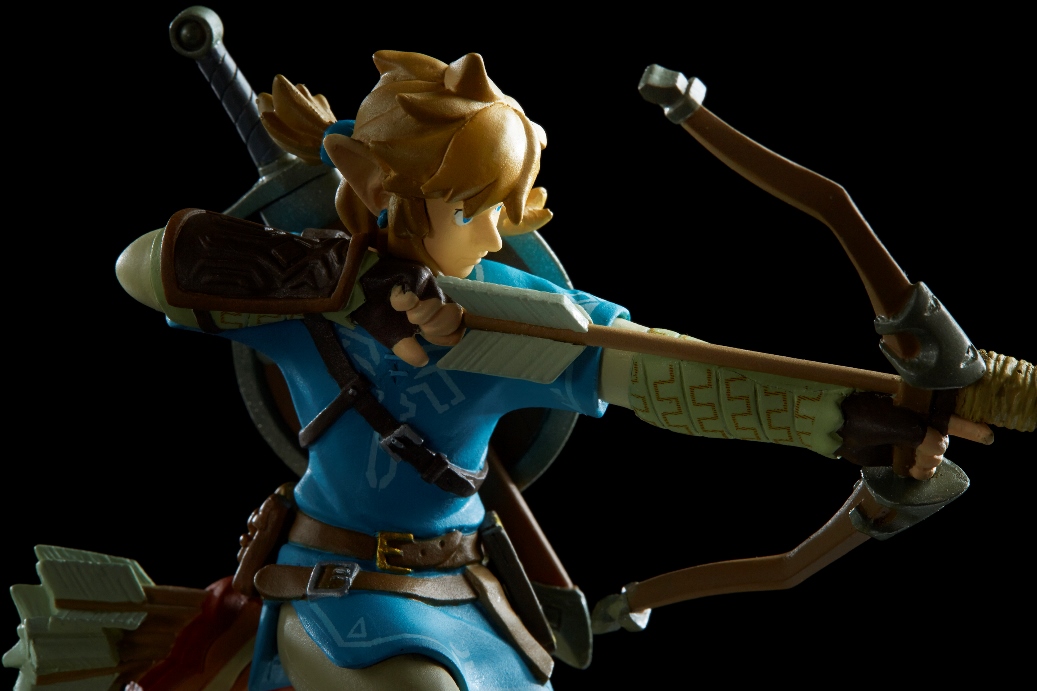 Time to dust off that smash bros. amiibo that’s been sitting on your shelf, as some of them might have rare items for The Legend of Zelda: Breath of the Wild hiding underneath that figure.

As a general rule, you don’t have to get all of them… Because most of the items can be acquired in-game. But there are some amiibo-exclusive stuff bound to a certain figure. So if you want that Sword of the Six Sages or Hylian Shield, this guide helps you choose what figure to get.

A good tip before you tap – Save first! If you don’t like what you get just reload your file. Otherwise it’s a 24-hour wait to use them all again.

To start things off, here’s the list of items for the Breath of the Wild figures: 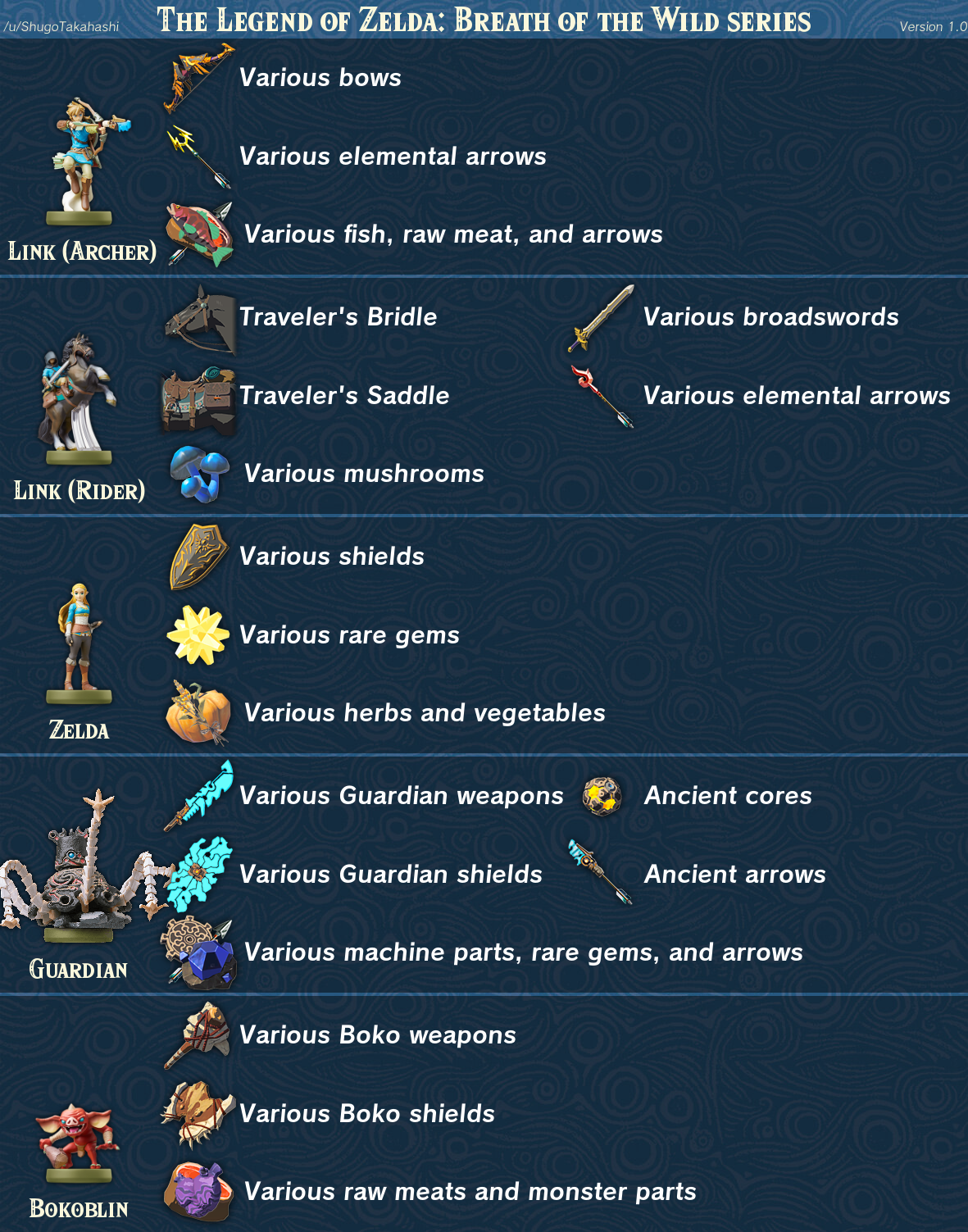 Now looking at the list, you can actually skip this line entirely! Since every item in this set can be acquired by playing the game. But for those who want an *ahem “early advantage,” like say THE HYLIAN SHIELD from the Zelda amiibo, this is what you can get.

Continuing on, lets look at the Smash Bros amiibo line: 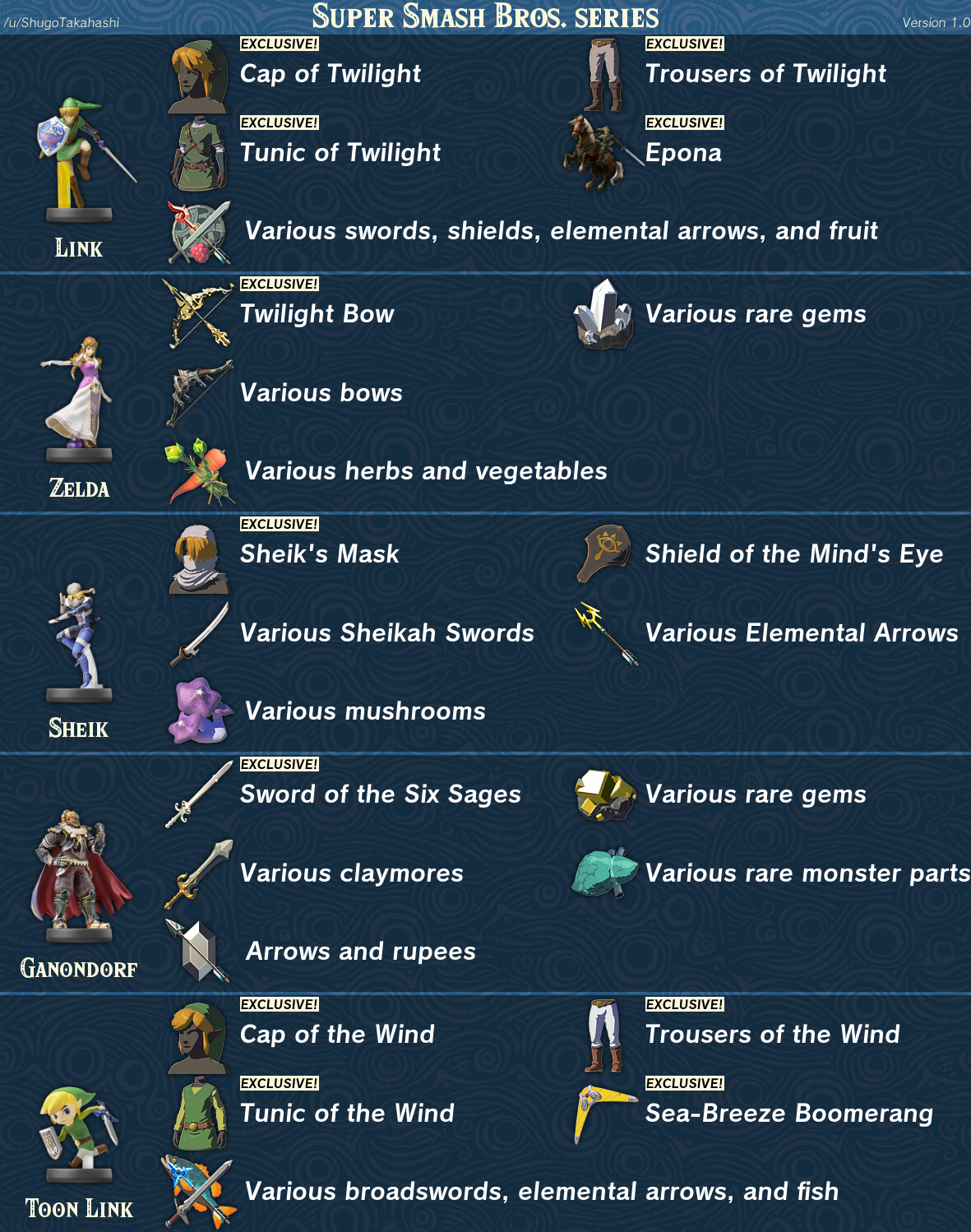 If you fancy yourself a bit on the old-school, you might want to get Link and Toon Link for the iconic clothing. But if you are on a budget the best out of the bunch would probably be the Link amiibo… For what? For Epona of course! But that Sword of the Six Sages from Ganondorf ain’t half bad right?

Next up, the 30th Anniversary Series: 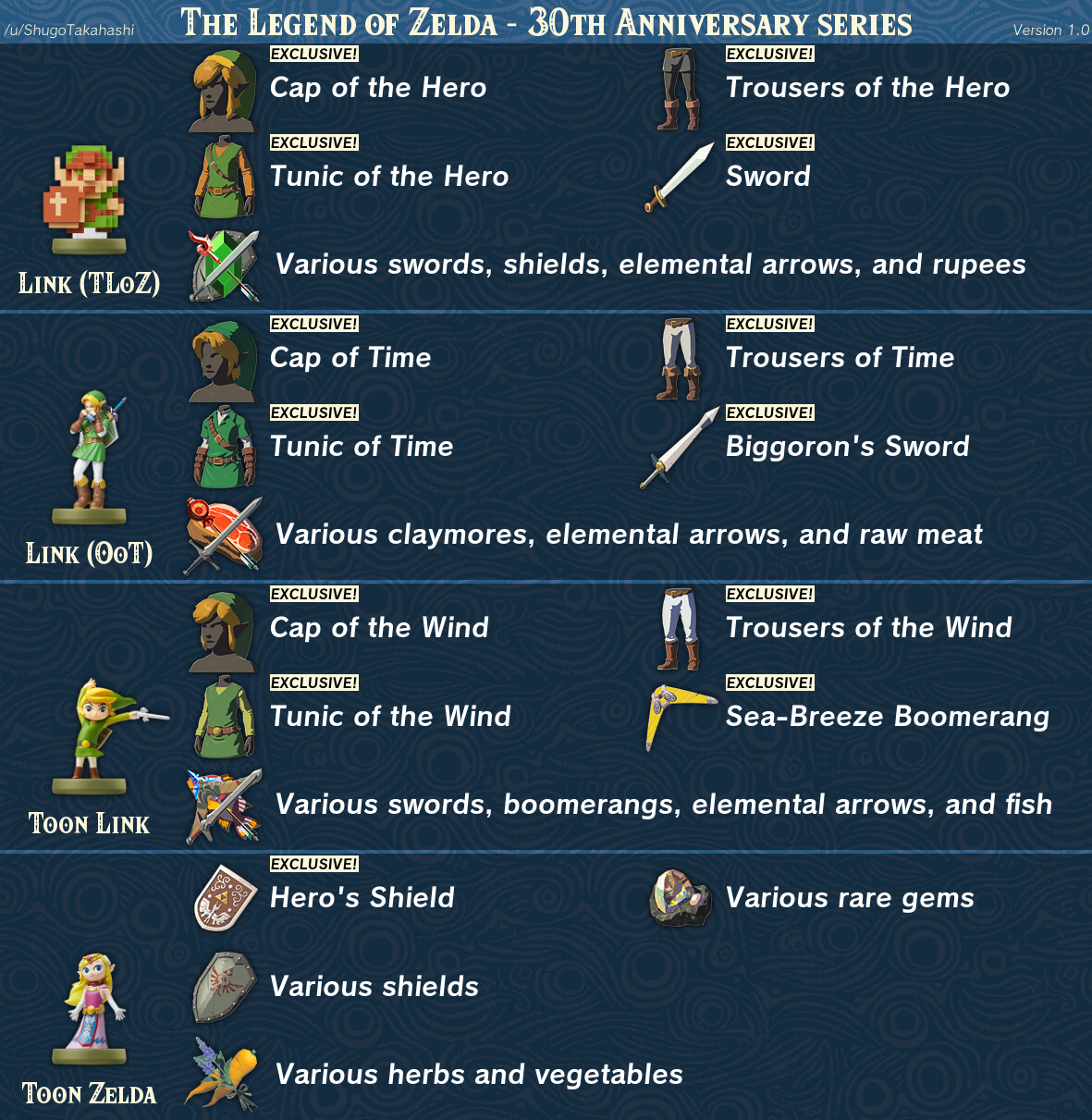 This set has the most exclusive items compared to the other figures, but that’s because the Toon Link is 100% identical to its smash counterpart in terms of drops. But if you can only get one here, get the Ocarina of Time Link for Biggoron’s Sword.

This figure from Twilight Princess HD lets you summon a Wolf Companion to aid you in your journey, with its overall HP tied to your progress from that game.

Every other non-Zelda franchise amiibo:

Any amiibo that aren’t from a Legend of Zelda series character (yes, even the Animal Crossing ones) will still give something in Breath of the Wild – but instead of giving you specific items, each amiibo will drop a random selection of materials including food, random loot, and sometimes even gemstone.

But wait there’s more! Looks like data miners have gathered some stuff to look forward to in the future: 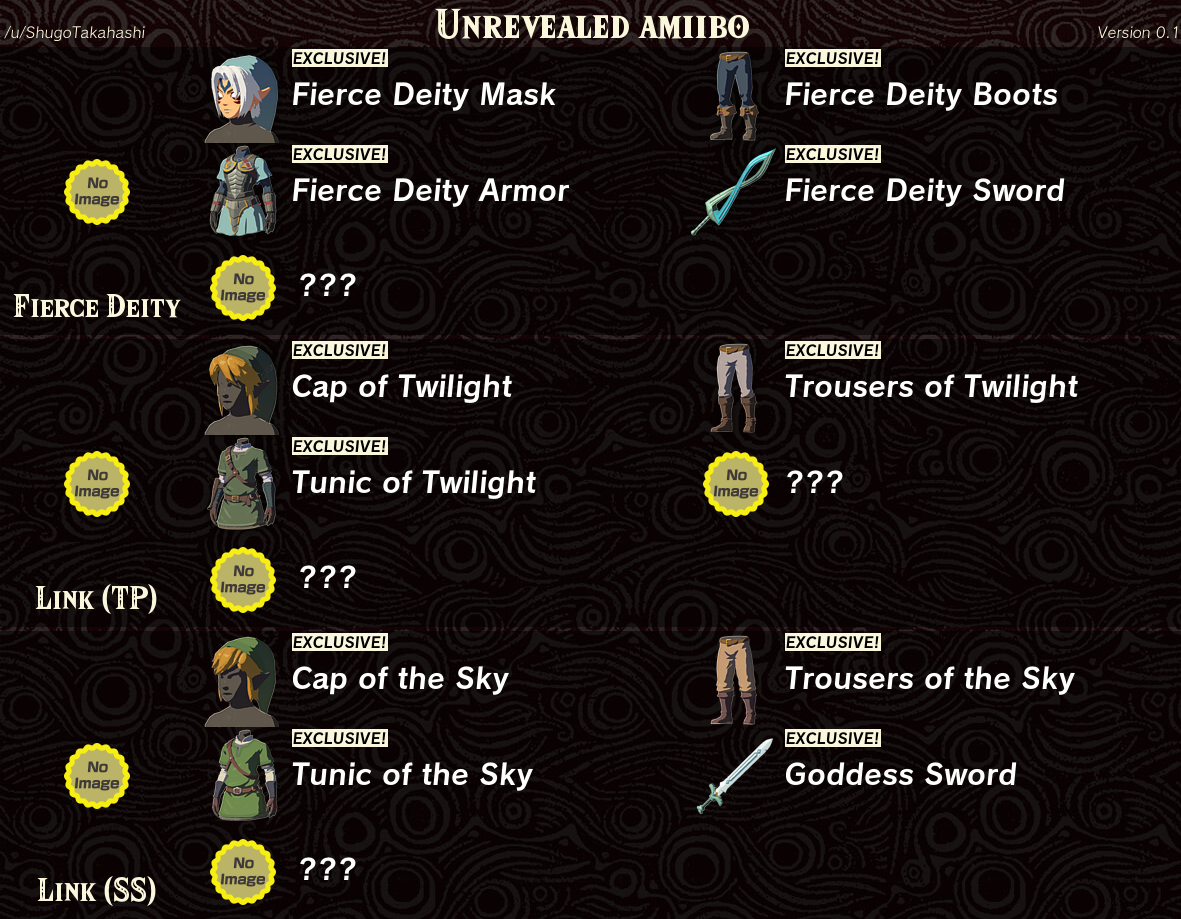 I’m especially looking forward for the Fierce Diety and Skyward Sword figure. But that Twilight Princess Link looks to have the most unknown stuff here which makes me curious…

There you have it! Special thanks to ShugoTakahasi over at imgur for compiling this!