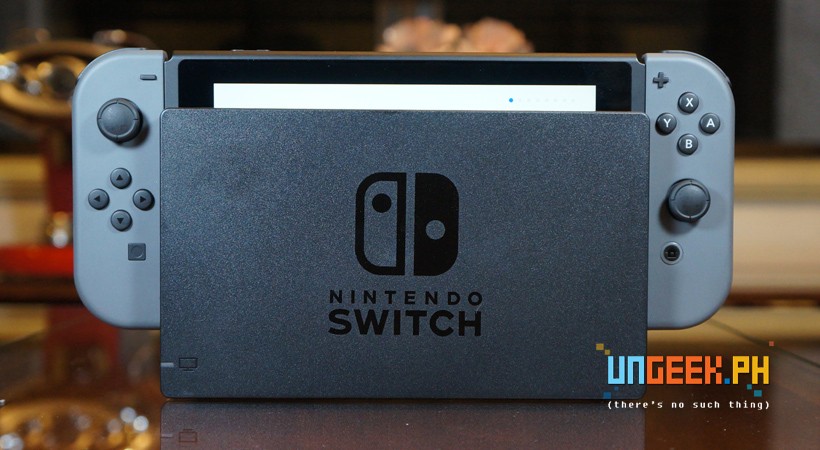 March 3rd was a big day for Nintendo. It launched a new console and, while hype is pretty much high, there’s always been a level of veiled skepticism on whether or Nintendo has what it takes to make gamers fall in love with a brand new system.

I will have to admit that the last Nintendo console I owned was a Nintendo 64. This was a time when cartridge-based games were on the decline and the rise of games on discs was on the rise. The 64 also showed Nintendo’s direction of creating family-oriented party games rather than triple-A “serious” games the likes that the Sony PlayStation and Sega Dreamcast were spewing.

And while other consoles were thriving (read: PlayStation), Nintendo’s home console limped forward since then (they are doing well on handheld devices, though). So when the news of the Switch was announced, and the features laid out, I was both excited and a bit wary of the new console.

After tinkering with the new device for a bit, however, my cautious skepticism were put to rest. 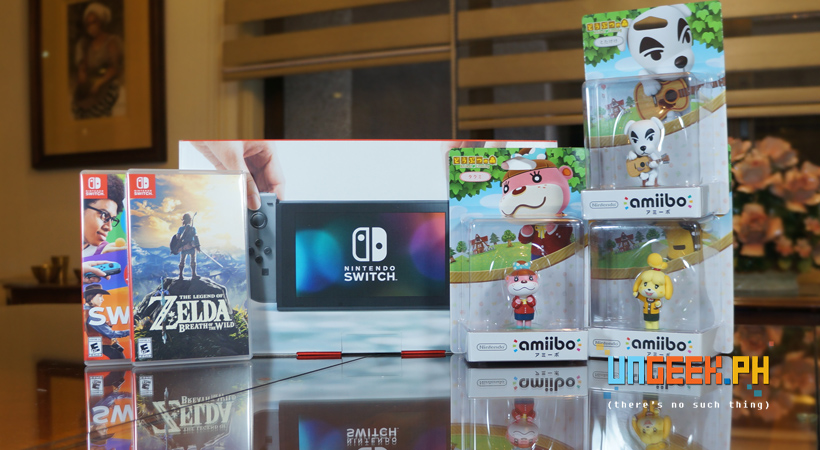 Fellow GG Network Content Creator, JP Esteban (of Ryvaeus from youtube.com/ryvaeus and twitch.tv/ryvaeus ) graciously had Migoy of Too Much Gaming and I take a crack at unboxing his Nintendo Switch that he pre-ordered through Datablitz.

The first thing that we immediately noticed is how tiny the whole console is. The box is a fraction of the PlayStation 4 Slim! 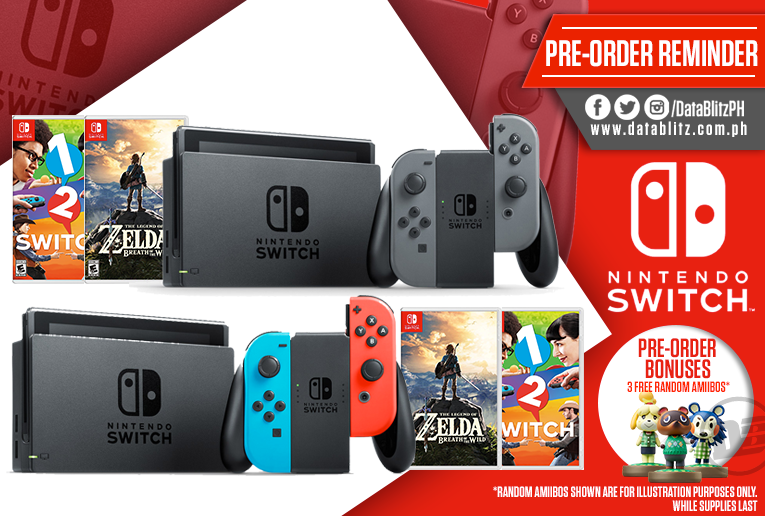 The package that’s being sold here at Php 25,495 (Php 24, 495 if you opt to pay in cash) includes the Nintendo Switch and 2 games for the system namely 1-2-Switch and the game that pretty much singlehandedly sold the Switch on day 1, the Legend of Zelda: Breath of the Wild. Datablitz has been handing out a handful of Amiibo’s as well. 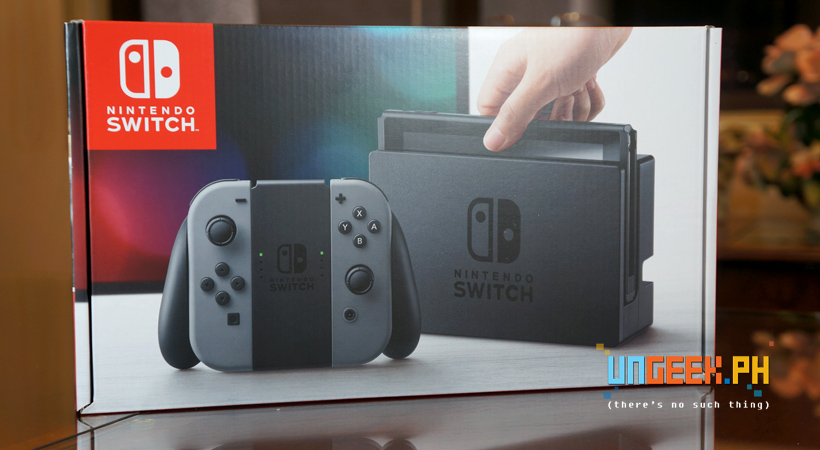 Someone should give an award to the guy in charge of creating the packaging for the Switch. The dude has some mad box management skills. Every inch of the already small box has been utilized. 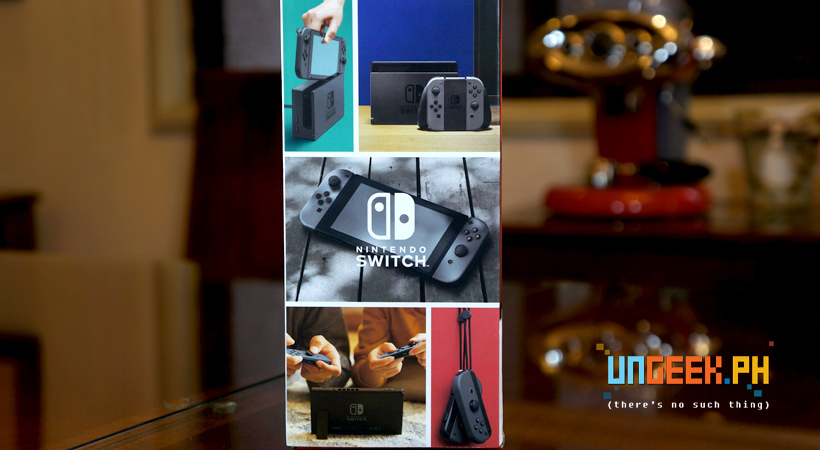 Here’s what they look like out of the box.

The joycon controllers were pretty cute. They’re tiny but when docked, it felt pretty right.

It’s also good to note that the “switch” sound happens when you plug the Joy con onto the Switch console itself. 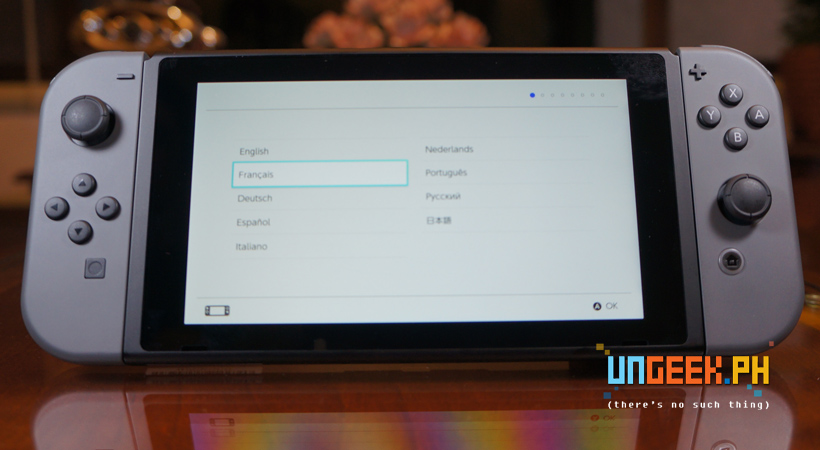 What we love about the Switch, so far, is how ridiculously seamless the switch between game modes is. There’s hardly any lag time and surprisingly removes any form of handshaking – you know, the notification that you’re having your devices interact with each other. 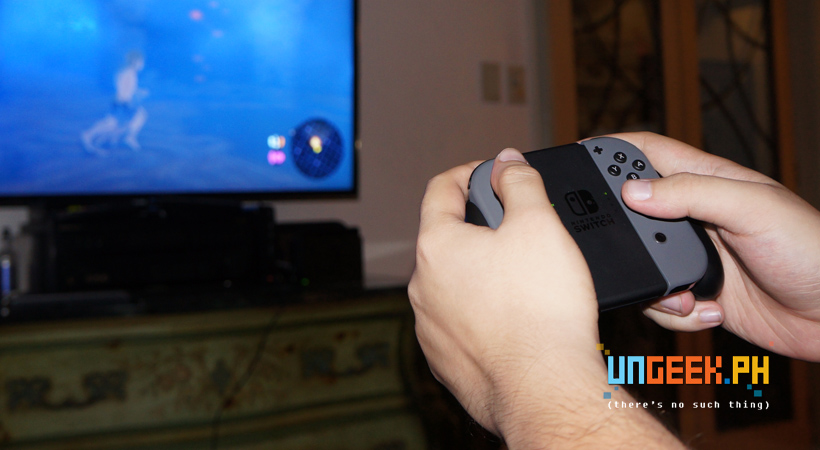 When you put the Switch on the game dock it automatically props your game on a bigger screen and if and when you do need to remove the Switch out of the dock, it instantaneously lets you continue where you left off. Best for when you’re in the heat of battle and you really, really have to go do number 2 (or your significant other boots you out of the TV for Netflix time). :p 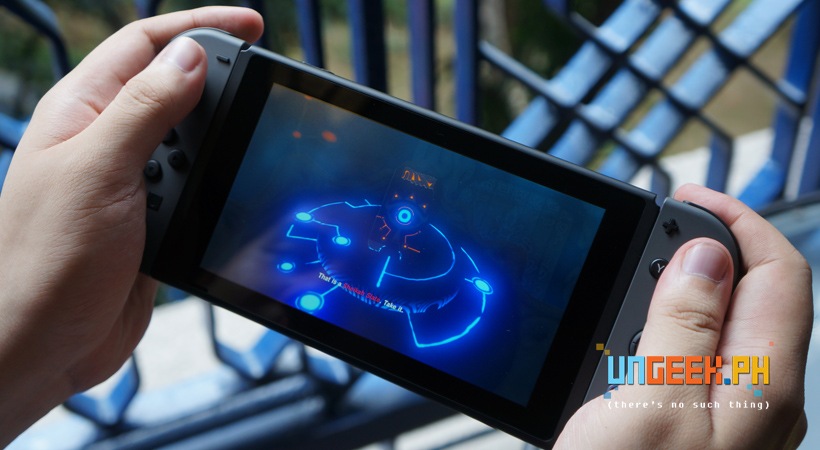 It’s not all daisies and roses for the Switch, however, as we found a couple of framerate inconsistencies when you play the new console either on the gaming dock or like a handheld. When the game is on the Switch itself (i.e. playing it like a handheld console) framerates are consistent and everything is amazingly smooth. However, once you prop it on the game dock that’s when things get a little tricky. 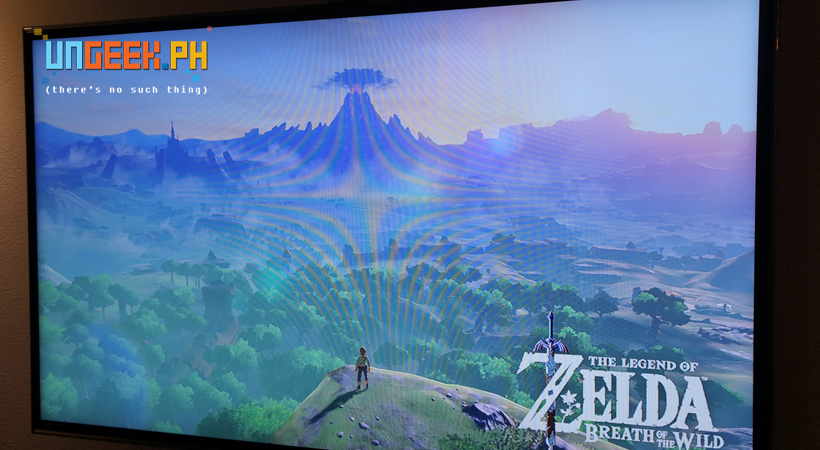 We only tested the Switch out with Zelda and what we saw is the game framerate drops significantly (lower 20’s probably) during battle sequences. It’s not a consistent drop but you’ll feel it from time to time. The game resumes it’s 30 up (even 60 on cutscenes) once you’re on free roam. It’s not a huge deal breaker, but it is quite jarring. We’re hoping that a future patch can resolve this at the very least.

Besides that, Nintendo seems to have a winner with the Switch! One of the most impressive systems I’ve seen, Nintendo fused everything good about their past consoles into one nifty (and handy) baby. It’s not a crazy beast especially when it comes to pushing video game graphics but as far as pushing gameplay innovations is concerned, the Switch may have stumbled upon something that will propel Nintendo to greatness once again.

For someone who had great trepidation to (ahem) Switch, consider me all warmed up and inching towards my (yet again) terrified credit card.

- Advertisement -
Previous articleBlood and Guts Galore | Berserk and the Band of the Hawk Review
Next articleIconic ‘Ghost In The Shell’ Theme is Remixed by Steve Aoki!