The powerhouse desktop for the plug and play gamer – Check out our review of the Asus G20 Desktop! 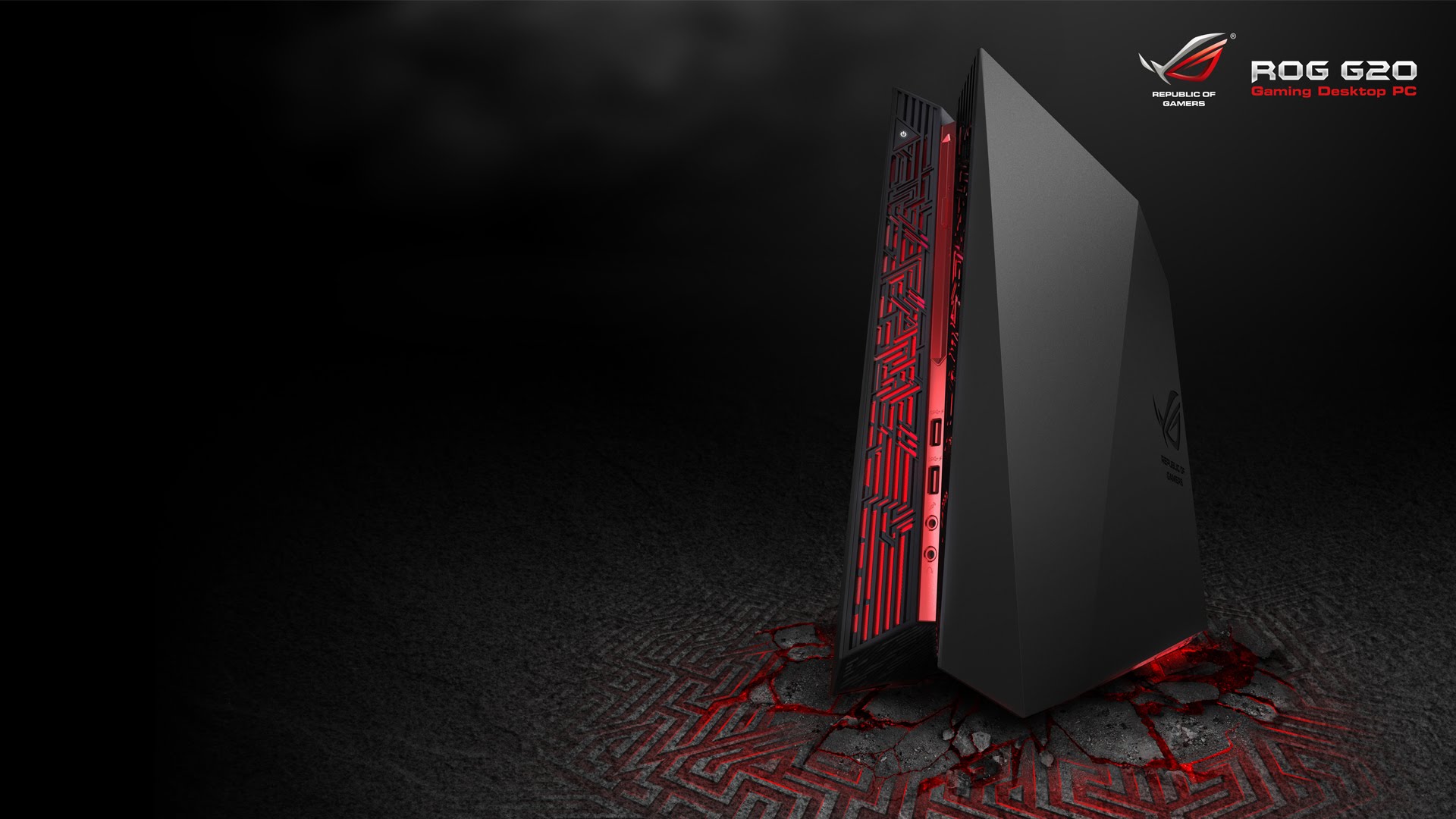 Once in a while, a product comes in that just blows you away not just because it looks good, but it performs well too. There are a lot of jokes to be made of that line, but it rings loud and true for this desktop that’s just oozing with sleek and savvy. Hardcore PC enthusiasts may dislike the idea of a pre-built desktop not only because customizing one from the ground up is cheaper and offers more options for parts, but as with a lot of things these days, there is a price for convenience and people are willing to pay for that premium to hit the ground running. If you’re the type and if these specs are our basis, then this desktop is going to last (and love) you long time! Introducing the G20CB from Asus ROG, the desktop that is a looker as much as it is a workhorse! 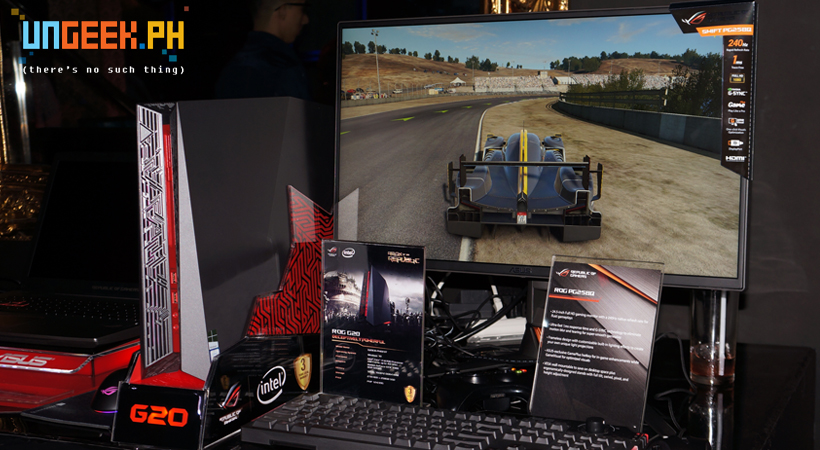 First off, let’s take a quick look at the features and specs of this desktop:

There’s a lot technical jargon in there but the thing you’d want to remember about it is that it is fast and definitely furious. With the SSD installed, you are assured of lightning fast load times of around 5-7 seconds give or take once the power button is pressed. The latest 6th gen processor and the 16GB memory allows you to run multiple programs and tabs without your PC skipping a beat. Lastly, the GTX 1070 in there lets you play the latest games at their highest settings with no signs of slowdown. It won’t only perform well, but it’ll look good doing it due to the chassis lighting effects. Sounds good? Alright let’s unbox this bad boy!

Exterior look and feel – so sleek, much wowe 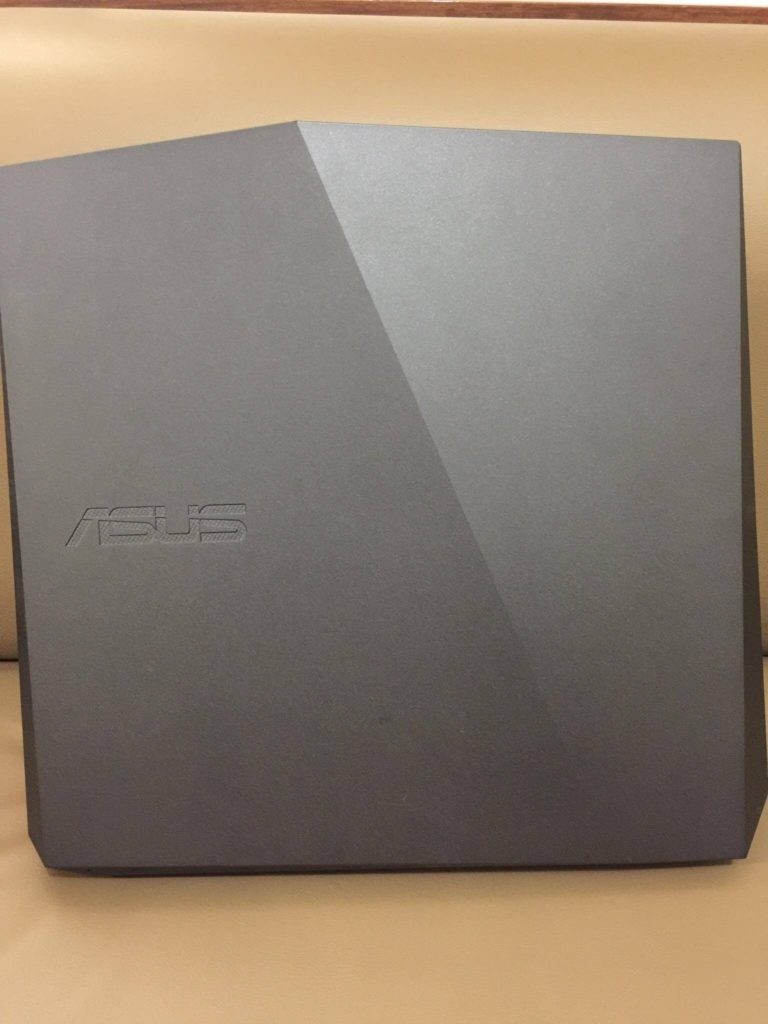 The box that this unit comes in is MASSIVE, I was surprised that the package came in a box that big given that it was pre-built and the components didn’t have any boxes of their own. Upon opening it, you see that the unit itself is slightly similar to a desktop tower, just shinier, thinner, but equally as heavy. One side of the desktop proudly shows the Asus logo etched into the metal, and the other side shows the ROG logo. This is actually a very nice touch to the desktop, with the branding being there but since it has no colors or loud marking, it seamlessly blends into the panels, making it look simple and sleek. A very good design decision and for me, this was a big plus as I like my things looking clean and streamlined. 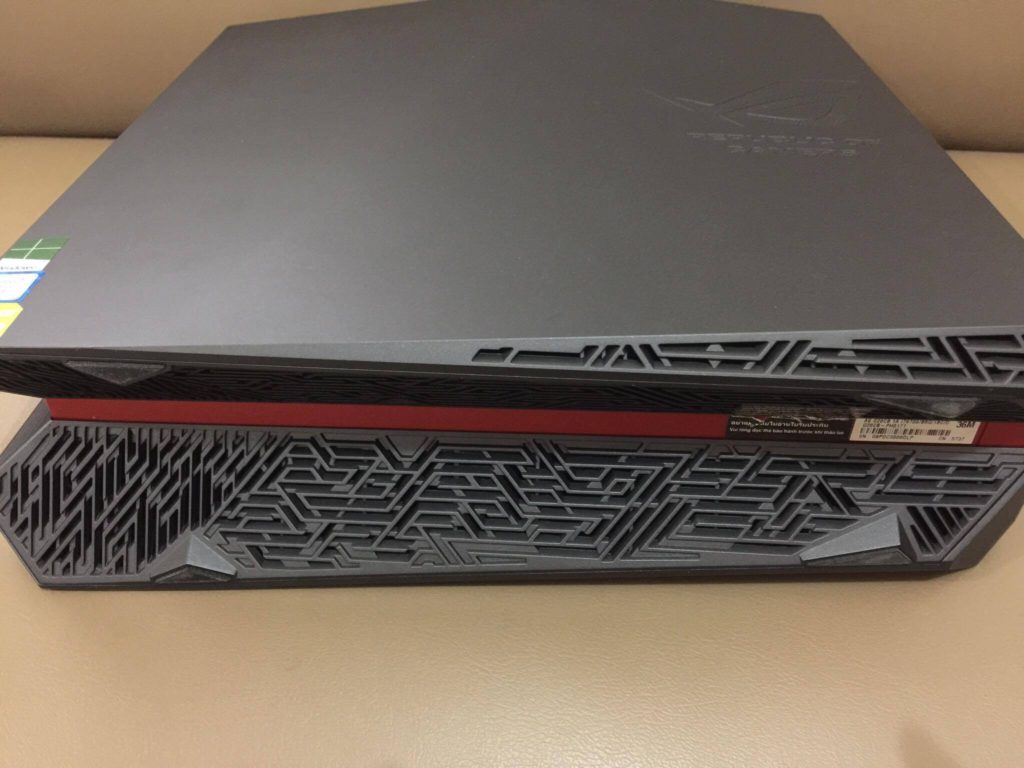 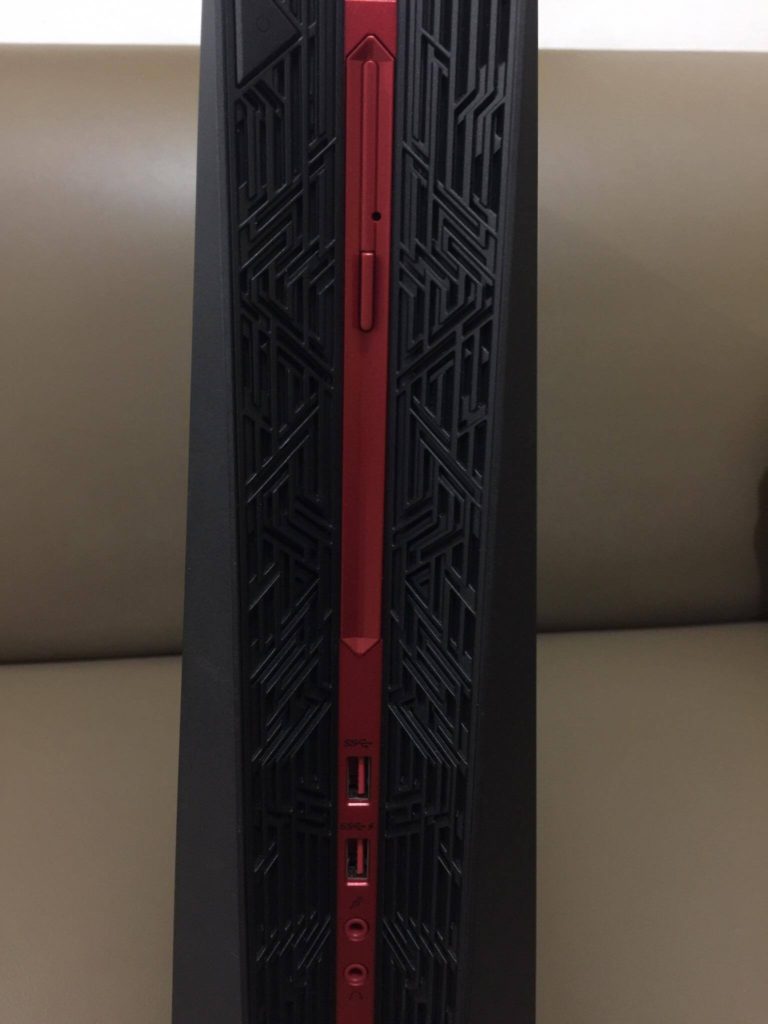 The front face of the desktop hosts the usual fare – 2 USB 3.0 ports, a microphone port, and another for your earphones / headsets. Oh, a DVD writer too! You cannot get any more basic than that to be honest, but hey, why not put that in there just because? The rear ports are a different story and boy does this thing look great from behind! That sounded really dirty, but hey, this sexy thing is worthy of that catcall. You get a plethora of USB slots (2 3.1’s, 2 3.0’s, and 2 2.0’s), a slot for your internet cable, multiple inputs for your speaker setup, HMDI slots, and a couple for the power input.

You’ve effectively got 8 USB ports. EIGHT! You can hook up your USB speaker set into the slower USB port and leave one to charge your device, use 2 more for the stock mouse and keyboard that the unit comes with or your very own gaming keyboard and mouse, 2 more for… hey maybe you’ve got 2 spare external hard drives lying around that you transfer multiple files around, and even after all that, you’ve still got 2 more free slots! I’m not quite sure if at any point you’ll be able to use all 8 slots but you sure are welcome to try.

One more thing about it? It might not look like it, but this desktop is very well ventilated. Asus laptops are known their well designed cooling system and their desktop counterparts are no different. This should be a very big consideration for people wanting to splurge a large amount of money for something they expect to last them for a long time. 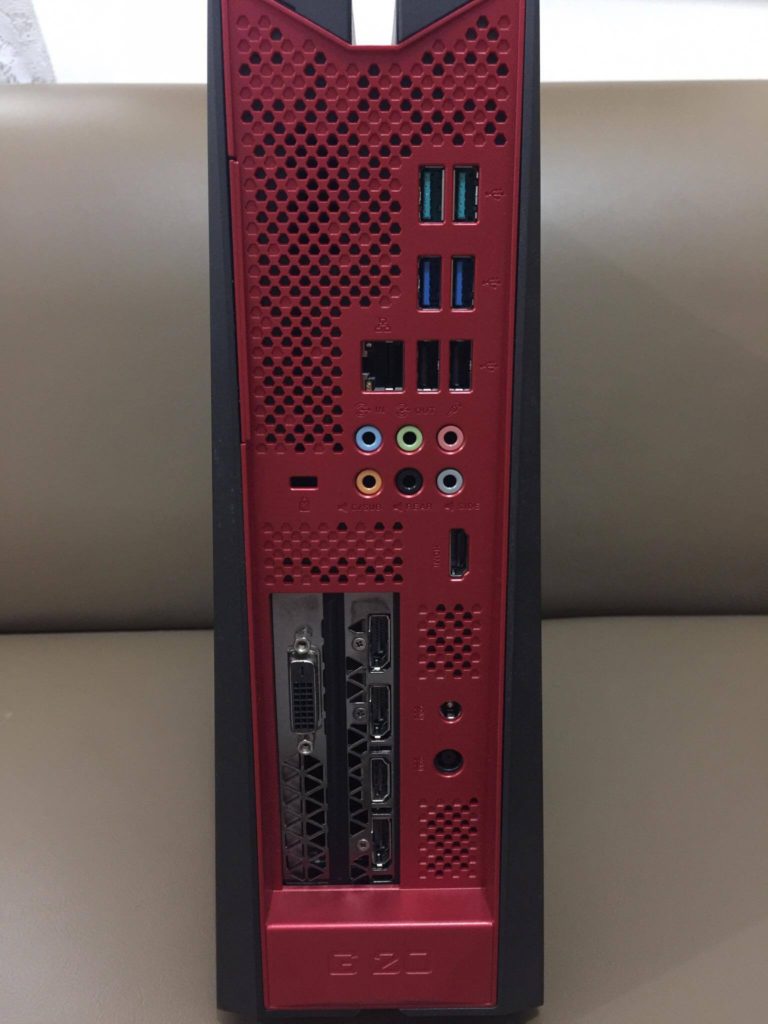 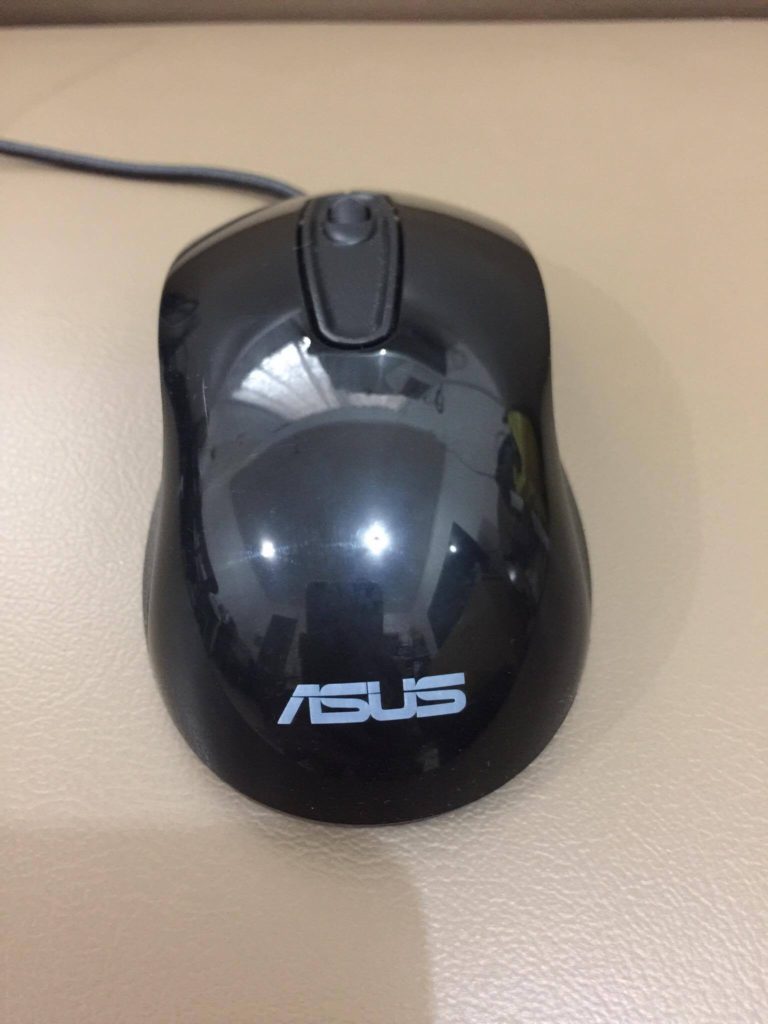 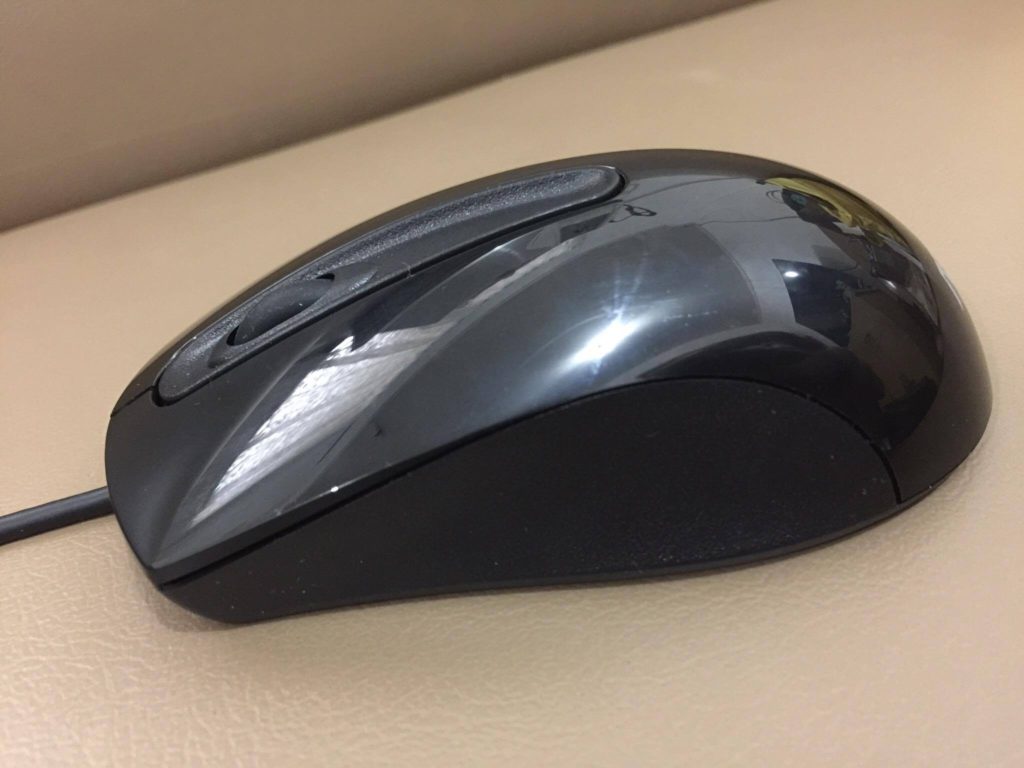 The good thing about this desktop set is that you can literally plug it in and use it immediately upon unboxing. You don’t even need to purchase a separate mouse and keyboard because the G20 comes along with a fairly decent combo that will suit your needs rather well.

The mouse it comes with is pretty standard fare, a well rounded optical mouse that is well shaped and functions as your usual dependable mouse. Honestly, I particularly like the feel of the mouse on my hand. It wasn’t too small to have an awkward hold and even with the scratches on the surface, I have a bias for mice that have “plasticky” surfaces, meaning it isn’t made or covered in non slip rubber. The reason behind my hate for rubbery mice is that the weather here in the Philippines isn’t really the coldest out there, in fact it gets really hot during the summertime and the combination of the weather, the humidity, sweaty palms, and dirt will just wreck your mouse surface, leaving it dirty and sticky due to parts of the rubber melting off. This mouse on the other hand, apart from being very basic with no special features to speak of, will save you the worry of parts melting off due to the heat and moisture. One thing I dislike about the mouse is that the USB cable could have been braided, ensuring a longer lasting peripheral. It’s a very minor complaint, but I’ve had one too many mice die due to defective wiring. 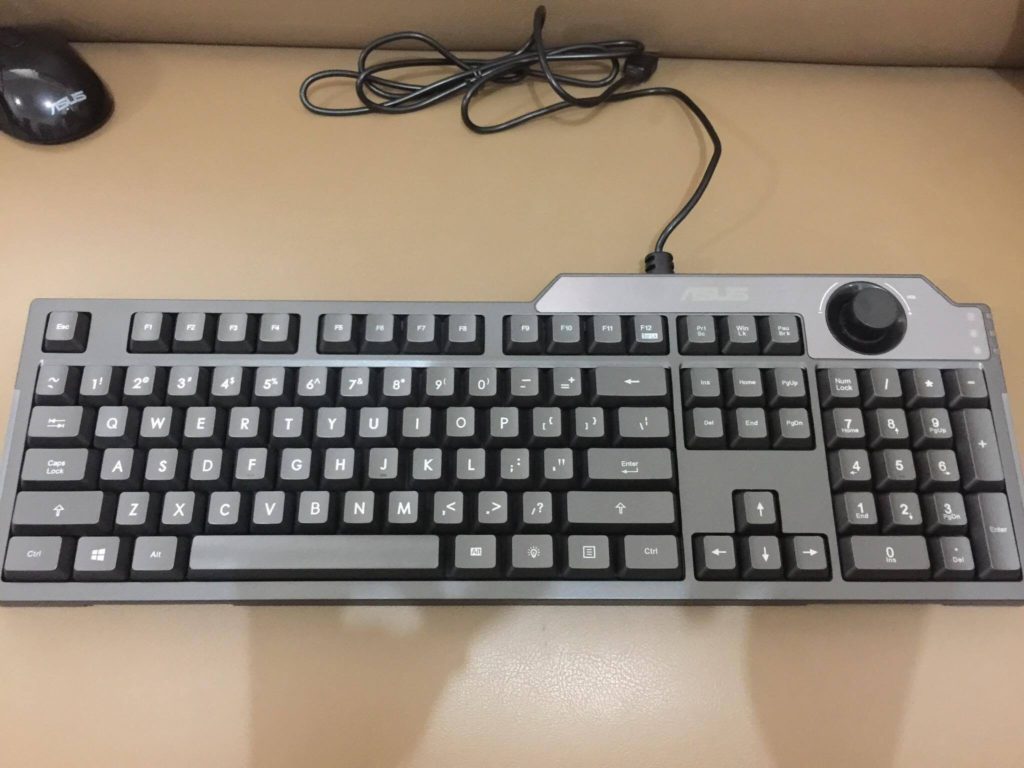 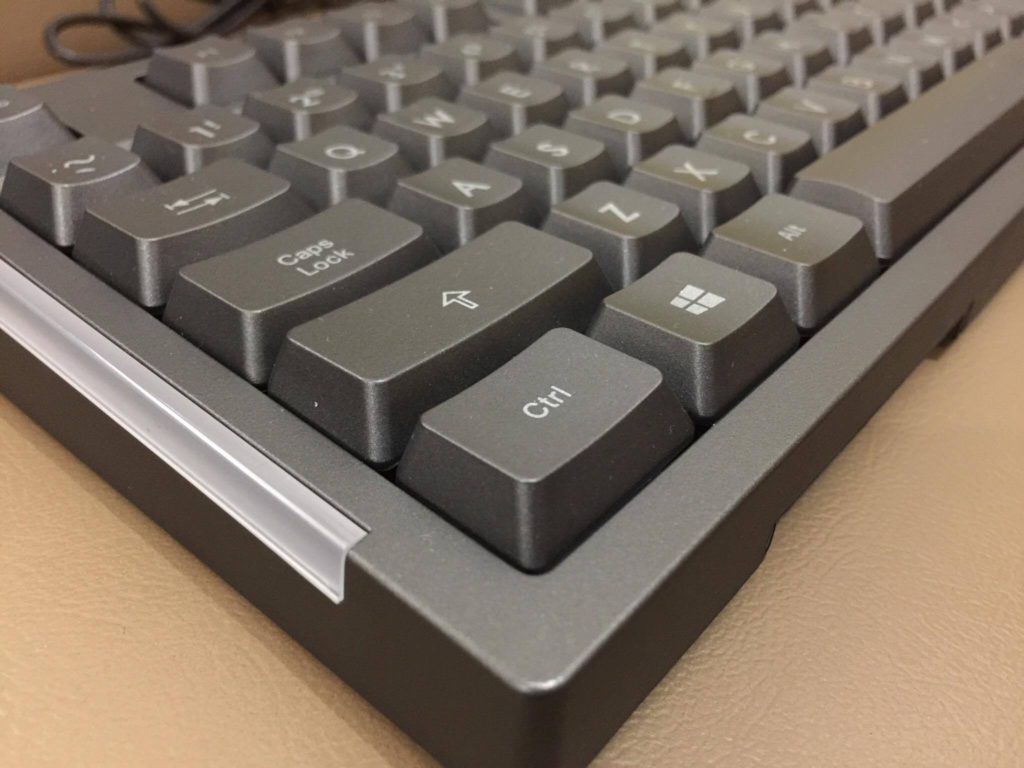 While the mouse is a very basic one, the keyboard is a bit of a step up from your regular keyboard. It doesn’t “feel” like a generic standard keyboard, and while the build doesn’t scream premium, it’s not too shabby at all. I honestly LOVE the feel of the keys, they aren’t really mechanical and there’s no clicky sound, but this keyboard is more of the silent type and the key presses are as satisfying as a full blown mechanical keyboard. I personally use a mechanical keyboard but switching to this, I found that I missed typing and gaming on a regular keyboard! Typing felt equally satisfying as I had typed 2 articles on it and it was like I wanted more. Also, minor complaint being that the cable isn’t braided, it’s something I would have expected from Asus given that their products are always built to last. There’s also a volume dial on the upper right portion of the keyboard which gives you easy access to turning the volume up or down when needed. It’s not the best added feature? But hey, for a basic generic keyboard that’s part of the package, it does the job.

One thing you might notice is that there is a huge black box that this desktop comes along with and it is what you think it is. The G20, being the powerhouse that it is, needs to be powered by 2 separate power bricks (one for the main hardware, another for the GPU) combined into 1 by a nice looking container and I do commend Asus for that design decision as it keeps thing organized and tidy. 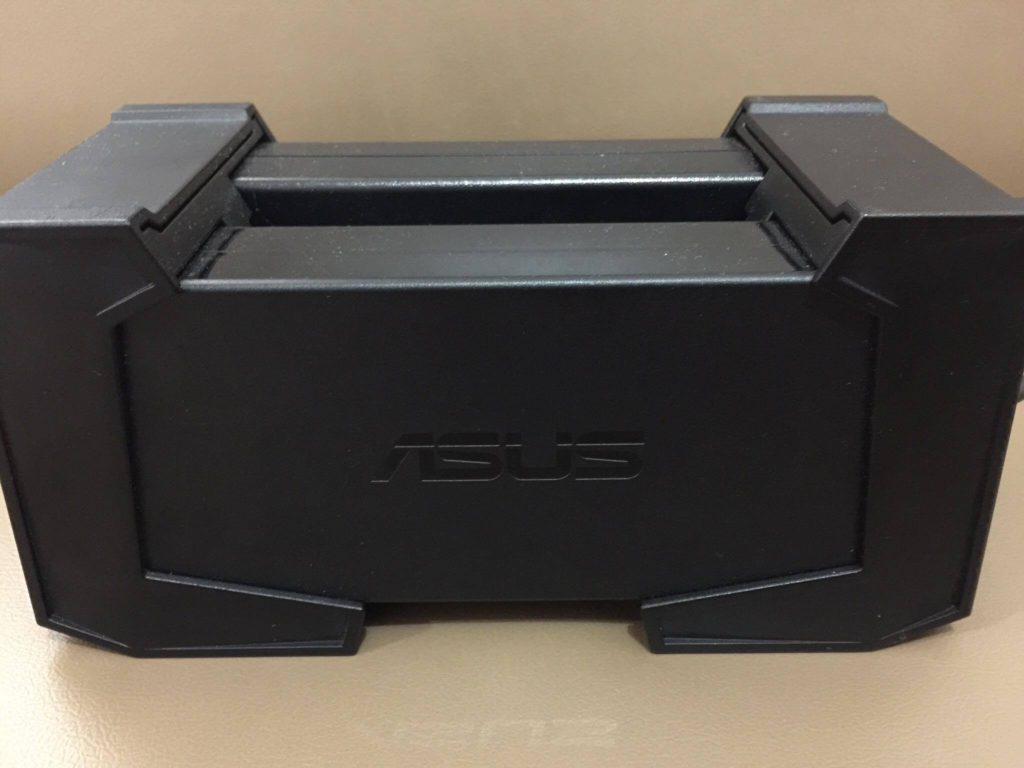 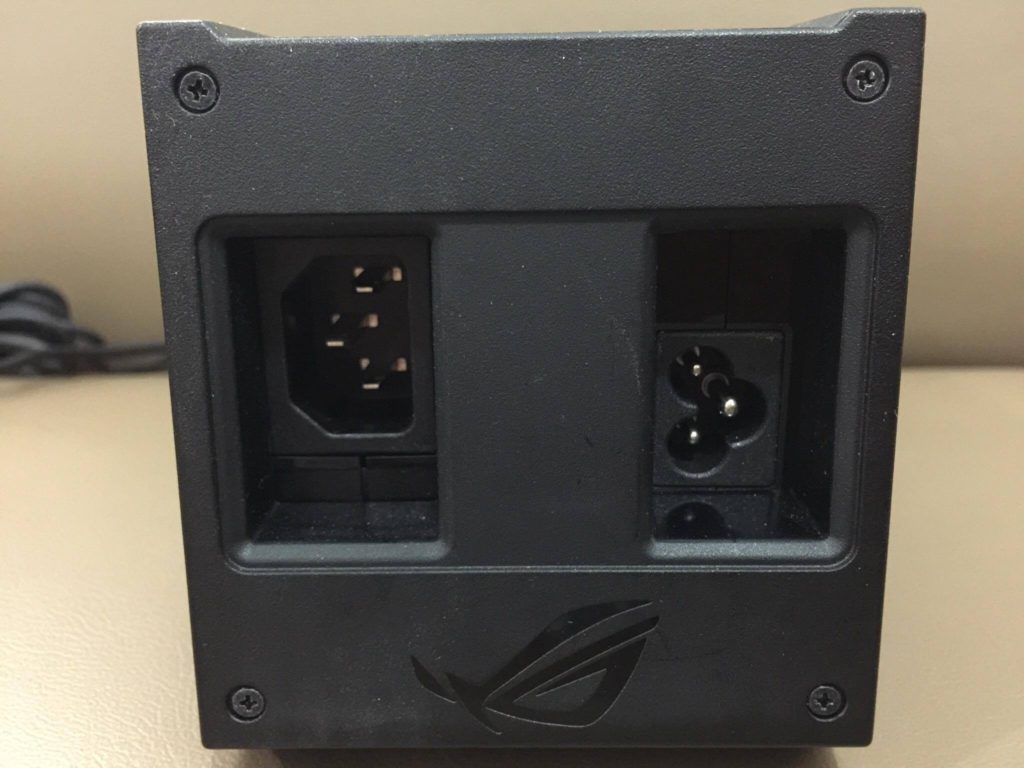 Now we all know that this beast is going to be primarily used for gaming so we skipped doing browser tests, image or video software tests, and much more and we just jumped straight into gaming due also to the fact that you know that if your rig does well in gaming tests, you can be rest assured that it’ll be fine with most anything else.

We tested and played quite a number of games on the rig and these games ranged from pretty light specs to some that demanded a pretty hefty system to run so let’s check the results out: 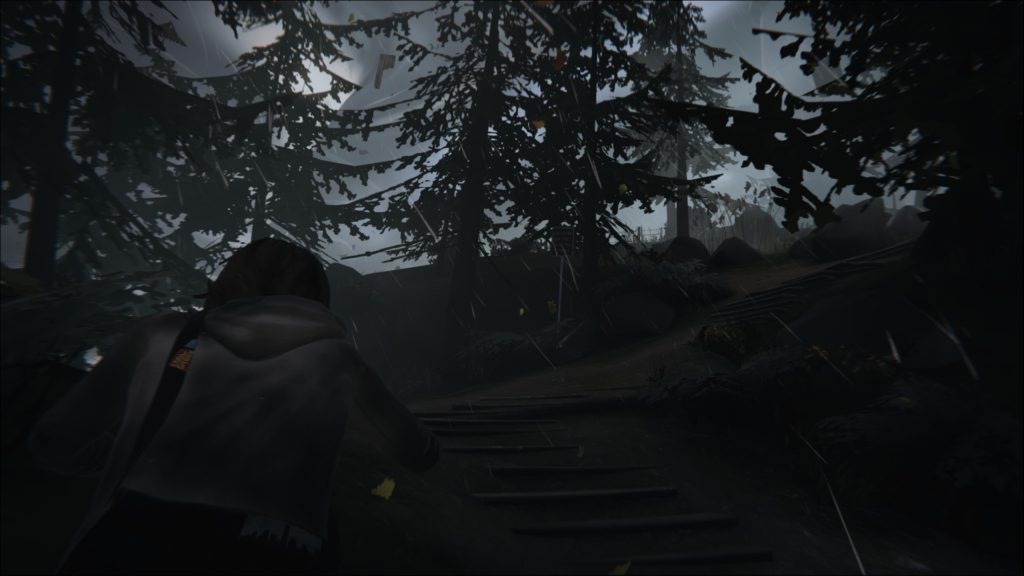 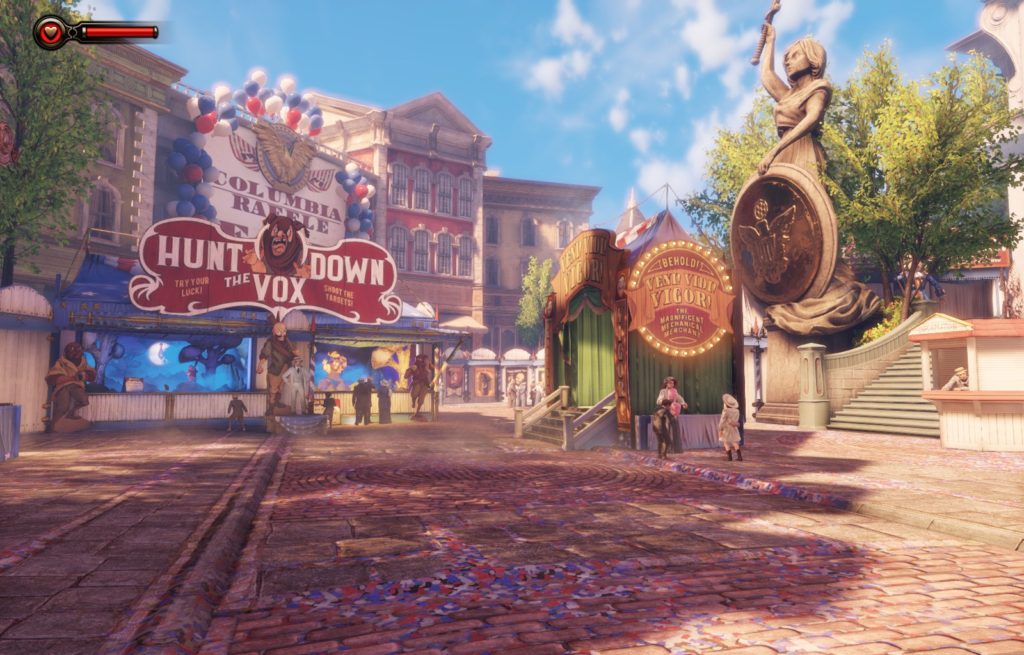 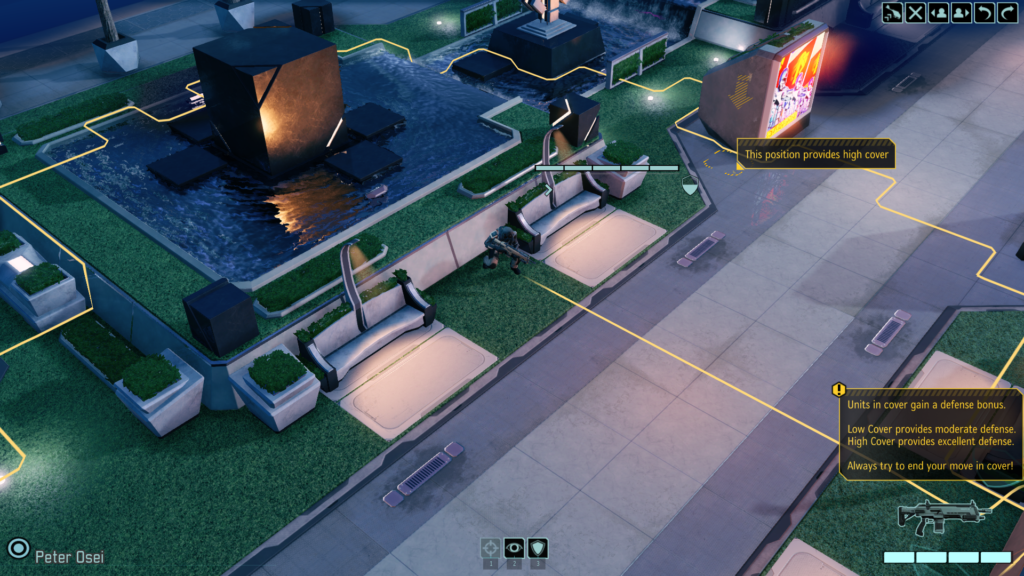 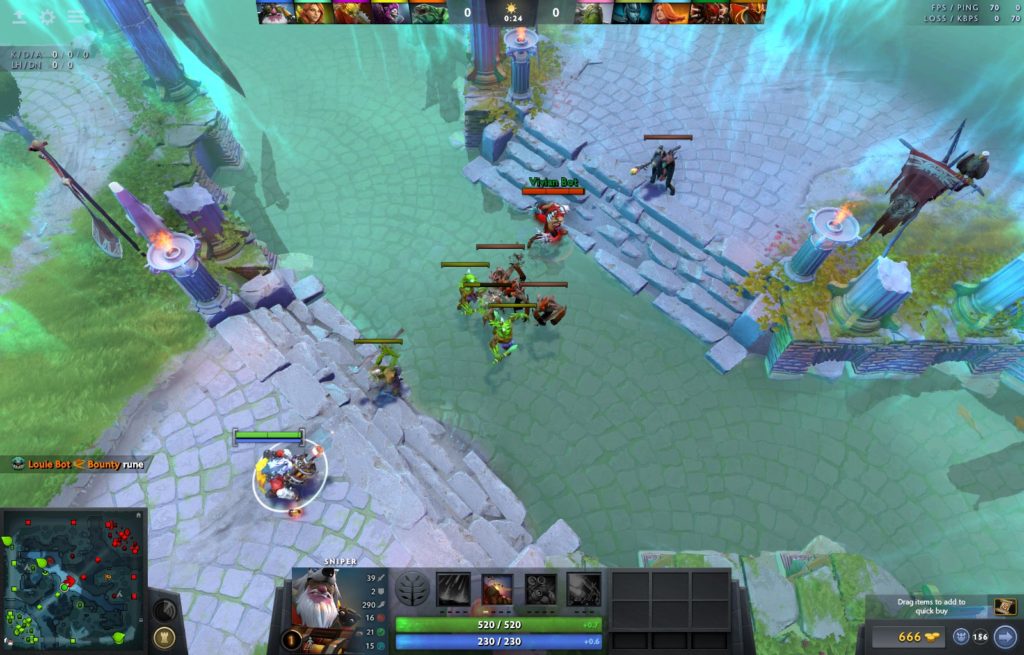 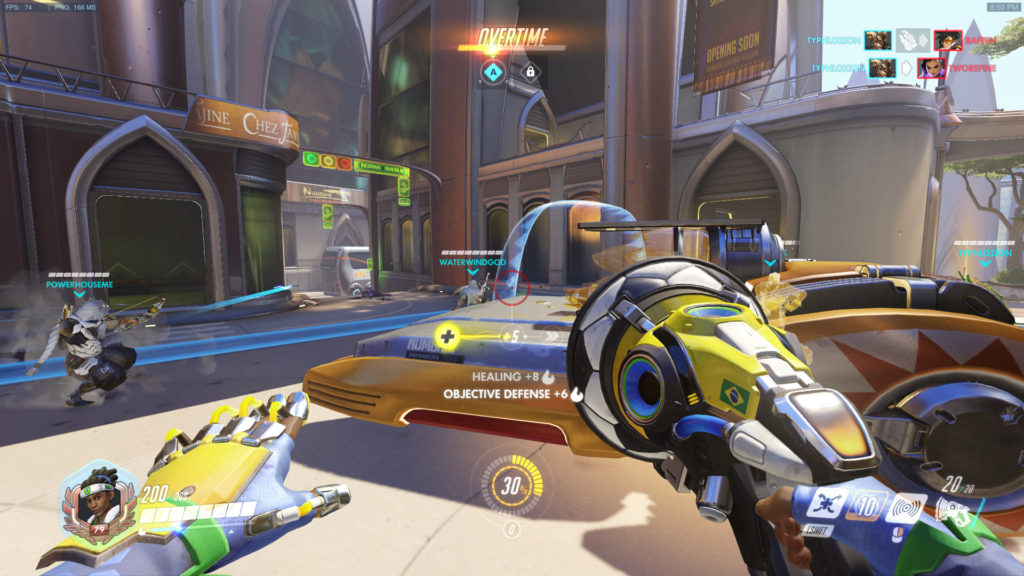 I’m a very discerning guy, I don’t excessively splurge on items that are ludicrously priced but if I was in the market for a desktop that would fulfill my everyday and gaming needs, then no question I would purchase the G20 without thinking twice. Asus build quality has always been their strong point and it shows here, building a very solid system that you know is built to last. Performance is no slouch either, and since I used it primarily as a gaming device, all the games I tried played flawlessly at max settings, giving me the impression that other programs and software will run on this system without breaking a sweat. I personally do not know how to build a PC and I have limited knowledge of the finer details but that’s the point of this desktop, you don’t need to know how to assemble a rig! There’s a good group of people that fall into this demographic and Asus has targeted those specifically and the result is a system that you literally just plug it into the socket and you’re good to go.

The G20CB retails for 99,995 and is available at your nearest Asus and ROG retailers. For a full view of the specs, see the chart below:

- Advertisement -
Previous article
The New Day Arrives at Wrestlemania 33 With a Tribute to Final Fantasy
Next article
Blizzard Teases New and Original Content for Overwatch This April!