Uncharted: The Lost Legacy Review | Move over, Nathan. Chloe’s carrying on the Legacy! 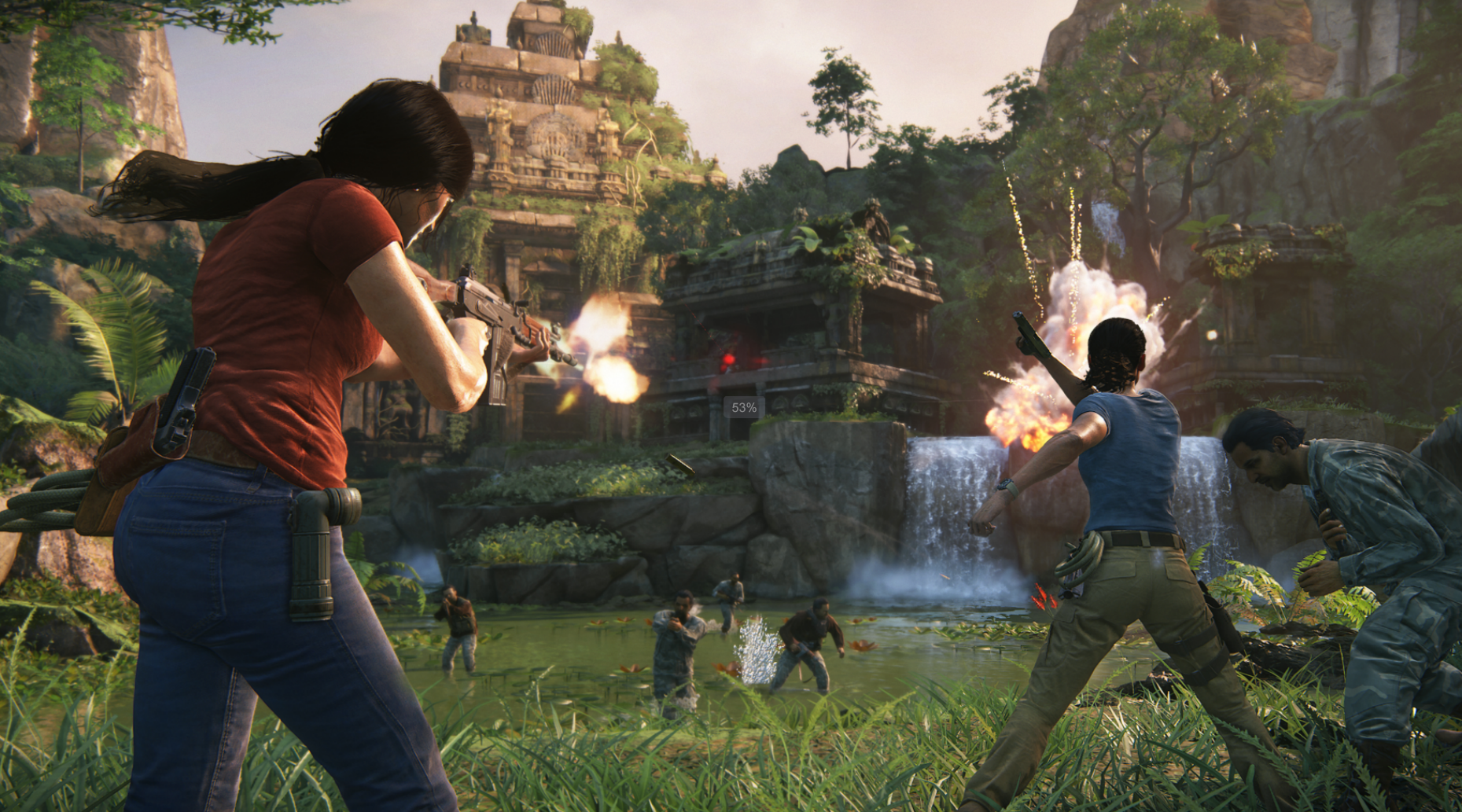 With less than a week to go before its release, Uncharted: The Lost Legacy has been a title that has received mostly positive reactions since its announcement during the 2016 PlayStation Experience event, even after the fact that Nathan Drake won’t be returning for this installment. Drake has been the main protagonist of the long running series and, since the conclusion of Uncharted 4: A Thief’s End, a new lead character in the name of Chloe Frazer is point and center and ready to take on the reigns of this DLC-turned-standalone game. Hyped enough? Join us as we dive into our spoiler free review of Uncharted: The Lost Legacy!

Before anything else, I’d just like to say that the game should be played on a Playstation 4 Pro if and when possible. I got the chance to play it on both iterations of the Playstation 4 and there’s a noticeable difference, making The Lost Legacy one of those games that takes advantage of the hardware capabilities of the Pro. Edges are smoother, movement is more fluid, and everything about the game just looks more vivid and lively. It is not required and you may still opt to play the game on a regular PS4 but we’re just recommending the Pro for maximum eye candy. 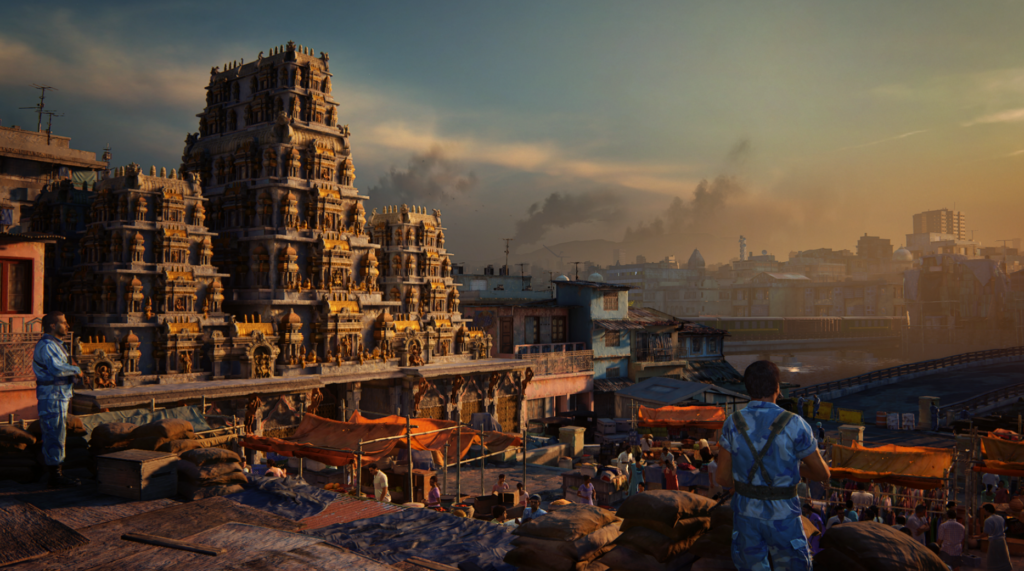 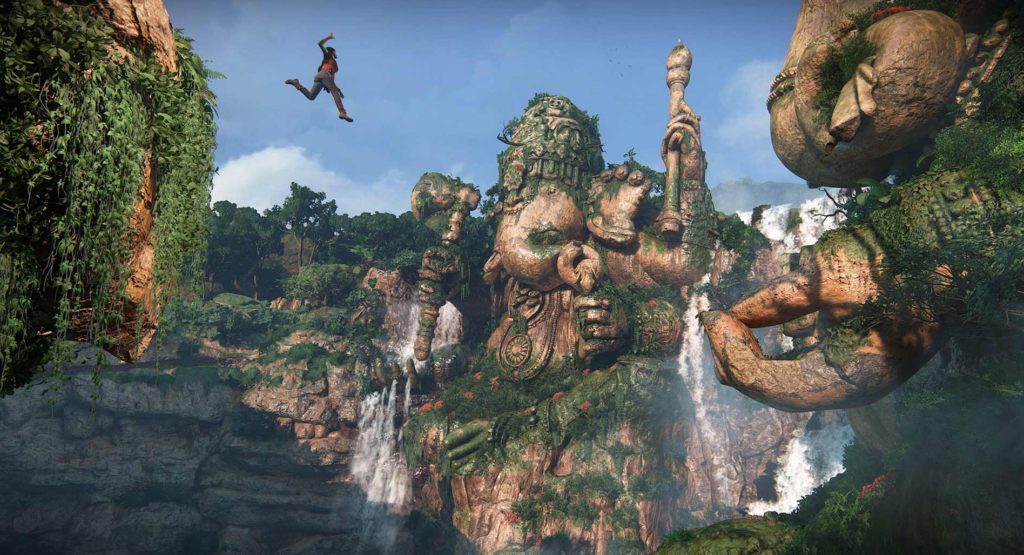 With that out of the way, Uncharted: The Lost Legacy is the new standalone game from Naughty Dog, the same guys who brought us timeless classics such as The Last of Us and Crash Bandicoot. Fans of the Uncharted series might take a while to warm up to the new lead, Chloe Frazer, but will soon realize a different kind of charm with her character and how she interacts with Nadine, whom we’ll get to in a bit. We’ll surely miss those Drake and Sully moments but we’re not complaining about the Chloe and Nadine narrative that plays out very well throughout the game, which you’ll see develop and manifest itself during gameplay as Nadine becomes a much more active participant in the greater scheme of things as you progress.

Interesting tidbit – During my travels, Chloe and Nadine were talking about a topic which got cut off due to a certain scene. They promptly resumed the conversation with a casual “what were we talking about again? oh right”. A small touch, but it’s the little details like these that steal the show and fully realizes their interaction over the course of the game.

The plot is simple – Chloe takes on a journey to recover an ancient Indian artifact and in tracking it down, she enlists the help of former Shoreline leader turned mercenary Nadine Ross, who as you might recall made her appearance during Uncharted 4. The game takes you through a number of breathtaking set pieces – from the crowded street market and grimy back alleys to the mountains of India’s Western Ghats. Each location is stunningly rendered and as with all Uncharted games, playing the game makes you feel like watching a movie at the same time. At certain times, you may find some vantage points that allow you to take pictures using your phone which unlocks interesting details and story points that add to the immersion factor. Nice view huh?

Players can also take full advantage of these environments using the built in photo mode where you can literally stop time and take that Instagram worthy shot. The photo mode is pretty robust, allowing you to not only tweak basic items like camera angles, but also change filters, add a depth of field effect, motion blur, frames, logo overlays and fiddle around with all sorts of settings that will surely make the photographer in you giddy. You can even adjust the angle of the sunlight to cast shadows in certain directions! With so many possibilities, you’ll surely drown yourself in photo mode and even forget you’re playing a game for a bit of time.

If you loved Uncharted 4, then this is right up your alley. If you’re a first timer in the Uncharted series, feel free to jump right in. Even with the new characters, The Lost Legacy is easy to pick up and enjoy and although there may be story references here and there, it’s not enough to put a damper on the game. Controls are well done too and it definitely feels a lot like Uncharted 4. Chloe does not feel slippery or sluggish to move around the world and she responds well to commands and is as nimble as can get. I get easily peeved when controls and camera angles are bad in a game but The Lost Legacy does pretty well in that department.

The atmosphere of the game is tense for the most part, and similar to past games in the series, there is always that approach of going into the room with guns blazing but I feel that The Lost Legacy slightly favors stealth based gameplay a bit more. Again, this could be a matter of preference but I felt that a number of levels lend itself well to taking things slowly and quietly, with enemies almost always within reach of an instant knockout. It felt satisfying to pace around and not get spotted and since Chloe is a thief by profession, it just makes sense. Did I mention that there are silenced weapons too?

The addition of lockpicking reinforces the whole stealth mechanic even more. Lockpicking is a simple “mini game” of sorts, where you approach a locked door or crate, turn your analog stick around to trigger a reaction, and repeat the said motion until you crack the layers of the lock. It’s not mind blowing that’s for sure, but finding and unlocking some crates can lead you to be rewarded with weapons and collectibles, which can make the whole experience worthwhile.

Going back to level design, The Lost Legacy does the series proud with superb environments that you can traverse. Sure it’s not a big departure from what we’re used to over the past Uncharted games, but that’s not necessarily a bad thing. In fact, the game introduces the largest free-roaming level in franchise history, a massive environment in the Western Ghats. The trusty 4×4 is back (as well as the grappling hook and the piton) and it will aide you in exploring the area at your leisure, where you can choose to continue with the storyline or sidetrack yourself a bit with more puzzles and encounters that will reward you accordingly. However which way you go will progress the narrative gradually, giving you insight into the characters, their journey, and much more. 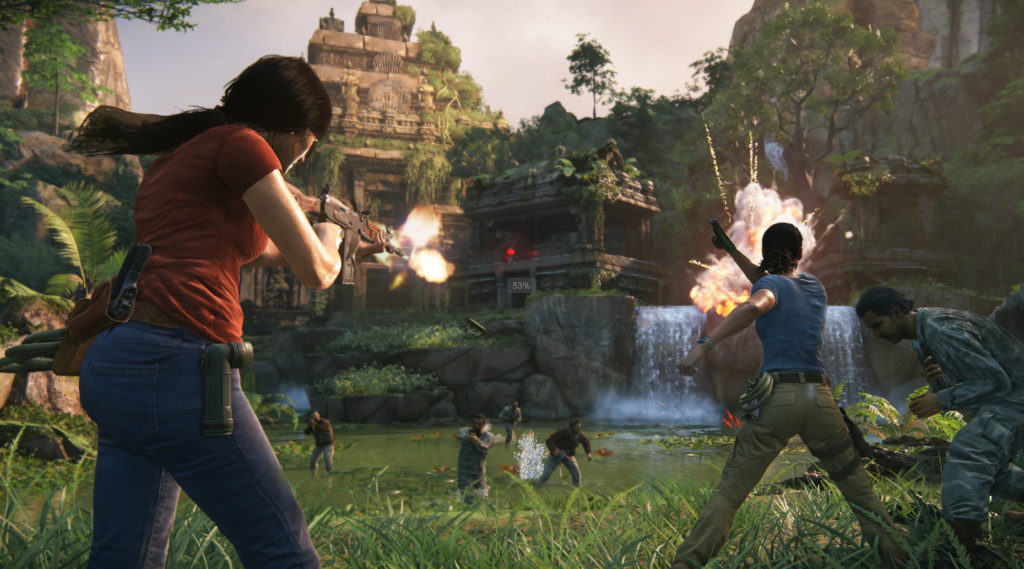 As with all Uncharted games, replayability is a bit of a messy topic. Some players consider them to be one and done, while others relish the challenge of beating the game at the hardest difficulty setting. In The Lost Legacy, players can choose to discover over 100 treasures and optional conversations as they make their way through the nooks and crannies of the world. Upon completing the game, additional unlocks such as render modes, character galleries, character skins, and much more can be accessed.

While there is a sizable amount of things to do and find in story mode, multiplayer is no slouch as Uncharted: The Lost Legacy gives you access to ALL of the multiplayer content from Uncharted 4 – competitive multiplayer, cooperative survival mode, as well as all of the DLC. The Lost Legacy also introduces a Survival Arena Mode which is a 1-3 player cooperative game mode that has you defending against evolving waves of enemies and round modifiers. It certainly is a fun distraction, but the masterful game experience is still to be had from the story mode.

Uncharted: The Lost Legacy is another masterpiece of a game and we would never expect anything else from Naughty Dog. The game is immersive, the encounters are intense, and Chloe does a fine job filling in the big shoes that Nathan Drake left. It will be interesting how the Uncharted franchise will move forward with this but for now, Chloe and the gang will definitely be taking the spotlight. We give Uncharted: The Lost Legacy a well deserved 9/10! Check out a few more screens below and get yourself ready for the game as it hits local retailers on August 22! 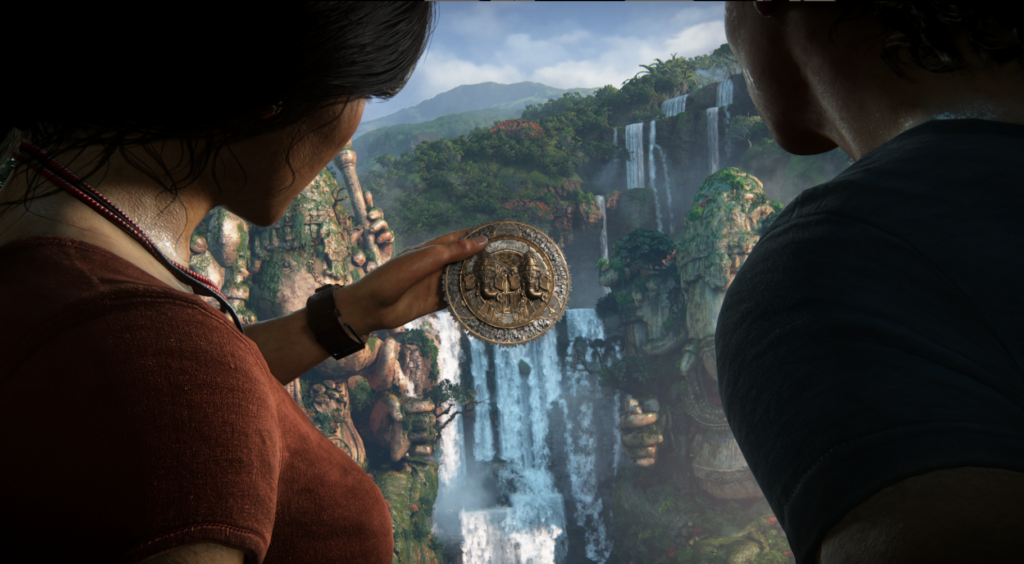 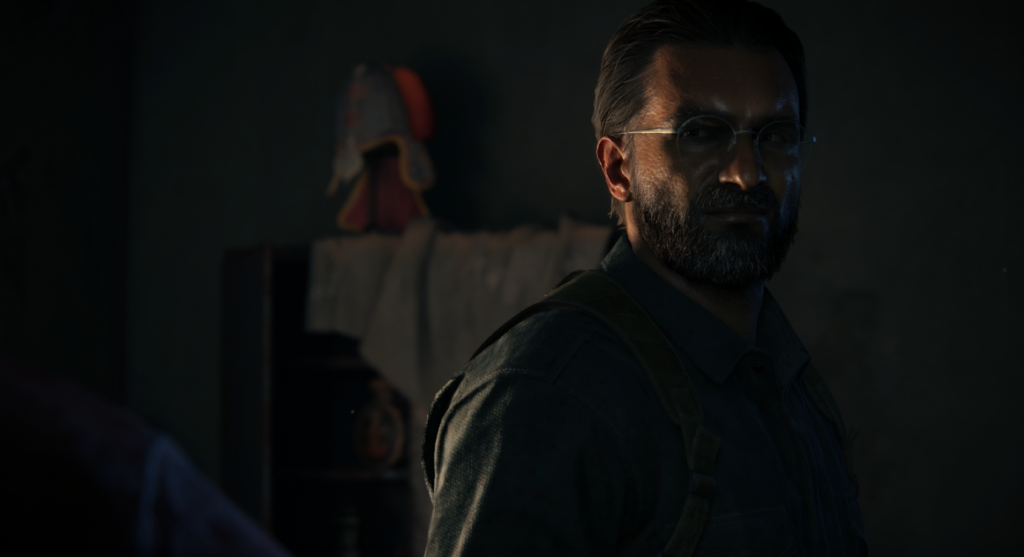 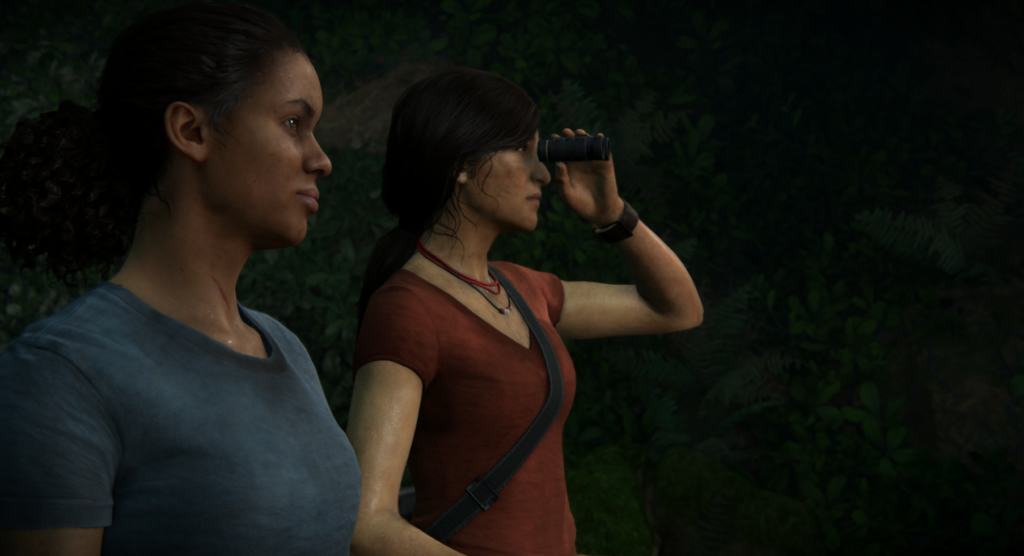 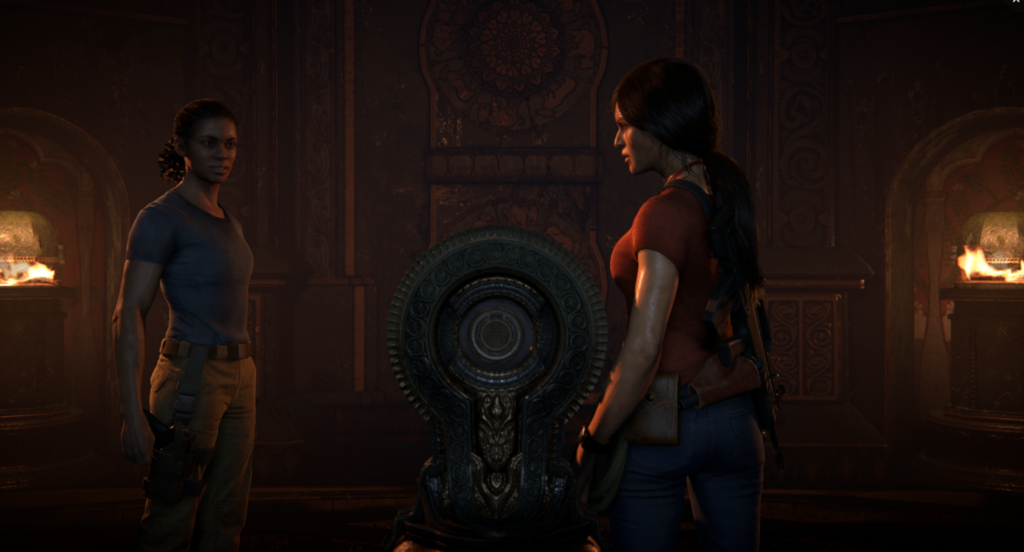 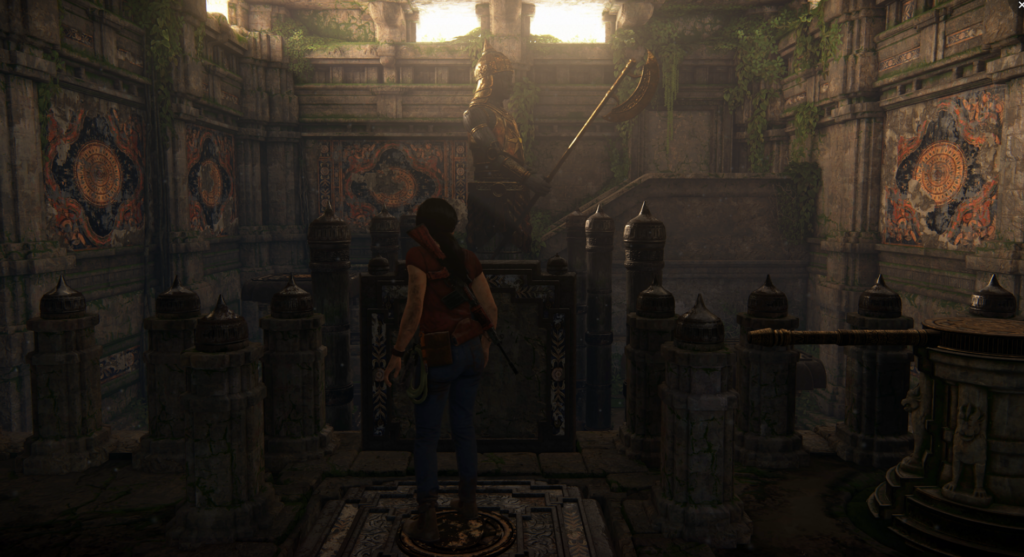 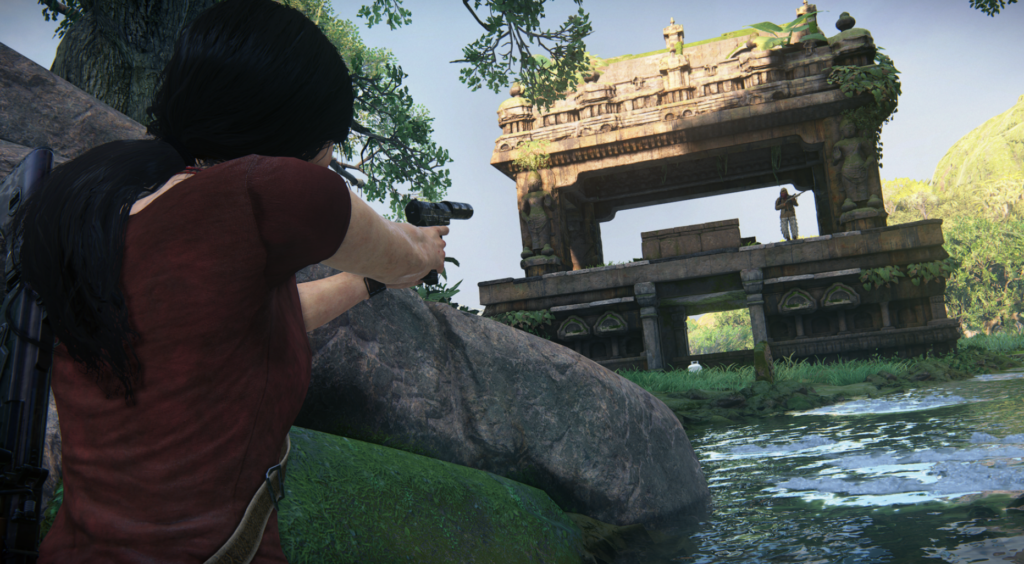 Liked that? Check out our other Uncharted articles!