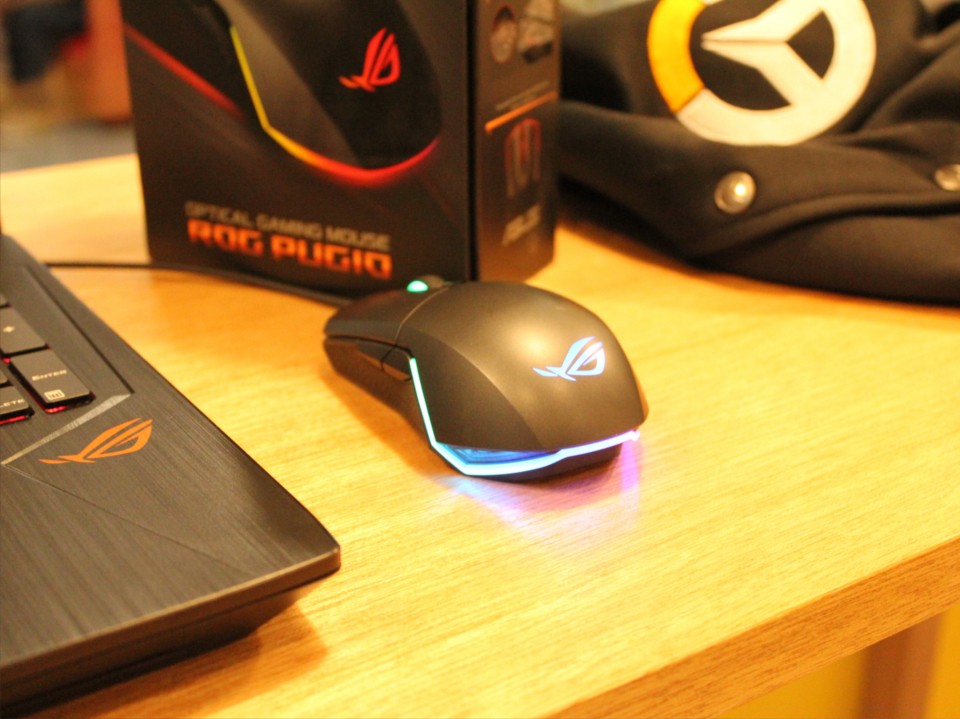 Are you still playing on the mouse that came bundled with your PC? Or are you gaming on that cheapo USB mouse that you bought on sale for under 300 pesos? Throw that crap away and get a gaming mouse! Having high quality peripherals like gaming mice is a great way to show that you’re part of the Master Race; and make it an RGB one for extra gaming cred! Not to mention that gaming mice are much more comfortable for long gaming sessions. 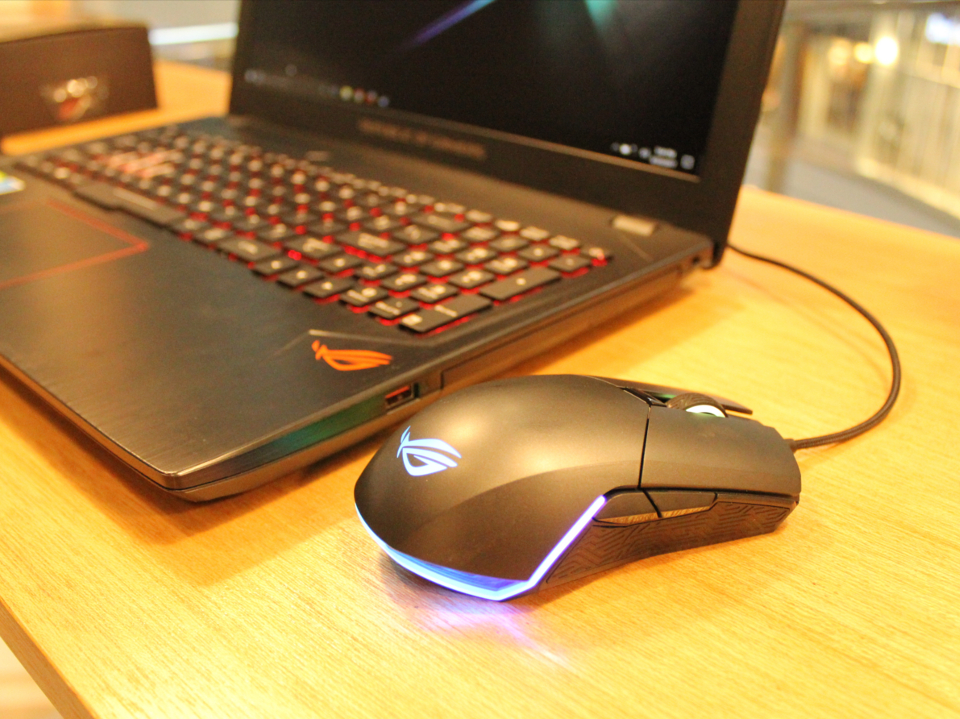 Convinced? Well now is a great time to buy one, as there are tons of great gaming mice to choose from. One such mouse that you may consider is the ASUS ROG Pugio, which is a wired ambidextrous mouse – meaning that it’s made for both right and left-handed folks. The Pugio is ambidextrous because it has two sets of buttons on both sides, unlike some gaming mice that only have buttons on the left side. 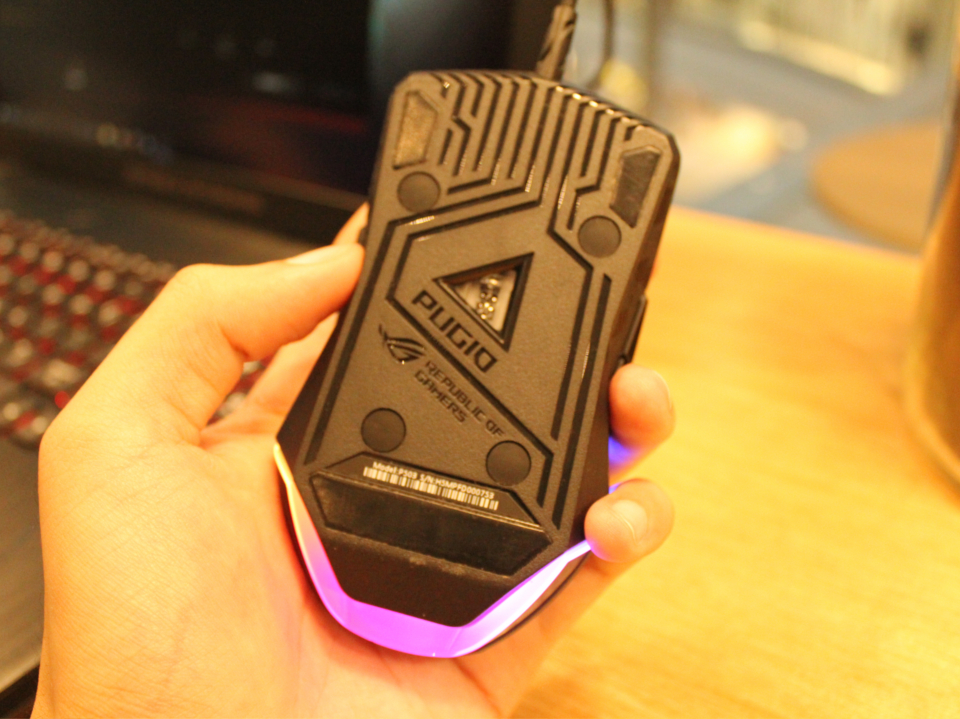 Though before you notice the shortcut buttons, the first thing that’ll probably come to mind with the mouse is how it looks. The ROG Pugio is a cool-looking mouse, with a nice matte finish, along with “Mayan-inspired” designs on the sides and back. We don’t really know it’s an accurate Mayan-style design, but it’s surely a looker! And the best thing is, it’s not just for show, as the rubberized material at the sides help in gripping the mouse better. 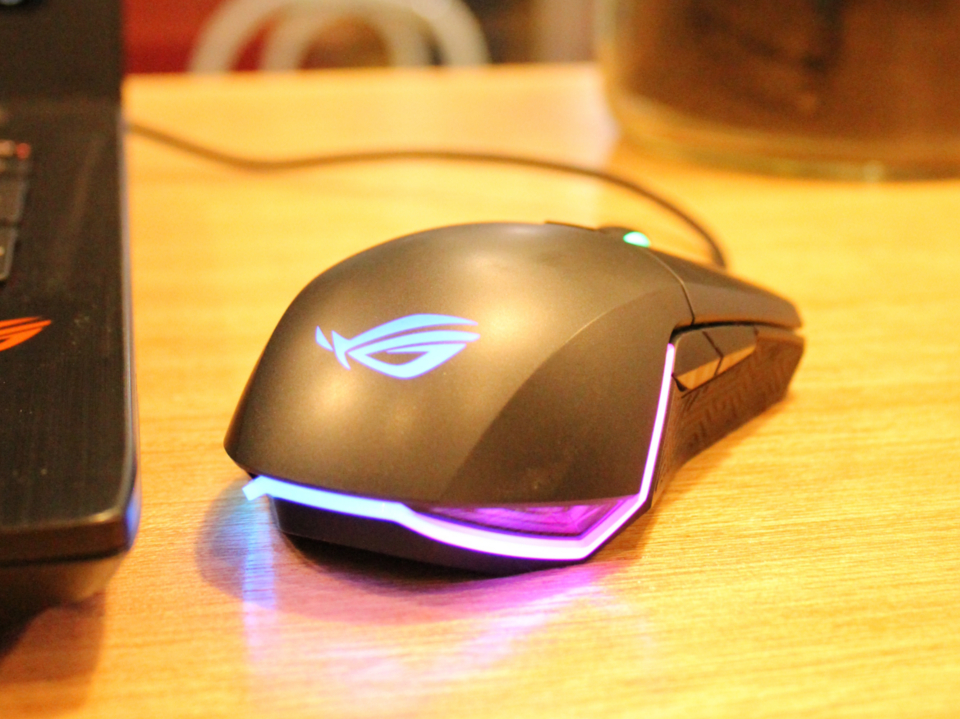 Speaking of design, plugging in the Pugio into your PC/laptop will activate its RGB lighting, complete with a wave of different colors as its default setting. You can change the colors, along with the mouse button settings with the ROG Armory app, which can be downloaded at the ROG website. And if you use the mouse with an ROG laptop/PC with an ROG motherboard that supports ASUS Aura Sync, you can sync the mouse’s colors with your battlestation’s color profile. 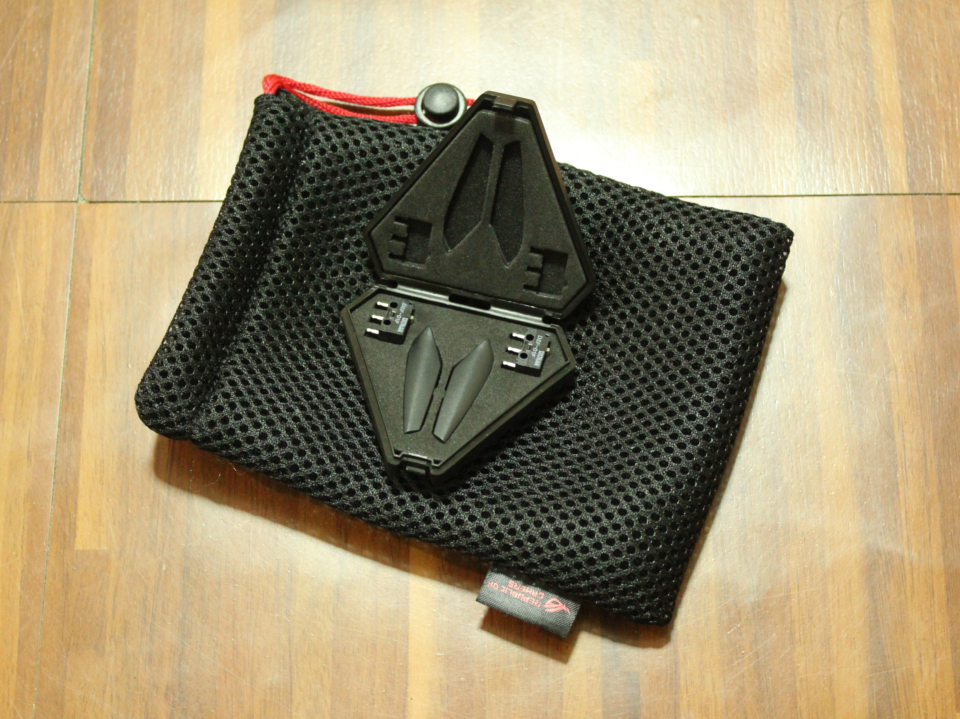 Bundled along with the Pugio is a carrying pouch, and an accessory case that contains side button covers and two extra Omron switches. The side button covers can be used in place of the buttons to avoid misclicks, and the extra switches are included to lengthen the Pugio’s lifespan. Replacing the switches are also easy thanks to ASUS’ push-fit switch socket design. 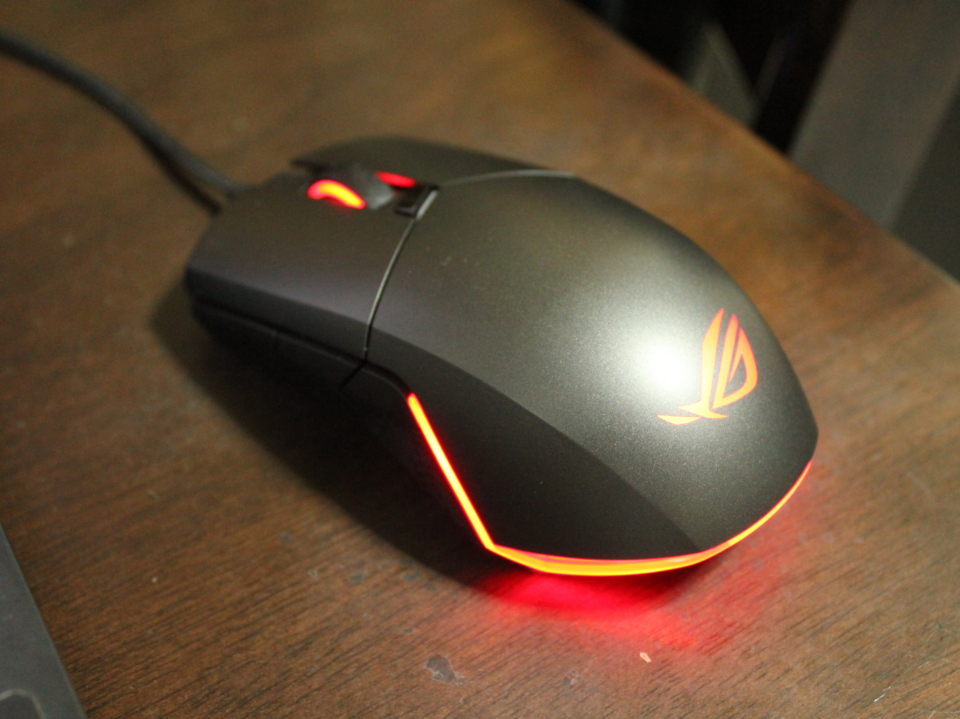 With all those out of the way, it’s time to ask, “Is the Pugio actually a good mouse for gaming?”. YES, it’s very much an excellent mouse for playing games. As it’s not designed for just one game genre (unlike dedicated FPS or MOBA mice), playing Overwatch or Dota 2 feels great with the Pugio. The buttons provide a nice tactile feel that’s satisfying to click, and the mouse is comfortable with almost any type of grip (palm, claw, and even fingertip).

Its main strength can be seen as a weakness though (as cliché as that may sound), the fact that it’s not made for a single game type means other specialized mice beat the Pugio. MMO-mice for example, have tons of extra shortcut buttons which the Pugio does not have. 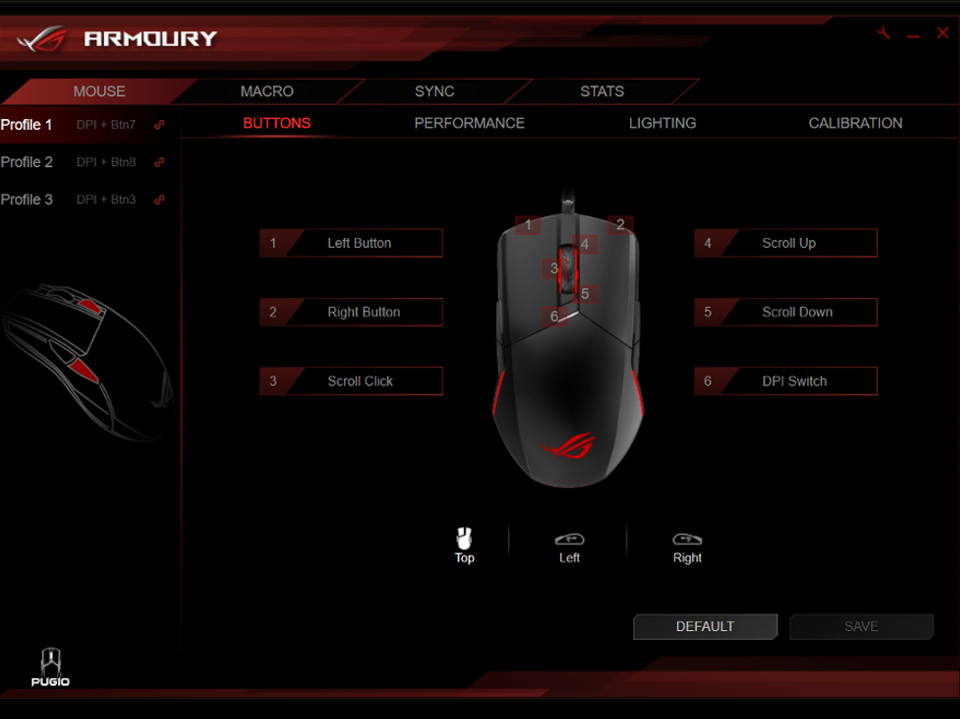 Another weak point of the Pugio is the RGB and software. Some gamers are (sadly) sensitive to RGB lighting, and the default light setting is a loud wave of colors. Changing it is a breeze in ROG laptops/PCs, but not so much with other setups as you have to download and install the software first.

These weaknesses can be seen as minor quibbles though, as the ROG Pugio is still an excellent mouse overall. It’s great for almost all games, and it has a stylish design that’s a certain fit for almost any gaming PC/laptop setup. 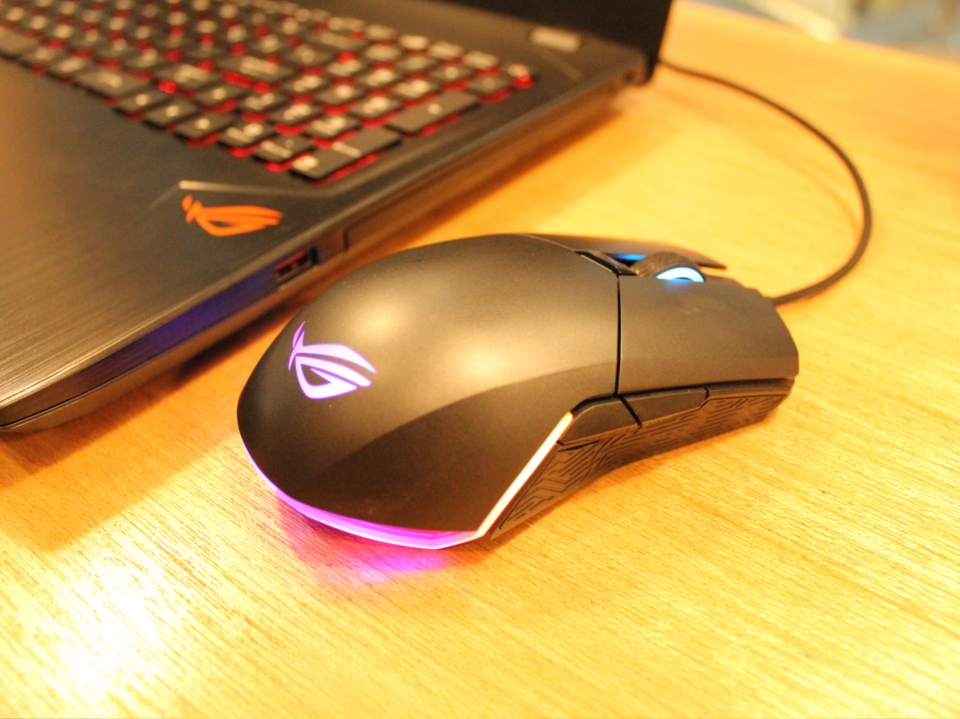 It’s not the perfect mouse though, as those who aspire to be the next CS:GO star or WoW guild leader might want to go for more specialized mice. Bargain hunters might also find it a bit expensive at 3,540 PHP. But if you’re looking to move up the PC Master Race ranks, then you can’t go wrong with the ASUS ROG Pugio.

P.S. If you have an Aura Sync compatible laptop/PC, or if RGB is life, then the Pugio is almost certainly a no-brainer.

- Advertisement -
Previous articleMake Mine Manga! Guardians of the Galaxy Gets a Japanese Comic Series
Next articleGintama Live-Action Movie Philippine Release Date this September