Living up to the Kickstarter Hype! 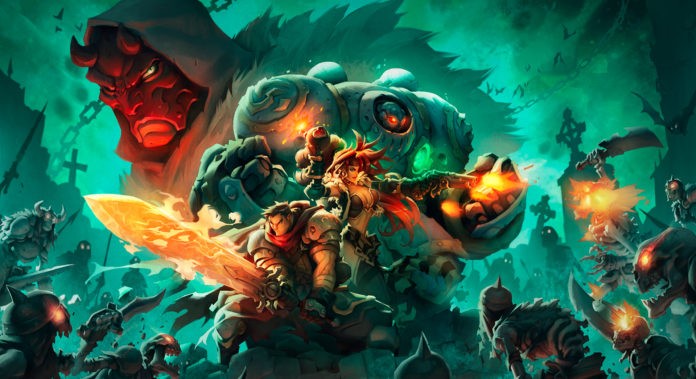 Battle Chasers: Nightwar is a game that many have been looking forward to since it was announced. Developed by Airship Syndicate, this is a game that’s based off the Battle Chasers comics by Joe Madureira. It was fully funded on Kickstarter as of October 10, 2015 and, since then, many have been looking forward to the release. Here’s a quick glimpse through their trailer.

You start as a party of characters – Gully, Calibretto, Garrison, Knolan, and Red Monika – trying to find out about MANA in a certain isle. Sadly, the trip there turns disastrous as you get intercepted by bandits on your airship. The party then becomes separated during the crash and your journey begins. 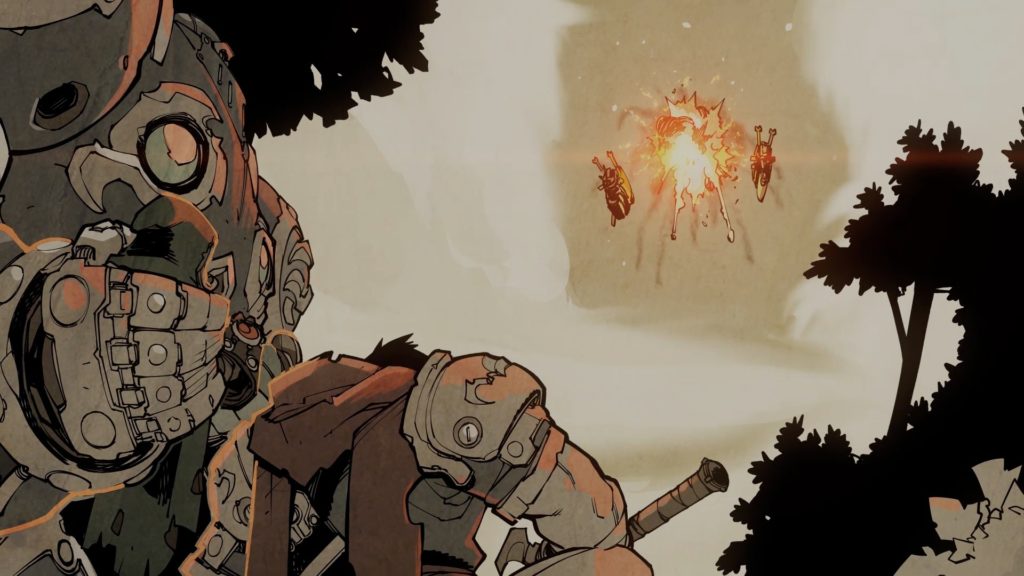 There is no doubt that Battle Chasers: Nightwar looks ABSOLUTELY BEAUTIFUL! The comic book artstyle fits the game so much and is probably a very nice touch for fans of the comic book series. As far as cinematics go, the game really does follow a sort of comic style to how it narrates things. 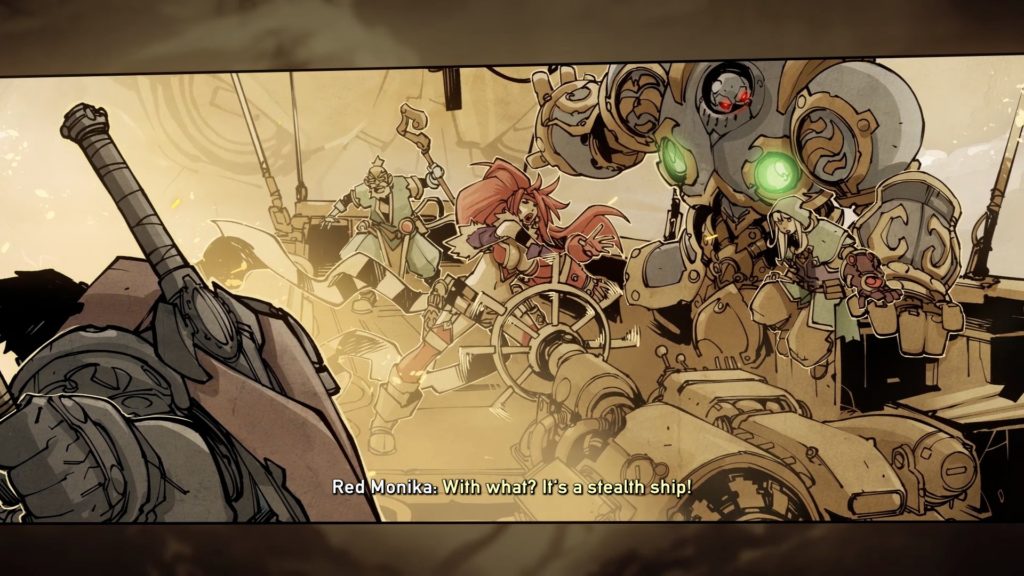 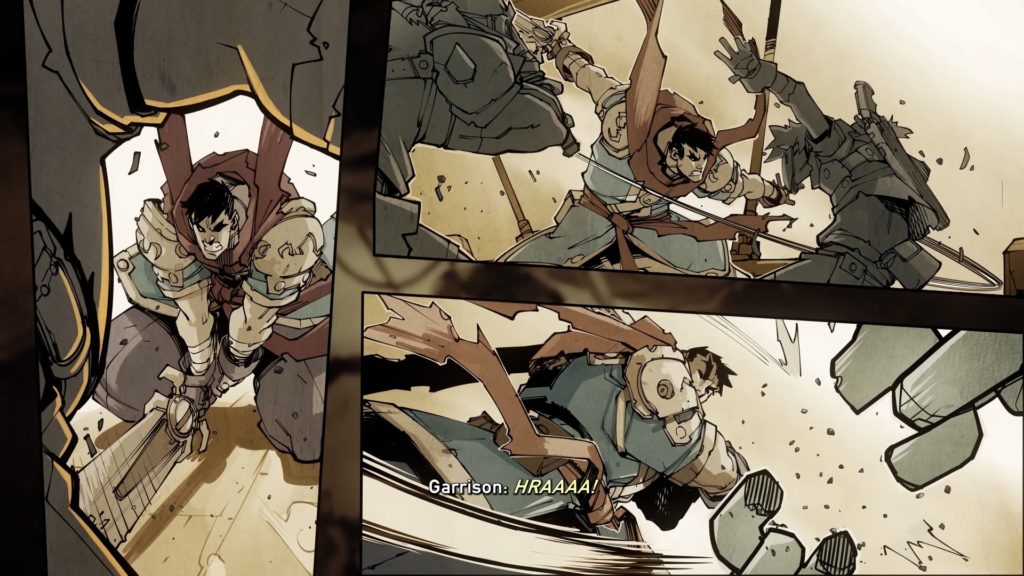 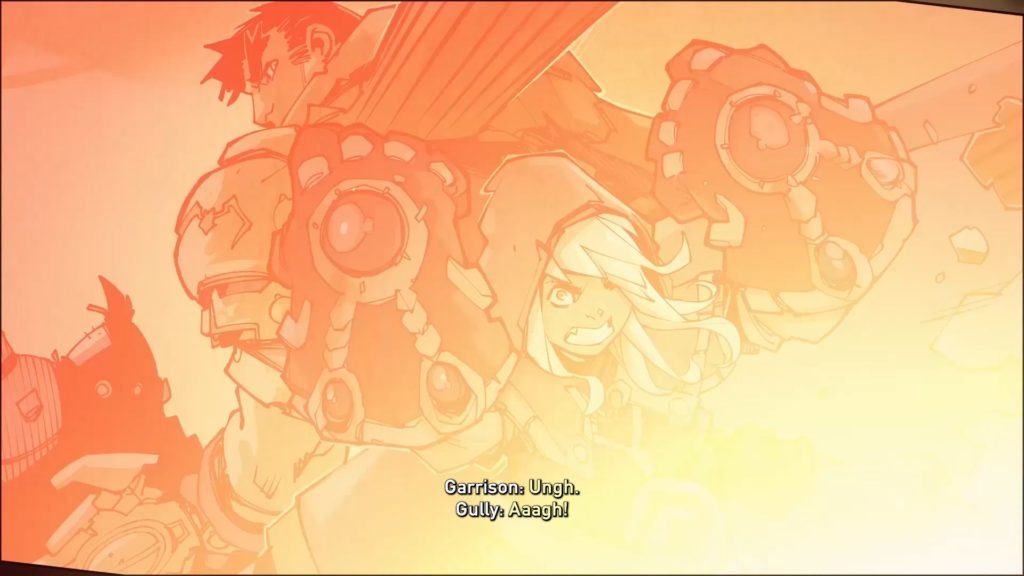 In-game, however, everything is just a visual treat. You can divide the stuff you’ll see in 3 types – Dungeon View, Overview, and Combat.

Dungeon View is what you see when you’re inside dungeons or exploration areas. The game takes on a very Diablo / Torchlight-esque 3/4 Overhead View with the character in the center. The game models and the environment looks amazingly polished and playing through dungeons is definitely a feast for the eyes as you get to enjoy the background visuals from waterfalls to lighting effects and more. If you were ever the type of gamer who puts a premium on graphics, Battle Chasers: Nightwar will most probably not disappoint you. 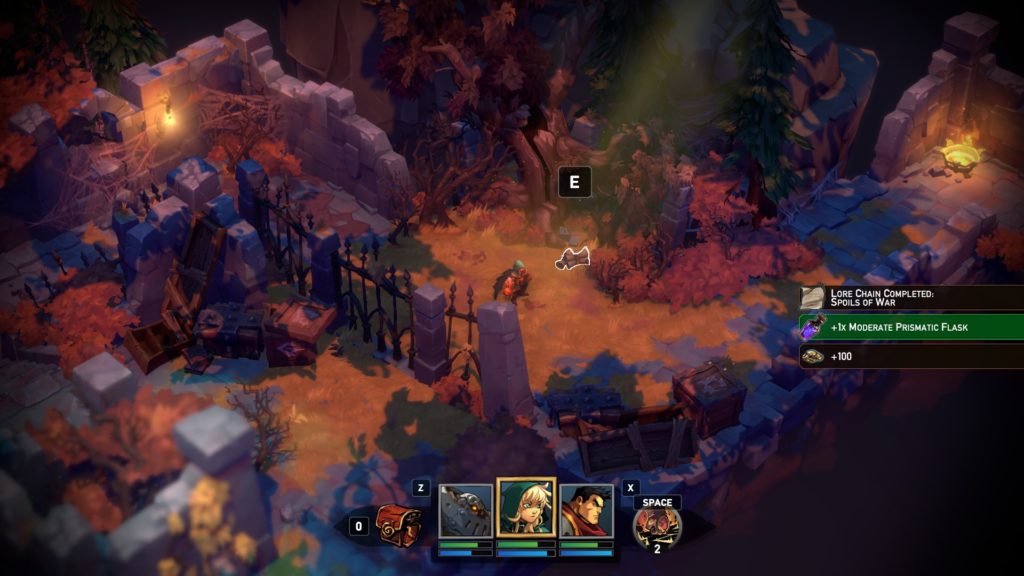 Overview is what you’ll see when you’re traversing the world map. Dungeons are usually just areas so when you’re in between these, you’ll be moving across the world map with this view. Things look more comic book-y when you’re on this view, which is still not a bad thing. 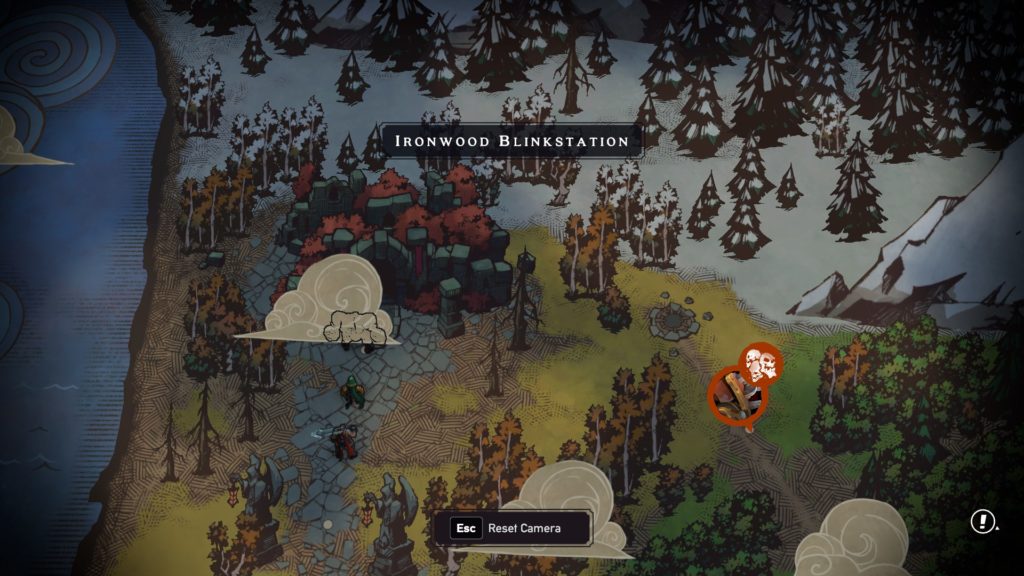 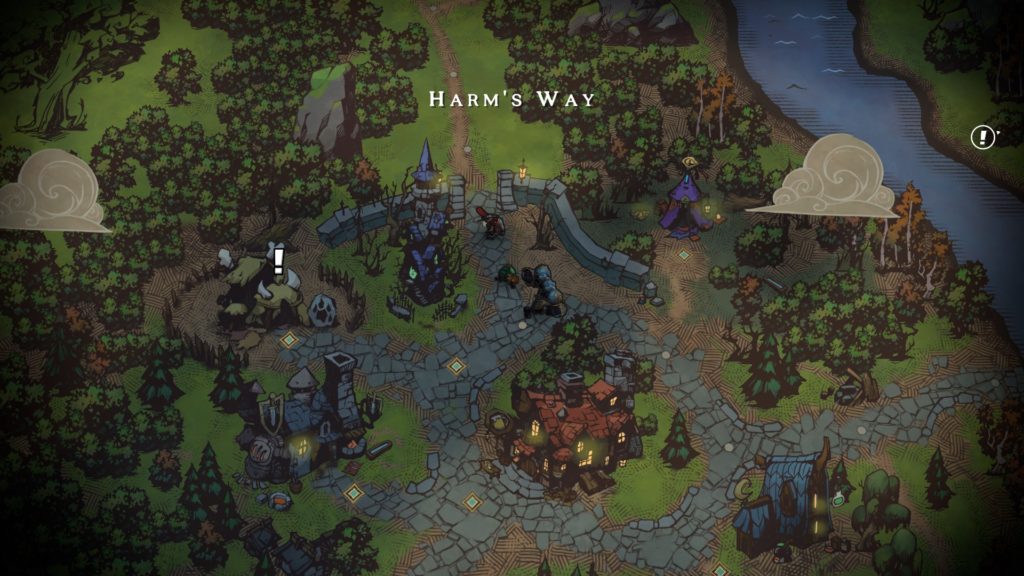 And then there’s Combat View which is just LOVELY. While you know it’s following the typical look from older turn based RPGs, you can’t help but notice that the character models here all have that next-gen sheen to them. Calibretto on the combat screen just looks amazing and the attack animations look pretty smooth as well. Character models also update depending on the weapons they have. 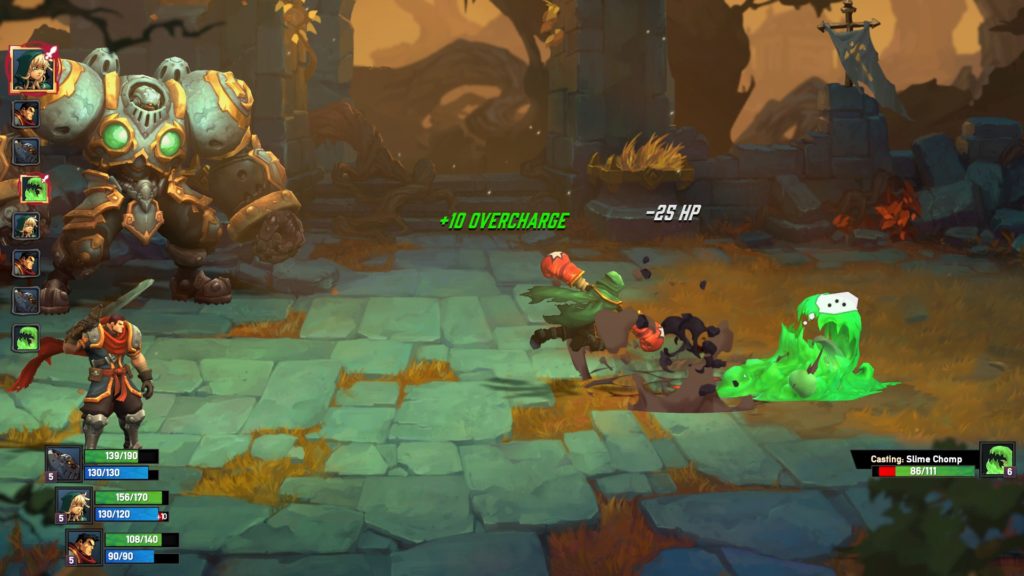 Gameplay is GREAT but not Seamless

Battle Chasers: Nightwar honestly plays really well. At its core, the game is akin to the old-school turn-based RPG genre. On the overview, you have your towns and inns where quests are given, item purchases are done, and so on. During the dungeons, you look around for chests, treasures, and solve puzzles while engaging enemies. When in combat, you’re in for an FFX-like experience where you see your initiative bar and you see how certain actions you take affect your place in the initiative bar. I’m a sucker for the “think it through” style of combat hence this was a definite selling point to me for Battle Chasers” Nightwar. 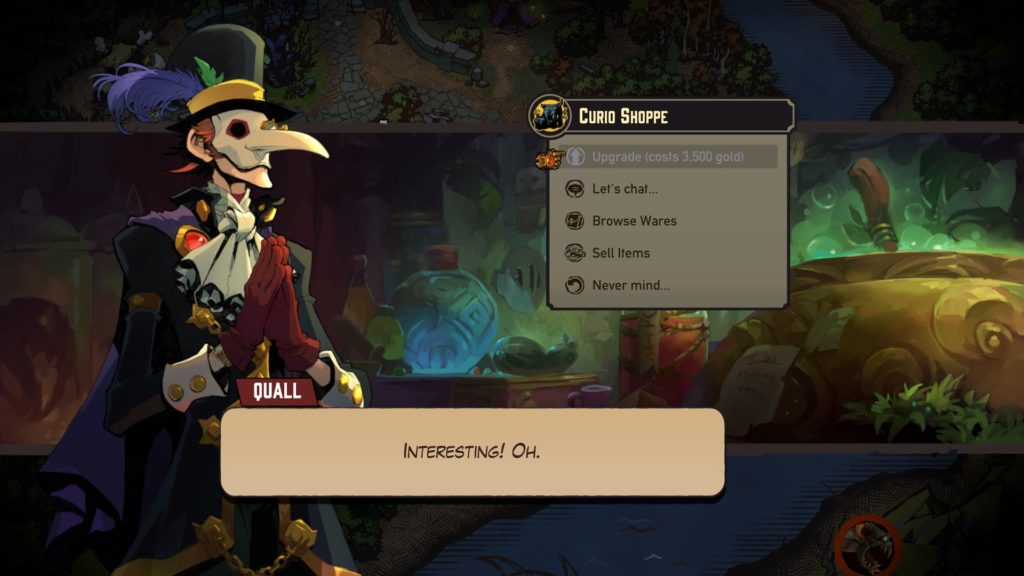 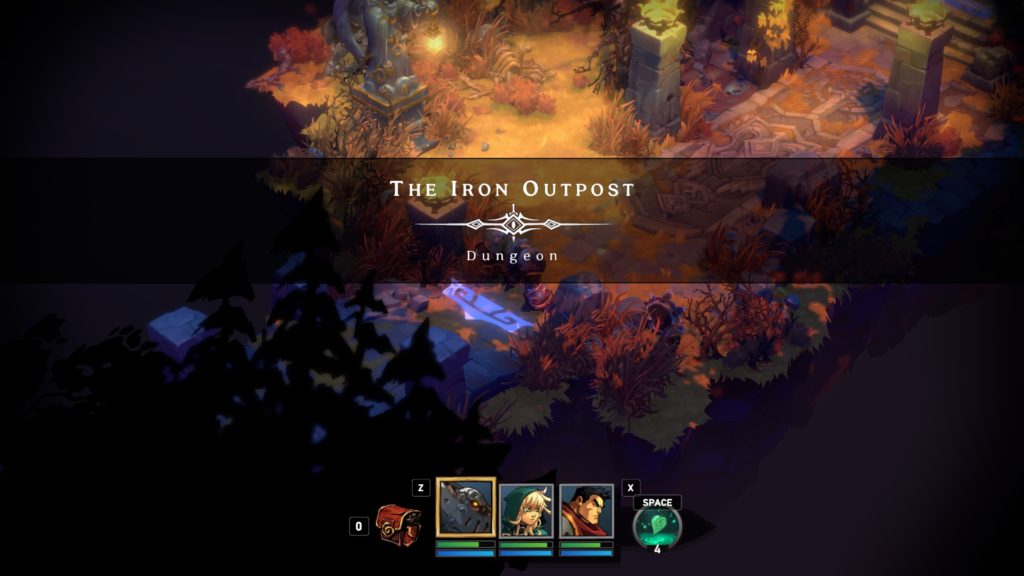 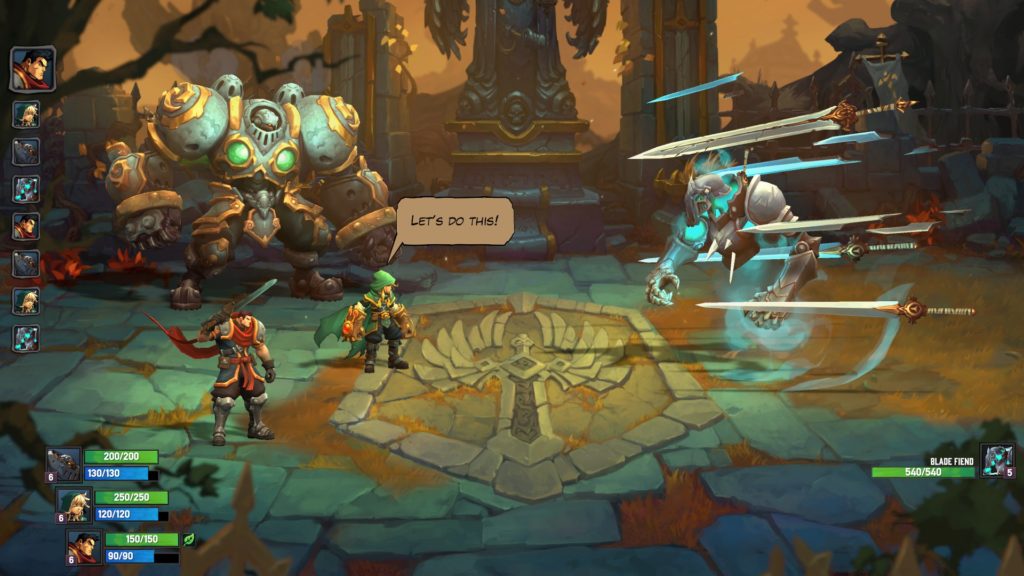 While the skeleton of the game is rooted in your typical old school RPG, it does mix in A LOT of various mechanics that makes it all the more interesting. HOWEVER, this for me was both a PRO and a CON for Battle Chasers: Nightwar. In just the first hour of the game, I was already introduced to the concept of OVERCHARGE (basically, battle mana that gets charged by attacking and defending in combat ON TOP of your regular mana), the limited use of unique character skills in the Dungeon View, Character perks (passives that you learn as you level and can allocate points to at will, Lore bonuses (completing certain lore series gives you rewards), Crafting, and MANY MANY MORE. 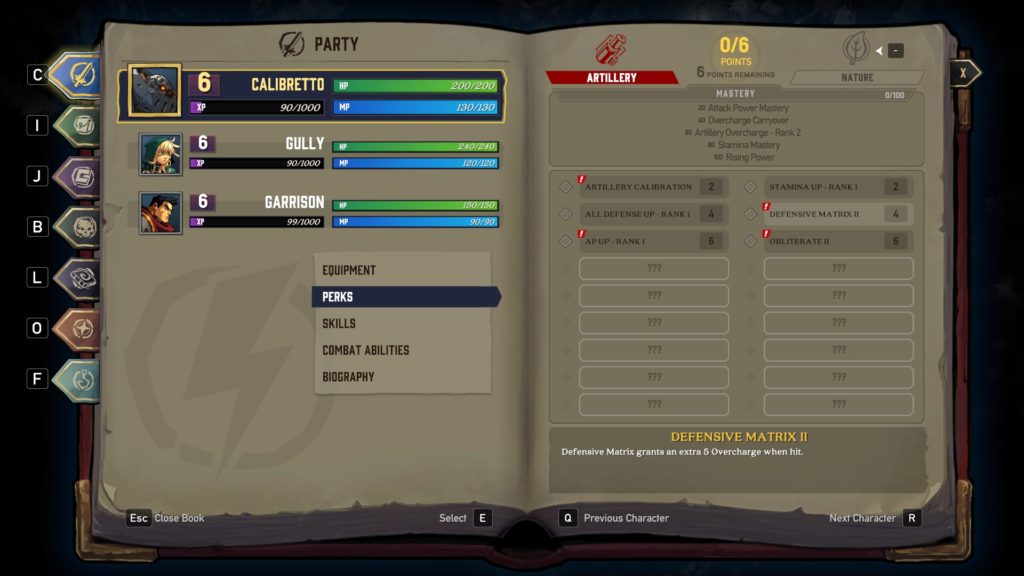 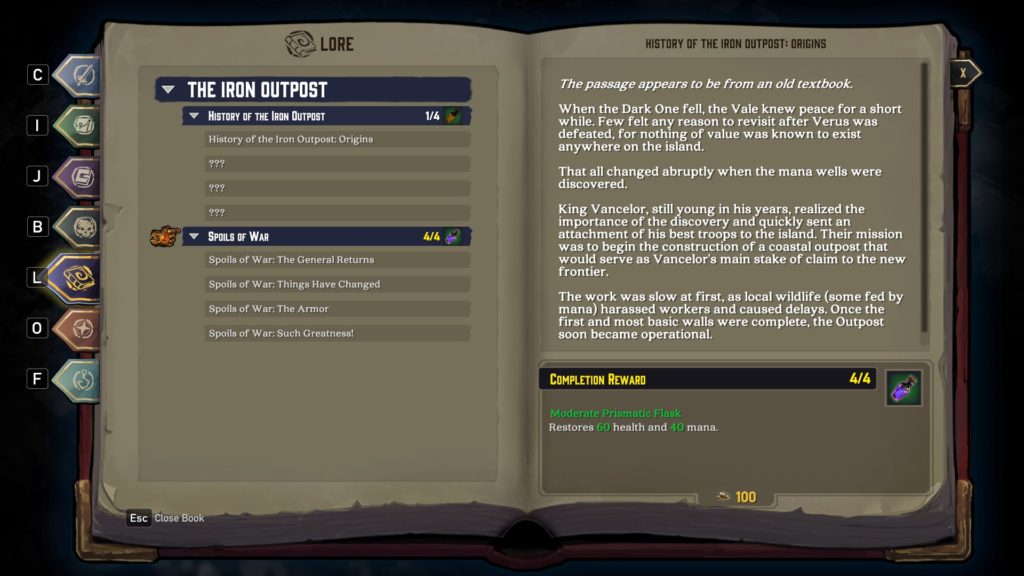 Like I said, while this DOES keep the game interesting and gives it its own identity, the introduction of these features were usually not seamless at all. The game doesn’t do that great of a job at explaining to you how things work. There’s no smooth storyline way that the game uses to introduce these things to you and you’ll find yourself checking the IN-GAME MANUAL from time to time to understand certain things. 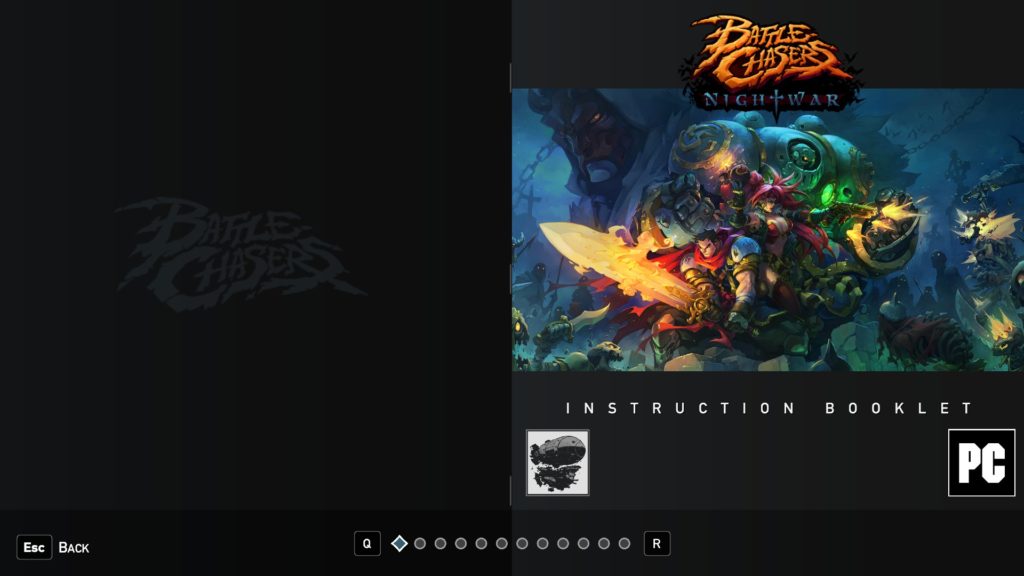 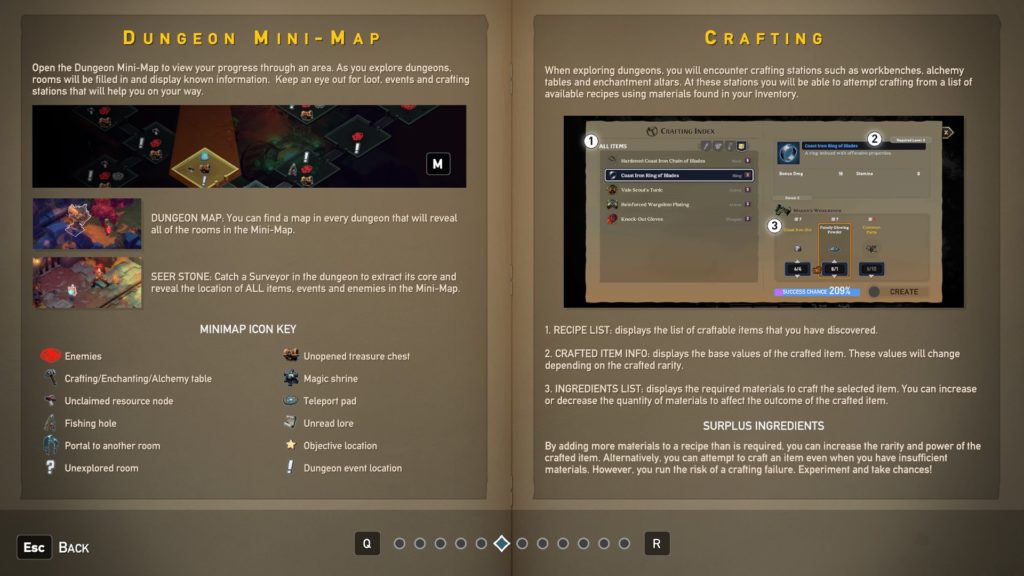 This is NOT a huge deal breaker, of course, as I know some players actually want to just discover things on their own rather than go through a tutorial. The only reason I’m bringing it up is because I found the experience of checking with the manual to be a bit jarring from the flow of the game. While I am thankful that the Game Manual is there (as it kinda gives me that nostalgia of reading game instruction manual from before), there would be times that I’d wish things would just flow naturally as well. There were times though that I really needed to look at it. Like the Dungeon Map didn’t have a Legend so I had to check with the Manual just to check what the symbols meant. In short, I love that the manual is there. I hate that you need it.

I will say though that Combat is AMAZINGLY ENJOYABLE! Combat never really gets too easy and you’ll find yourself having to really plan during battles. You’ll find yourself mixing up various status ailments like SUNDER and BLEEDING to effectively take down your opponents. You’ll even have to make the choice every battle if you’ll just use your Mana-consuming abilities outright OR do you build Overcharge first THEN use them so you can save your Mana for when you really need your skills. Do you use your BURST Attack (a party-shared LIMIT BREAK meter) now or save it for later? If you’re using it, WHO uses it? My only wish is that there was more voice acting during battles but that’s just a nice-to-have. 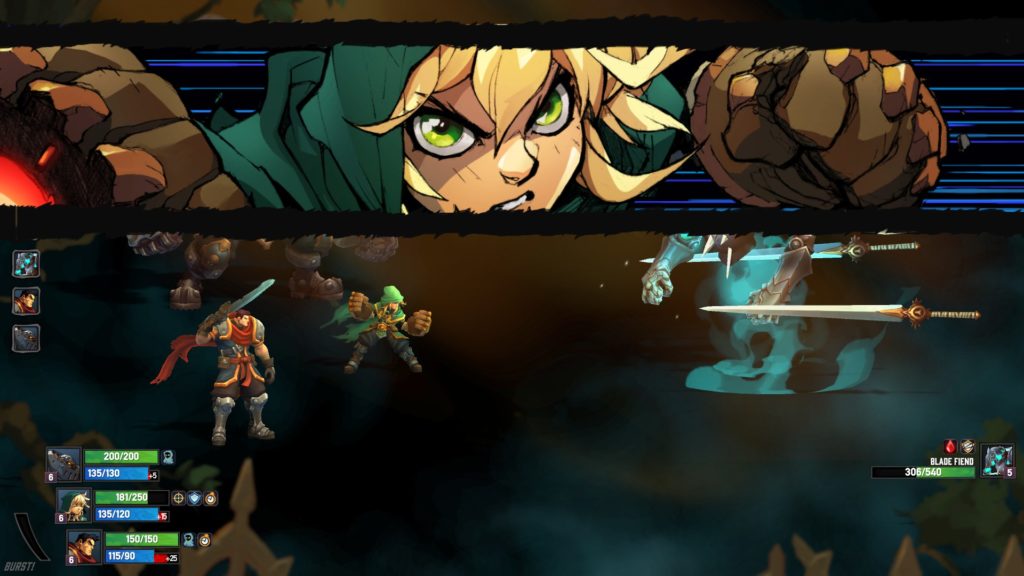 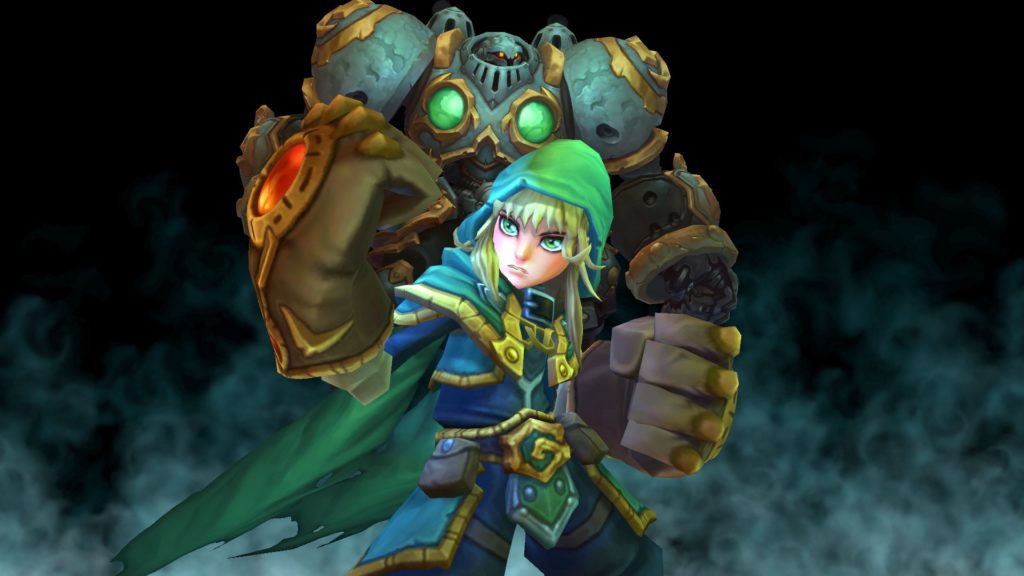 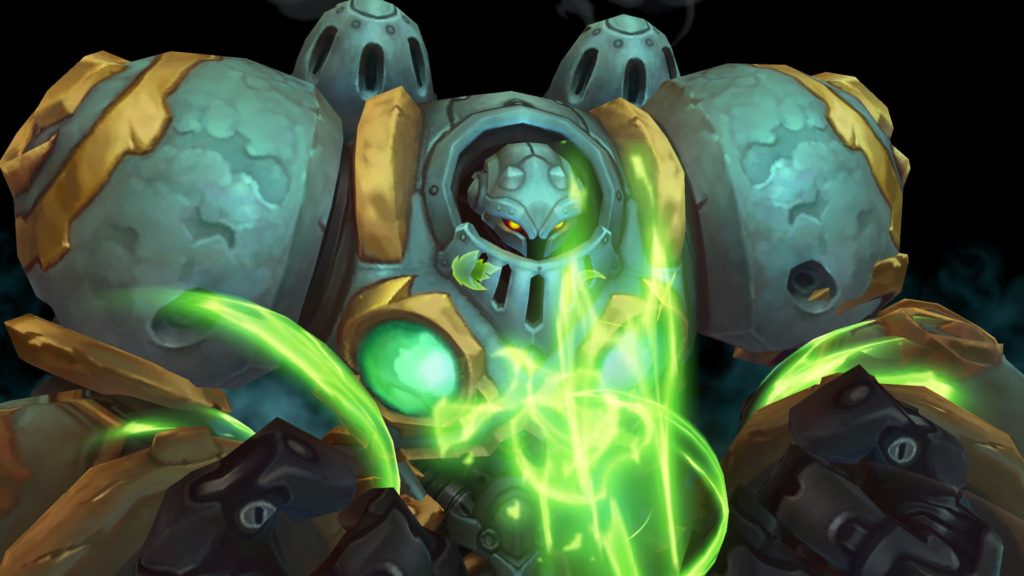 These are a few of the many things you’ll have to consider when you’re in combat and its this aspect of the game that makes the battles so dynamic and enjoyable. There are just so many ways to go about it so you can keep going and not have to rest at an inn soon (which restores your limited personal dungeon skills as well as health and mana)

A Lot of Things to Do

There’s no shortage of things to do in Battle Chasers: Nightwar. While the overworld may seem linear, the game is FULL of things to do for you to enjoy it in the fullest aside from your usual sidequests. You have things like FISHING that gives materials as well as bonuses. You can rerun dungeons and raise the difficulty to get better loot from the dungeon. You can even grind, not just for EXP, but for bonus passives that you get for killing a certain number / types of enemies. The game just simply presents you with so many things for you to enjoy which is great especially if you’re like me who misses playing this type of genre. 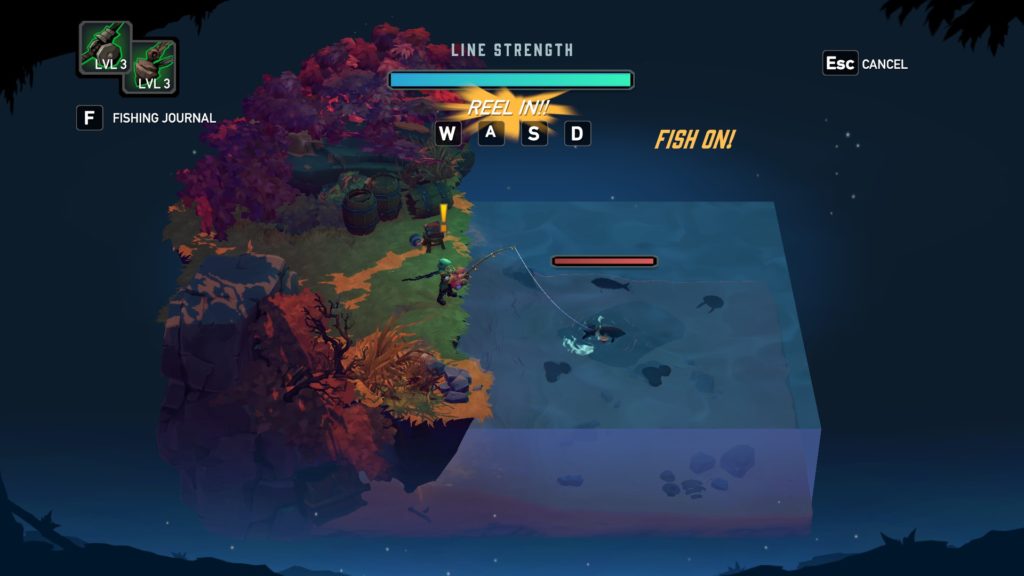 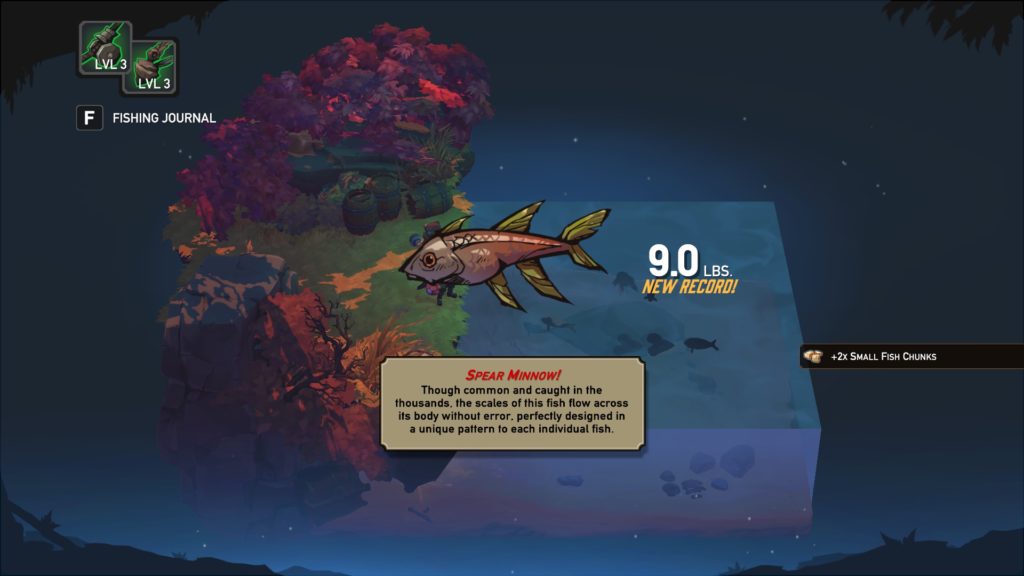 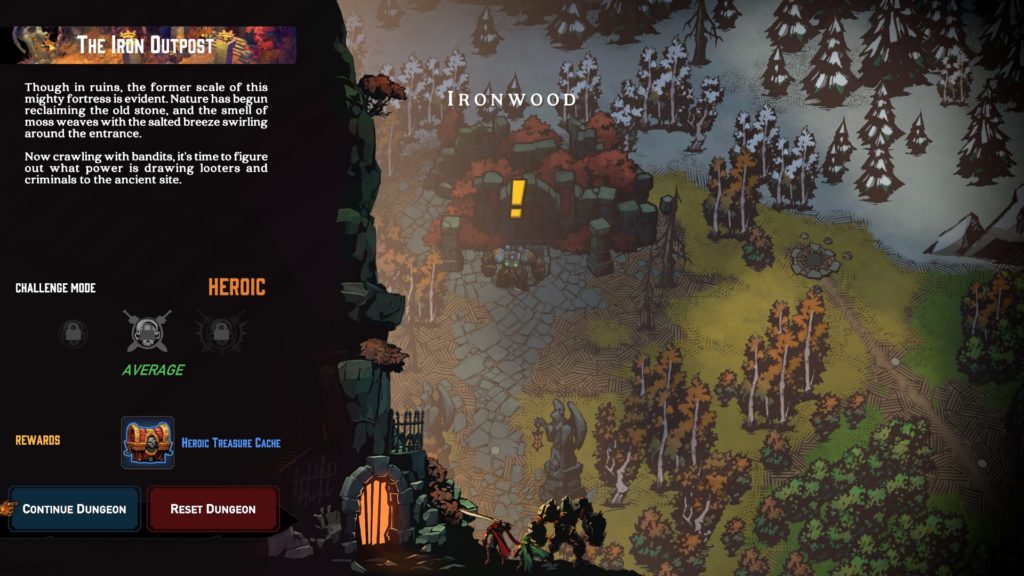 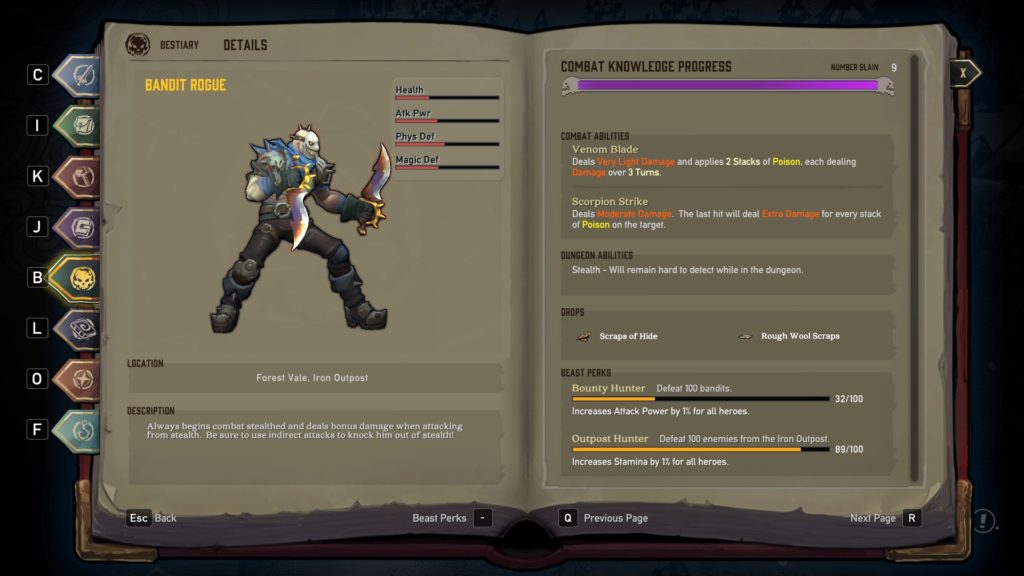 Battle Chasers: Nightwar indeed lives up to the hype it’s generated since it came out of Kickstarter. The game is a visual treat and combat is fantastic! The game offers so much in terms of layers and mechanics that it’s a shame that not all of them are explained well and you have to take some time to just pause the game and read up on the manual. Game is a bit linear but the amount of things to do kind of makes up for it. If you’re a turn-based RPG fan, you’ll want to get your hands on this.

Battle Chasers: Nightwar comes out on October 4, 2017 for the PlayStation 4, XBox One, PC, and Mac. If you pre-purchase it on STEAM, you’ll also get a 10% discount!

Wanna see how the game plays? Check out our gameplay video of the first dungeon of the game!

Previous articleMore of the Same Mech Multiplayer Mayhem | Gundam Versus PS4 Review
Next articleOnce is not enough! The Irregular at Magic High School gets a 2nd Fan screening this October!

Battle Chasers: Nightwar Review | Worth Chasing AfterBattle Chasers: Nightwar is a game you'll want to play if you're a turn-based RPG fan. Beautiful Visuals, Combat is fantastic and has many layers to it, and there are plenty of things to do in-game. The only downside is that the game doesn't explain well the various mechanics it features which makes for a jarring experience when you have to check for explanations in the In-Game Game Manual.