The contender for the best Marvel film of 2017 is in!

The first Thor movie, which I am a big fan of personally, is probably not the favorite superhero origin story of most MCU fans. And I think we can all agree that Thor: The Dark World isn’t the best film that the Marvel Cinematic Universe has to offer. So how then do you make a third installment in a series that is not as universally praised (by fans and critics alike) as Marvel’s Iron Man and Captain America trilogies? Well the answer is, make Thor: Ragnarok.

Make no mistake, Thor: Ragnarok is very much a Marvel movie – in the best way possible. While it doesn’t stray too far from the MCU’s tried-and-tested formula, it dares to experiment in a lot of ways, creating a fresh take of a long-drawn franchise hero.

The film plays with the classic theme of “what it takes to be a hero” and puts a bit of a spin on it. In Thor: Ragnarok, Thor (Chris Hemsworth) loses his beloved hammer, Mjolnir, in an early battle with Hela (Cate Blanchett) the goddess of death. Overpowering him and his brother Loki (Tom Hiddleston), Hela displaces the two Asgardians to the distant realm of Sakaar, where gladiator battles occur on the whims of the planet’s eccentric ruler, the Grandmaster (Jeff Goldblum). There, Thor stumbles upon old friends and connects with new ones as he races back to Asgard before Hela lays waste to his beloved home.

The story is fairly straight-forward, as with most superhero flicks. Though what makes Thor: Ragnarok exceptional is the brilliant dialogue. Thor: Ragnarok is actually one of the more “talkie” Marvel movies to date, but the conversations are never boring. The characters talk in a funny and refreshing way, but they still manage to retain their personalities, a testament to the script writing skills of Eric Pearson, Craig Kyle and Christopher Yost.

Speaking of characters, the main cast is brilliant! Chris Hemsworth, as always, kills it as Thor, and fan-favorite Tom Hiddleston as Loki still does not disappoint. While they’ve always had a great dynamic in previous Thor movies, Ragnarok excels in showing their relationship as brothers; watching the movie, you really feel that Thor and Loki grew up together as bickering siblings. And Mark Ruffalo is again a great Bruce Banner. But his portrayal of the Hulk in this movie is even better, especially as Banner’s Hulk form is given much more character of its own–swinging from a unstoppable monster to a temperamental tantrum-filled child.

Ragnarok’s supporting cast is equally outstanding. Tessa Thompson is badass as Valkyrie, and Anthony Hopkins’ Odin showcases his acting range in the movie. But the highlight goes to Jeff Goldblum’s exuberant and entertaining Grandmaster; he essentially played himself in the movie (exaggerated ten-fold), but it works oh so deliciously well that you wouldn’t mind him doing so. It. Just. Works.

Yes, the characters are great, but what about the action? Well you have nothing to fear, as Thor: Ragnarok contains lots of dazzling action scenes. The action is bright, colorful, and creatively shot; and it never overstays its welcome (which tends to happen in a lot of superhero movies lately). Supporting the fight scenes is the movie’s great 80’s inspired soundtrack, filled with synths that were taken straight out of the era’s video games. The trailer’s main anthem, Immigrant Song by Led Zeppelin weaves its way at just the right moments. Watch out for key action sequences where this is played, I swear it felt like watching classical paintings come to life!

While you may think that the colorful palette and awesome soundtrack might be an influence of Marvel’s mega-hit Guardians of the Galaxy, it’s unfair to say that Ragnarok copied GotG’s formula, as it’s very much its own movie. Though what it does share with Guardians is that it’s a director’s movie; you can feel that Thor: Ragnarok is director Taika Waititi’s vision much like how Guardians is James Gunn’s. If you’ve ever watched a movie by Taika (such as the superbly funny What We Do In The Shadows), you won’t be disappointed with Ragnarok.

So far, I’ve been heaping praise on Thor: Ragnarok, but it’s not a perfect movie. For one, the main antagonist Hela could have used more development. She’s not a forgettable villain though, as Cate Blanchett’s performance was excellent; she made a bigger mark as a character compared to Thor 2’s fairly forgettable Malekith. There’s also the fact that the movie took a bit of time to get the ball rolling, and you could’ve cut out some fan service-y scenes without affecting the story much (even when it involves another Avenger, hint hint). Overall, the movie’s strong points still easily overshadow these slight missteps.

While Thor: Ragnarok takes place in far-away places such as Asgard and the planet Sakaar, it’s still very much a part of Marvel’s movie universe. The story itself may stand alone, but there are tons of connections to the previous movies, and it sets up Infinity War quite nicely (we won’t go into specifis). Just be sure to stay until the end of the credits, as there are two post-credits scenes here like most other Marvel flicks. 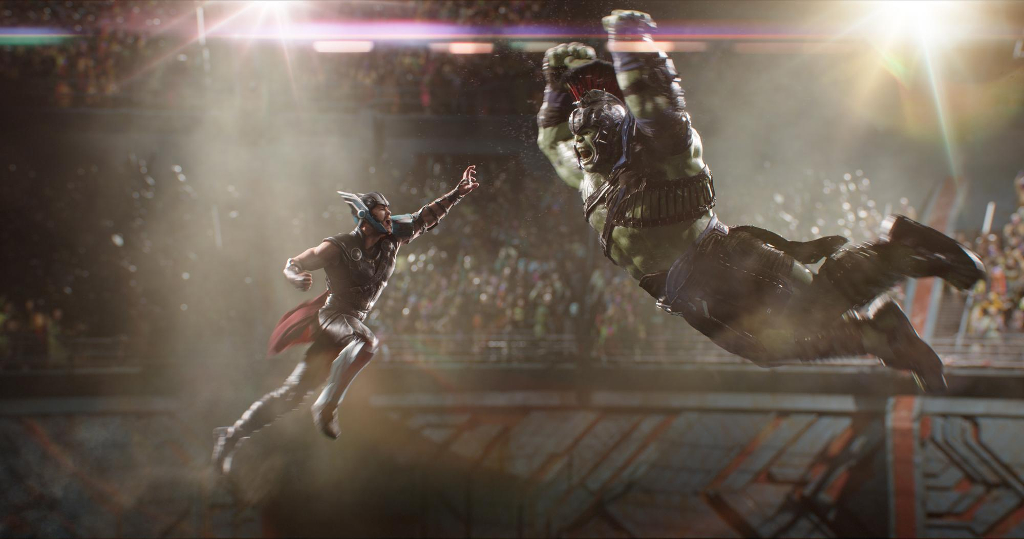 To end, Thor: Ragnarok is the most daring Marvel movie since the first Guardians of the Galaxy. It dares to play around with the Marvel formula through creative dialogue, colorful action, and a soundtrack that’s taken straight out of the 80’s. But it does these things in a way that still follows what made the MCU so successful. Ragnarok may not be the perfect Marvel flick, but for me, it’s the best MCU movie released this 2017, and a must-watch in theaters!