Call of Duty WWII Review | The Refresh that the Franchise Needed!

Boots on the ground! 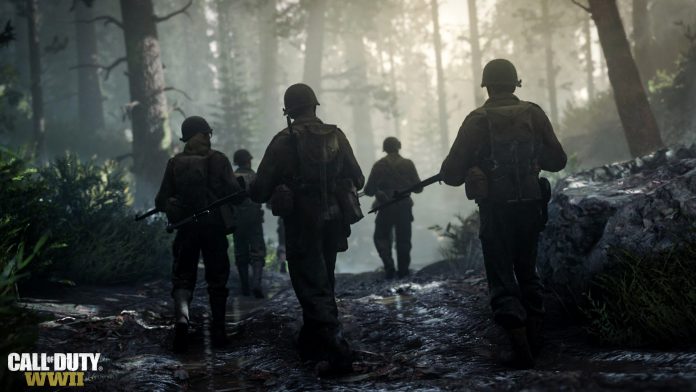 The Call of Duty franchise has been on a rocky road as of late, with both of their most recent installments not performing as well as they’d hope it would have. Even the likes of Kevin Spacey and Kit Harrington could not save Advanced and Infinite Warfare, and it was not hard to see why. With Sledgehammer back at the helm for this latest installment, can Call of Duty: WWII rise up from the ashes and bring the franchise back to its former glory? Find out in our review of Call of Duty: WWII!

Call of Duty: WWII is exactly what the title says it is, a return to the World War II setting, and honestly I don’t know what it is about it but there’s something about the war that just feels so grounded and relatable that it makes for great games. With that said, the latest installment in the long running franchise is a spectacular outing and this time around, Sledgehammer games have found a good mix that will make long time fans rejoice. Hey, it even got me playing again and while Modern Warfare 2 will always top my list, WWII doesn’t disappoint. From the opening cinematic to level selection, each tiny detail, like the black and white movie reel-like storytelling, has been polished to near perfection, treating players to an overall experience that feels like an awesome World War 2 immersion session.

The World War II setting has been depicted a million times over, from Saving Private Ryan to Band of Brothers to Dunkirk, with each format having a story to tell. WWII focuses on a group from the 1st Division and the best way that I can really put it is that it feels new AND old at the same time. There is so much to appreciate this time around and when Joe Salud, the art director for Sledgehammer games, told us that the research done for the game was really painstaking, it was not an exaggeration. Each setting does its best to evoke emotion out of you, whether you’re traversing the trenches and bunkers or walking through a war torn village, you see the amount of detail put the world that brings the theater of war to life. Sure it’s something we’ve all seen before and those trenches and bunkers won’t look or feel different anytime soon, but it’s good to know that WWII remains faithful to source material.

Minor quirk, and it may just be me but for all the detail given to the graphics, I feel that the sound department took quite a hit. Don’t get me wrong, each firearm and explosion sound great, it just lacks that certain kick that just wraps things up nicely. This is a minor thing to be honest, but for something that requires a certain level of aural and visual quality to pull off right, it left me wanting a wee bit more.

A big change to the gameplay is the fact that health packs are back. The design decision to bring health packs back is a sound one, as Sledgehammer really wanted to create a level progression that was more tactical and deliberate but also allowing the player to feel vulnerable, reinforcing the squad mechanic a bit more, which we’ll get to in a bit. You don’t regenerate health and this makes for tension filled moments where you’ll really want to take time going through the game. I personally love this change, and although I did die a total of 5 times before getting out of that beach scene (even on normal difficulty!) just because of all the chip damage I was taking, I got used to it pretty easily. You’ll want to stick to cover, maybe more times than you’d like, but isn’t that how it really was back then?

Another welcome addition is the introduction of squad abilities, which allow you to trigger certain perks (health pack refill, ammo refill, etc) once you’ve filled up a meter. Once again we return to that point where Sledgehammer takes a realistic squad behavior and translates it in game. I love the fact that you’re not a super soldier anymore and that you’ll need legit help from your squad to make it through a level and while I equally hate the fact that you can’t trigger these abilities from afar, forcing you to stick together which is nearly impossible in the middle of a big firefight.

While the single player campaign, which will take you anywhere from maybe 6-10 hours, is one of the shortest in recent Call of Duty history, online multiplayer is a gift that keeps on giving. You’re thrust into a playable lobby called the Headquarters and true to the aim of Sledgehammer in bringing the total “war experience”, the headquarters looks and feels like a barracks of sorts where you can interact with fellow players, enjoy 1on1 gunfights, and much more. It’s a nice touch and adds a very social aspect to things such as watching ongoing 1on1 matches and opening lootboxes in front of other players. The guys at Sledgehammer knows how our competitive nature works and uses that motivation to full effect as you’re always conscious of your ranking as compared to other players, prompting you to keep on working to get that next rank. Hey, you’re only as good as you are shiny right? Call of Duty: WWII has a LOT of shiny things for you to show off and collect, which makes the urge to show it off that much more powerful.

Classic multiplayer modes like Team Deathmatch and Domination are back, among other modes, but arguably the biggest addition will be that of Divisions. Simply put, Divisions are specific “groups” or classes that you join and it caters to your preferred style of play. Want to hang back and camp your way to victory? You’ll want to be part of the Mountain division, which has perks like being invisible to enemy recon aircrafts or silent movement, allowing you to maximize your sniping skills to the fullest. Are you an up close and personal type of player? Well the Expeditionary division allows you to wield a shotgun with incendiary ammo! Divisions will allow players to naturally gravitate to their personal style of play while not restricting them to it, since they’ll be able to equip other weapons as well, meaning you are not limited to your specialty.

Zombies make a return to Call of Duty: WWII and this time, we’re exterminating Nazi Zombies! I mean seriously, what is it with First Person Shooters and Nazi’s these days? The tried and tested formula returns for this installment and it’s better and more frenetic than ever. You earn “Jolts” as you kill zombies and you’ll be using this currency to either open doors that lead deeper into the campaign or purchase upgraded weapons and powerups to help you fight back harder. This mode is tough and the level design is pretty interesting, making sure that somehow you and your squad get separated at one point in the journey just because of all the running around you’ll be doing from the waves of zombies coming your way. The more you play, the more you get to unlock customization options that will help you and your team go deeper than you did last run. It’s an addicting cycle and has that “one more run” factor going for it which does wonders from a replay standpoint.

The Call of Duty franchise desperately needed this refresh and Sledgehammer totally killed it with WWII. The war is well depicted in this installment and the design changes made to accompany it fully realizes the vision of brotherhood and camaraderie. Multiplayer is no slouch and Nazi Zombies is a fresh take on an old mode that rounds up WWII as one of the best Call of Duty games in recent history.

Call of Duty: WWII is now available for the Sony Playstation 4, Xbox One, and PC!

The Call of Duty franchise desperately needed this refresh and Sledgehammer totally killed it with WWII. The war is well depicted in this installment and the design changes made to accompany it fully realizes the vision of brotherhood and camaraderie. Multiplayer is no slouch and Nazi Zombies is a fresh take on an old mode that rounds up WWII as one of the best Call of Duty games in recent history.Call of Duty WWII Review | The Refresh that the Franchise Needed!