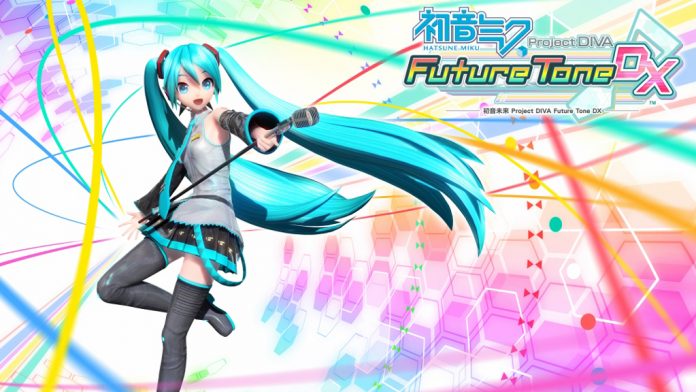 Hatsune Miku celebrated her 10th anniversary this year, and Sega is commemorating the momentous event in a grand fashion – with the upcoming release of the Project Diva Future Tone DX rhythm game on the PS4!
With over 200 songs and almost 400 costumes, Project Diva Future Tone DX is probably the ultimate Vocaloid experience as of yet! The game contains the massive Future Sound and Colorful Tune add-on packs from the previous Future Tone game, and also includes another 3 game packs. That’s pretty much the entire Project Diva library and more!
Future Tone DX will be bringing back the rhythm game mechanics from previous Project Diva games, so expect a huge selection of your favorite button-pressing songs ranging from slow melodies like Sakura no Ame to hyper pop tunes like Ageage Again. To further sweeten the deal, the ultra-popular song Ghost Rule by DECO*27 will be included!
Miku’s costume modules will be customizeable, so not only can you dress her up in her signature colorful outfits but also change her hairstyle and accessories to your liking! And since it’s Miku’s 10th anniversary, the game will come with the “Celebration” costume module to… well, celebrate Miku’s grand anniversary!
A new feature that will be included for Future Tone DX is the PV Photograph. Now you can take snapshots of your favorite scenes from the music videos, adjust the size, and add your personal flair using stamps and accents. Show your love for Miku and her friends!
Hatsune Miku Project Diva Future Tone DX is definitely a game that I would recommend, not only for Vocaloid lovers but to everyone! With adorable costumes, an easy-to-learn yet challenging gameplay, and an epic J-pop music playlist for the ages, Future Tone DX is certainly the best way to celebrate Miku and usher in a new era of Vocaloid!
- Advertisement -
Previous articleSEGA Will Reveal New ‘Valkyria Project’ Next Week!
Next articleCan’t wait ’til the weekend? Get your Justice League fix with these Midnight Screening Schedules!