Celebrating the magic of friendship the fun run way! A look at the My Little Pony Friendship Run Manila 2018

The magic of friendship gets physical! 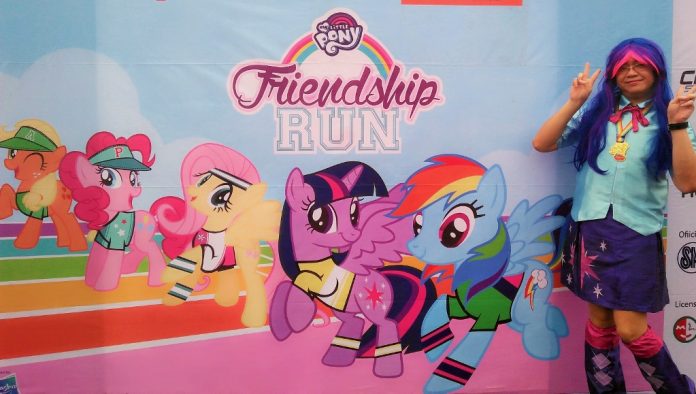 Rainy days and Saturdays deserve a few more minutes in bed, but January 27, 2018 started on a more colorful and energetic note for many with the My Little Pony Friendship Run Manila! The MLP-themed run event took place at SM By The Bay, and being your resident brony cosplayer I just had to stop by and see for myself! How was the event? Let’s find out!

Friday night was cold and dreary, and rain was in the forecast. Fortunately (or maybe by magic?), the Friendship Run was granted a respite and saw only a slight drizzle, so the excited fans and runners weren’t drenched in the rain!

The race route itself was normal and par for the course. There was a 500m, 1k, 3k, and 5k division, and while the main gathering area had My Little Pony standees and posters, the race course itself didn’t have banners or streamers throughout. However, the appearance of the Mane 6 made up for it as they led each group and also posed for pictures along the way!

The attendees were also treated to a lot of fun after the race! The organizers raffled off a lot of MLP merch like plushies and backpacks, and even gave away 3 Devant HiSense 32-inch TVs! There was even a kids’ costume contest, and Pinkie Pie won the crowd over!

But the mane event was when Twilight Sparkle and her friends came up on stage and entertained the crowd to the tune of “We’ve Got This Together”, “Cafeteria Song” (from Equestria Girls), and “Baby Shark” (yes, Baby Shark).

Attendees also came wearing their best tribute of My Little Pony characters! There were a lot of tutus, colored wigs, and Mcdonald’s Happy Meal masks throughout. Too bad I didn’t find anyone else wearing an Equestria Girls cosplay during the event – but still, Canterlot High represent! 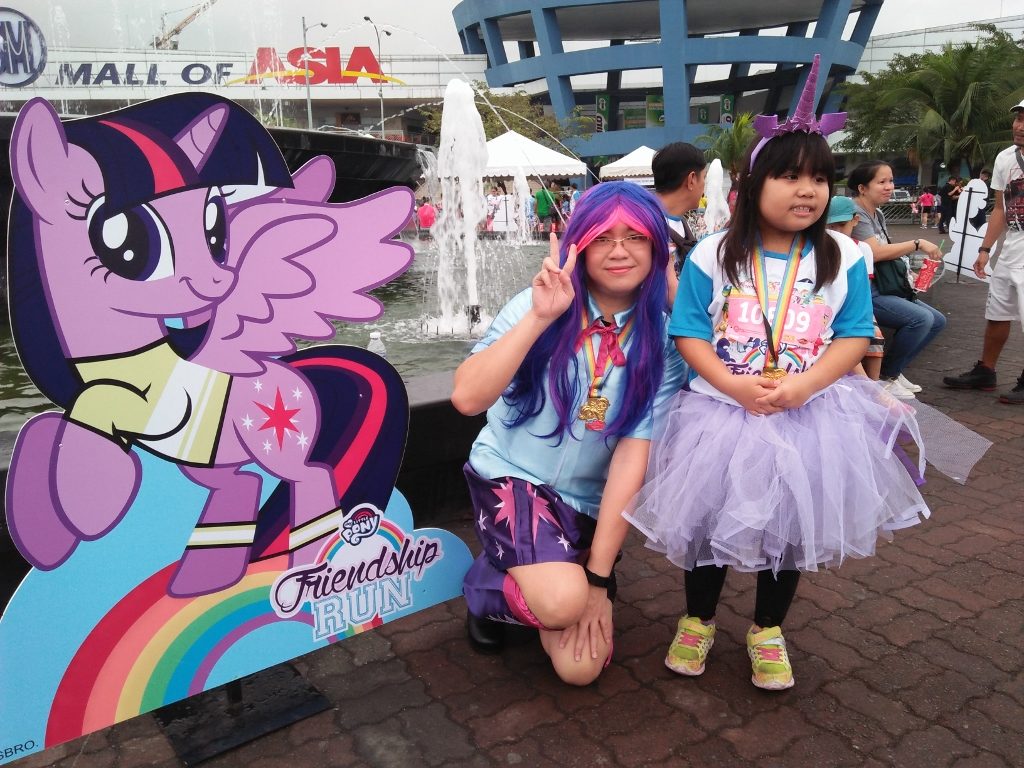 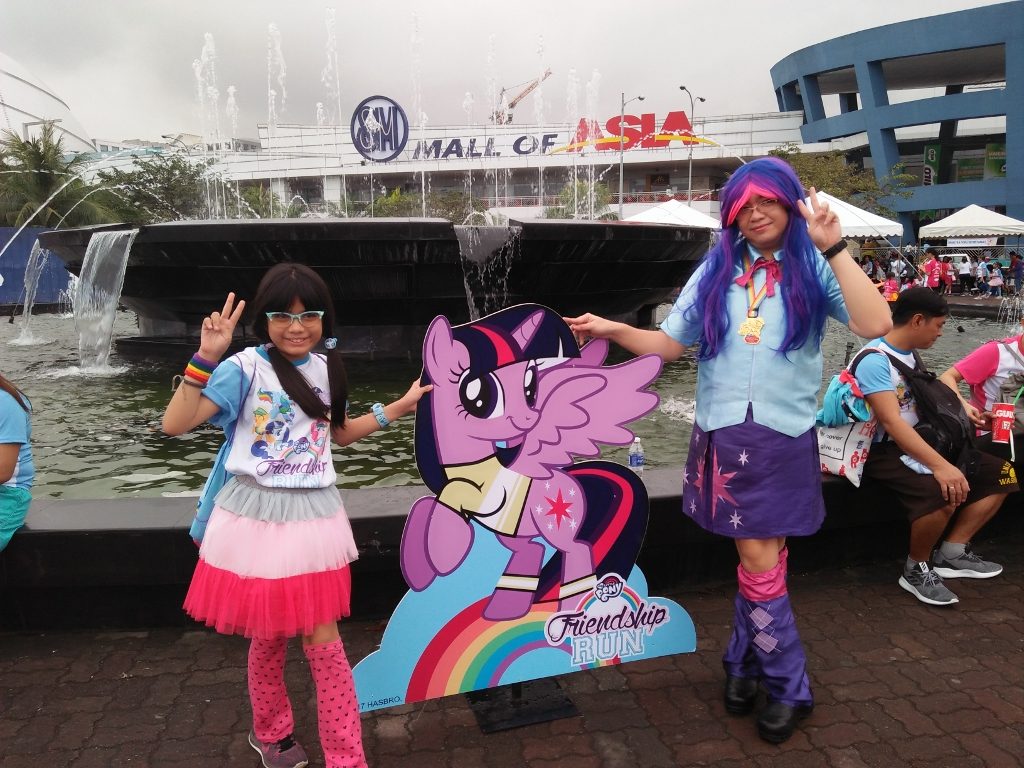 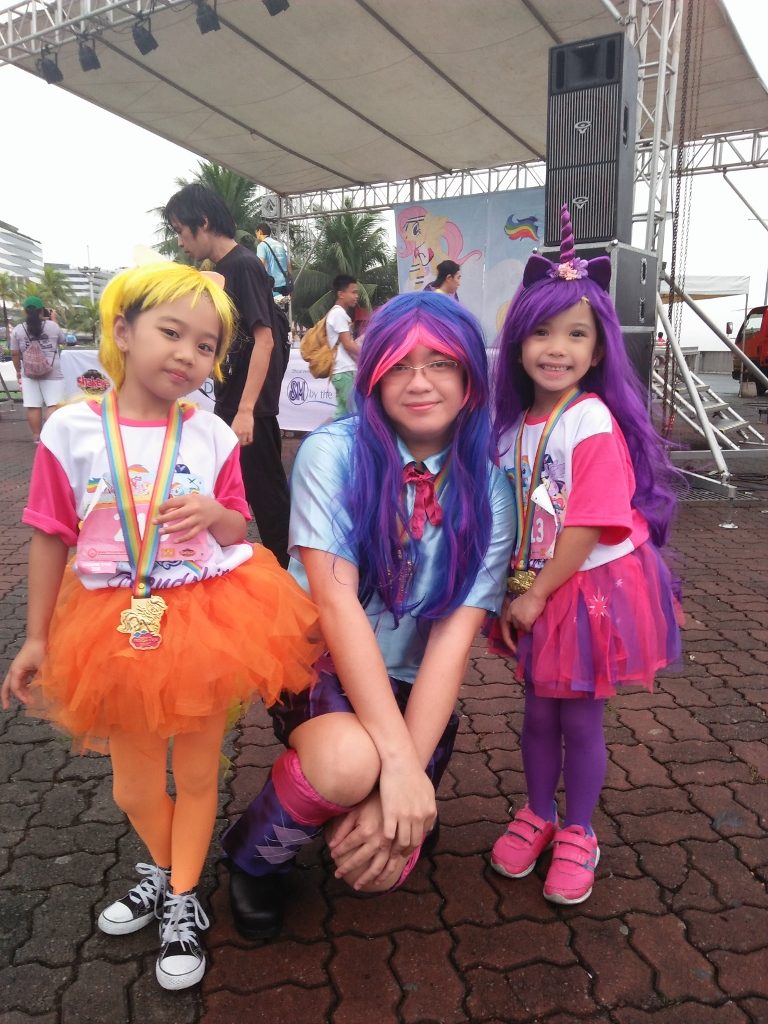 Toy Kingdom, one of the event sponsors, also had a booth with pony merch for grabs! Plushies, My Little Pony: The Movie toys, and even floor mats were up for sale, and made for a perfect way to complement the experience.

Registered attendees also received a swag bag that any brony or pegasister must have! Included are a Friendship Run drawstring bag, an event singlet that came in pink or blue, a rainbow-colored wristband, some colored hair extensions, and a race map. Finishers also received a gold Rainbow Dash medal to mark their achievement, making the giveaways 20% cooler!

All in all, My Little Pony Friendship Run Manila was a fun and entertaining start to the weekend. While the race itself was normal and average, the post-race events made the drab Saturday morning brighter! Hopefully the next MLP event will be even bigger and better, from the weather and the banquet to the style and the music!