Non-Spoiler Review: ‘Jumanji: Welcome to the Jungle’ is JUST AS AWESOME as the Original!

Blew away all my expectations! 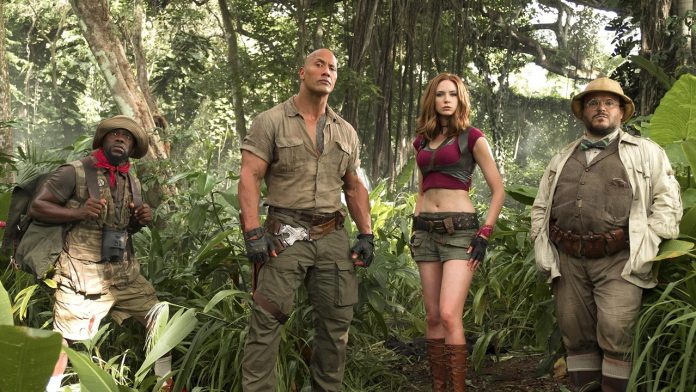 Jumanji has always held a special place in my heart as a fun movie that in enjoyed back in my childhood. I remember it to be a movie that sorta scared me (it was them drums, man!), made me laugh, gave me feels, and more. Add to the fact that it was one of the movies that I remember Robin Williams for, this made Jumanji somewhat sacred for me.

And then, I heard that a new Jumanji movie was coming and, I have to admit, I frowned at the idea. I honestly thought that it was just another cash-grab by making a sequel to a title that, in my mind, should’ve just been left alone.

Yeah, cool as it was the trailers didn’t do anything for me. I had a judgment so firmly set in my mind that I just knew it wasn’t gonna fly. And then I watched it for myself. And, by God, I couldn’t have been more wrong. Now, I can’t help but RECOMMEND that you watch ‘Jumanji: Welcome to the Jungle’ and I’ll break down why.

‘Jumanji: Welcome to the Jungle’ is a story of self-discovery. Akin to how the original movie was, it’s a tale of a bunch of people going into the game to face challenges that end up making them learn how to be better versions of themselves. The premise was okay. Nothing groundbreaking and nothing you wouldn’t expect out of Jumanji. But it’s in the execution that sells it. 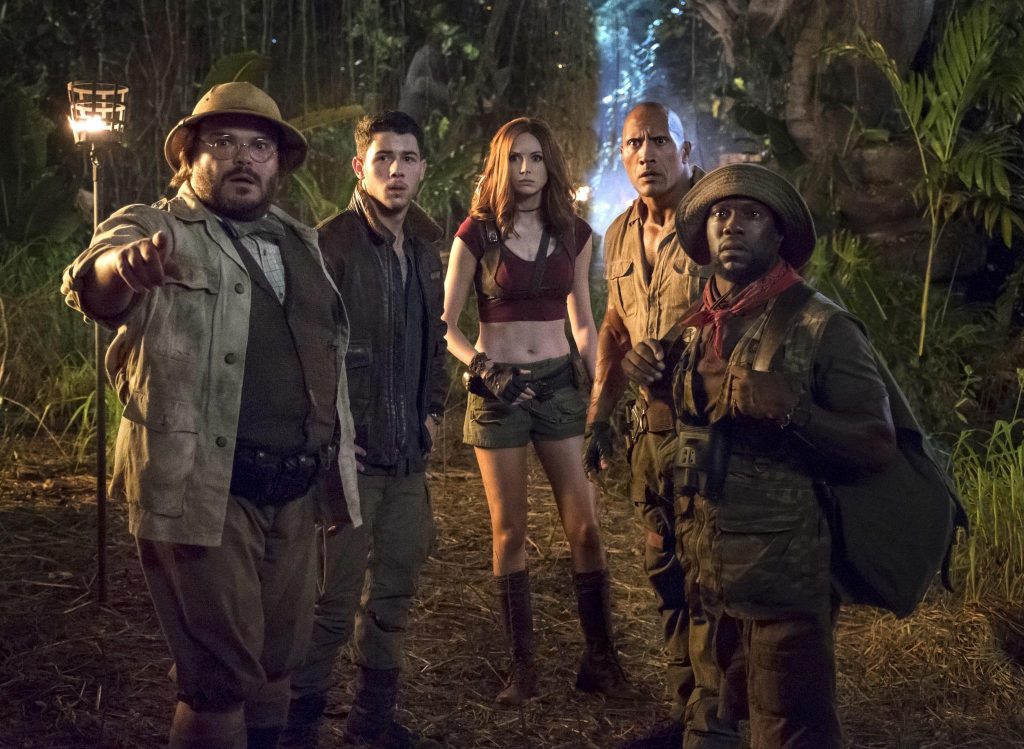 So basically, Jumanji evolved (due to the changing times, I guess) from a boardgame into a video game. This made it appealing to play for the first victim and thus the story begins. If you’re into video games like me, you’ll LOVE the references they make because they did, in fact, take note of the nuances of how the game would adapt to being a video game. Each player now has 3 lives until they permanently die in the game. Aside from that, they also reference things like NPCs (Non-Player Characters) and Cutscenes which they do so with hilarious accuracy. It’s simple yet they’re such fun things to encounter in the movie especially if you’re a gamer. Don’t worry though, all you non-video gamers out there. The movie doesn’t go too much into it in a way that estranges people who don’t game.

Then you have your cast… who just work SO WELL TOGETHER. Okay, just to get you guys up to speed, (no, this isn’t a spoiler as this was shown in the trailer) 4 kids find the Jumanji game and, as soon as they get into the game, they transform into the game characters they picked. You have a nerdy kid who becomes The Rock aka the Main Hero, the jock becomes Kevin Hart aka the sidekick, the reserved outcast girl turns into the femme fatale Karen Gillan, and the pretty and pretty self-conscious girl turns into the wise (and amazingly funny) Jack Black. 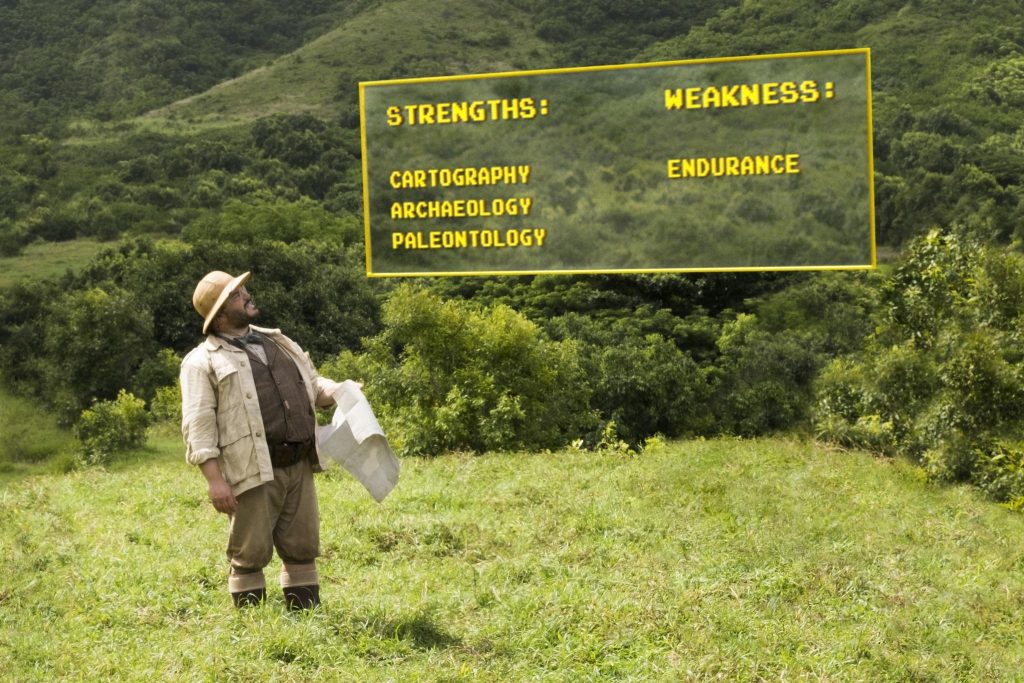 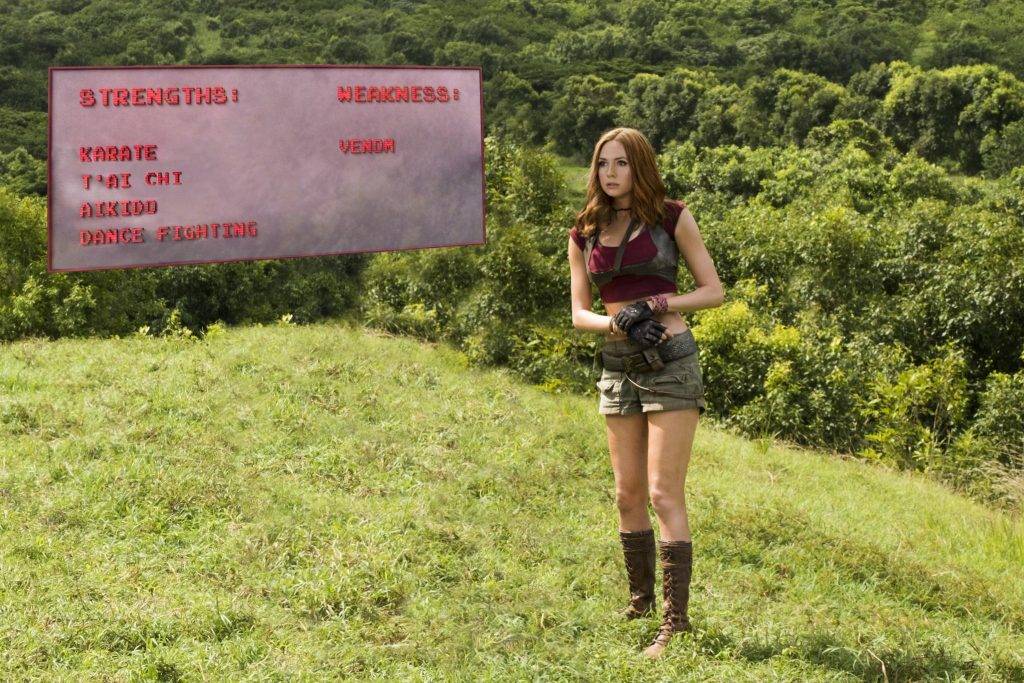 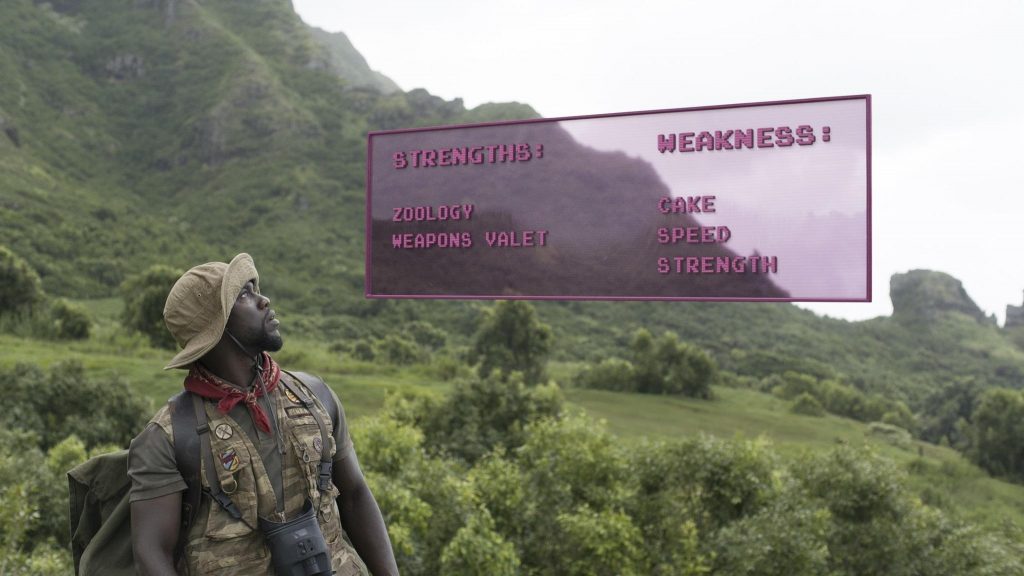 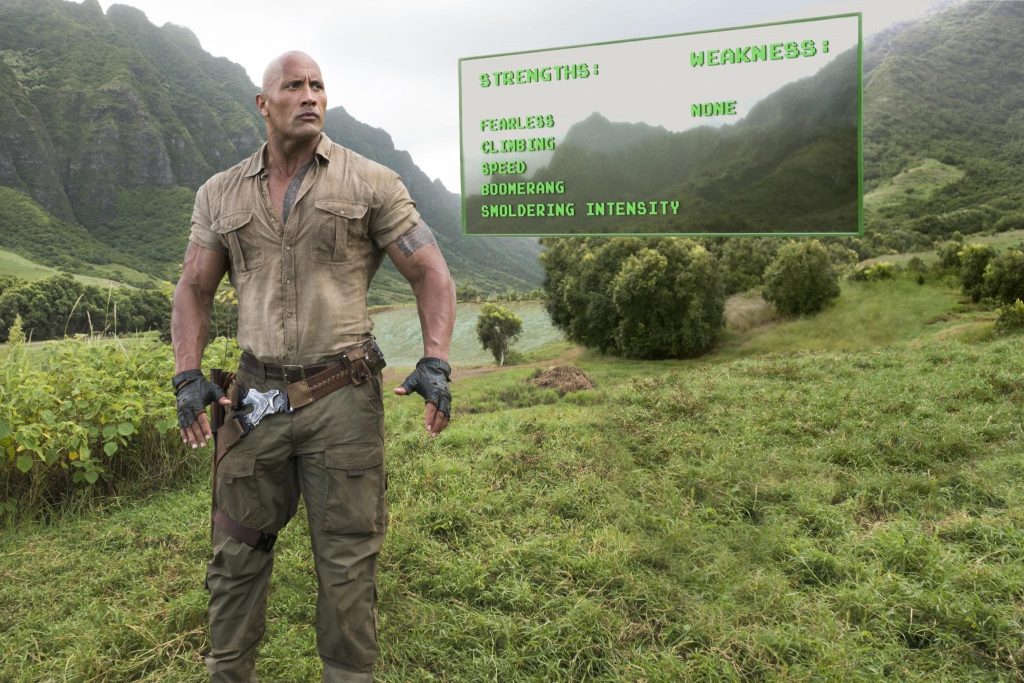 Seriously, each actor / actress pulled their weight in this movie and played a HUGE part in the success of this film. The Rock does well in bringing the action to the film. I gotta say that I like that bit of self-doubt he gets to portray on his character. It’s a believable reaction to someone who viewed themselves as weak and suddenly got the power and spotlight all on them. Kevin Hart is hilarious AND sells the reverse (jock becoming weak) quite well. Karen Gillan does so much as well. As the only other “fighter” in the group, she does a fantastic job in the fights of the movie as well as add sizzle to scenes with her sexy-but-uncertain demeanor. Then you have the amazing Jack Black who is never failed to make me laugh and WITHOUT QUESTION makes an excellent portrayal of the pretty yet self-absorbed teen. THE REAL MAGIC however happens with how each of them interact with each other. They each have really good comedic timing and their synergy is a sight to behold. 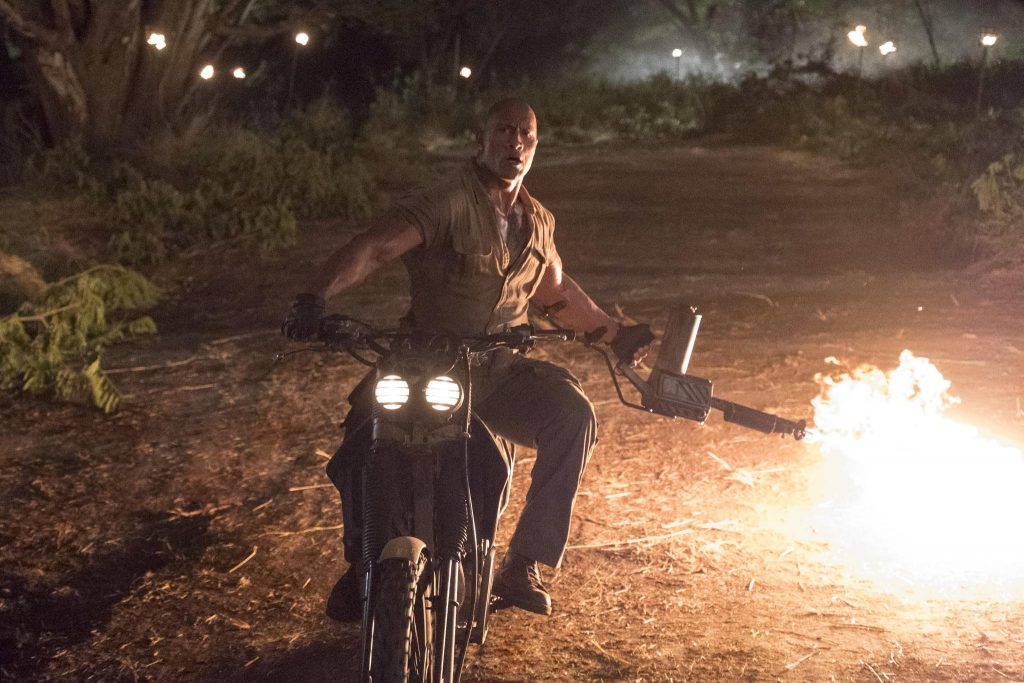 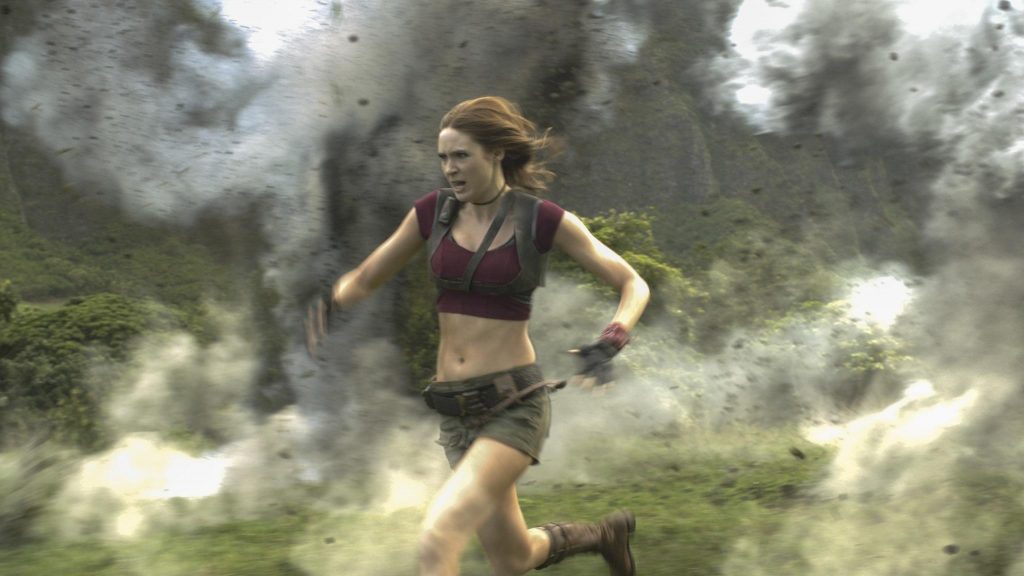 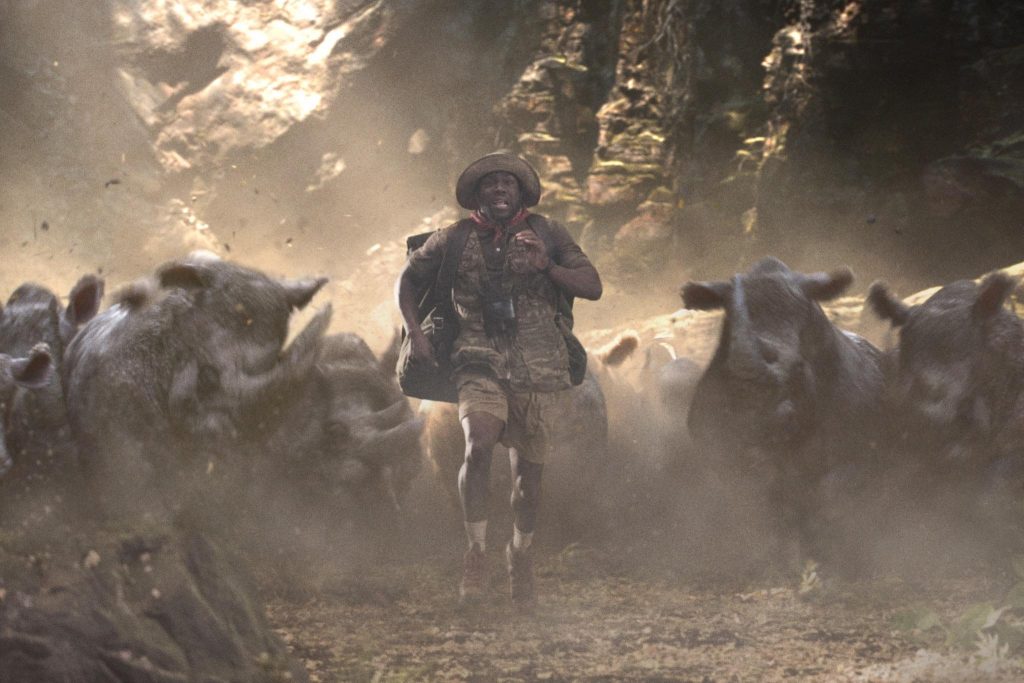 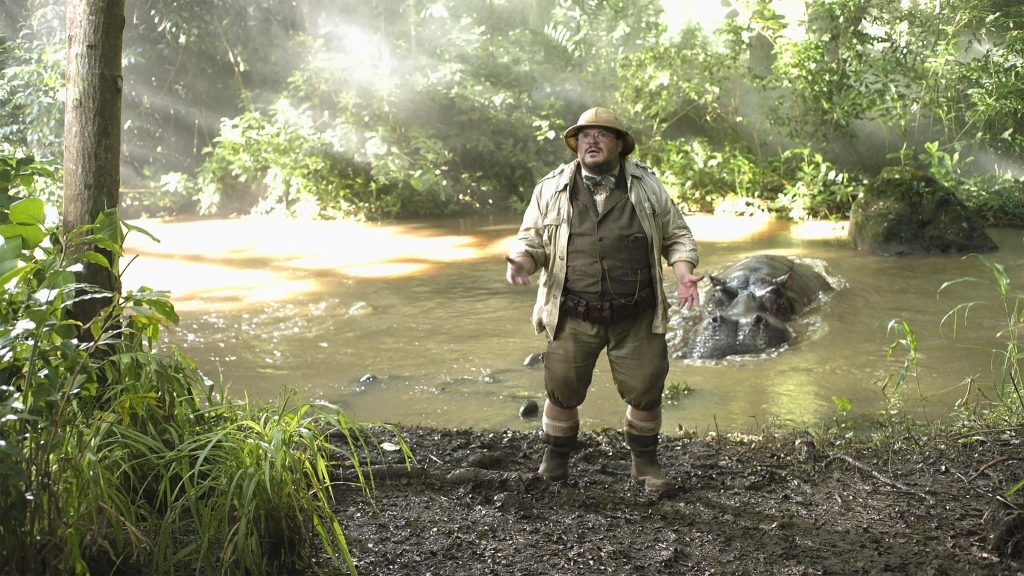 Overall, the movie was a pleasure to watch. It holds true to the spirit of the original film. Jumanji: Welcome to the Jungle manages to strike that balance of humor, feels, and dread. I was not bored for a single second when watching this and I’m happy to report that all of my negative judgments towards this movie were all blown away after watching it. It’s not perfect but it’s a movie that’s definitely worth watching as you’ll treat yourselves to an amazingly fun adventure.

If you still have any reservations or negative judgments towards the movie then, by all means, keep them. As long as reading this review makes you SOMEHOW consider watching the movie, then that’s good enough for me because I’m pretty sure you’ll have a similar experience as I did and be pleasantly surprised to realize that you were wrong.

Previous articleGodzilla Anime Film To Stream on Netflix Starting January 17!
Next articlePhp 7595 worth of freebies for an almost 12k phone?!!! Sign me up! All hail the new Battery King!

Non-Spoiler Review: 'Jumanji: Welcome to the Jungle' is JUST AS AWESOME as the Original!While the movie was met with a lot of negative judgments upon announcement, Jumanji: Welcome to the Jungle blows all those away by providing you with a film that stays true to the spirit of the original. The stellar casting also does so much for the movie. All-in-all, this movie effectively gives you a fun-filled humorous adventure with just the right amounts of direness. Definitely a must-watch especially if you have watched the original and/or a video game geek because Gaming References.