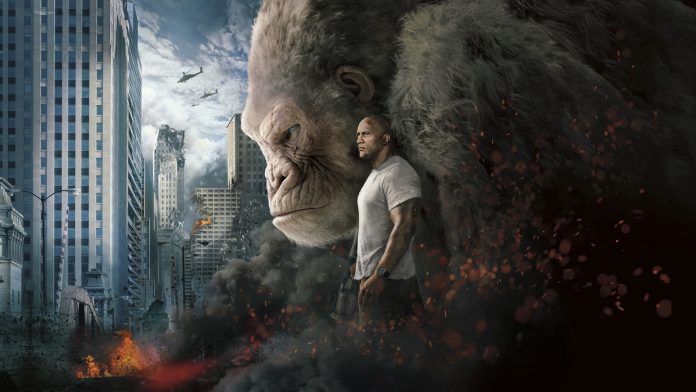 Dwayne ‘The Rock’ Johnson is back on the big screen with another action packed movie! From the director of San Andreas and Journey 2: The Mysterious Island comes another larger-than-life adventure that requires our favorite comedic action star to exhibit his skills, strength, humor, and charm. Is this movie worth watching? Here’s our non-spoiler review of RAMPAGE!

Honestly, when I first saw the trailer, it reminded me of other big monster movies like Godzilla and King Kong. But having 3 big monsters in a movie?! That really caught my attention, and well, of course because ‘The Rock’ is there.

The story mainly revolves around Primatologist and head of anti-poaching unit, Davis Okoye (Dwayne Johnson) and his gentle and humorous albino gorilla friend George. As mentioned in the trailers, Davis rescued George when he was 2 years old.

Trouble brews when a science experiment that fell down from the sky mutated George and two other wild predators into massive and aggressive beasts. With the help of Dr. Kate Caldwell and Agent Harvey Russell, he is on a mission to save his best friend George and stop the wolf named Ralph and the alligator named Lizzie from destroying the city.

The movie is really great and exciting! You’ll definitely be at the edge of your seat! As an animal lover or even just a movie goer, you’ll have so much feels for George. Every time he’s being hit throughout the movie, I must admit that I got emotional to the point where I had to yell “No! George!” inside the cinema (so embarrassing).

This movie is based from an arcade game by Midway Games with the same name released in 1986. The game can be played with three players simultaneously where you can choose from the three protagonists: George the gorilla, Ralph the wolf, and Lizzie the dinosaur-like creature. In the game, you’ll have to raze and destroy all high-rise buildings in the city to continue on the next level.

The visual effects and overall look of the movie was simply breathtaking. You’ll feel the intensity of every scene. It made me wonder at how well these massive monsters were done and portrayed

Dwayne Johnson did a great job with his role as Davis Okoye in this movie. We were able to see the Rock as we have always loved him to be. His character was really cool, charming, and humorous. Truly, he’s perfect for any adventure movie with a hint of comedy.

Dr. Kate Caldwell, starred by Naomie Harris, was an awesome supporting character. I was hoping a bit for a love interest angle that might’ve developed between her and Davis but there was none. She did stay true to her character’s motivation and showed her drive to bring justice to what happened to her brother!

Agent Harvey Russell played by Jeffrey Dean Morgan was also a delight to watch. I loved his really cool and bad boy cowboy vibe that he brought to the picture. At first, I did see it as overconfidence when he was introduced in the movie but I loved the character development he went through.

And of course, George! I love him more than anyone in this movie! You’ll definitely feel for him as he was amazingly funny, protective, lovable, and gentle.

As much as I really enjoyed watching this movie, it didn’t give the element of surprise. Yes, the action parts of the movie pulled me at the edge of my seat, but still everything was predictable. This movie is not that different from Godzilla and King Kong but it is still something you can enjoy watching with family.

Do I recommend it? Yes, it’s worth watching if you just want to chill.

Previous article
God of War (2018) Review | A Franchise Reborn for the Better!
Next article
Take a Look at This BlazBlue: Cross Tag Battle Collector’s Edition

A retro arcade game adapted into the big screen. Check out another Dwayne 'The Rock' Johnson movie that is packed with action-filled adventures and larger-than-life creatures. The three (3) massive monsters - George, Ralph, and Lizzie - will definitely overwhelm your eyes. The visuals are great but story is pretty predictable. Still a good watch if you just want to chill and enjoy with friends and family. Non-Spoiler Review | 'Rampage' Let's Go Berserk!