Hands on: Here comes your new challenger! A closer look at the ASUS ROG Phone

We get a more in-depth look at the First Gaming Smartphone from ASUS! 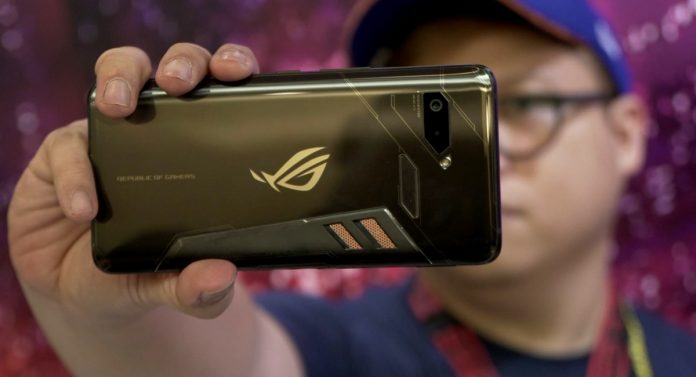 A new challenger is stepping into the ring, and he’s no mere contender. ASUS is finally flexing some gaming muscle for its smartphone line with the ROG Phone. Speculations and rumors have been high and we’ve been bugging the management of ASUS and ROG for about 2 years now on when the tech giant will finally launch a phone that has gamers front and center.

Finally, it seems, that time is now!

So ladies and gentlemen, without further ado, here’s a closer look at ASUS ROG Phone in all its glory: 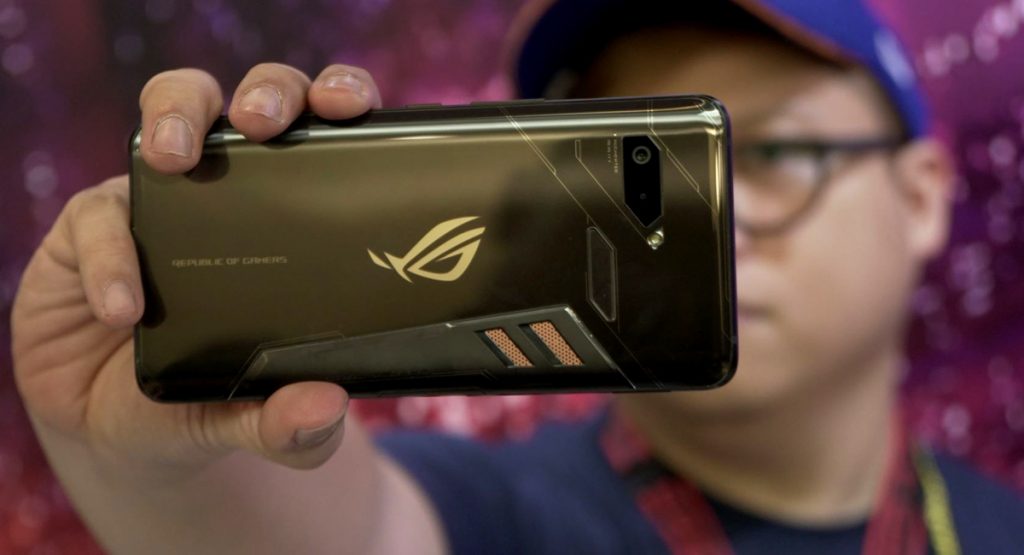 WHAT WE KNOW SO FAR

The ASUS ROG Phone is by far the most jampacked phone ASUS ever created as to date. It’s packed with the fastest Qualcomm Snapdragon 845 in the market clocked at 2.96Ghz, 8GB RAM, and storage of up to a giant-sized 512GB ROM.

If that’s not enough, we haven’t touched on the 6” of gorgeous AMOLED display with 90Hz refresh rate and a 1ms ultrapixel response time, so you’re assured of blur-free gaming and you can make every millisecond count.

With all this power, ASUS ROG found a way to optimize the unit further by including a 3D vapor-chamber that intelligently cools your internals making you game longer. 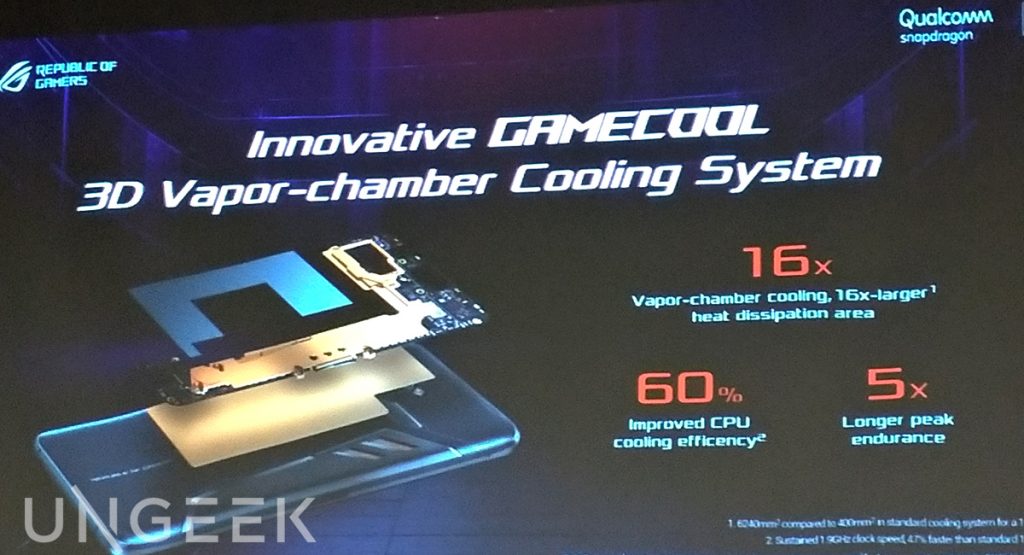 ASUS knows that to truly give justice for even having an ROG Gaming Phone, good hardware is only half of the equation; the next half is great usability. Good thing the ROG phone has an excellent form-factor, which can fit lots of cool accessories. 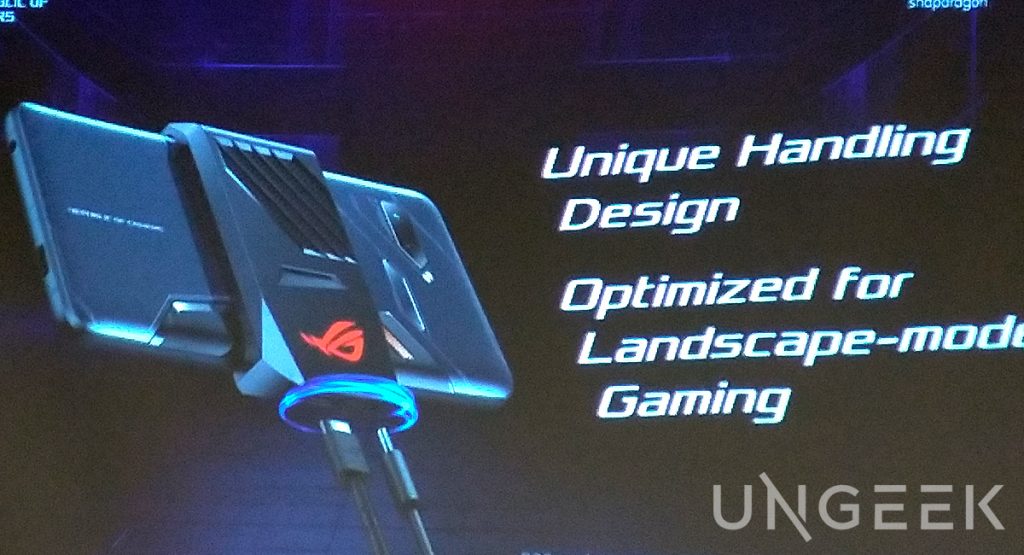 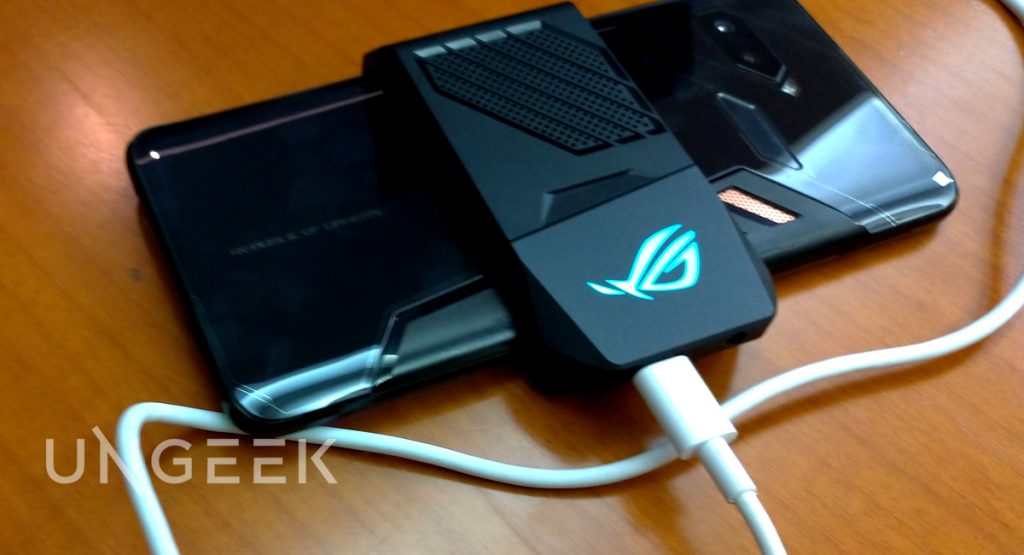 What the actual –! Yeahp, they were able to do it; and yes you can still charge your phone the normal way. ASUS ROG realized that since most mobile gamers want to keep their hands free of all obscurities (like a possible cord sticking out when you’re charging our phone), the ROG Phone supports an Aeroactive Cooler that lets you use headphones and charge your phone horizontally. Not to mention that it’ll keep your phone cool in intense gaming scenarios.

Here’s the kicker, and this is where user design and hardware specialization melds into one, because of a new design architecture and hardware calibration, the ASUS ROG Phone can charge your unit without adding to the overall heat of the unit. 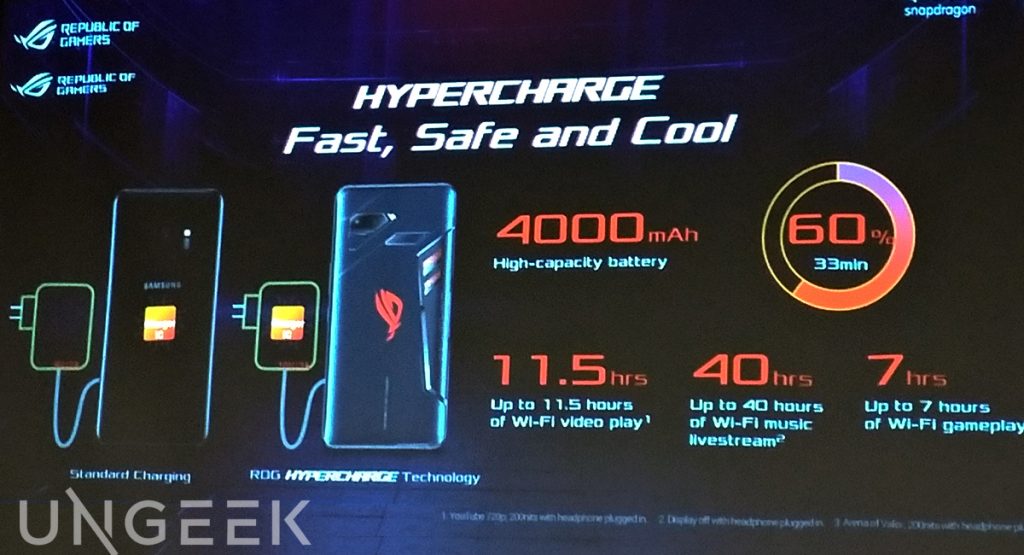 In some technical marvel, the guys and gals at ASUS were able to remove the charging plate away from the phone. Oh, and the ROG Phone is equipped with 4000mah battery giving you long-lasting game time before you recharge once again.

There’s also an optimized shoulder “air” trigger buttons that gives you more keys and commands keeping your gaming as distraction-free as possible. 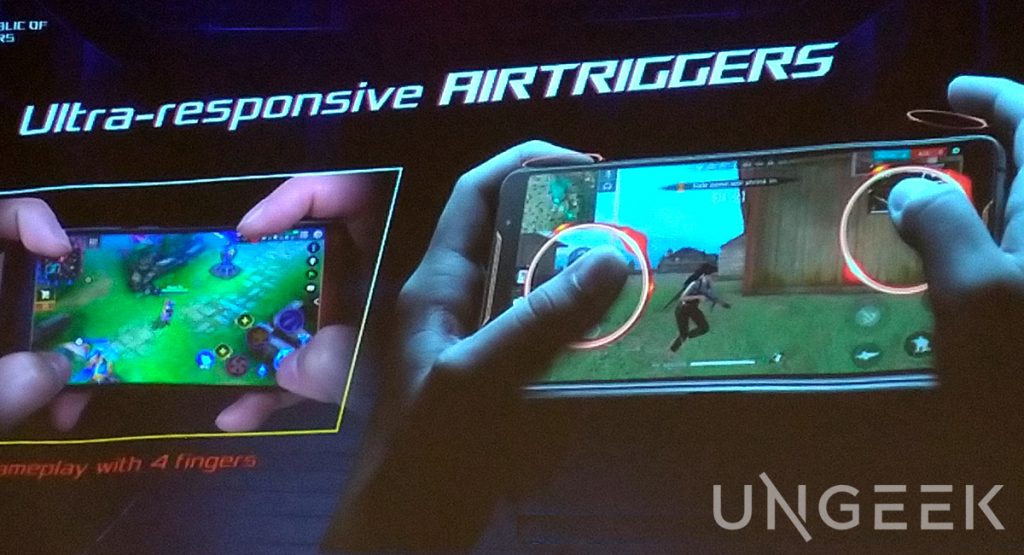 While not physical buttons per se, these touch or pressure sensitive buttons add another dimension to the unit. And if that’s not enough, squeezing the unit activates a particularly cool animation on your home screen and lights up the ROG logo at the back panel for some RGB party. 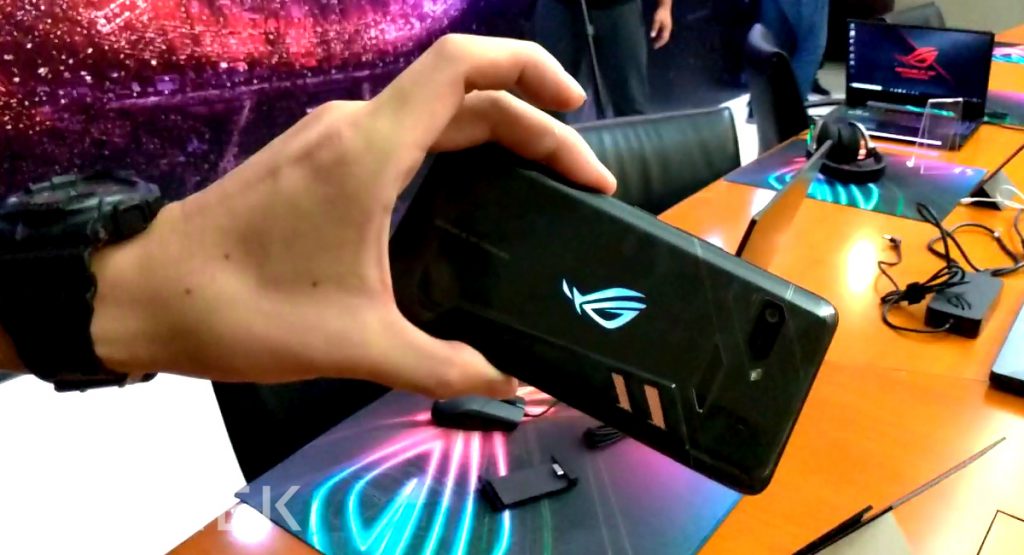 But instead of just stopping at some RGB lightshow, the prompt actually means that your phone is churning more power than usual because you need it to further maximize your gaming experience – sounds familiar? Doesn’t it sound like…overclocking of some nature? 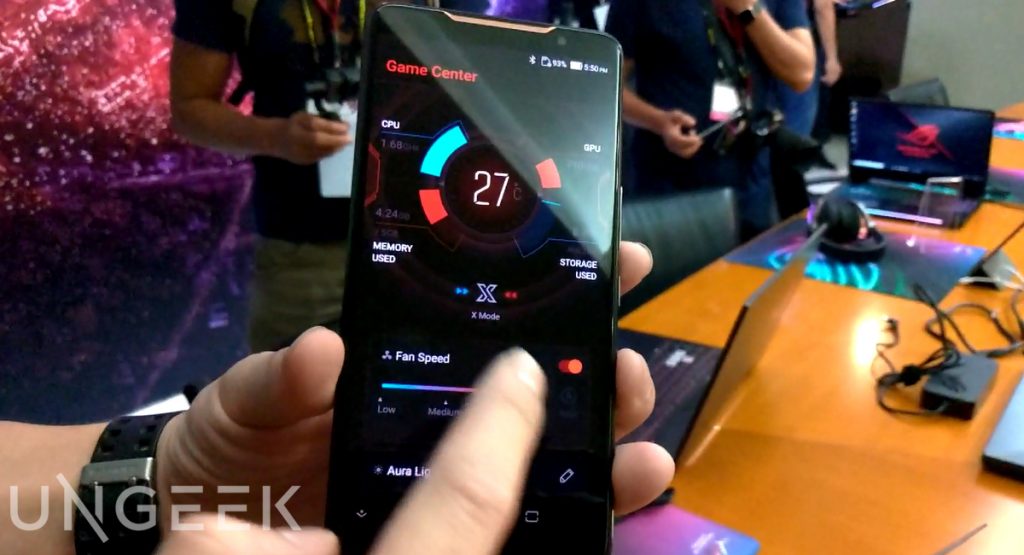 BOOM! And that’s one of the core aspects of the ROG phone, the ability the demand more from the unit with a “squeeze”.

And speaking of improved performance, here’s the ROG Phone’s score when compared to the rest of the other flagship and gaming devices. 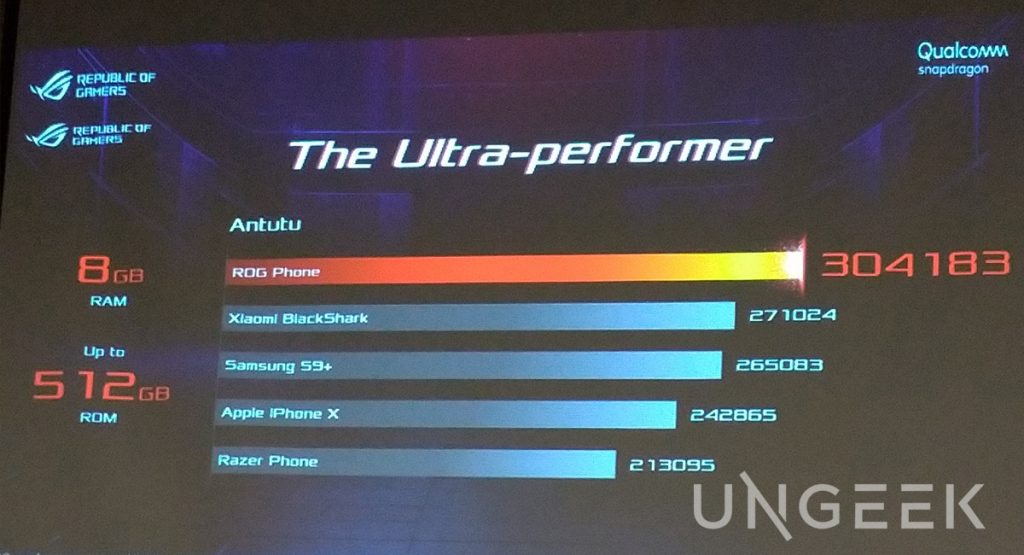 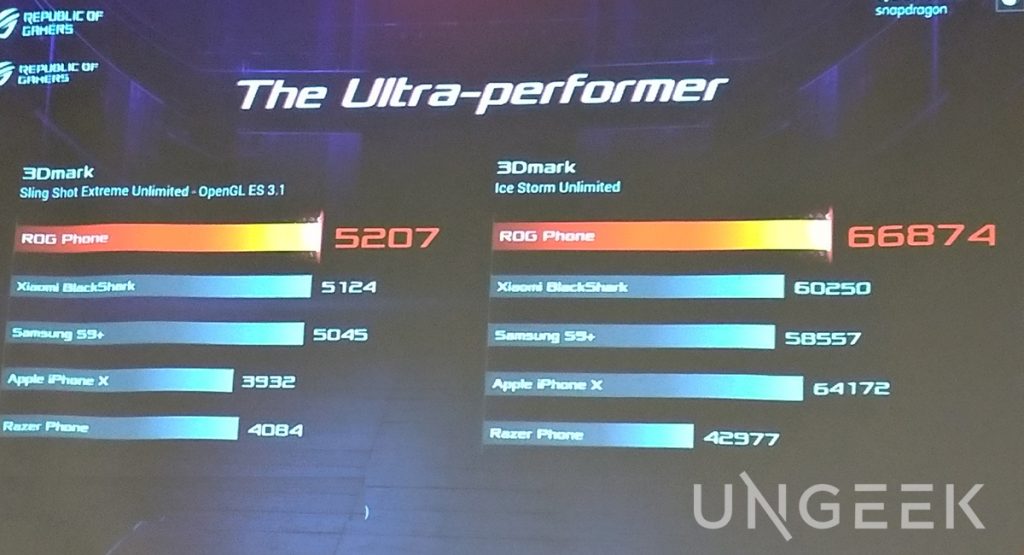 They new kid just made everyone look, well, bad. Wow. But it doesn’t end there. 😉

To truly maximize the capabilities of the ROG Phone, ASUS also will be releasing a series of quirky accessories that will transform how you view mobile gaming. 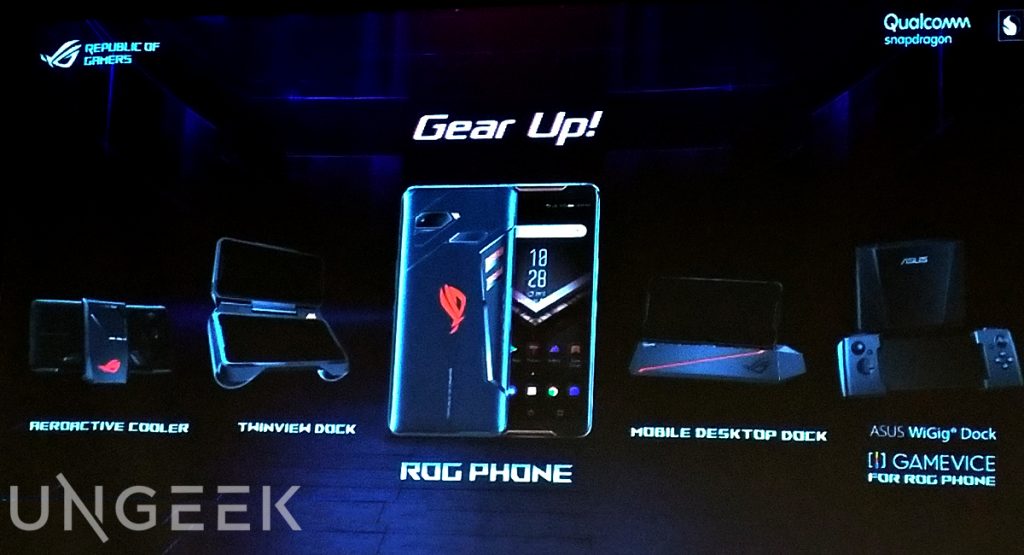 The Aeroactive Cooler improves airflow and cooling to the unit device. 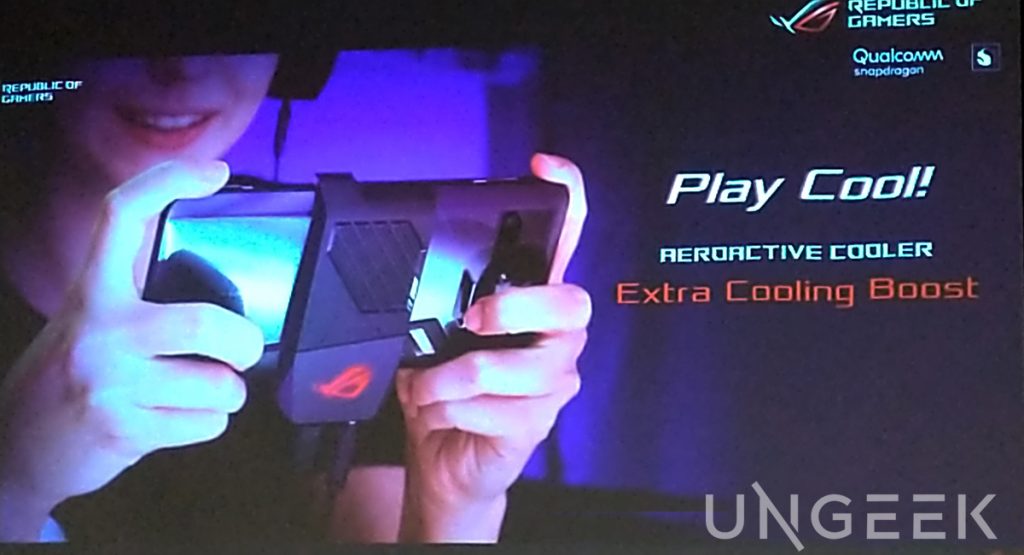 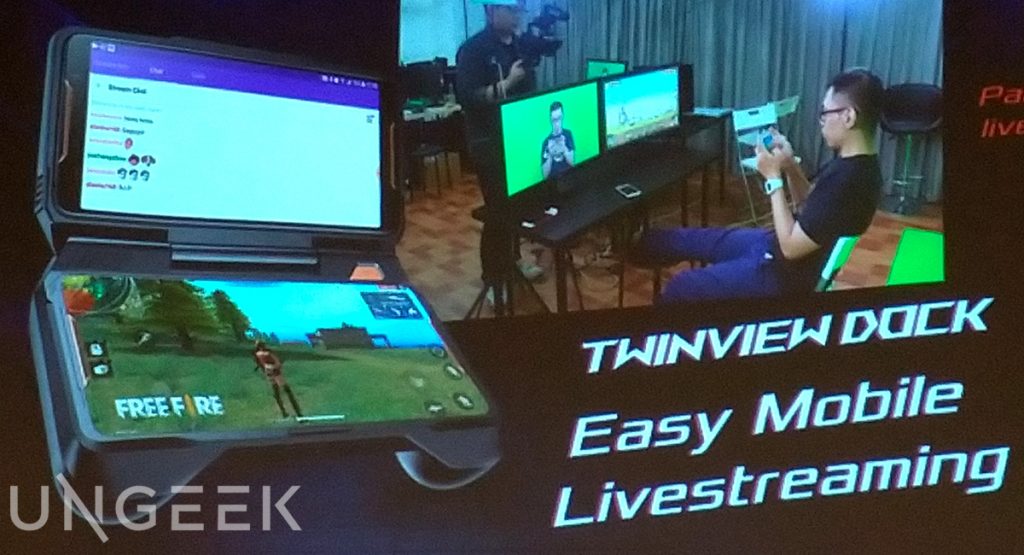 The TwinView Dock gives you two usable screens at the same time. Play with expanded view or use it for better livestreaming and interaction with your community over at Twitch and other partnered streaming services. The dock looks gorgeous, we would comment, however, that the base lacks a bit of weight to counterbalance the ROG Phone’s placement on top (yes, the top screen is where your phone is). Aside from that, it’s a pretty solid “rig” that allows you to livestream with ease. 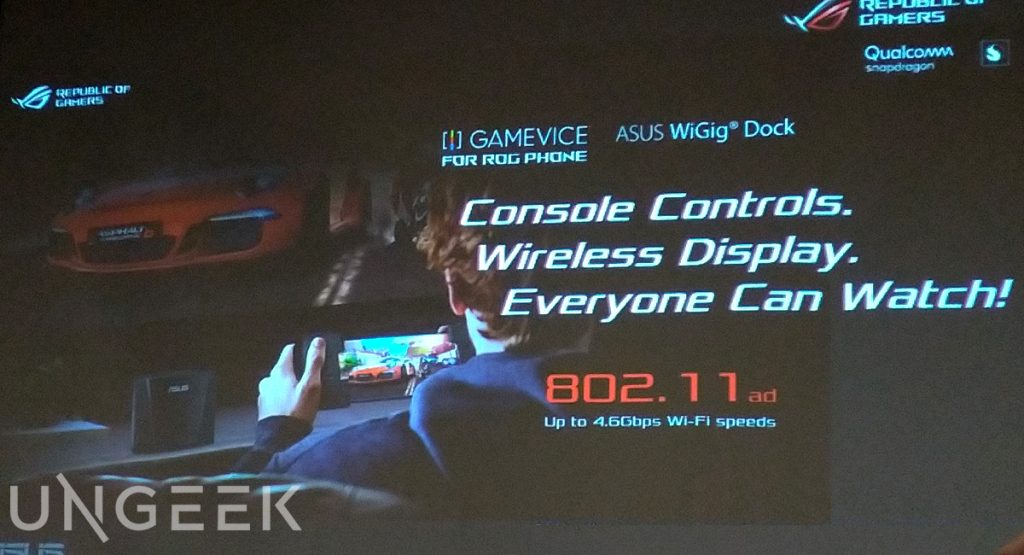 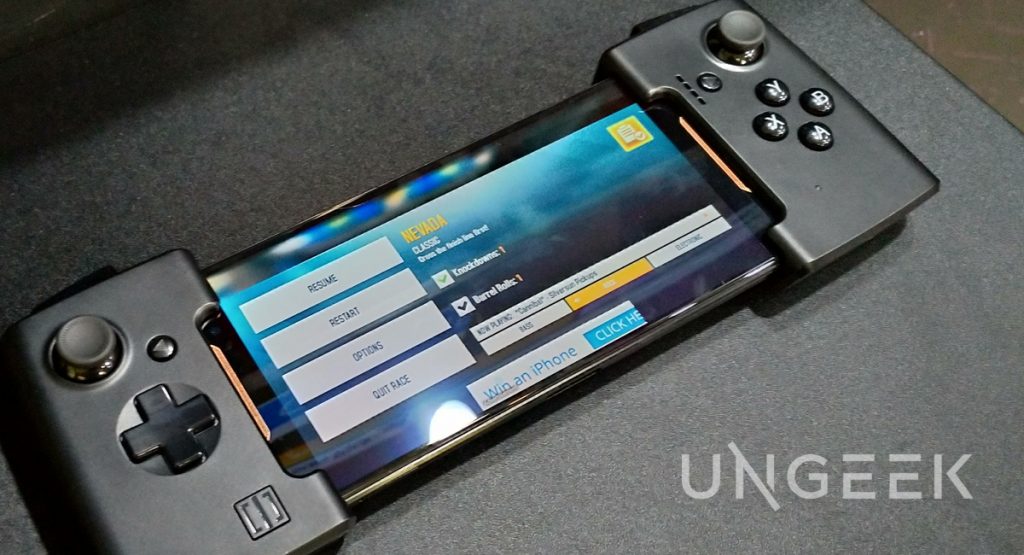 Transform your mobile gaming into a localized spectator event with the GameVice & WiG Dock. The GameVice allows you to add more control over your game by adding physical buttons to your phone while the WiG Dock quickly transfers your phone screen to a bigger tv or screen display. Nintendo Wii much? Sure, but hey, it’s a cool concept for a smartphone and it gives you console-like features of gaming. 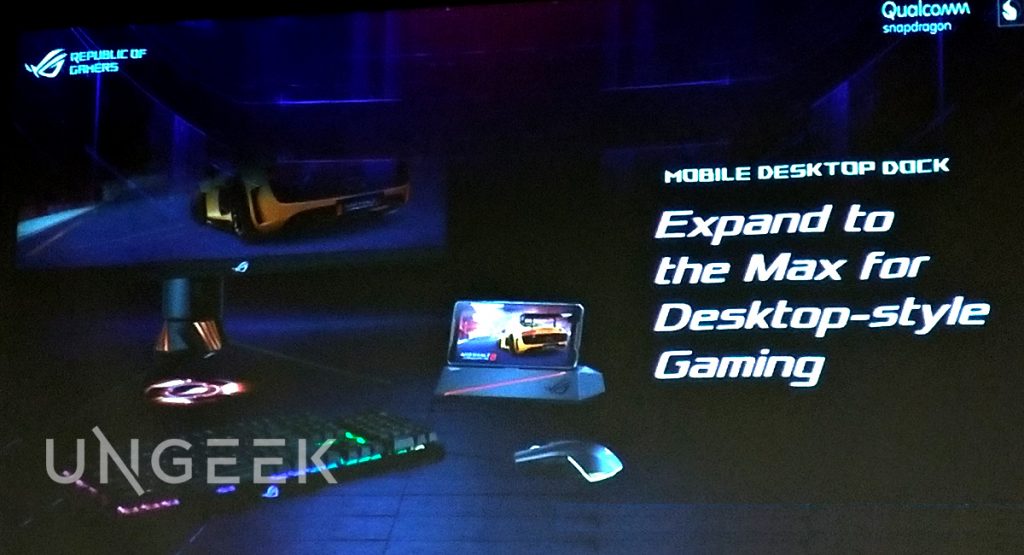 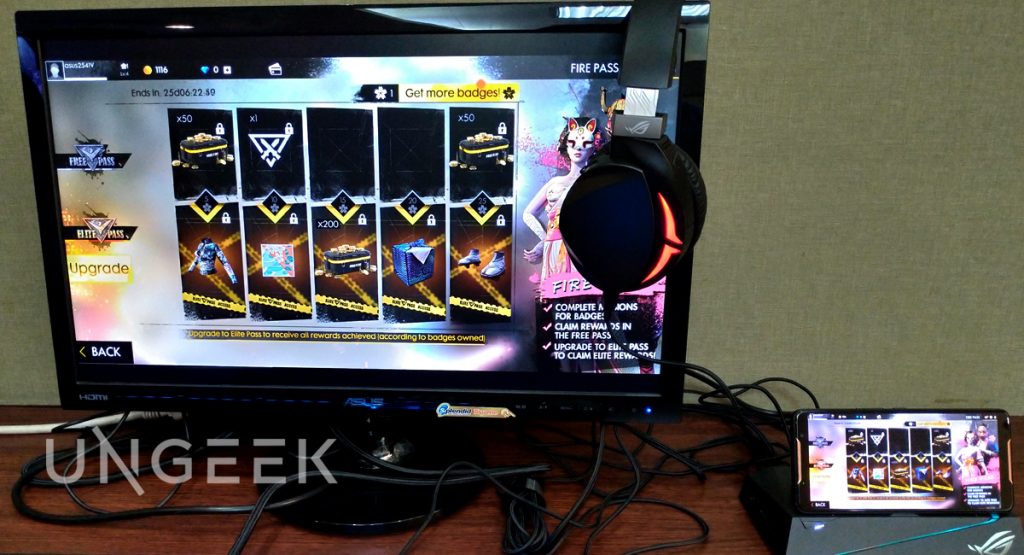 Want more control over your game? Place the ROG Phone on the Mobile Desktop Dock. This literally casts your ROG Phone over your gaming desktop so you can use a mouse and keyboard setup when gaming. 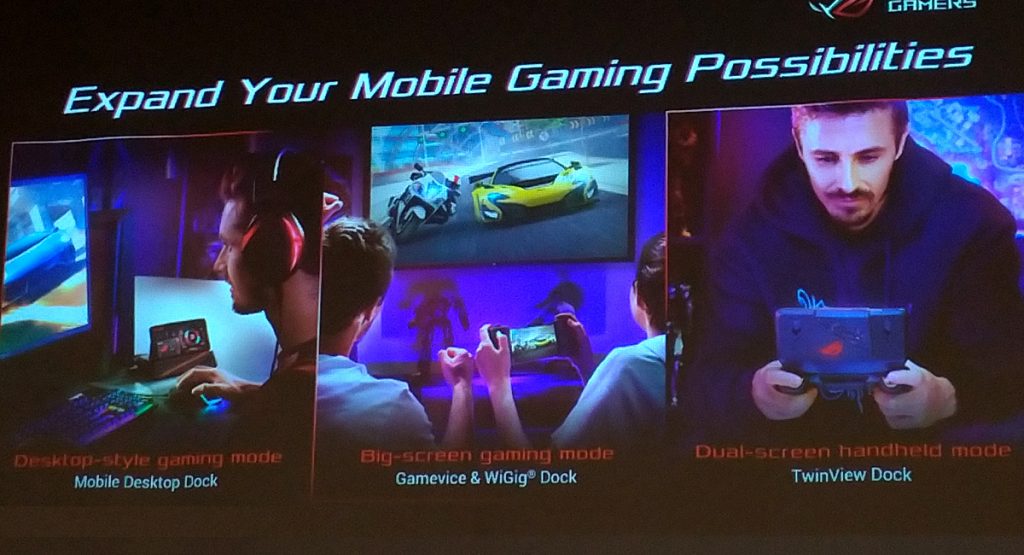 You can bind the keys as well via the Game Genie to fully customize your gaming experience. 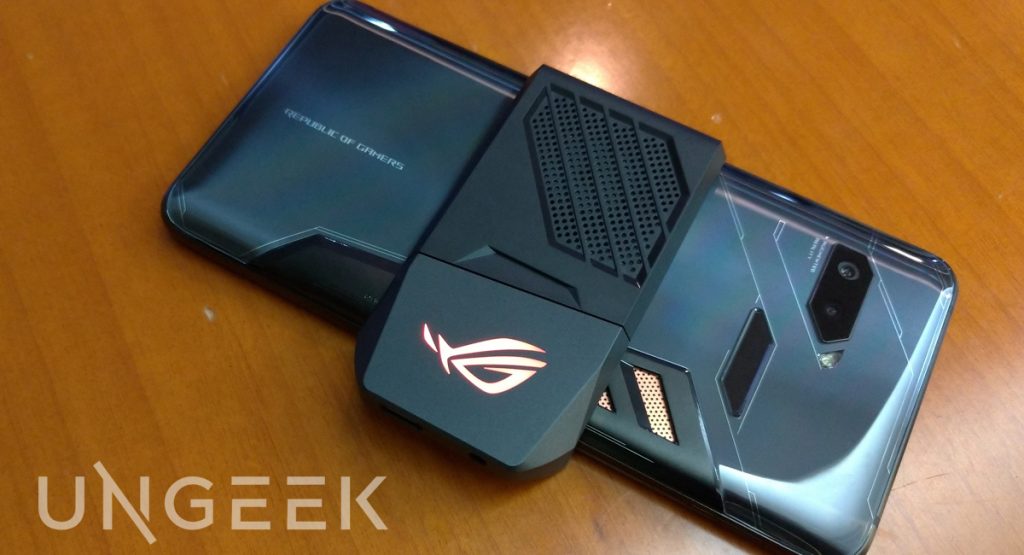 We took a quick look at the phone after the presentation and were more than excited. LITERALLY this is the nicest phone you can have in your hands. The feel is solid and uber-premium, and the specs are truly pushing the boundaries of what a smartphone can have.

As of press writing no information on final specs and price has been revealed, though the ROG Phone will be released in Q3 of 2018 in the Philippines. We will update this once information comes in.