I (try to) Deliver an Analysis of Death Stranding’s Gameplay

I swear I did not take crazy pills. 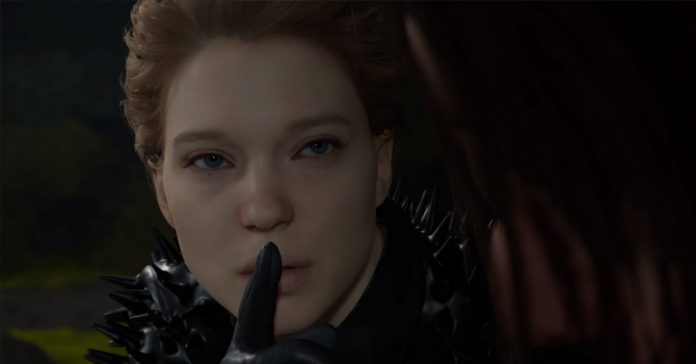 When the Death Stranding Trailer was released during the E3 2018 PlayStation Showcase, it left me with more questions than answers. On my second viewing, I still did not understand a single thing.

But momma didn’t raise no quitter! After all, I’m a big Hideo Kojima fan; I’ve played through (and enjoyed) all the mainline Metal Gear games multiple times, and I even played through Zone of the Enders. With spirits renewed, I dived in once again to Mr. Kojima’s wild ride, and I think may have gotten something…finally.

If you haven’t seen the trailer yet, here you go. Revel in its majestic cinematic glory and post-modern, um, story-telling. You’ll also need to watch it first to understand my analysis.

Now let’s jump right in! A word of warning, though, this analysis is powered by 2 cups of coffee, a can of energy drink and a total of 2 hours of bed rest. If the ramblings seem at all crazy, it probably is — but then it could also mean I’m more enlightened than I ever was before! 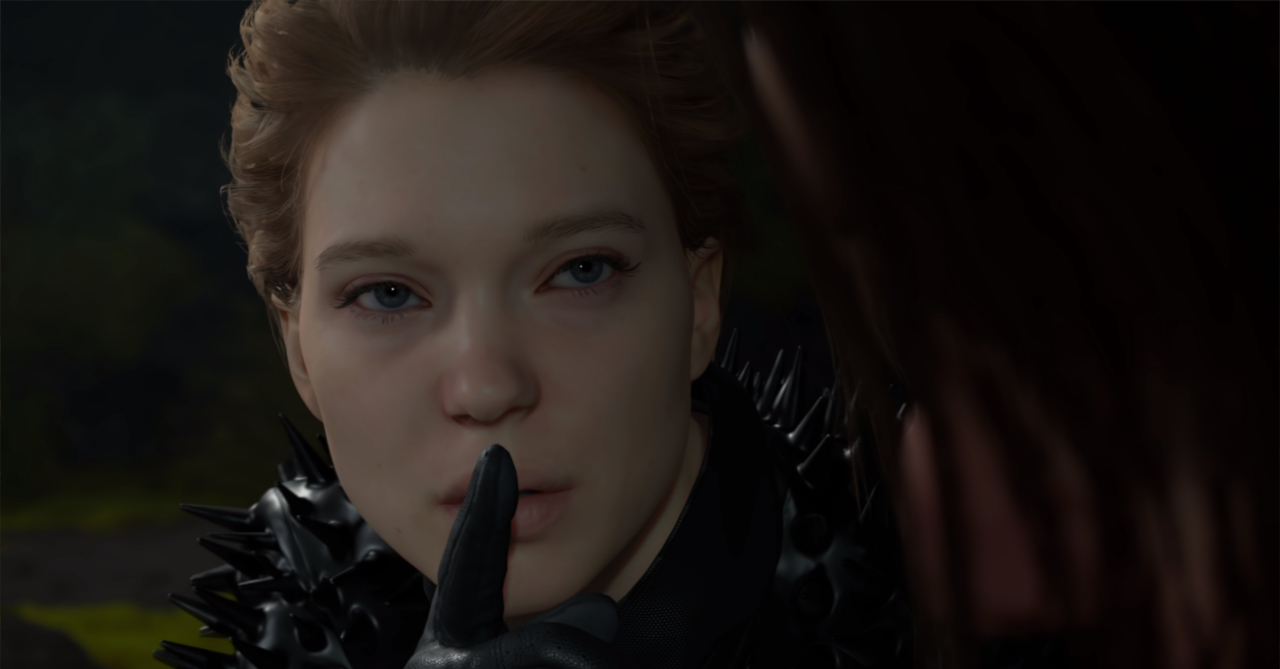 The trailer opened with a voiceover between the protagonist Sam Bridges (Norman Reedus) and a new character (played by Lea Seydoux). During their dialogue, the girl tried to recruit Sam, but he dismissed her, saying “I make deliveries, that’s all.” 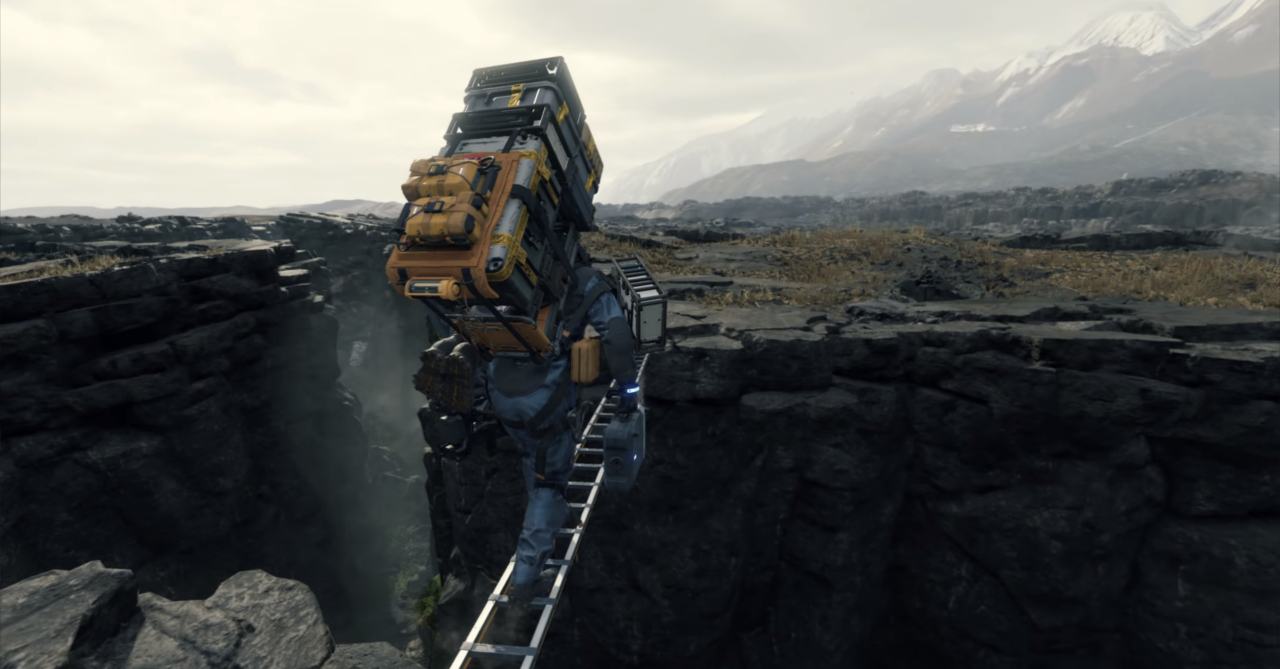 What follows is a montage of what looks to be in-game footage of Sam walking around a variety of different environments, all while carrying different kinds of packages. This leads me to believe that he’s literally a delivery man, a post-apocalyptic one at that.

It actually makes some sense if you think about it. Open-world games have tons of side quests, but most of them are just glorified fetch quests. If Sam is truly a delivery man, then Death Stranding should be full of LITERAL fetch quests. Could this mean that the game will function as a sort of meta-critique on the lack of originality in open-world games today? 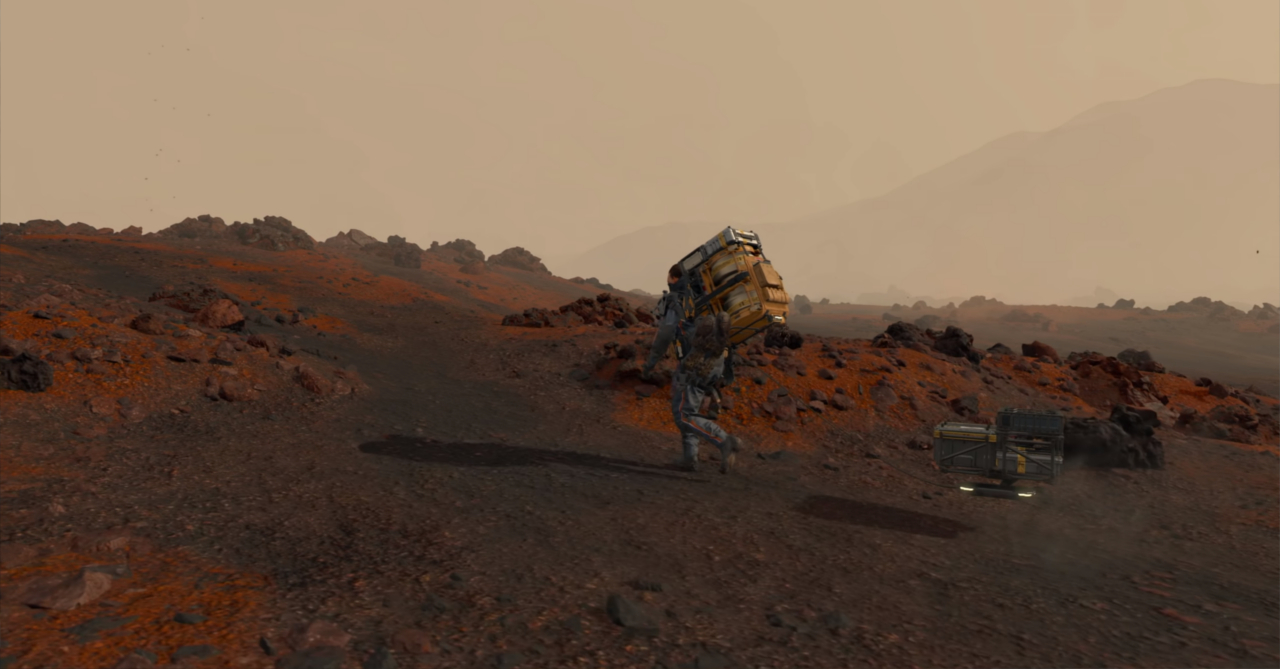 It might be, but I don’t think Kojima is only using this game as a mouthpiece for his thoughts on the state of gaming. Oh no, I think Kojima will weave fetch quests into the game’s story. Other open world games tend to use fetch quests as filler, but if Sam truly is a delivery man in Death Stranding, Kojima will have deftly justified the trope’s use in the game, as well as critiquing it at the same time. 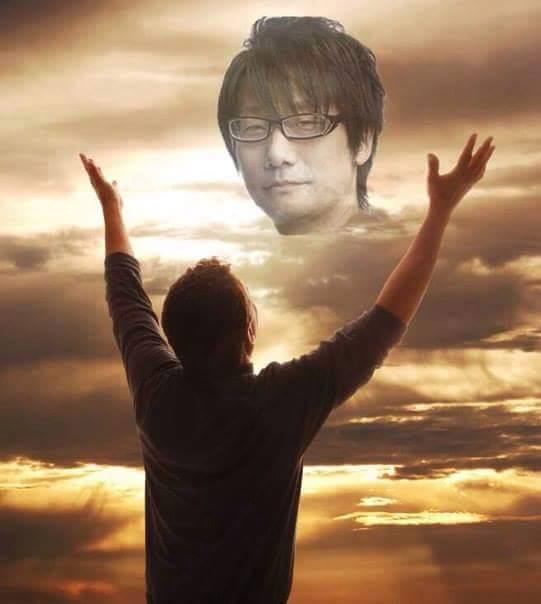 Are you still with me? If you are, then let’s move on to what I think Death Stranding’s core gameplay will be.

In an interview with IGN two years ago, Kojima said that the game will be unlike any other action game before it. And with what we’ve seen, I have to agree. It’s a NO ACTION, ACTION GAME! 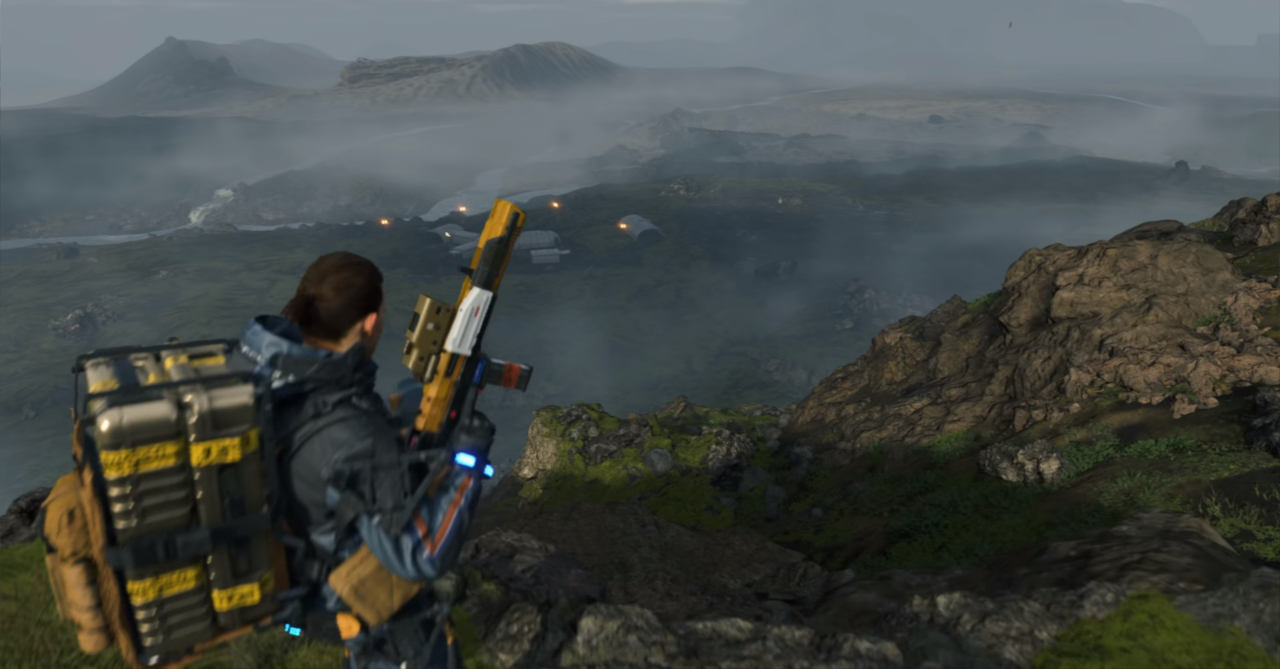 We’ve seen guns in Death Stranding. The trailers confirmed this. But we’ve never seen it used once against the more obscure enemies lying (or floating) around. Maybe it’s for human enemies? Maybe a delivery goes wrong and Mary Sue wanted her package right now when the stamp clearly says STANDARD. That’s when you whip your badboy and you tell Mary Sue, you tell her, “Nay! PAY THE PROPER STAMPS, LADY!” –uh okay, where was I? Sorry, I got carried away.

Okay, so instead of going gung-ho, Sam, it seems, will have to rely on stealth. But how does one go through a mine-field of undetectable horrors? In this game’s reality and in what has yet to have any logical and/or solid explanation, we see those traversing these lands fitted with light-contraption-detector-thingies that’s seemingly powered by an immensely powerful fetus. The power of purity, maybe? OR Is this an allusion to human beings as battery? I’m getting major Matrix vibes here. 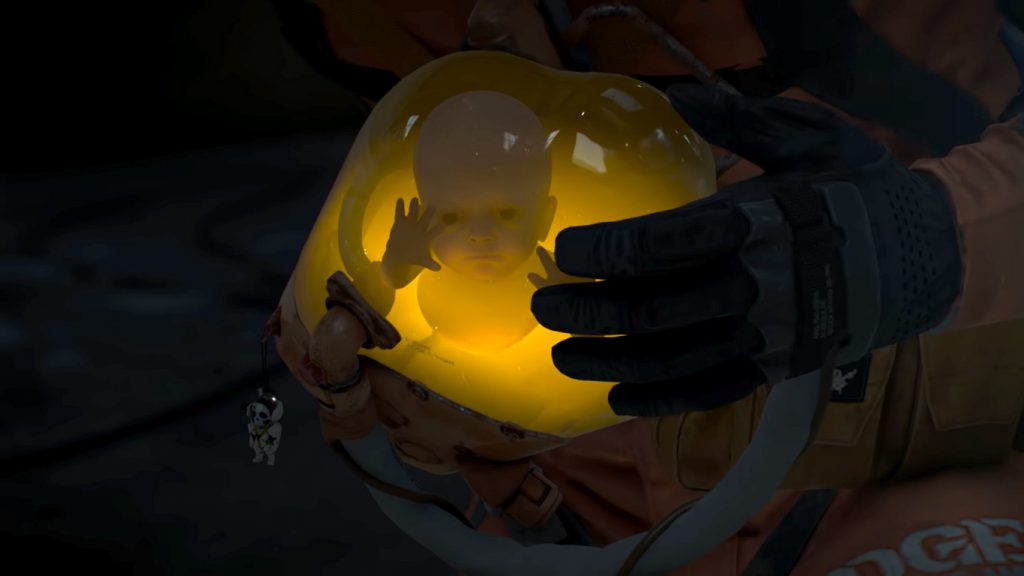 In typical stealth games of yore, the AI is usually dumb. Human AI have unrealistically slow reactions and repetitive voice lines when panicked (cue: Arkham Games, anyone?). But if Death Stranding’s enemies are mostly aliens (or whatever the things above are), then this should be an elegant solution to the “Dumb AI” plaguing stealth titles. In fact, I would argue, from the small clip shown, that the creatures are smarter than what they appear to be. They react quite well to their surroundings and you — even if all they seemingly do is hang around. 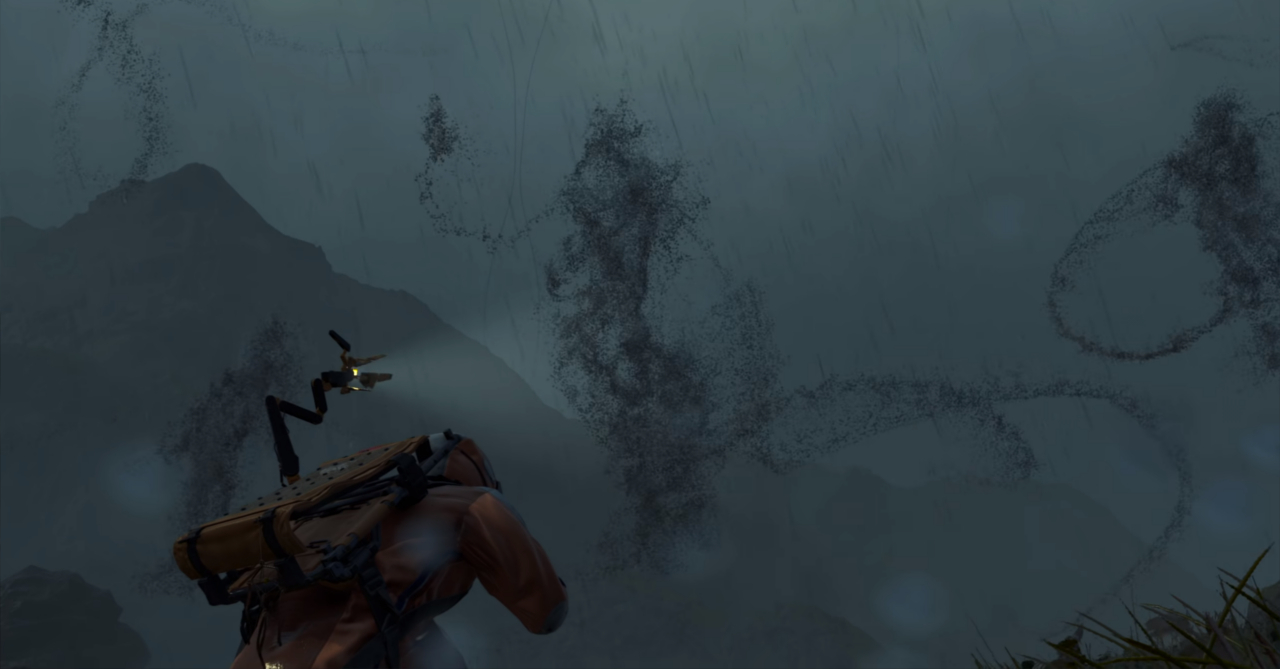 Since the creatures do not have to act human, them sulking and hanging around actually makes them more terrifying, because their reactions are more unpredictable. Will they move? Can I make it through this terrain? Will this baby grow up to be an old and happy (delivery) man?

One thing’s for sure, the game truly captures terror and props needed to be given to the actors and animators for creating a truly convincing delivery. The tension reminded me of how I felt when fighting the parasite unit in MGSV, or the time when I watched a playthrough of P.T. If this game plays anything like Metal Gear mixed with the sheer terror of Silent Hills, then we should be in for one hell of a ride. 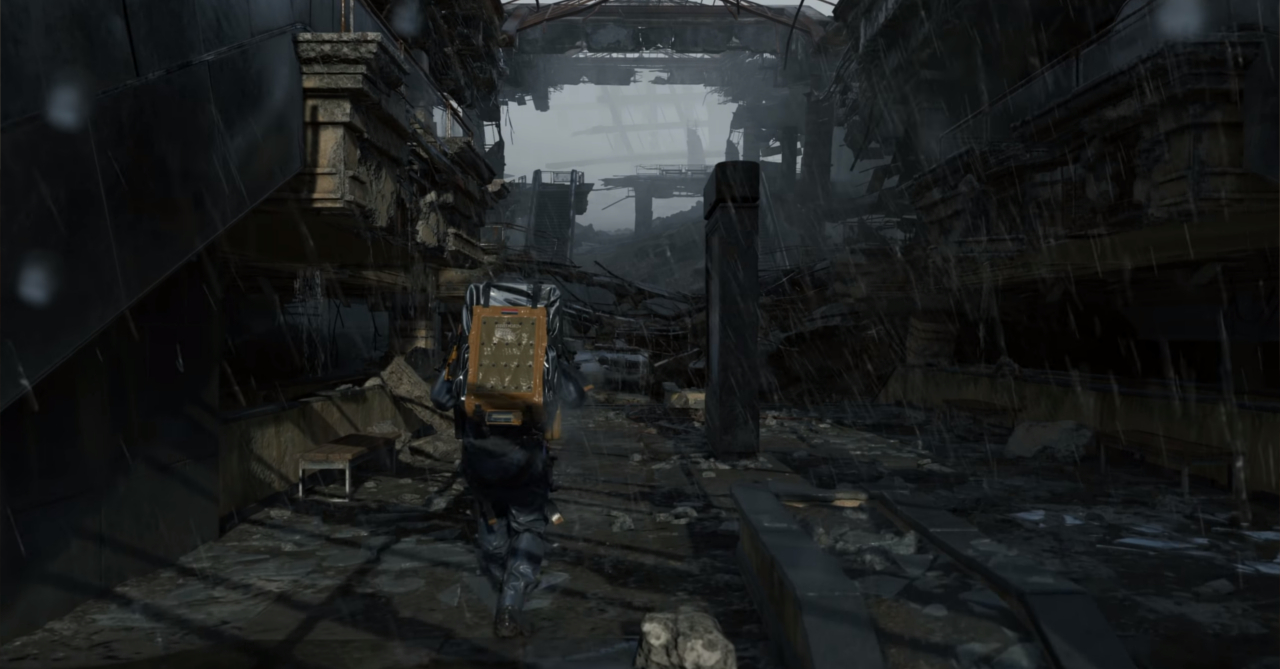 So there you have it! Death Stranding: Post-Apocalyptic Delivery Simulator. But really, is the game delivering (eeeh?) something more than just a glorified sci-fi survival-horror with beautiful Prometheus-like settings? Or is the delivery the game itself!

In any case, I’m willing to bet that Death Stranding will have loads of delivery quests as part of the game’s overall quest system –if that’s not the main story arc itself.

So come join me as I watch the trailer for the 20th time and see if I can make further sense into this. I mean, I haven’t even touched upon the time-altering rain “Timefall“. Oh you’ve seen it? Well you need to watch it again. I SAID WATCH IT AGAIN!