OPPO could be in cloud 9 with this new release. 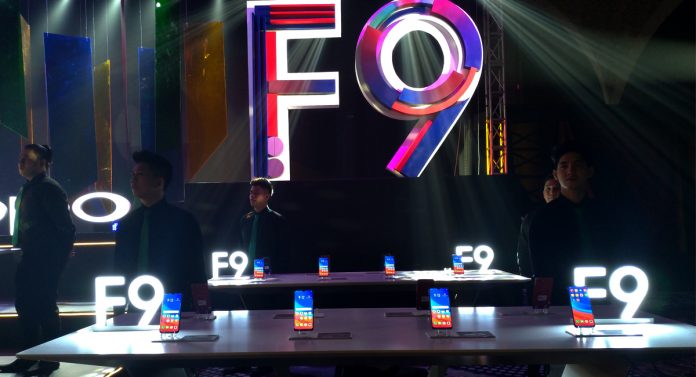 Teased for quite some time now, OPPO’s latest phone, the OPPO F9 is now here – or will be, rather. Launched officially last night at the Shangri-La The Fort, the OPPO F9 is touted as a strong follow-up to their best-selling F7 release.

Celebrities graced the stage and swear by the F9’s key features like the VOOC Flash Charge, which allows you to get 2 hours of call time in as little as a 5-minute charge, and of course, the most obvious change on the F-series, the waterdrop notch.

If you’ve handled the OPPO F7 or have been following the site, you’d notice that the internals of the F9 is almost similar to the F7 – and you’d be right to think so. The processor is exactly the same as the F7, which isn’t really a bad thing. Remember, the MediaTek Helio P60 helped redefine the brand and offered the F7 a smooth, flagship-like performance. It’s one of MediaTek’s strongest chipset to date, able to rival those from Snapdragon’s previous-gen and even current-gen chip (to a degree).

When OPPO’s Product Expert, Daniel Lardizabal, took the stage he mentioned that there are 2 things that are high on their consumer’s wish list when considering a smartphone purchase. Battery and RAM. So, OPPO prioritized these two aspects accordingly.

Fitted with 6G of RAM, the OPPO F9 belongs to the few mid-range smartphones that offer this feature. 6G will allow you to run most apps without much problems and cycle through various applications without the phone bugging down.

For the F9’s battery, the company highlighted their VOOC (pronounced as vuc) Flash Charging feature where the F9 gives you a whole lot of juice for the very little time its plugged in. In an actual, on-stage demo, Daniel demonstrated that a 5-minute charge will give your phone around 10-12% battery already. Pretty insane and quite convenient especially for the 3500 mAH internal battery that the F9 houses.

But perhaps the key aesthetic of the F9 – the thing that will set it apart from every other smartphone out there—would be its “Waterdrop Notch”. With just one camera for selfies, the F9 trimmed the notch down exposing more display screen for you to enjoy.

As with any smartphones that came out in the past couple of months, OPPO understands the value of uniqueness of color as part of the purchasing decision of the market which is why the company invested in unique spray-painting methods to ensure that that the F9 produces some of the most brilliant color palettes seen on a smartphone. Welcome Sunrise Red, Twilight Blue and Starry Purple: three of the F9’s official colors.

Remember the Black Diamond of the F7? The unique color-bending/ prism-like shape that snakes across the phone’s back plate? Well, it’s back for the F9, but with a few twist. One, the diamond pattern seems smaller, and two, it can be found on all 3 colorway of the OPPO F9.

We tried a quick hands-on with the unit during the official launch and was able to take a couple of selfies and some photos using the rear cam. Unfortunately, we weren’t able to port the photos to our devices but what we can say is that the Helio P60, coupled with OPPO’s relentless pursuit of mobile photography, provides strikingly brilliant photographs similar to our experience with the F7. They did add a couple of built-in video modes for budding content creator like the capability to shoot slow-mo clips annnnd a time-lapse setting for both rear and front camera. That one, I’m pretty excited about considering we use a whole lot of time-lapse edits on our vids.

What else can we expect from the F9? There’s the updated ColorOS 5.2, OPPO’s own operating system which is based on the Android 8.1 architecture. According the presentation, the ColorOS 5.2 analyzes and aggregates user preferences and interest to enable the F9 to be “One Step Ahead”. Oh, and the F9 is also equipped with Google Lens right off the box. A really nifty application that identifies objects, scans barcodes and well, can even lift the WiFi password of a router so you can connect instantaneously (this one I’m a bit wary about…but I’m sure there are safety features to prevent the app from getting unwanted information).

What surprised us with the OPPO F9 is its price. Priced similarly to when the OPPO F7 was launched, the F9 will retail for Php 17,990 for the 6G RAM/64G ROM variant. Upon pre-order of the units, expectant owners will also gain a ton of wonderful freebies so that you can fully maximize your new F9!

OPPO F9 will be initially available in Sunrise Red and Twilight Blue (with the Starry Purple serve as a limited/ special color release). Additionally, consumers may avail via Home Credit at 0% interest for 9 months and will be available with the Smart GigaX Plan 1299. Pre-order starts August 24, 2018 to August 30, 2018.