Is this the ultimate portable gaming machine? 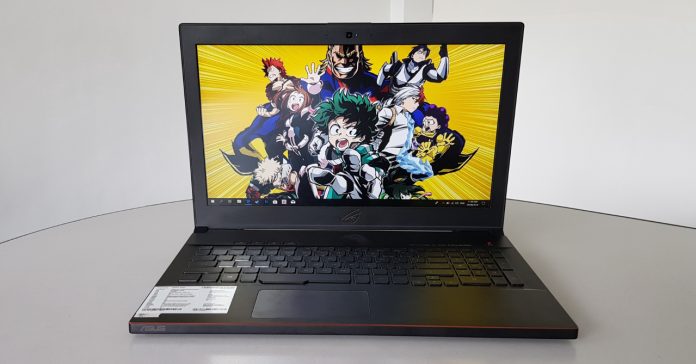 ASUS made waves in the PC gaming scene last 2017 when it first debuted the ROG Zephyrus, a gaming laptop packed with top-of-the-line specs in an incredibly slim package. Just a few months ago, ASUS revealed their follow-up, the Zephyrus M. This refreshed Zephyrus now has an eighth-gen Intel Core i7 processor along with an updated design, complete with a more traditional trackpad placement. It also retains the previous model’s 10-series NVIDIA GPU, as well as the innovative underside vents for effective system cooling. 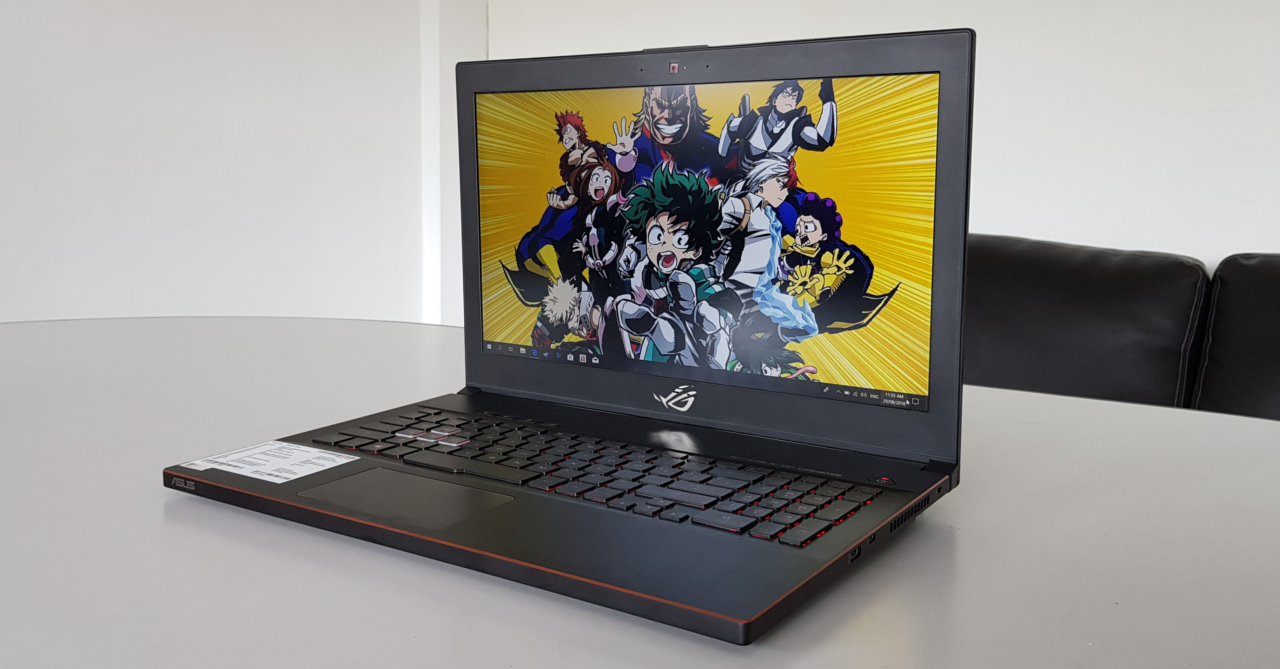 On paper, ASUS seems to have another winner on its hands. But what about in actual use? We find out if the new ROG Zephyrus M is worth your hard-earned cash in our review! 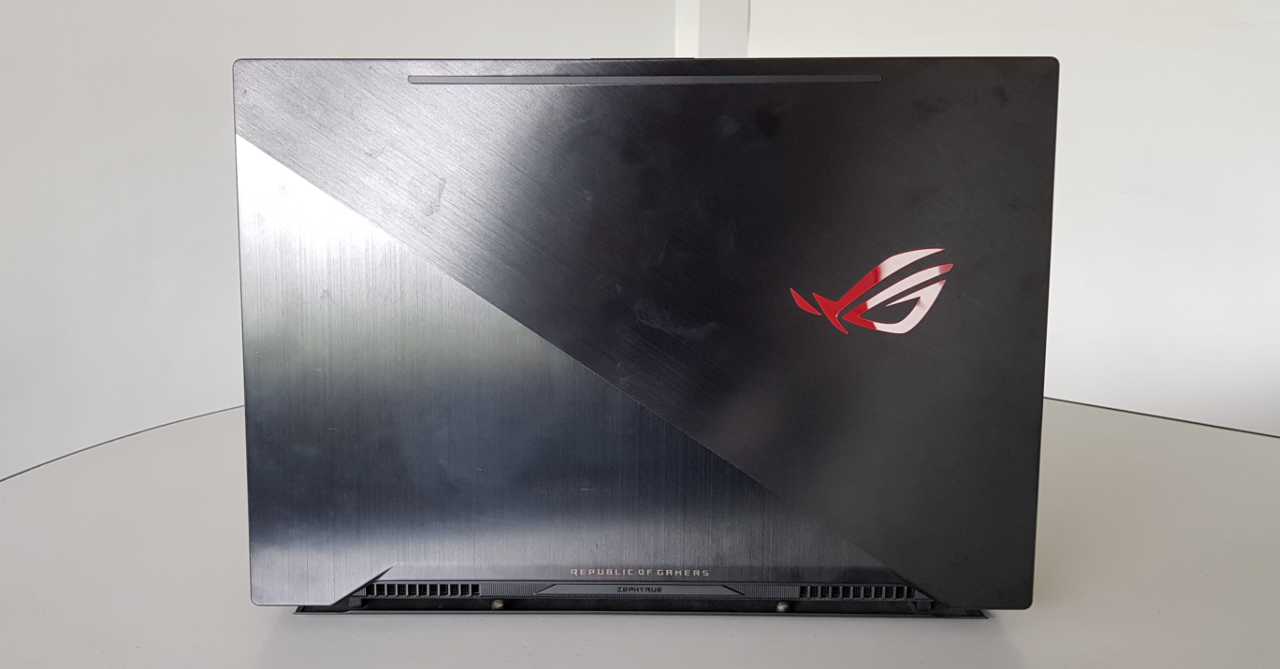 Typical gaming laptops back then had really eye-catching designs, which for me can be a bit too much. The ROG Zephyrus M is unlike those though, as the laptop has an elegant look with its brushed metal finish, but still retains a bit of that aggressive “gamer” design. If you’ll use it for work, it won’t stick out like a sore thumb in the office in my opinion (except maybe for the red RGB logo). It’s also incredibly thin and light for a high-end gaming laptop, perfect for frequent travelers who still want to get some gaming done. 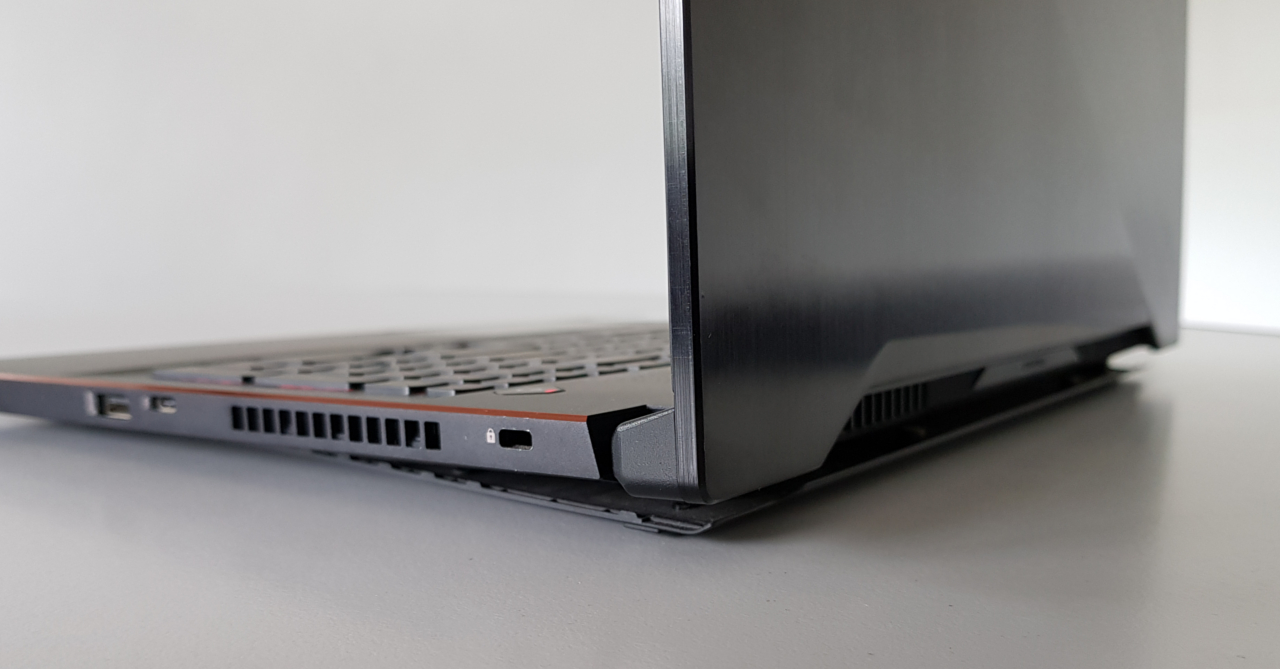 At first I was concerned that the Zephyrus M will run hot given its thin form-factor. But the ‘M’ model retains the previous Zephyrus’ innovative bottom panel, which opens up when you lift the lid to provide better airflow. It may not seem like much, but it’s actually a big help; the Zephyrus M ran cool throughout my testing thanks to it. And before you ask, the bottom panel is pretty sturdy; I tried pressing down on it and it kept the laptop propped up nicely without much flex. 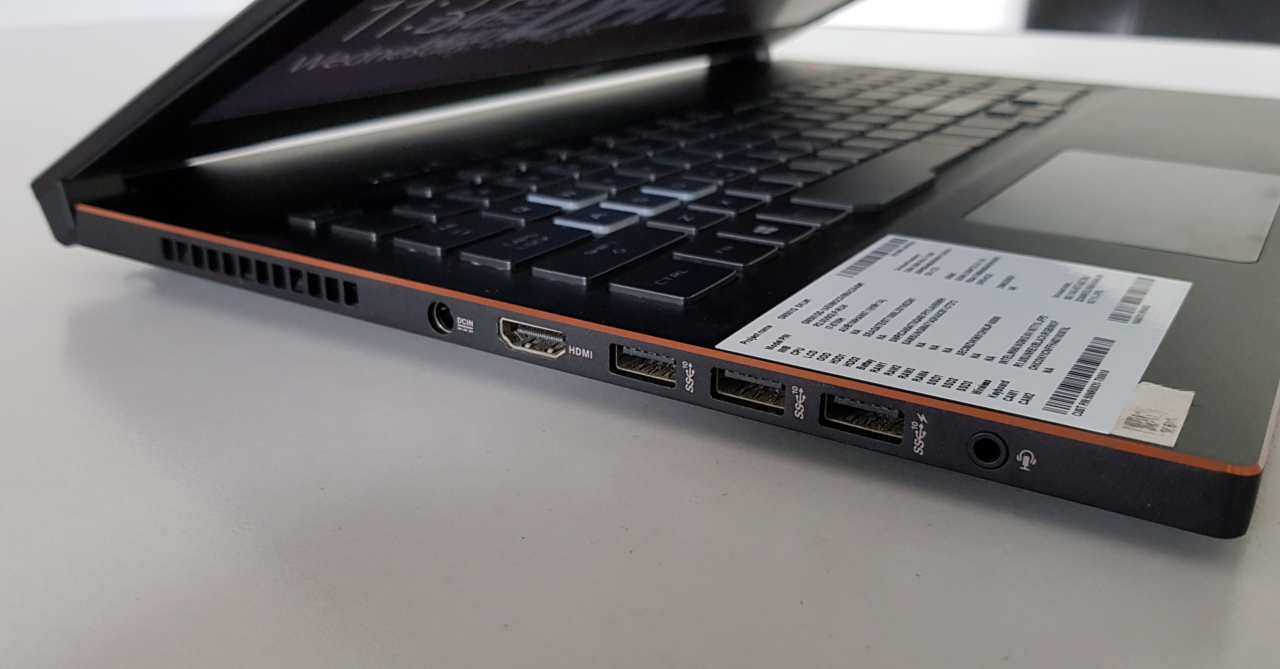 Even though it’s a slim laptop, it has a good amount of I/O ports. Among the ports on the Zephyrus M are: Four Type-A USB 3.0 ports, a Thunderbolt 3-ready USB Type-C port, an HDMI 2.0 port, and a combo headphone/mic jack. The only thing it’s missing is an ethernet port (and maybe an SD card reader), but otherwise it has everything you need connectivity-wise! 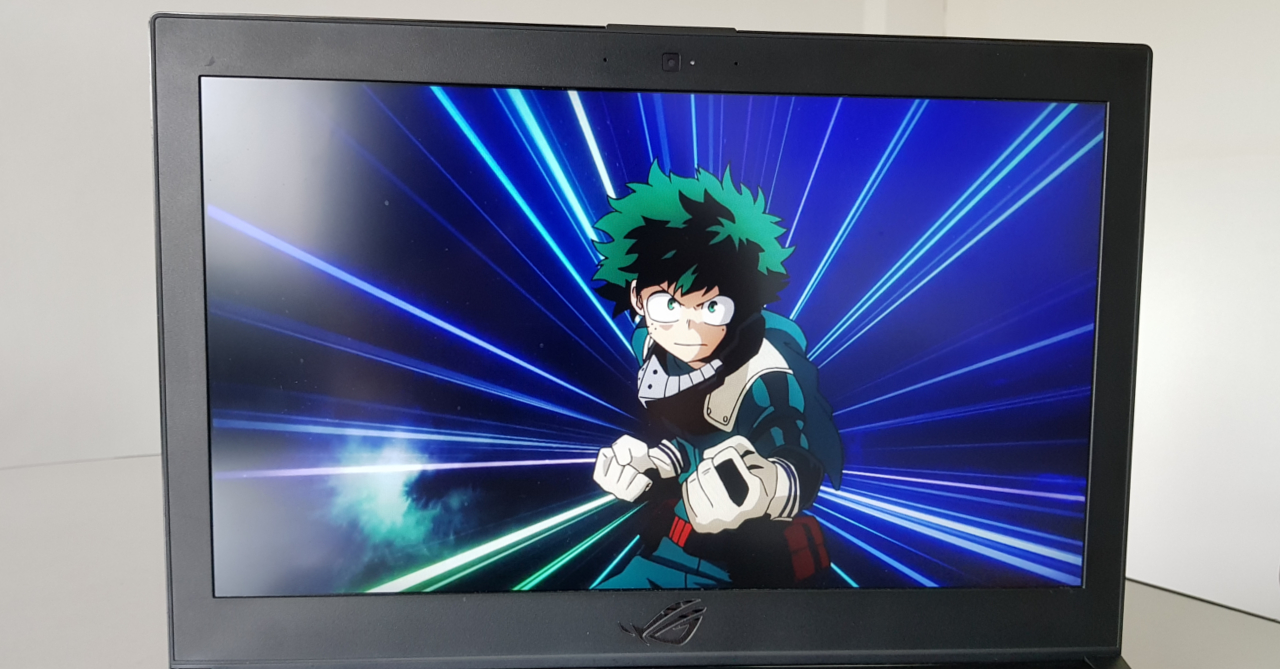 As a high-end gaming machine, the Zephyrus M is packed with a 15.6″ Full HD display with a whopping 144hz refresh rate! You probably won’t be able to take advantage of the high refresh rate when binge-watching anime/tv shows (which generally have 30 FPS), but the display is still plenty awesome for marathon binge sessions. 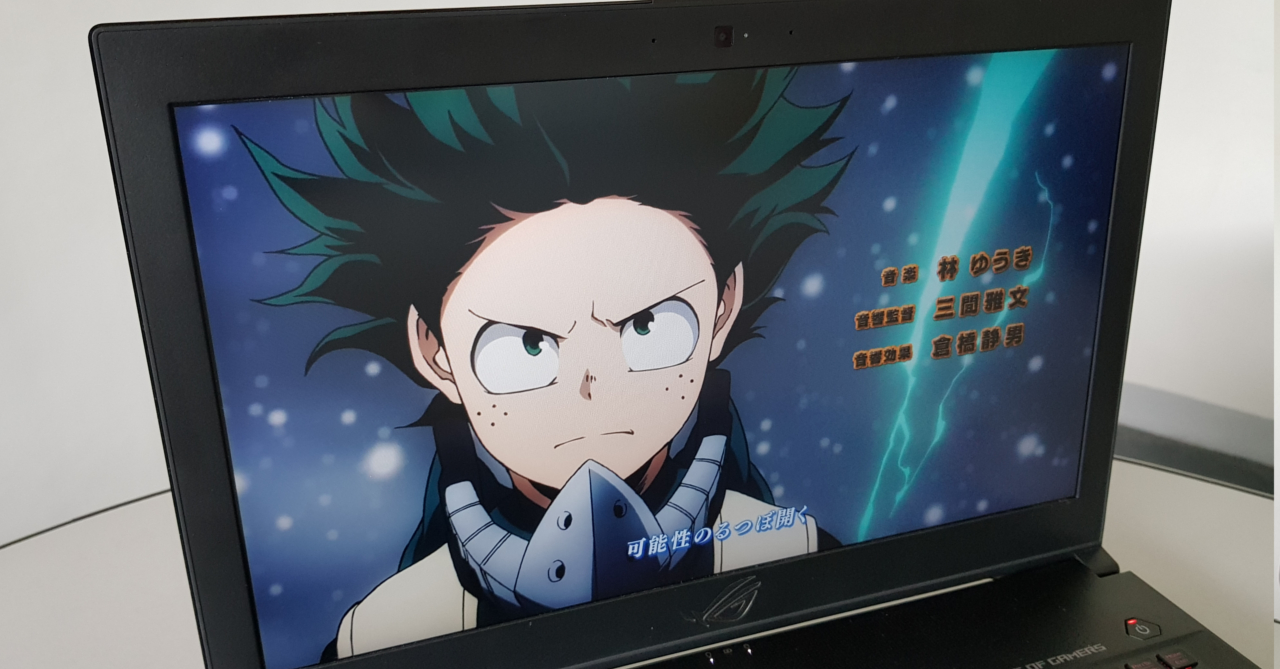 The Zephyrus M’s display produced vibrant colors and shard details, perfect for watching colorful anime such as My Hero Academia! It also played well with live-action movies such as Star Wars: The Last Jedi, as the ship battles looked amazing on the display. The display got plenty bright and viewing angles are also pretty good, meaning the Zephyrus M is a good choice for gamers who are also movie buffs or anime fanatics. 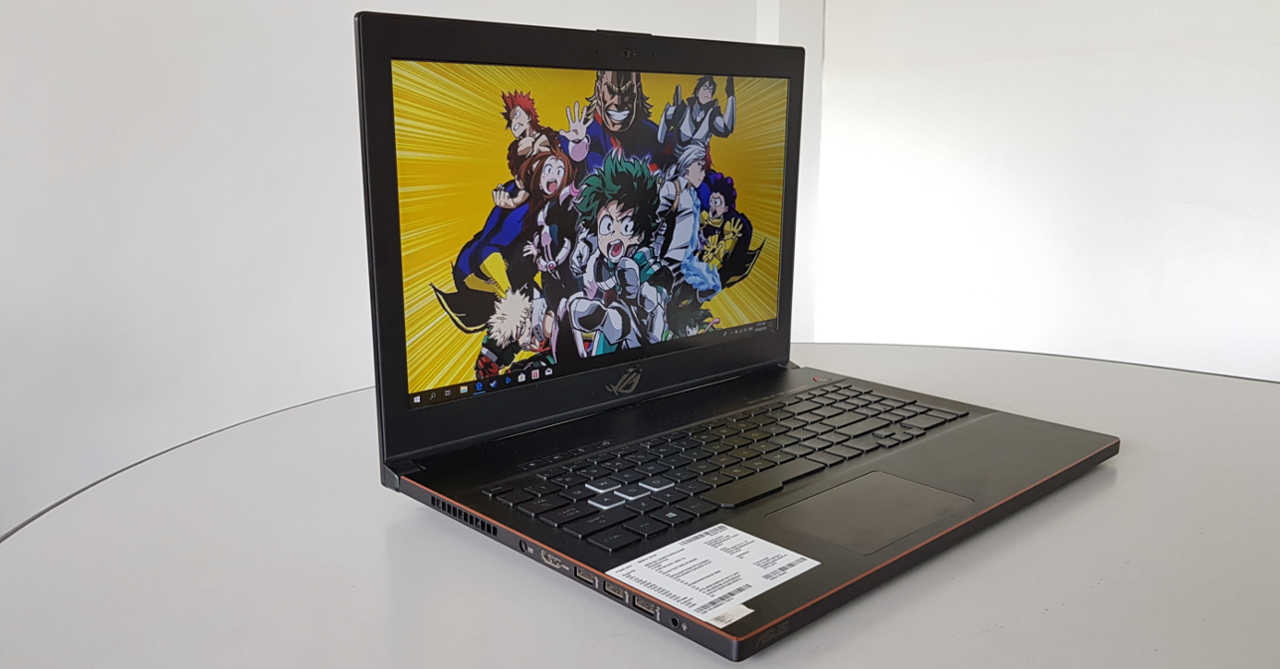 If you do choose to binge-watch a series on the Zephyrus M, be prepared to bring some speakers or a pair of headphones, as the laptop’s bottom-firing speakers didn’t get as loud as I preferred. The good news is that the sound quality is pretty good, even at 100% volume.

When watching a movie/series, you can get away with the onboard speakers if you’re in a quiet enough room. In gaming though, headphones or speakers are a must, as the fan can get quite loud in heated (heh) gaming sessions. 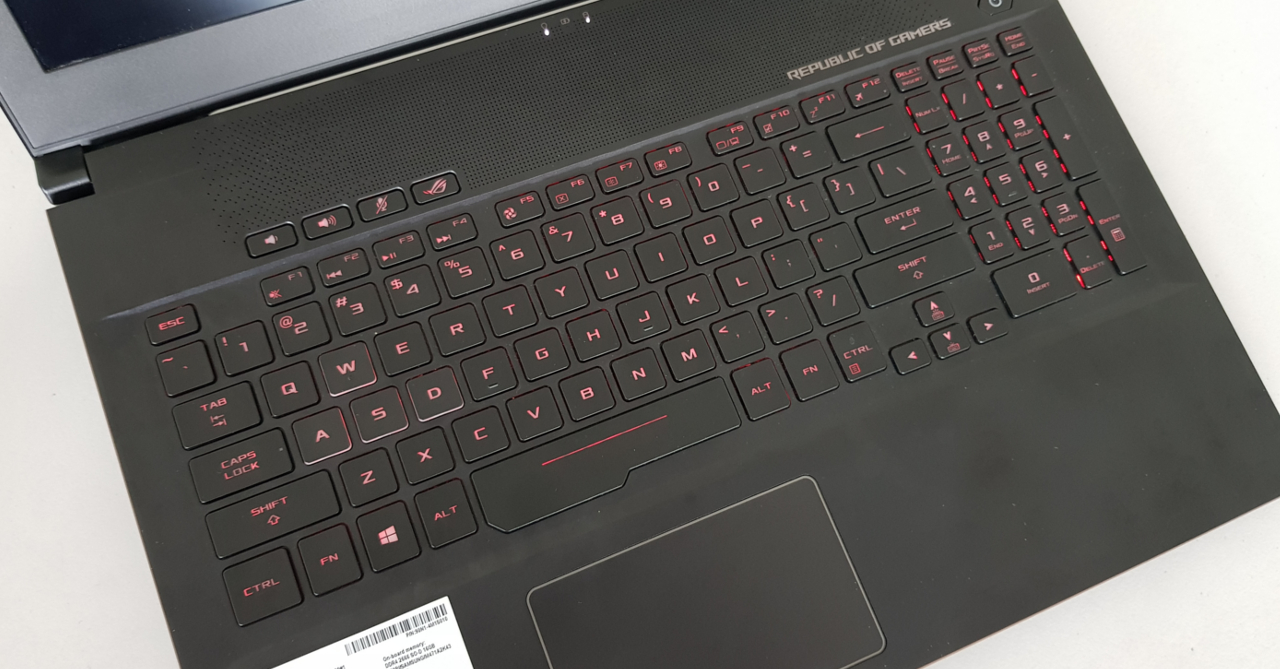 The Zephyrus M comes with a full RGB keyboard, complete with a number pad. The trackpad placement in this laptop is now in a more standard position, compared to the previous Zephyrus where a hybrid trackpad/numpad was squeezed into the right side.

While the laptop’s keyboard should satisfy plenty of gamers, it does feel a bit mushy for me personally. Of course gaming laptop keyboards can’t compare to full mechanical ones, but I would’ve preferred more feedback from the Zephyrus M’s keys given that there are other gaming laptops with slightly better keyboards (the Predator 15 comes to mind); plus I expected more from a laptop at the six-figure price range. 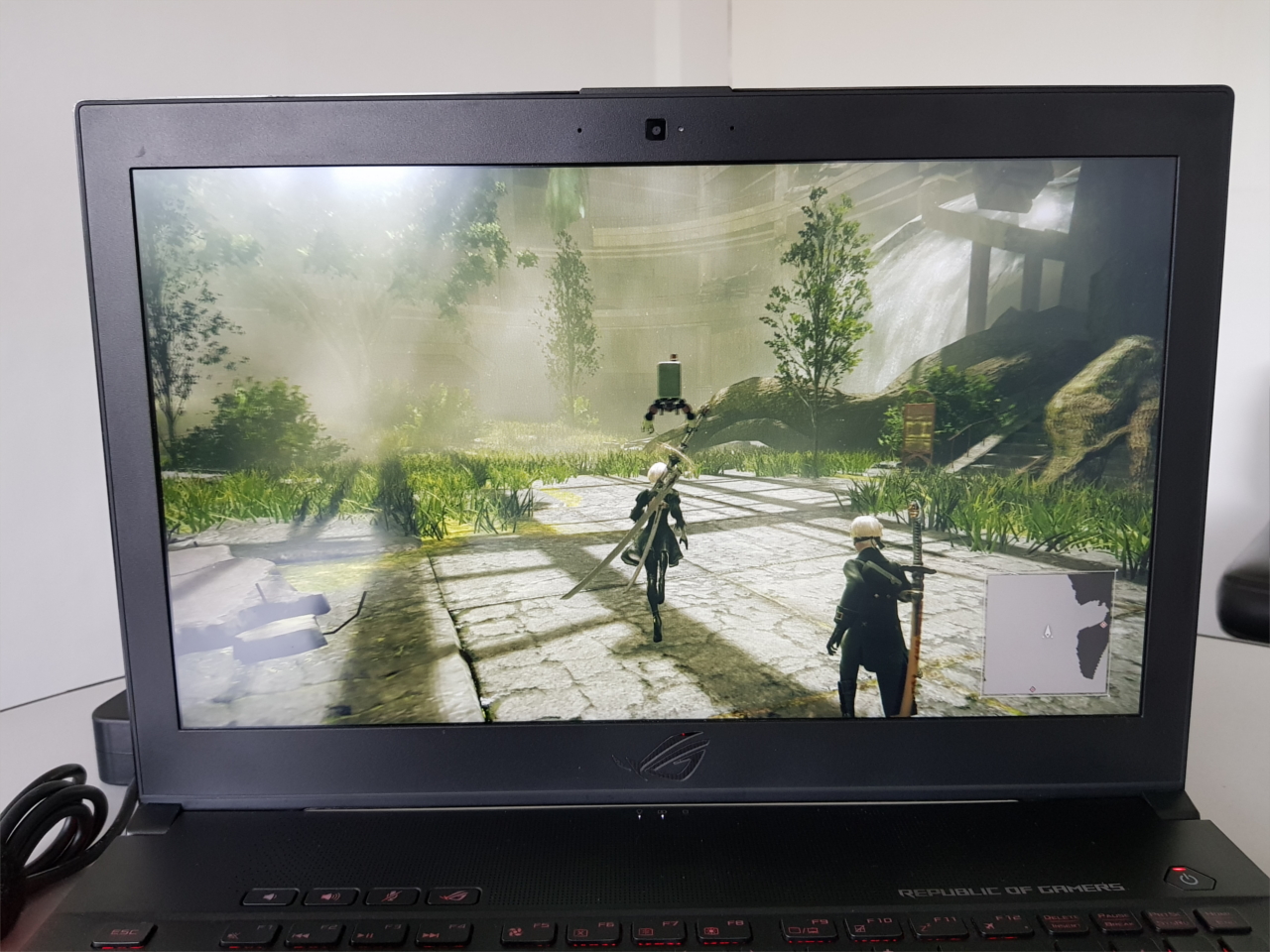 With an 8th-gen Intel Core i7 processor and an NVIDIA GTX 1070 GPU, I expected the Zephyrus M to be great for gaming, and it delivered in spades! The Zephyrus M handled every game I threw at it with ease, be it esports titles such as Overwatch and Dota 2, or triple-A games such as Nier: Automata. All the games ran buttery-smooth and screen tear-free, thanks to the G-SYNC enabled 144hz display.

For more hardware-intensive games such as Rise of the Tomb Raider, the Zephyrus M didnt’ disappoint as well. In the Rise’s in-game benchmark tool, the Zephyrus M averaged a 95.64 FPS on Ultra High, meaning this laptop should be able to handle practically any game out right now. Plus, the Zephyrus M didn’t get hot at all during my time gaming on the laptop. 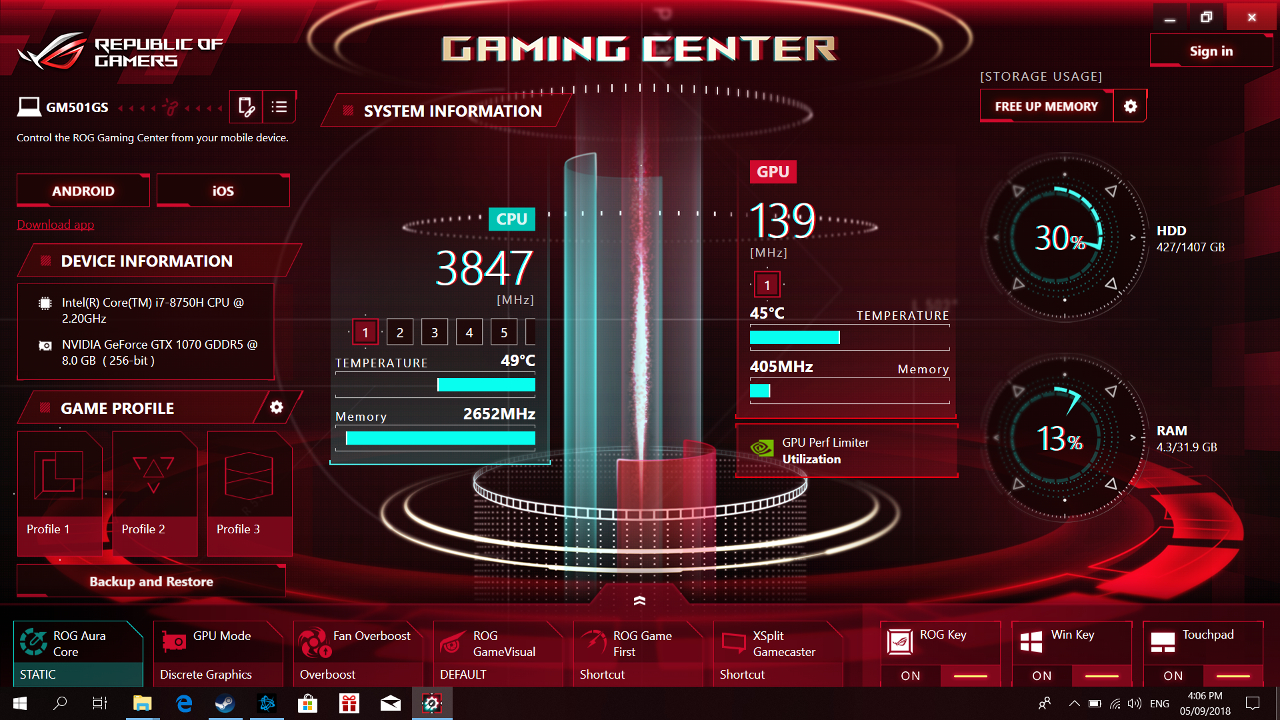 The Zephyrus M also has the ROG Gaming Center, which lets users control the laptop’s fans, GPU mode and more. The Gaming Center also shows CPU, GPU, RAM, and HDD usage, meaning power users can check and see if they can squeeze out even more gaming performance. 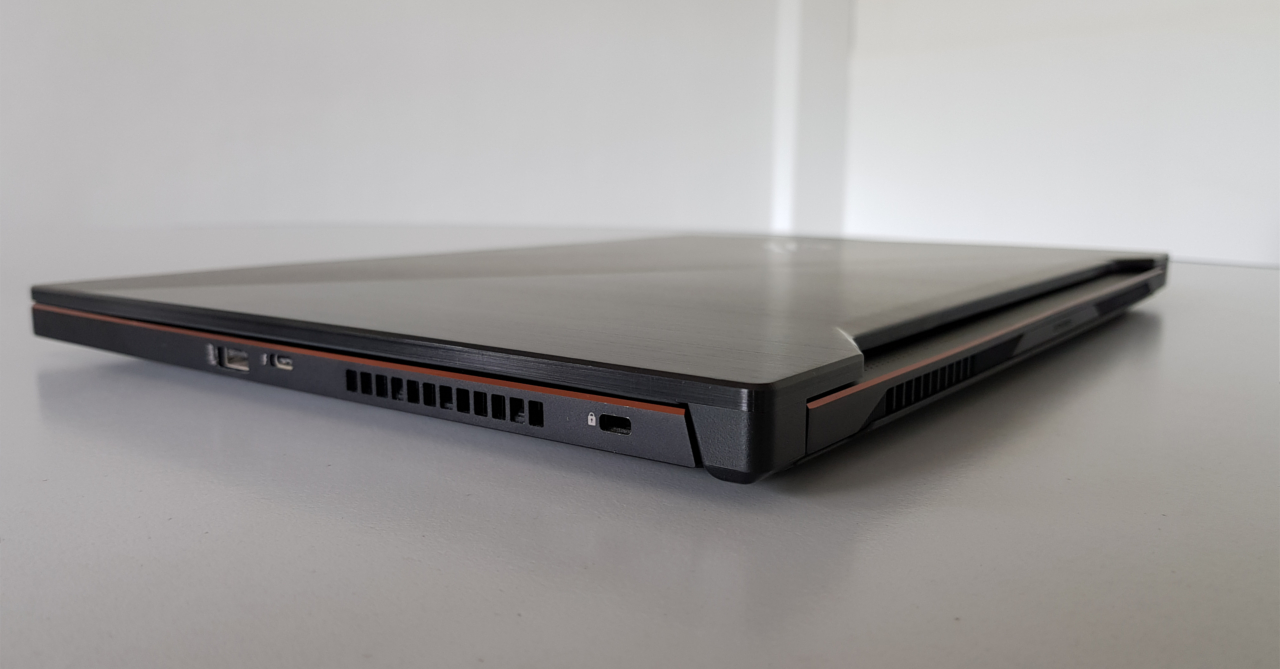 Gaming aside, the Zephyrus M performed incredibly for day-to-day tasks. Not surprising given its 32 GB of RAM and 512 GB SSD + 1 TB HDD storage combo. There’s just one problem with it, and it’s the battery life.

Higher end gaming laptops generally have a poor battery life, and the Zephyrus M is no exception. In its default GPU Mode, the laptop ran out of juice before Star Wars Episode VIII finished playing (around the 2:20 mark). Putting the laptop into the integrated graphics mode did improve the battery life, but only by around 40 minutes. With extra battery management, you can probably squeeze up to four hours on a single charge, but I expected more from the Zephyrus M, given both its high-end price and its thin form factor. It would’ve been a perfect gaming + work laptop if the battery life was much better. 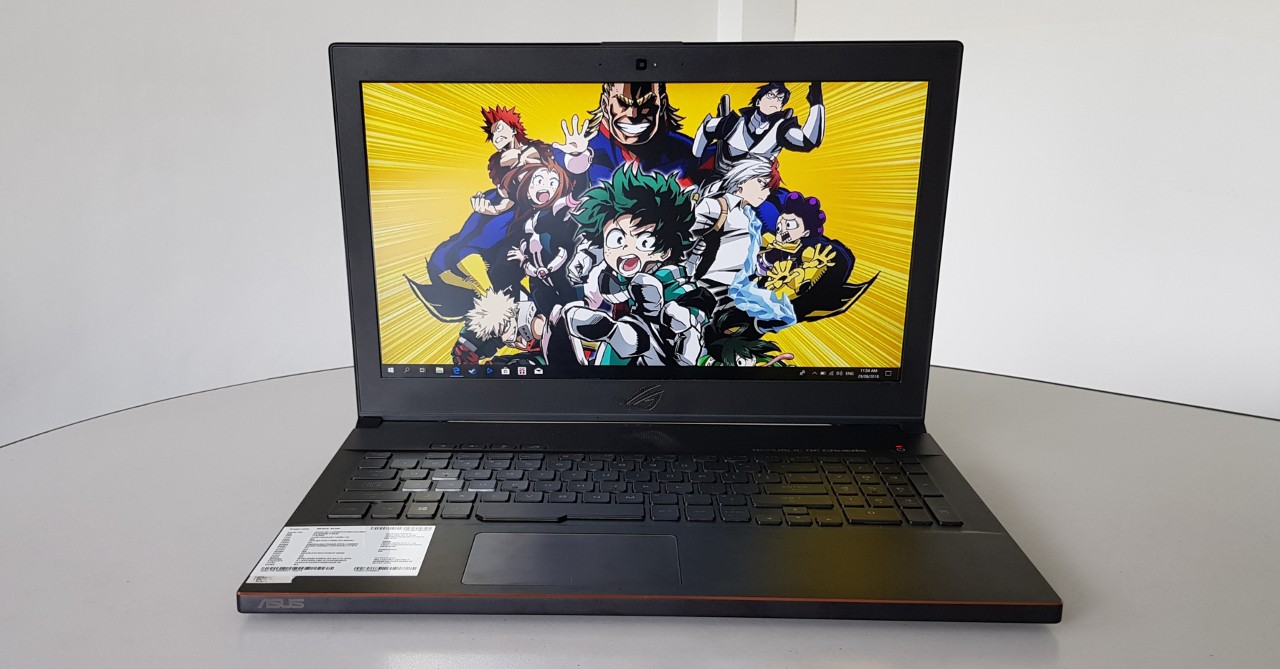 The ROG Zephyrus M is one of the best gaming laptops in terms of pure performance. Thanks to its beefy internals, it can play any game you can throw at it, plus it’s packed with a top-end display that’s also great for binge-watching anime/series. It also has an eye-catching design that’s both pretty and functional, as the underside vents helped it keep cool even in long gaming sessions.

The Zephyrus M does have some drawbacks, the biggest of which is the poor battery life. There’s also the slightly mush keyboard and the lackluster onboard speaker output. These cons may seem minor, but for the Zephyrus M’s price, you would expect nothing but the best.

Overall, if you’re looking for a desktop-replacement gaming laptop that’s powerful yet slim, you can’t go wrong with the Zephyrus (if you can afford it that is). Battery and other minor issues aside, ASUS’ follow-up to the first Zephyrus is a success!

Geek Lifestyle Review: ASUS ROG Zephyrus M Gaming LaptopFrom a pure performance standpoint, the Zephyrus M is one of the best gaming laptops in the market right now. It also packs an amazing 144hz display, as well as an innovative slim and light design. Though poor battery life and other minor cons prevent it from being the absolute best gaming laptop.