Forsaken Project Lead Scott Taylor joins us to talk about the state of the game and much more! | Ungeek TGS 2018

Destiny 2 is officially back and after an extremely rocky start to its campaign, Forsaken has finally given it the foothold it needs to lure back its community into its arms once again. A couple of weeks ago at TGS, we were fortunate to sit in with a panel interview with none other than the Forsaken Project Lead, Scott Taylor, to talk about all things forsaken and needless to say, we took over the conversation as only we could. Check out some of the bits and pieces of the conversation below!

“it was something that had been toyed with separately not by teams that I was on before, and then we committed to it in the summer before D2 came out… the world was living but we hadn’t had anything of consequence ever happen…” were his words on whether they had decided to kill off Cayde even before Destiny 2. It was interesting, killing off one of the most beloved characters in the game, but a very controversial decision at the same time. While a lot of the players mourned about what happened, that decision brought “life”, so to speak, on the other characters and aspects of the game – Zavala and Ikora’s point of views, Petra’s motivation for her anger, and much more.

Destiny 2 was dying, essentially, and prior to Forsaken, they were in dire straits. Their first season pass with Curse of Osiris and Warmind didn’t work out for them as much as they had hoped for and with Forsaken coming in the way it did, it was the “Warlock Healing Rift” that they needed so desperately. “that Taken King void, I guess that’s… That’s not something we wanted to do, like that was not our… our hope was that Destiny 2 would work so well… and after curse of Osiris, okay we need to insert masterwork cores, we started looking… if you look back, we really wanted to kind of have it build slowly, and have Forsaken, kind of, you know, put a bow on it.”

With Destiny 2 as a whole, the game was much more accessible to all players, much to the dismay of the hardcore community. You could hit cap without raiding, no more random rolls, you know the drill. Forsaken flips things over on its head and somehow, it feels like the Taken King all over again! Its fun, the grind is back, and more importantly, the raid is hard as balls. “We wanted it to be challenging and difficult, and it was more interesting to us to do that than to make it too easy, so the other thing to think about is that the fireteams you’re talking about right now are probably pretty underleveled… it’s also a raid that everyone has a role in, so ideally there are still people that can just go shoot things when they’re told to shoot… we were taking bets and there were people who thought that it would be beat by after 6 hours after it came out, we were also ok with it if no one beat it…”

But people did, and in fact people started doing one man runs with Kallin, the first boss. Also a 4 man Riven run. “All of that has happened since I landed in Japan so I don’t know how the raid team feels about it, honestly… I don’t know how the team feels about it, I assume if it was done in a really cool way, they’d think its awesome…”. It probably wasn’t a design decision to leave something like this out and it’s quite amusing for them that players are finding ways to crack the raid code so the cooler the trick, the better!

So I asked about the lowest hanging fruit…

“So how about those Edge Transits…”

“What about them? You want more of ’em? All I know is that we’re looking into them to see why the drop rates are so… Edge Transit-y.” (Confirmed a bug as of this writing)


“This has become a personal gripe of mine, that raids now have become more… Accessible, that you can hit cap without raiding. You used to show off stuff like Glowhoo and the Vex Confluence and you know that this guy beat the raid. There’s really no prestige in beating the raid anymore.”

“For the first 6 that finished, they got the emblems, I don’t know if there’s any bigger status symbol than that. Something else the players really haven’t gotten to yet that I think you should keep an eye on are titles, I don’t think I’ve seen anyone with titles yet so I think once people start catching on, I don’t think there’ll be a bigger status symbol than when you see someone with some sort of raid title on their head…” (As of this writing, titles may already have been unlocked)

“I loved the Whisper of the Worm quest, any plans on adding more of those secret quest lines?

“We do! We really liked what happened over the summer with Whisper and we’re already working on stuff like that… Nothings more fun for me but on the days that when I know they’re gonna happen, I camp out on Twitter and Reddit and go ‘have they found it yet?’ and it’s really fun… What we wanna do now is to have the community go ‘is there something new today?’ and I think that’s really fun.”

“Curated rolls are back! Did you mean for the old “fun” weapons like fatebringer to make a comeback in Forsaken without actually bringing them back by doing some God Roll type things to the random loot table?”

“I know what you’re talking about, but I don’t know what I’m allowed to talk about. Yes it is a thing, but I have no satifsying answer, it’s a good question, nice try though.”

“Suros projections, plan to do anything funky with them? I feel so much more could be done with those.”

“The ghost images? I agree, something like that has not reached its full potential, I’ll say that. We should keep flying with it, hopefully similar to emotes since it started out, now there’s digital tables being flipped over and roses being thrown around… I don’t know any specific plans on whether they’ll be eververse locked, so we’ll just have to see.” 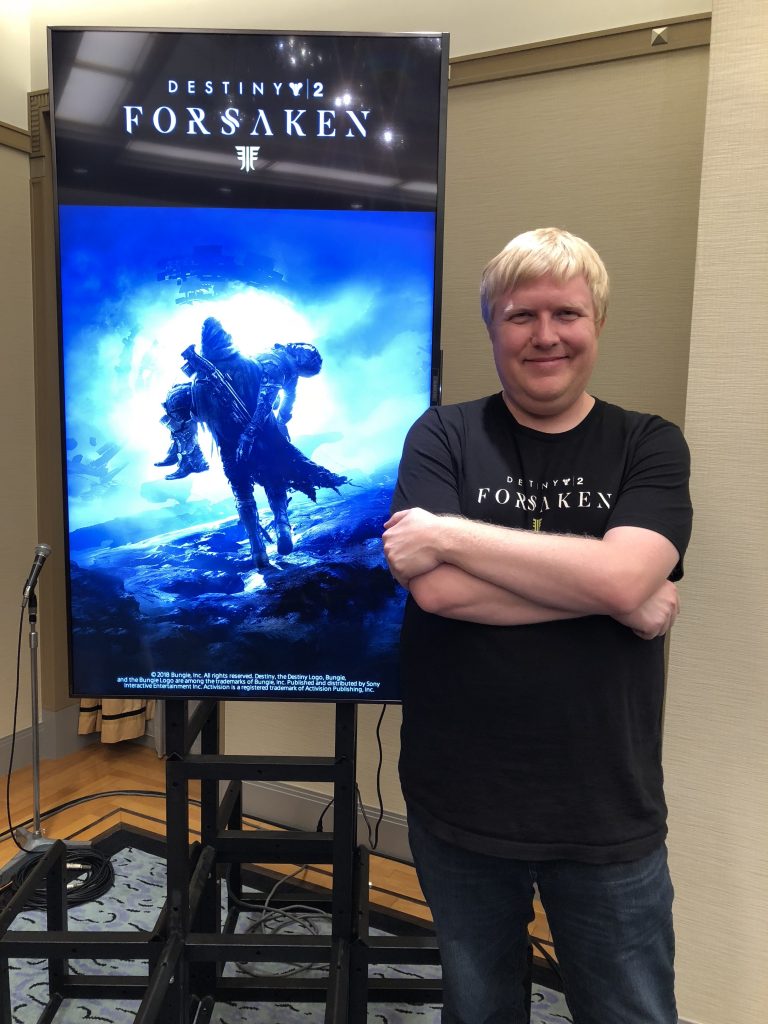 - Advertisement -
Previous articleAnime + Education? Cells at Work shows us how it’s done!
Next articleWith the upcoming Honor 8X, there’s no reason to miss out on your favorite shows