Is the OPPO F9 for you? Click to check our findings. 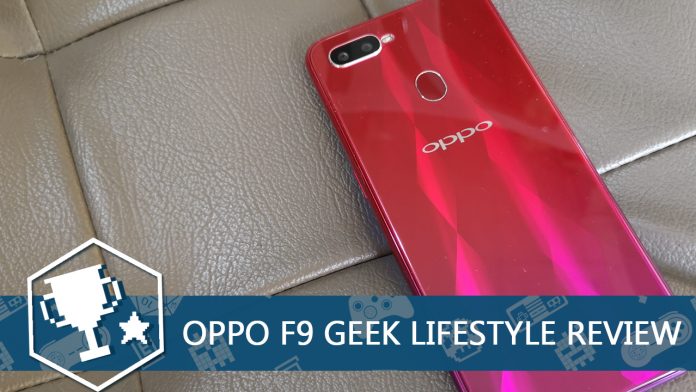 The OPPO F9 splashed through the mid-range scene a couple of weeks back and we here at Ungeek has been enjoying OPPO’s latest mid-range hero since then. That being said, we’re here to tell you if this mid-ranger is worth your hard-earned pesos. 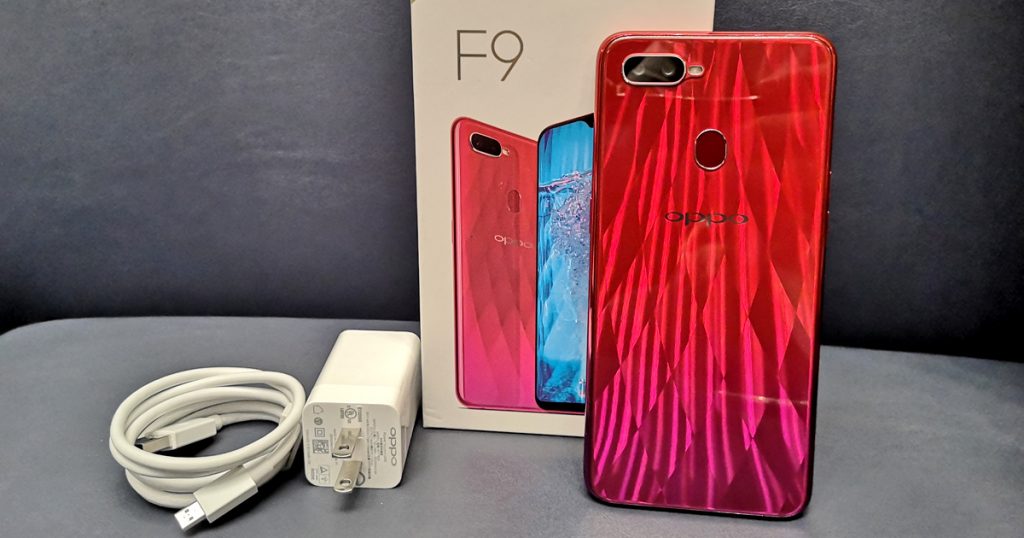 One of the things that caught our attention during the launch of the phone is the form-factor and how beautiful the design of the line is. Unlike its previous iterations of having a couple of safe color options and a special one, OPPO decided sprinkle a whole ton of color throughout the entire line complete with interesting gradient (a trend we’re seeing for phones in 2018) and added the diamond-like effect found on the OPPO F7 Diamond Black.

Initially OPPO launched the F9 with just the Sunrise Red and Twilight Blue but very recently they included Starry Purple into the mix – an exceptionally royal color motif with deep gradient purple running through specs of golds here and there. Absolutely brilliant and delicately beautiful. 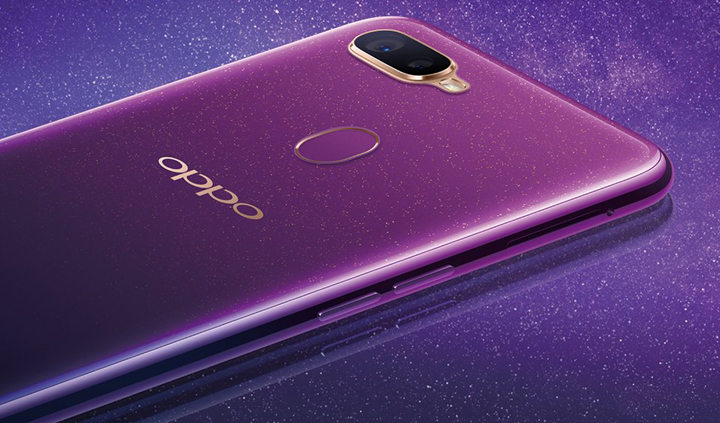 While the the F9 still does not make use of an all aluminum chassis, it does add a nice metal-like finish on the bezels of the phone – one that too is matched with some gradient spray-painting so that the F9’s shimmer looks flawless and seamless. 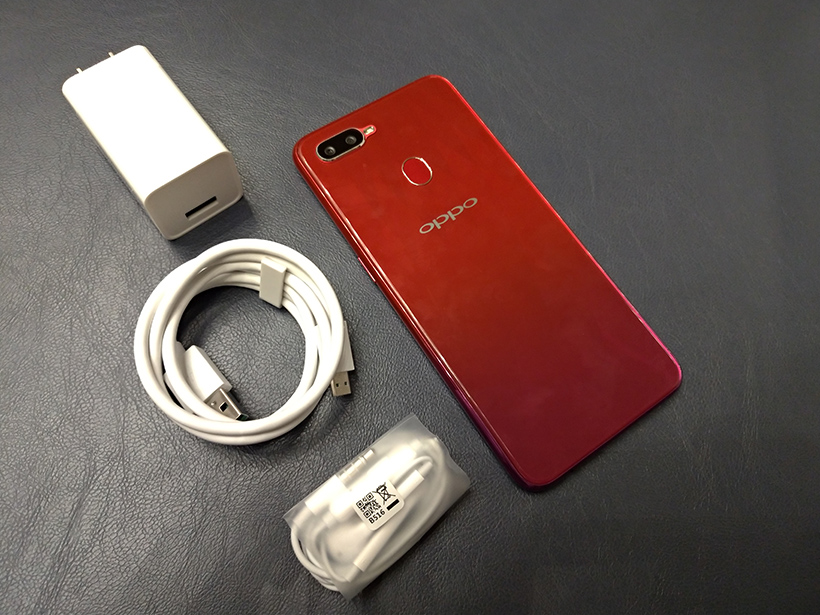 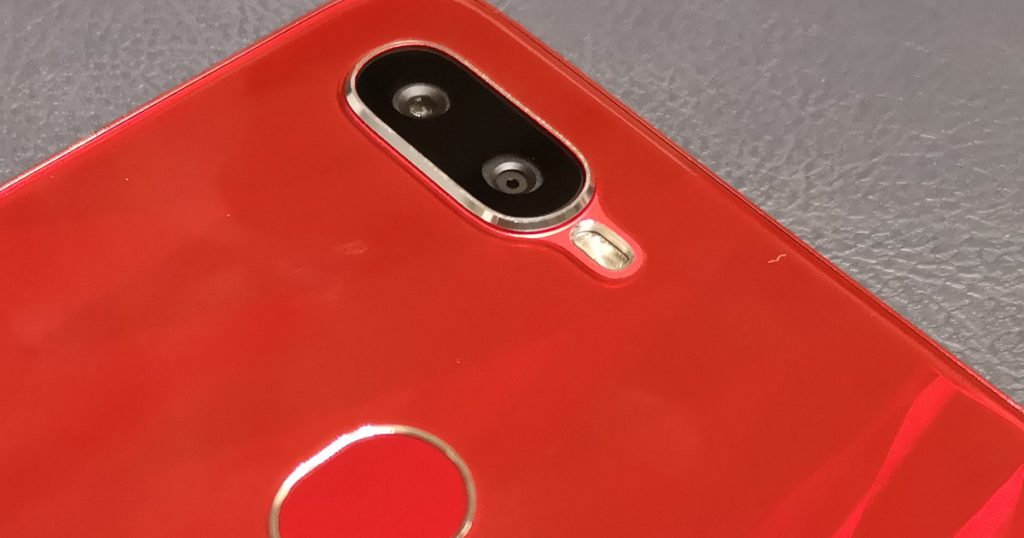 I’m a bit disappointed with the camera feature of the F9 particularly because it didn’t take a huge leap from that of the F7. The addition of the 2MP depth-sensor just so that you can create better bokeh is a nice touch but all too negligible if we’re being honest. Sure, the F7 produced some pretty amazing imagery considering the leap it took from its previous iteration and that’s what we were expecting with the F9. OPPO’s entire brand architecture hinges on its optics and their capabilities – particularly the selfie cam (heck, they’ve single-handedly claimed the selfie expert tagline, and that’s not without merit), so, to have a rehash of a previous model’s optics and hardware seems like a missed opportunity.

Here are some sample photos from the OPPO F9.

With enough light, though, the OPPO F9 can produce pretty dramatic images. The Helio P60’s AI support enables the phone to automatically optimize the photo to suit the situation. Example, when I was pointing my camera towards the cat above, the phone recognized the subject. Since this is AI, the more you use and/or shoot a certain subject, the more the phone learns how best to tweak and optimize the device so you can capture the best moments.

On low-light, well, it’s a different story. Sadly, the OPPO F9 still struggles with low-light conditions, even with AI-support and an Ultra HDR mode (can be toggled on expert setting). If you’re planning on accomplishing night shots with the OPPO F9, we suggest bringing a tripod and/or stabilizer — otherwise you’ll be left with a lot of grainy photos.

Because of the teardrop notch, the OPPO F9 gives you more screen real estate to consume your images and/or movies making this one of the best phones to binge-watch your favorite series. The added real estate also lets you game more efficiently without the notch blocking your command buttons. Playing online is made easier (and in turn more enjoyable, thus you play for longer hours). The 6.3” screen and very close screen to size ratio makes watching thoroughly enjoyable as well! 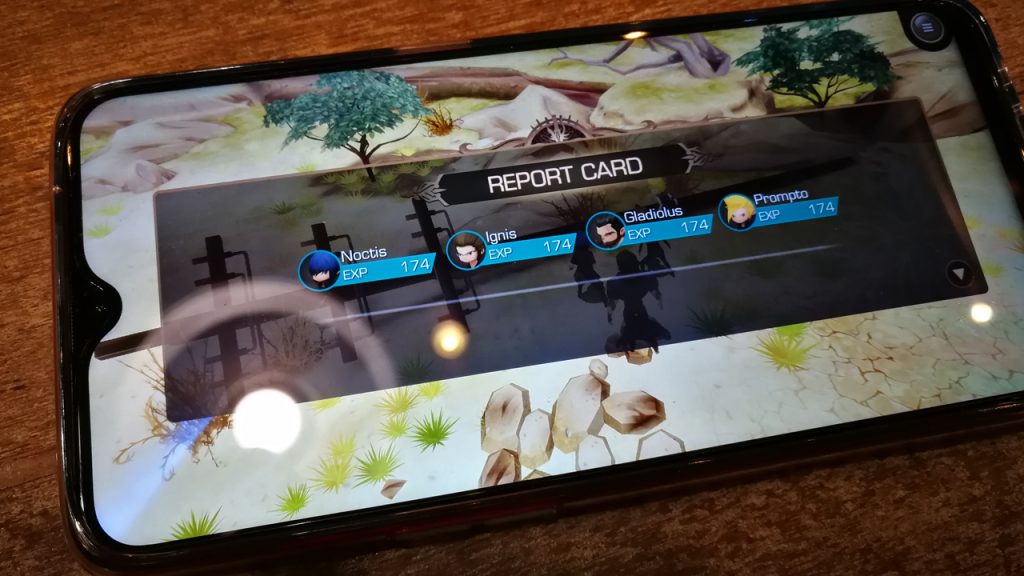 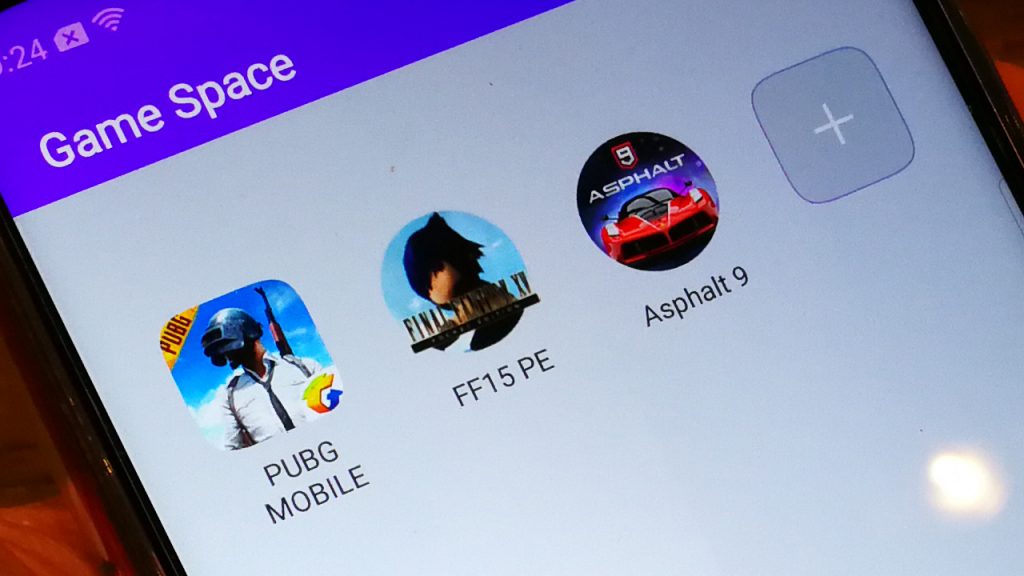 While the display for video gaming is made much better because of the now smaller notch that blocks just a smaller portion of the screen, and the F9 being equipped with 3500mah of battery, I’m sad to say that gaming, on a whole, doesn’t feel as smooth on the F9. I’m actually experiencing more jitters and framerate drops on games that should have been performing way better than the F7. This is despite the F9 having the same MediaTek Helio P60 Chipset and now powered by 6G of RAM instead of F7’s 4G of RAM. 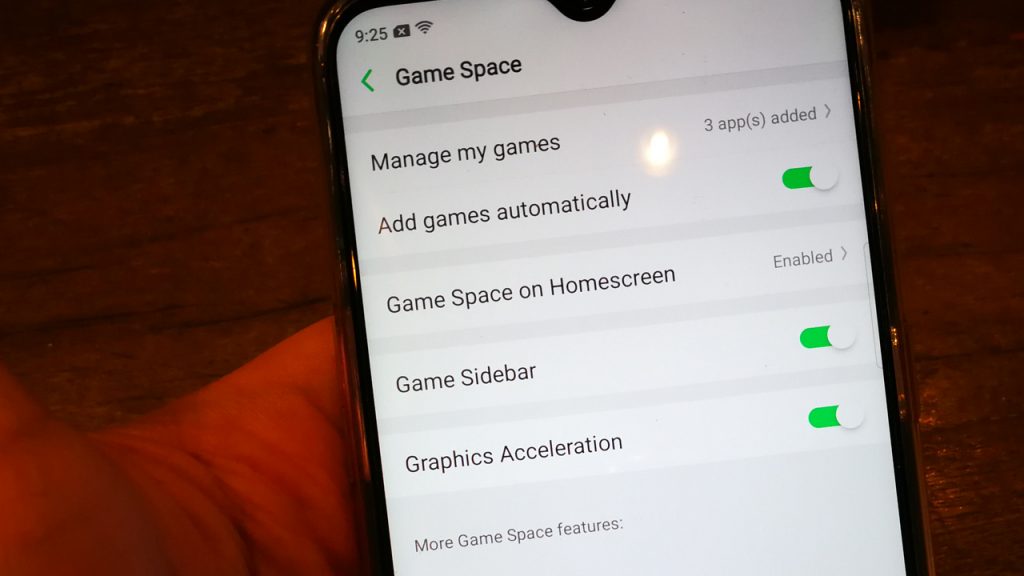 There is a game mode/ center from OPPO that should be able to optimize my gaming a bit more but it only works on certain accredited games like PUBG Mobile. What I do love about OPPO’s Game Space, though, would be the floating controls for you to quickly accept or drop calls/messages and – record your game play footage or share them live. That built-in UI is brilliant, and I wish more phone companies could adapt that. 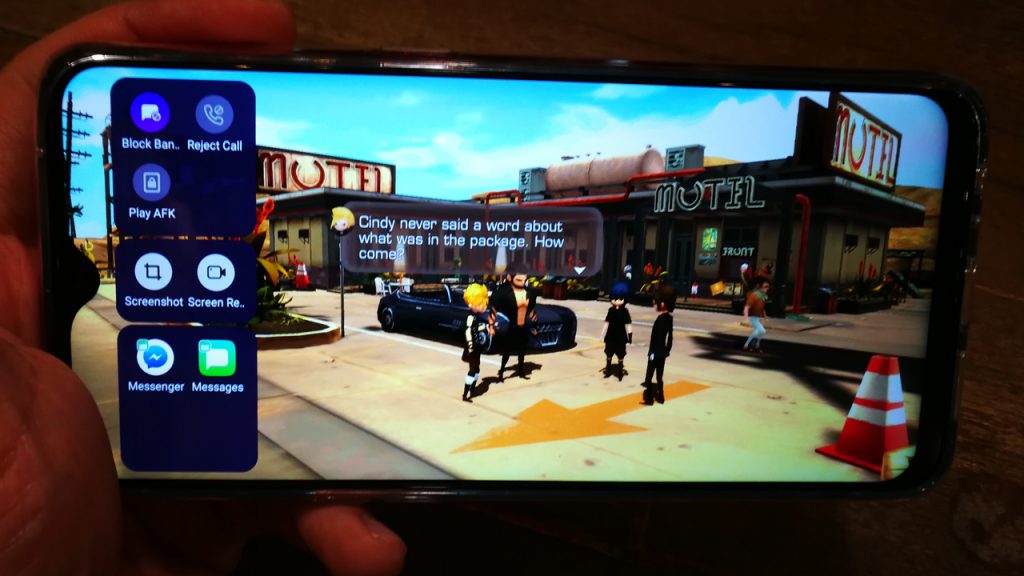 So, kudos on that, OPPO! Just, optimize your chipset to handle gaming, yeah?

With that being said, I’d still give the OPPO F9 a high enough mark for everyday reliability. With a very decent 3500 mAh, a chipset that optimizes power usage AND the capability to charge blazing fast thanks to VOOC fast-charge, the OPPO F9 is a smartphone that will give you amazing mileage with everyday use.

Want to see how much juice a 5 minute charge can give you? Watch this video below:

The batting average is around 10% power in 5 minutes. We got 7% but that’s not so bad and 7% in 5 mins is quite impressive already.

Truth be told the OPPO F9 doesn’t feel like a big upgrade of the F-series. In previous iterations there’s a clear distinction, design-wise and feature-wise, of one product line from its previous generation. The F9 feels like a half-step of what it could’ve been. In a way, the F9 feels like an OPPO F7.5 given the minimal changes that were showcased as well.

At Php 17,990 (the same price as when the F7 launched), the F9 treads on very competitive waters, as it launched in a time when suddenly there’s an influx of mid-range smartphones from other developers, some with more exciting features. That’s not to say that it’s a bad phone though, as the OPPO F9 still delivers on what it promises to do — a great looking phone with decent internals and a camera system that can perform well enough especially with decent lighting.

My only gripe is that the phone doesn’t seem to excite as much as the F7 did (partly because the F9 looks very similarly to the F7 –minus the notch and the diamond back). Here’s hoping the F11 would deliver some much-needed OPPO magic!

Previous article
MSI Laptops for up to 45% off?! Head on over to the PC Express Gilmore Sale happening now
Next article
Wait two Daredevils?! Check out the new trailer for Daredevil Season 3

New look, slightly better internals but more or less a souped-up version of the F7. The OPPO F9 plays it safe instead of pushing the boundaries and taking huge risks. We expected more from the phone company that re-defined the mid-range market. While a decent contender on the mid-range market, the OPPO F9 just fails to excite partly because it was released in a time when a lot of phone brands started pouring in a lot of mid-range options that are at par (if not slightly more nuanced) than the OPPO F9.Geek Lifestyle Review: OPPO F9 | More of the Same