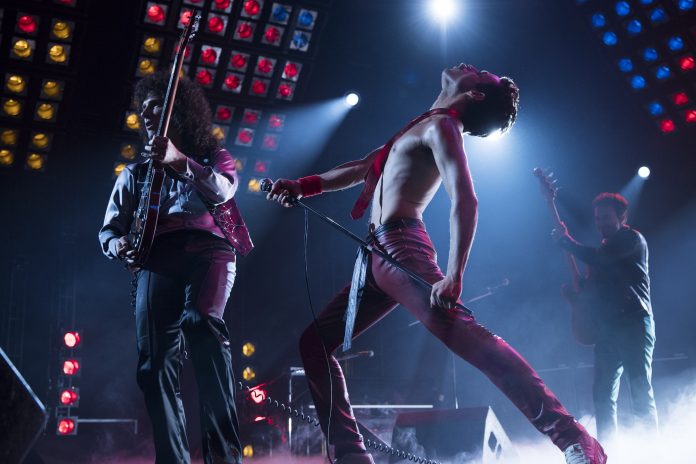 “Oh so they sang that…” was a recurring thought in my head throughout the movie. I didn’t grow up to their music, but since I kept hearing the songs over and over, I knew of it but didn’t figure that it was Queen who performed those iconic tracks. For the 2 hour and 15 minute duration of the movie, I was a bit irritable because a couple of (not so) gentlemen beside me had comments to everything happening in the movie and anybody who knows me knows that I HATE people like that with a passion, but you know what? For the first time, I actually didn’t mind.

You see that’s how well the film pulls you in. Nevermind the pacing problems and the various nitpicks that the critics may have, the film is a celebration of fantastic music and the life of Freddie Mercury, arguably the greatest performer ever to grace the stage and the lead vocalist of the iconic band, Queen. The film did so well, in fact, that after watching it, I had go on youtube to find out more about the band and their hits, as they kept evolving throughout the years. I was hooked to Queen for the time being.

Bohemian Rhapsody is the story of Queen, whose ideal was to inspire the “outsiders”, just like they were, and to continue to dream and become a family just like they are. It was also the story of Freddie Mercury and Rami Malek of Mr. Robot fame absolutely kills the role. It’s like Malek was born to play the part, nailing all of his moves and gestures down to the very last motion, as evidenced clearly in the Live Aid Concert which was one of the best rock performances by any band, ever.

This movie gave me goosebumps, to be honest. I had the strongest urge to sing along to the songs as they were being performed and was quite disappointed that the crowd of movie goers I was with didn’t feel the same way. It would have been awesome to be singing along to hits such as “We are the Champions” and “Love of my Life” with the whole cinema, and it would have been a fantastic experience to actually treat this film as a Rockeoke night of sorts!

An interesting tidbit about the film is that Queen fans from around the world were gathered in one studio to perform the iconic tracks that we’ve come to know and love, including our very own Jugs Jugueta, who you can see in the video above! It was a gesture that I’m sure Freddie Mercury would have appreciated and would have loved to be a part of. Although I took part of the screening thanks to an invite by 20th Century Fox Philippines, this is one of those rare occasions that I wouldn’t mind paying to see the movie again. It’s fantastic and worth your hard earned cash, if only to sing along to the tracks shown on an oversized karaoke machine you can call a movie house.

Catch Bohemian Rhapsody as it opens in Cinemas on October 31 from 20th Century Fox!

- Advertisement -
Previous articleeGG Network, Tamago, and TV5 team-up to bring more esports and gaming to everyone!
Next articleSOLID! Here’s all the Kojima Productions merch you can buy at ESGS 2018!