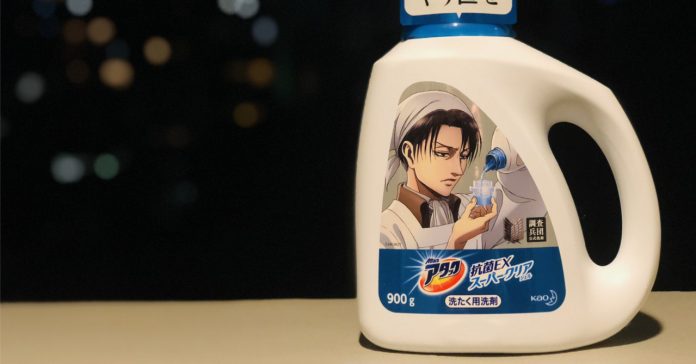 Attack on Titan is undoubtedly one of the most popular anime series in the past couple of years, not surprising given how exciting the show’s action is, not to mention its great animation and memorable characters.

Now if you’re a fan of the series and can’t get enough Attack on Titan merchandise (or if you already have too much AoT apparel and accessories), this is for you! Introducing the Attack on Titan laundry detergent. Yes, that’s a real and officially licensed product!

While this is truly an unexpected collab, it actually works on a number of levels. For one, the detergent (made by Japanese company Kao) is actually named ‘Attack‘, making for some witty wordplay. What’s even better is that the label features fan-favorite Levi Ackerman, a character that’s well-known for being quite an efficient cleaner.

The collaboration started with the detergent company Kao asking its fans through Twitter to vote on a new package design. Thanks to the anime’s popularity “Attack” on Titan detergent won, and was made into an actual product. If you’re thinking of getting one though, chances are you won’t get your hands on a bottle, as the detergent quickly sold out on Amazon.