Closing the year off with a BANG | Just Cause 4 Review 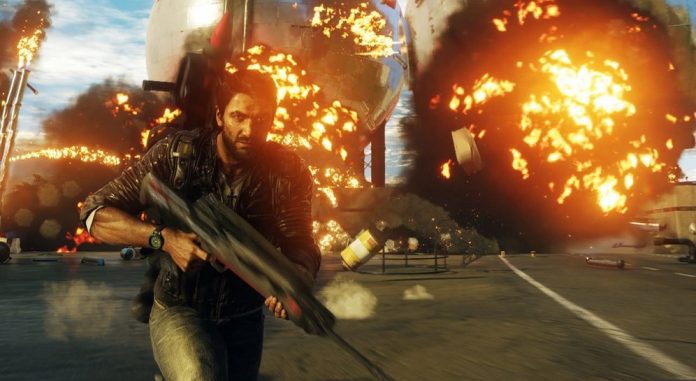 Another installment, another leader to overthrow. It seems that apart from blowing things up, Rico Rodriguez’ favorite hobby is bringing down corrupt despots and in Just Cause 4, we’re not any different from where the first 3 games have left us. Is this a good thing? Maybe bad? You decide but hopefully this review of Just Cause 4 will make the process easier for you, let’s jump right in!

The premise is simple, Rico Rodriguez is back in town to wreak havoc against his next target, Espinosa, as the leader who has been keeping the island of Solis under control using his private army, the Black Hand. With a few surprising plot twists that could have been inspired by some local telenovela show, the plot as a whole is really nothing to write home about. The long and short of it is that if you plan to play Just Cause 4 for the story, then you’ve come to the wrong place, buddy. Not only is the story uninspired, in general, it’s really not the reason the Just Cause series is still “alive” right now. I would like to believe that there are many more just like myself that did not play the previous installments for the plot, but for the insane over the top action, which we’ll get to next. The long and short of it is that we won’t even venture into the story, because you’ll forget about it 15 minutes into the game anyways. At least I did, and it honestly didn’t diminish the fun from the game one bit.

Now that we’ve gotten that out of the way, let’s talk about what makes Just Cause, well, Just Cause. If anything, the game knows how to make a mess of the world around you, in a good way, as chaos and destruction is really what sets Just Cause apart. Similar to a game from way back called Red Faction, where you could nearly destroy everything in sight, Just Cause is the same in the sense that the whole island of Solis is your playground and being such, you could get very creative with destruction. Armed with his ever trusty grappling hook, you are actually able to tether things together – doors and fuel barrels for an explosive entrance or maybe a person and a windmill for uh… a makeshift ferris wheel? If there’s anything I love about the series, even in its past installments, is that Just Cause has been and will always be an unapologetically mindless fun game where anything and everything you would want to do without consequence is mostly possible.

Just how creative can you get in Just Cause 4? Well to help you out with that, your grappling hook has some modifications you can unlock as you progress in the game. There are a total of 3 that you can unlock, all of which give different “abilities” to your hook, but you’ll only really use 1 for the most part (trust me). That’s not to say that the mods don’t have their uses – the retractor mod basically pulls tethered targets towards each other and the booster mod, well, boosts them away to God knows where. My favorite mod, the airlift, is basically what the fulton recovery balloon is to Metal Gear Solid 5. Attach the airlift to a car, for example, and depending on your airlift setting, you’ll be able to lift the car off the ground for more of that craziness that Just Cause is fantastically good at. On top of this, you can actually combine all of the mods to and see what sort of destructive contraption you can think of. Fancy a floating tank or a school bus with jet boosters? Thought so.

Rico Rodriguez is absurd in this game that he feels like a god damned superhero, whizzing around with his grappling hook and making a Michael Bay film out of the game while looking slick as only he can. That said, combat isn’t the hardest in the game, and to be honest, unless you’re standing really still for the next minute or so, chances are that you won’t be dying to enemy fire anytime soon. I believe this is not a design flaw by any means, but rather incentive for you to really get creative and see how best you can cause as much chaos before your health bar hits zero. Just Cause knows what it’s good at and it the game does an awesome job at making sure you know it as well.

One highly touted feature of Just Cause 4 is the new extreme weather system, which coincidentally is the exact weapon the Despot Espinosa is planning to use for his evil plans. Seeing it in action is a sight to behold, and paired with Rico’s ability to be ridiculously mobile, things can get instagram worthy real quick. Tornadoes, Thunderstorms, Sandstorms – these are just a few examples of the natural elements you’ll have to face along the way and apart from just looking good, they provide a bit of a challenge as well. Having a tornado nearby will be accompanied by violent turbulence that will throw you around if you’re not careful, you get the drift. More then being just a gimmick, these weather conditions lay out the perfect situations wherein you can practice your destructive tendencies once again when paired with your grappling hook mods. Launching a hapless cow with 10 boosters into that tornado in the horizon? Tell me I’m not the only one who’s thought about that.

One gripe about Just Cause 4 is the false sense of complexity that the map portrays. Within the first hour of the game, you’ll be introduced to the Army of Chaos which you’ll be leading to taking back the island of Solis bit by bit as it is currently controlled by the black hand. Gaining back territory isn’t hard by any means, as you’ll soon see through an interesting, if not mildly confusing tutorial sequence. I was under the assumption that I would be playing some sort of tactical back and forth between territories against the Black Hand but to my surprise, it’s exactly just as simple (and mindless) as the game is – gather squads, expand, take over territory, rinse and repeat. The whole game is built on a simple premise – destroy everything – so excuse me for wanting something a bit more complex out of this takeover feature.

One thing I will say about the game, despite all the praise about creative destruction, is that I felt the game was better watched than played. Throughout my playthrough, I’ve had a friend watch as I played and surprisingly, he enjoyed the game more than I did. Talk about backseat gaming, he was coming up with all these crazy ideas about strapping boosters to this and attaching balloons to that, utilizing the grappling hook mods to their fullest potential. The game is very streamable, in my opinion, and that makes it a fantastic spectator game, especially when Rico is in the hands of a pro who can maneuver him and pull off crazy stunts with ease. I didn’t enjoy playing as much as my friend enjoyed watching, which is unfortunate, but I’ll give Just Cause 4 credit for being an extremely watchable game.

After all is said and done, Just Cause 4 really just feels like 3 only bigger. Similar to how the Far Cry series has been over the years, Just Cause is a prime example of “if it ain’t broke, don’t fix it”, I guess no one told Square Enix that it’s not a reason to come up with some totally new feature (or featureS) that would make the game feel refreshing to play. Don’t get me wrong, you’ll probably spend 70-80% of your time creatively blowing up stuff that you’ll most likely be too occupied to even care, but that remaining 20% of you will wish that there was something more to it than just that. It is by no means a bad game, in fact Just Cause 4 is a solid, action packed game that defies logic and pushes you to go crazy beyond your limits, just don’t expect anything radically different from the previous games.

Just Cause 4 is more of the same old formula slapped on with a shiny (-ish) skin. That could be a good thing or a bad thing, depending on whether you’ve grown tired of the gameplay or are seeing this for the very first time. Newcomers to the series will fully appreciate what JC4 has to offer and will waste so much time with all of the chaos that you can create within the game. You’re only limited by your imagination so let loose and unleash hell on Solis, Just Cause.

*Just Cause 4 was reviewed on the PC and PS4 Pro via a review code provided by the publishers.