Meet the Philippine representatives for the Lenovo LoC 2019, Team ArkAngel 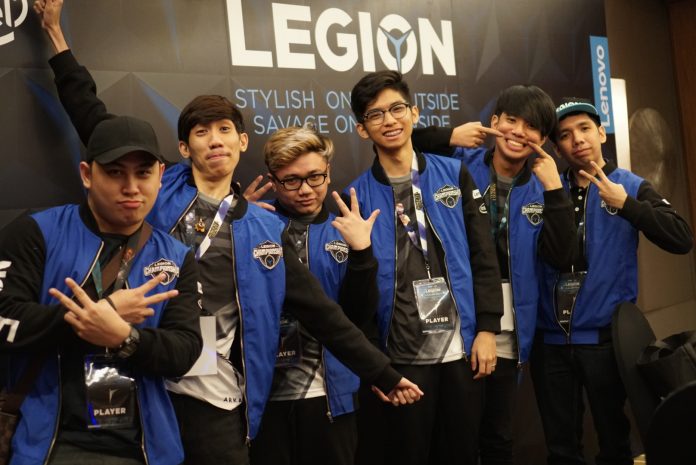 By the time you read this, Team ArkAngel will be engaged in a series of battles with the best teams in the Asia Pacific region, all for the glory of winning Lenovo’s annual Legion of Champions tournament. With a prize pool of 35,000$, these guys are giving it their all for pride and passion and we got a chance to talk to them before their big matches to know a little bit more about the people behind the avatars. 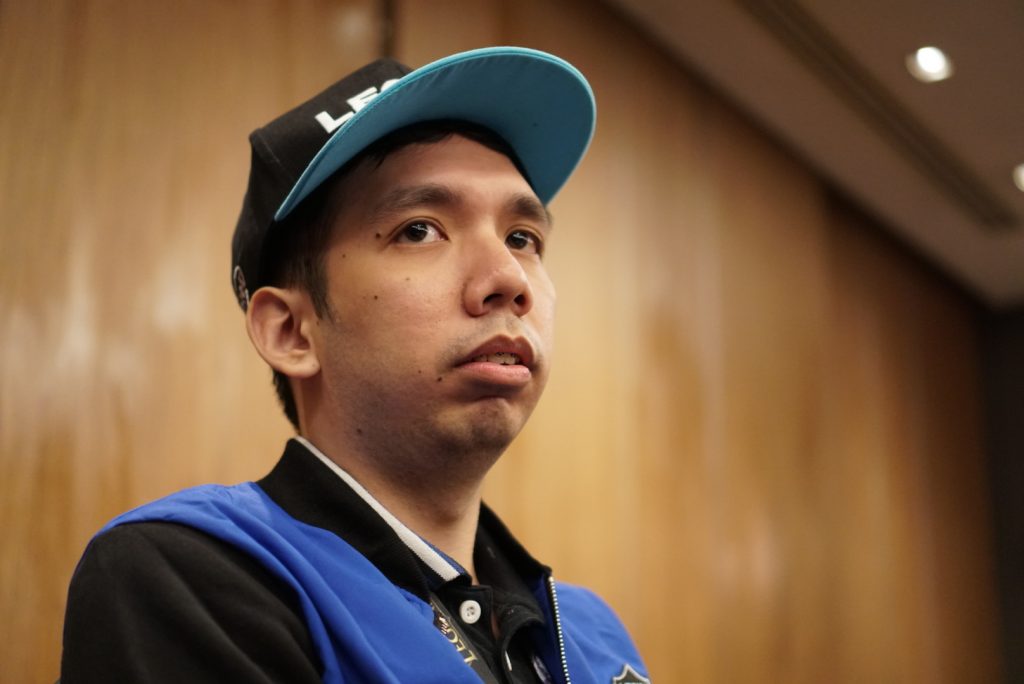 “Ikaw yung andiyan eh, ikaw na mauna!” everyone jeered. “Sige sige, Kurt Cristobal po, ako yung Jungler ng ArkAngel for this tournament and favorite champion ko po si Kindred…” says the soft spoken member of the team, who turns out to be a sub since their other teammate could not make it to the tournament. He’s been with the team for just a short period of time but their confidence makes it seem like they are out to win it all despite playing with a stand in. He also likens himself to Sejuani, stating “supportive siya eh, tumutulong siya sa mga kakampi niya, nakakarelate ako sa kaniya kasi ok lang na sila na yung bida tsaka kahit ako na yung sumuporta sa kanila”.

“Ako si Jyro Pascual, captain ng ArkAngel LoL, role ko is bot lane and favorite champion Riven.” “Boss amo po namin, ser!” the others joked. The captain simply laughs, but he knows he has a big responsibility to be cool and calm for the team because everybody is counting on him to be the leader of the team. They are a relatively new team in the scene compared to institutions such like Mineski and other high profile names, but these players have as much experience and heart as any pro out there, maybe even more. “Feel ko Riven talaga ako eh, para magkapera asim talaga kailangan nun eh, eh sobrang asim ko maglaro.” he quips.

“Ako po si Jordan Pamintuan, ang role ko ay support, ang favorite champion ko is thresh.” A stark contrast from the captain, Jordan is very quiet as well but has that conviction of being the member that the team counts on the most to get them out of a sticky situation. Just like his role in the game, his impact is not as obvious but it is his intangibles that make him integral to their success. Somehow, for a guy that seems the most peaceful, he gives out an unexpected answer when asked who he thinks he would be as an LoL champion. “Si Thresh, kasi pag mainit na ulo ko kaya ko nang sakalin yung kalaban para tapusin na yung kalaban, tsaka kung kelangan naman ng suporta, kaya ko din yun.” 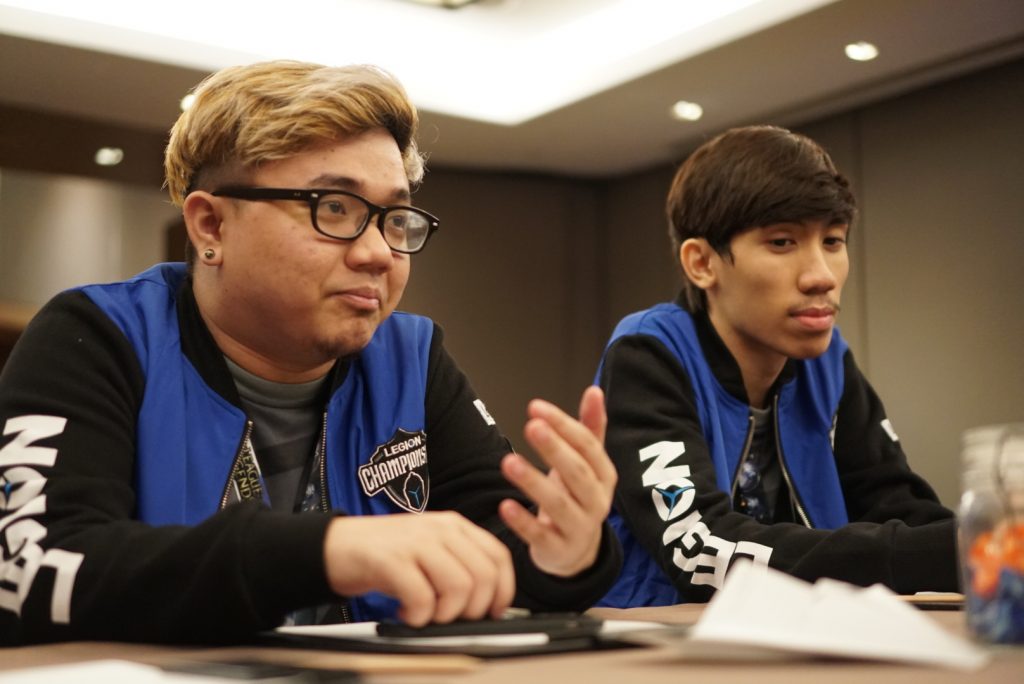 “I’m Robert Mansilungan, ang role ko ay midlane, ang favorite champion ko ay si LeBlanc” says the confident and sheepish hero of the team. Midlaners play a very important role in the team and based on his demeanor, he’s not one to shy away from a challenge and is always ready to take the fight to his opponent. His smile is deceiving, as his opponents will soon find out. “Ako si Twisted Fate kasi travel, mahilig mag teleport.” jokes Robert, as his teammates let out a laugh that implies that he might go somewhere during the night to rechage. “Quiet lang tayo diyan, pampalakas yan para sa laban.” 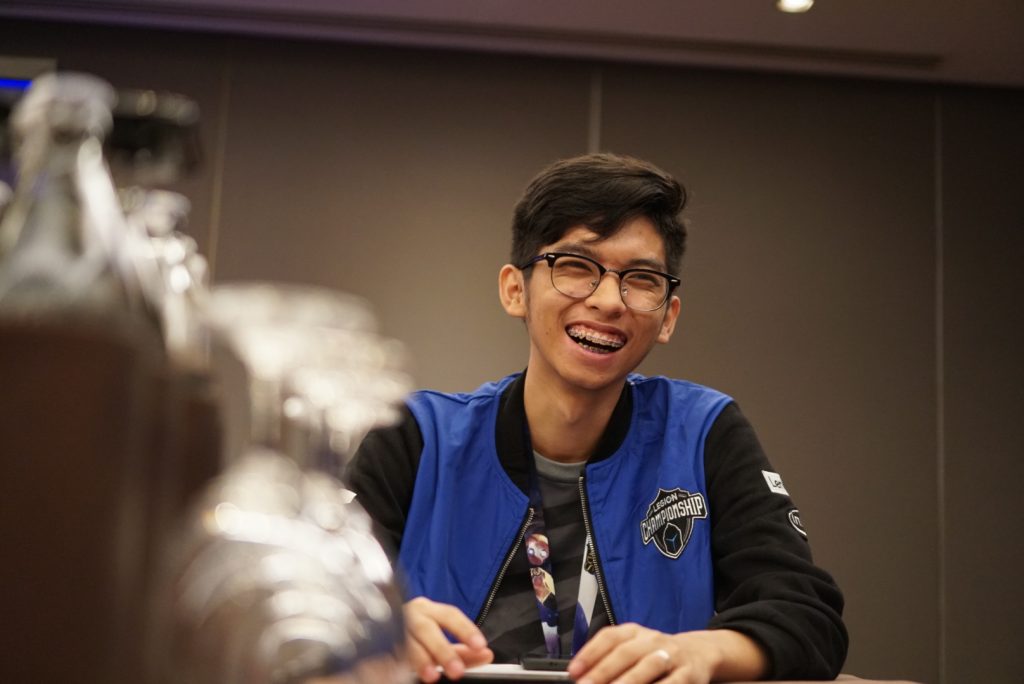 As the last member of the team to speak up, Cedric makes his case as a definitive “last but not the least” type of guy. “Ako si Cedric Santos, toplane, ang favorite champion ko ay Riven at Irelia.” he says with conviction. When asked who he felt was the champion who reminded him the most of himself, he chose Akali, “kasi siya lang yung ginagamit ko sa top na mala-ninja, favorite ko kasi Naruto”. Whatever that may mean, we may have to find out, but everybody seems to poke fun at the fact that he seems disappear at the most opportune times.

Their manager looks over with pride, seeing the team as a force to be feared when the matches start. “Bida bidahan yan!” as everyone lets out a hearty laugh but under that guise is a man who has the team under his control and does everything to steer the team in the right direction. 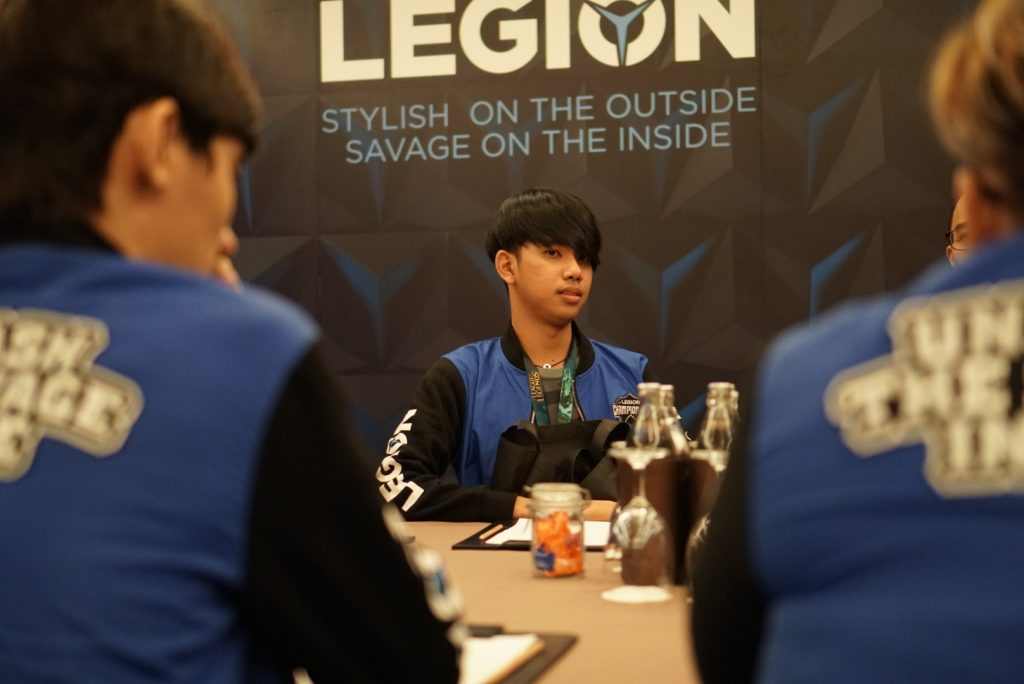 Team ArkAngel poses a very unassuming facade, one that looks like you may treat them as the underdogs but from what they’ve shown, coming from a grueling 5 game series to win the PH qualifiers, is that they can adapt to any situation that is called upon and they treat every opponent with respect. “Finals, nahirapan kami, umabot ng game 5 eh, medyo kasi same picks kami ng kalaban namin… Mahirap din kasi talaga magprepare para sa best of 5 kasi normally sa practices naman  best of 3 lang, so parang will mo na lang eh, every game usap lang kayo ng team tapos cheer up cheer up lang.”

“Kilala sila, pero di sila ganun nakakaabot sa finals, medyo underdog.” when asked about their opponent, obviously referring to the team that took them to a full finals set to beat but even though they won, you could feel that respect coming from them, like it could have gone either way but they still felt grateful to have come out on top and represent the country in a very prestigious international tournament. 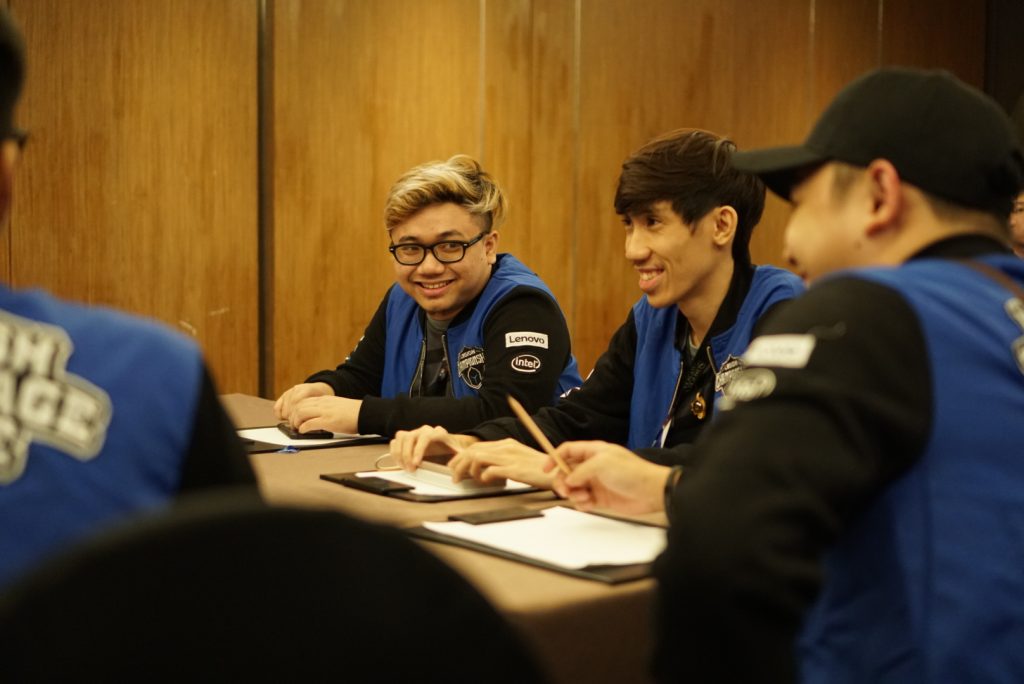 Out of the 12 teams in the Legion of Champions competition, even coming from a team that is supremely confident, they singled out one team that they’re on the lookout for as someone that could pose a big challenge to them. “Thailand.” they said with certainty, “kasi yan yung parang super lineup nila eh, parang nagmerge yung team one and team 2 nila dun tapos kinuha pa nila yung jungler ng Malaysia.” Thailand seems to be their biggest threat, especially with the event being held in the heart of the city, but the hometown crowd seems to be the least of their worries. “Di gagana yan.” the captain spoke. We did win Miss Universe in Thai soil, right? “Wala yan, kayang kaya natin yan.”

Confidence is something that this team does not lack. Maybe they’ve scouted the others well enough, or maybe they just know. But if there’s someone who knows the team better than anybody, it’s their manager, which led us to asking him how much he knew his players. 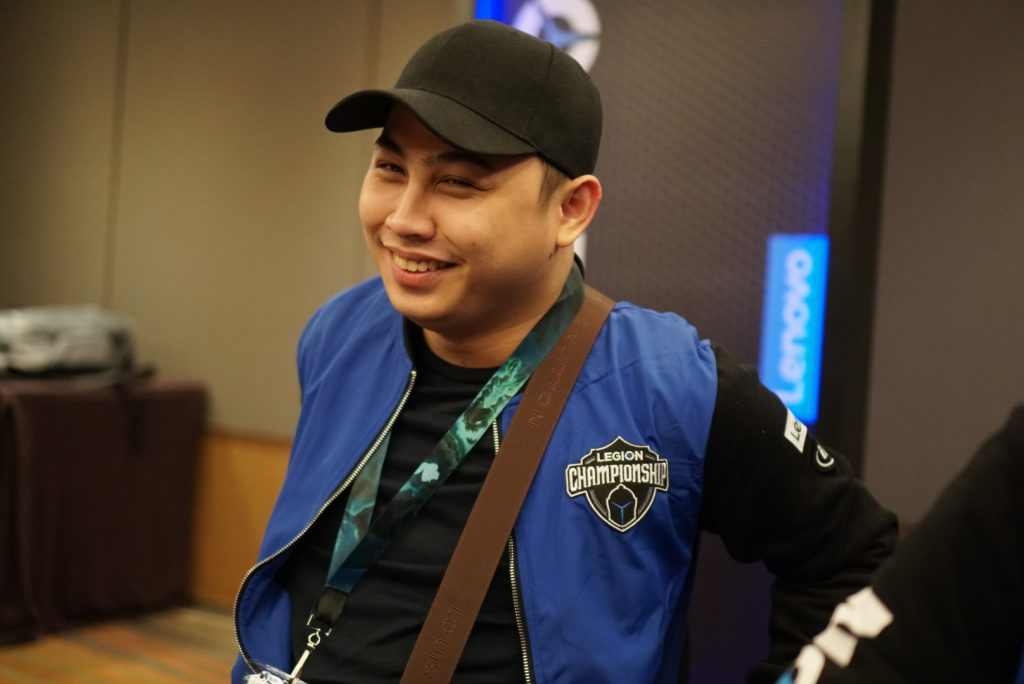 “Fast talk ba to? Sex or Chocolate?” he announces as everybody laughs but at the same time is eager to find out who the manager would point at.

“Ito, si captain! Hambog yan eh” when asked who the strongest trashtalker is. Jyro gets singled out by his manager, but as captain sometimes you need to have that swagger to motivate your team to do more. It’s a role perfect for him, as his manager knows full well.

“Feel ko ito eh, si boy tele, nasa loob ang kulo nito” as he answers the next question of who is the quiet type that would burst at anytime, pointing to Robert as everyone agrees and gives out a laugh.

With the next question asking who was the person who ate the most, everybody gave out a unanimous “Si Cedric yun… Sa gitna ng practice biglang nagsasabi yan ng gustong kainan kahit sarado na. Maski allergic yan, kinakain yan.”

When asked who was the “Kuya” and who was the “Wag po koya / chickboy” of the group, everybody pointed to the captain, Jyro, as the one they would turn to when they had problems, staying true to his role in the team.

As a last question, we asked them who was going to take time to get some famous Thai Massage while in Bangkok, “Inaantay lang namin magising yung boss namin tapos game na!” as they all exclaimed and laughed at the same time. 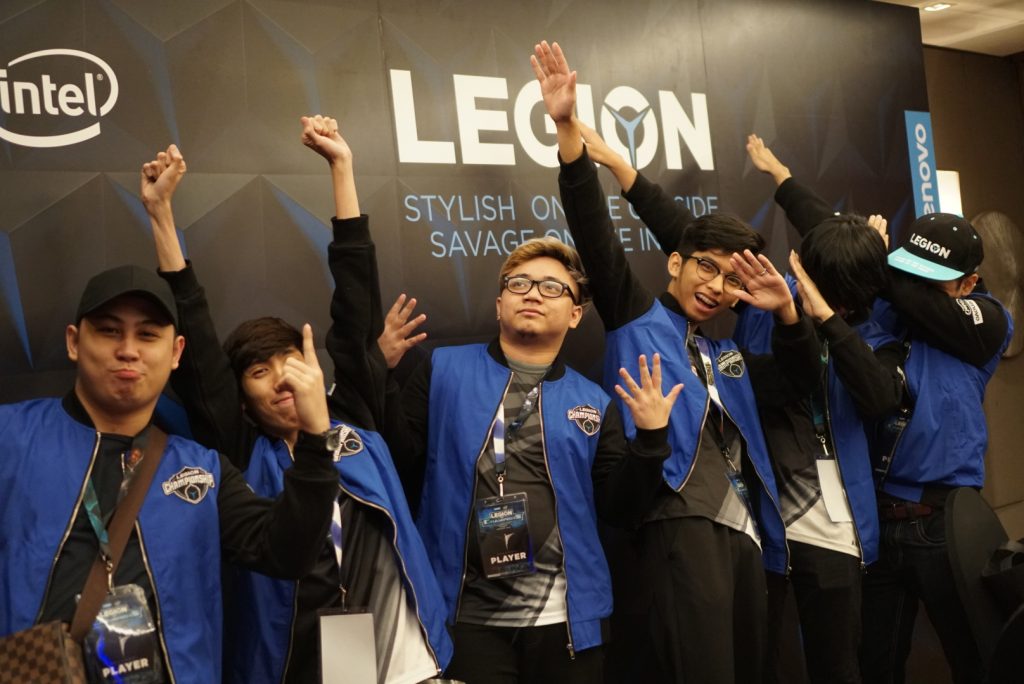 These guys really know how to have fun and know what it means to be a team. They know each other like brothers and are confident that their skill and experience will give them an advantage as they head into the event. They also gave a strong promise to the Filipino fans, as they requested “Sumuporta lang sila, kasi di namin bibiguin yung suporta nila sa amin, gagawin naman namin lahat ng makakaya namin.”

As of this writing, it is unfortunate that they have been lumped into the group with Team Thailand, the one team they singled out to be probably the toughest team to beat, but being true to their team name, all they can do is smile and make their game do the talking. After all, that’s what ArkAngels do, they fly high.

- Advertisement -
Previous articleUPDATE: Mario Kart is coming to mobile in Summer 2019
Next articleBooths that got us geeking out at Taipei Game Show 2019!