Best keep your eyes on these two shows! 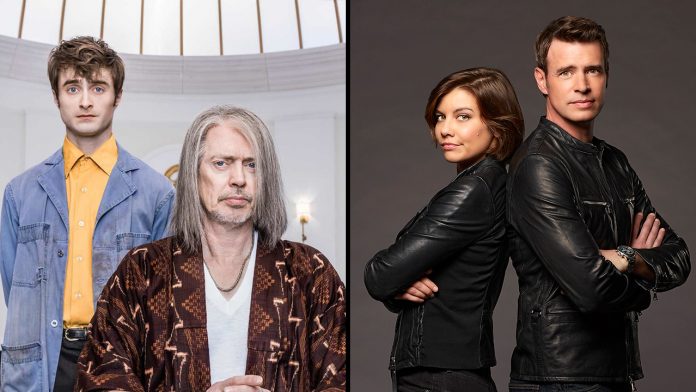 On February 15, Warner TV treated us to a preview of the first episodes of both their upcoming titles ‘Whiskey Cavalier’ and ‘Miracle Workers’. After the preview, I just gotta say, I think both have great potential ESPECIALLY one of the them (which I’ll get into in a bit). So before these babies comes out on Warner TV on SKYCable Channel 34 and Cignal Channel 235, here are our first impressions on both of these titles!

Out of the two titles, I have to say that this is the one I’m looking forward to THE MOST. The series has that whole spy flick feel (which I enjoy a lot) but has light comedic moments every now and then. The 2 main leads – Scott Foley and Lauren Cohan – have SPECTACULAR chemistry and they definitely work well together. As you can tell from the trailer, the premise of the show is that Will Chase AKA Whiskey Cavalier (Scott Foley) is an FBI Agent who is fresh off a break-up and is an emotional wreck. He then encounters CIA Operative Francesca “Frankie” Trowbridge AKA Fiery Tribune (Lauren Cohan) who he initially squares off with due to a mission conflict but ends up working together. The rest of the show follows their adventures as they try to work together through normal office stuff all the way to save-the-world kind of missions.

There was a proper balance of epic action as well comedic banter between the 2 leads. The show definitely had me totally invested and I can’t wait to see where the show goes from here. Just to reiterate, I did only see the first episode and while that does mean there’s a risk of the series not keeping up for the rest of the season, it’s first episode definitely sold me to the idea to keep this in my immediate watch list.

Miracle Workers is a show with quite the amusing premise. It’s about how, up in Heaven Inc., God (Steve Buscemi) seems to have grown disillusioned with how things presently are in Earth and is on the verge of just blowing up the world. It’s up to Craig (Daniel Radcliffe) and Eliza (Geraldine Viswanathan) from the Department of Answered Prayers, along with all the other angels in Heaven Inc., to change God’s mind.

While Whiskey Cavalier totally wowed me, Miracle Workers was okay but DOES have great potential. I found the premise a bit predictable (what the nature of the bet is at the end of the first episode) and I found myself thinking “Yup, it’s one of THOSE”. However, what piques my curiosity about Miracle Workers is the power of the cast. I mean, Steve Buscemi alone can do huge contributions to the show’s strength. I’m interested how Daniel Radcliffe, on the other hand, will play this. Talented as he is, I do feel that he’s been typecasted HARD into the Harry Potter role so I am curious how he’ll differentiate himself in this role. With all that said, THE BIGGEST SURPRISE FOR ME came in the form of Geraldine Viswanathan. I had NO IDEA who she was and this was my first encounter with her work but, in the first episode, this girl CARRIED the show. She made Eliza to be highly expressive and just made the character so interesting to watch.

Normally, Miracle Workers is a show that would be just okay with me but, like I said, the cast strength may just make this show blow up.